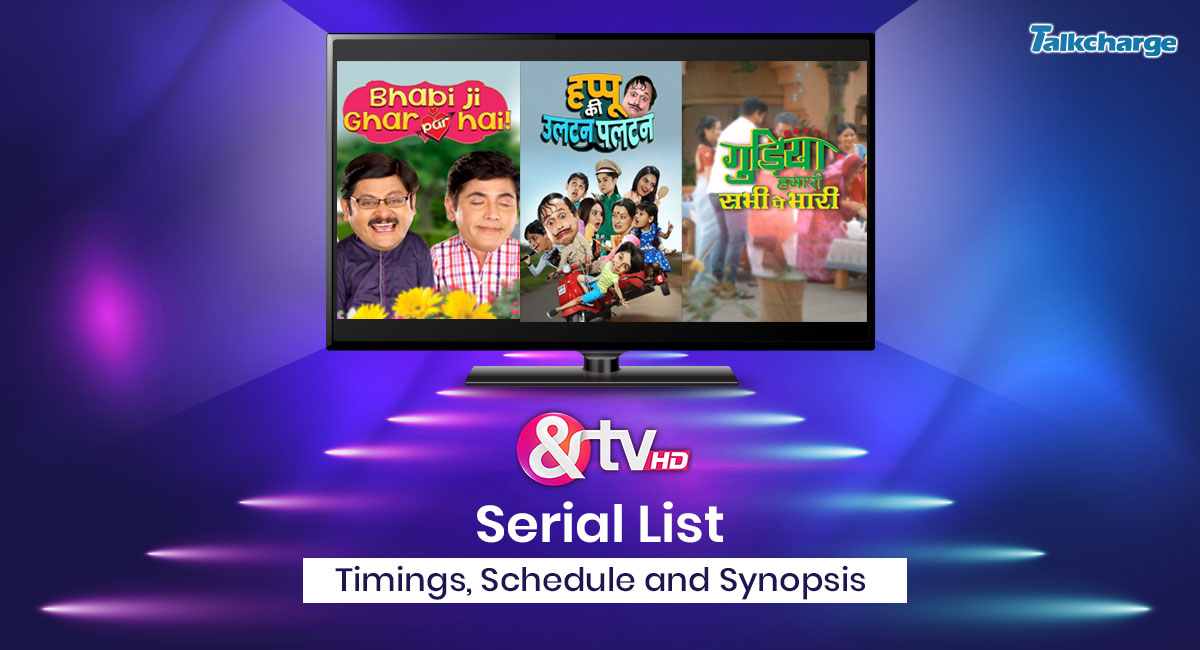 Launched in 2015, & TV is among the famous Entertainment channels in India. The channel is backed by Zee Entertainment Enterprises. It was introduced as a general entertainment channel. The channel showcases a comprehensive number of fiction and non-fiction serials. Its popular shows include Bhabhi Ji Ghar Par Hai, Aur Bhai Kya Chal Raha Hai, and many more. Here we have presented &TV serials list along with its timings, show days, and synopsis of every serial. We have also shared some of the classic &TV shows that have gained huge popularity over the years.

And TV Serial List 2022 with Time and Shows Days (Morning)

If you are a fan of Mythological programs, then the latest show ‘Baal Shiv’ will surely win your heart. This And TV serial is one of the top-rated mythology series ever telecasted on television. The show started in November 2021 and is still running now.

The story of this &TV show revolves around the mythological journey of finding the foundation of 52 Shaktipeeths across India. It also explores the mystical connection to one and only Bhairav. This serial is produced by the famous producers who also made the Mahadev and Siya Key Ram series.

This sitcom is inspired by the classics of the 90′-Shrimaan Shrimati. Bhabhi Ji Ghar Par Hain features two couples- Tiwari’s and Mishras. Where Mishras have an urban background, Tiwari’s are not so urban. The husbands, i.e., Vibhuti Ahuti Narayan Mishra and Manmohan Tiwari, are attracted to each other’s wives- Anita Vibhuti Narayan Mishra and Angoori Manmohan Tiwari. Since its launch, this light-hearted comedy show has garnered positive reviews. This is one of the top-rated And TV serials. Bhabhi Ji Ghar Par Hai show timings are 10 PM, and you can watch it from Monday to Friday. The channel also has old episodes that would be a perfect start for watching the serial if you haven’t watched it yet.

Starting in March 2021, Aur Bhai Kya Chal Raha Hai is the latest name to be added to the &TV serials list. The comedy-drama is about two culturally and ideologically opposite families- Mishra’s and Mirza’s who have to share the same roof. Tune in to the channel at 9:30 from Monday to Friday to know what these families are up to!

The recently launched Ghar Ek Mandir Kripa Agrasen Maharaj Ki is the new entrant in the list of & TV Serial list. The show revolves around Genda, the ideal bahu of the Agarwal family. She is a firm believer in Agrasen Maharaj. After her marriage, her family suffers from a financial loss, and her husband is diagnosed with epilepsy. However, she does not lose her belief in the legendary king and tries her best to get her family in good shape. The show premiered on 10th August 2021 and is aired at 9 PM

Mauka-E-Vardaat is an anthology of stories that narrates stories of heinous crimes. The show is hosted by ace actors and performers like Sapna Choudhary, Manoj Tiwari, Ravi Kishan, Mona Singh, and Piyush Sahdev. This &TV show started on 9th March 2021 and is telecasted from 7:00-8:00 pm.

This & TV serial is a spin-off of Bhabhi Ji Ghar Par Hain! It revolves around a corrupted police officer and his family. The show’s protagonist is Happu Singh, who got immense love in Bhabiji Ghar Pe hai. The show has his wife, mother, and kids who are too different from each other. Singh is continuously the problem due to the rivalry between his mother and wife. Happu Ki Ultan Paltan episode timing is 10 pm to 10:30 PM.

Next on the And TV serial list is Kahat Hanuman Jai Shri Ram. The show is a Hindi Mythology that focuses on lord Hanuman’s childhood. It features fascinating and adventurous tales from lord Hanuman-who was a devotee of Lord Rama. The show teaches moral values and is apt for all ages. Actors like Sneha Wag, Ekagra Dwivedi, and Nirbhey Wadhwa are part of the show.

Dr. B R Ambedkar is an untold story of Dr. B R Ambedkar- the founding father of the Indian constitution. This &TV show includes inspiring parts of Ambedkar’s life. It currently focuses on the childhood stories of Dr. BR Ambedkar. The show will soon take a long leap, and the story will be shifted to how the Babasaheb brought a revolution to the country.

Raat Ka Khel Saara is aired on weekends- Saturday and Sunday at 8 PM. The show is an anthology of stories that revolve around people who experience paranormal activities. The serial is also telecasted on Live apps like Zee 5. Currently, it is one of the top-rated And TV serials.

It is a comedy-drama that revolves around a Goofy girl-Gudiya. She is an ordinary free-spirited girl whose family is on look on for her ideal husband. After being rejected by some men, her family gets a suitable boy for her, but is that boy ideal for her? Find out on Gudiya Hamari Sabhi pe Bhari, only on & TV.

Laal Ishq is one of the romantic-horror series aired on & TV. You can watch the serial at 10 PM. It features numerous stories about mysterious events and life of different couples. Each episode of the serial starts with a new story. This show comes to the top of the And TV serial list. The show has also featured love triangle stories that have supernatural suspense. The show has received a positive response from its audience.

Santoshi Maa is a mythology series that started in the year 2015. The title role of Maa Santoshi is played by Gracy Singh. It has other eminent actors like Debina Bonnerjee and Ratan Rajput. This And TV series has three parallel tracks, which include the story of Santoshi, who is a devotee of the goddess Santoshi, another story is based on the Devaloka, where all the gods reside along with Santoshi maa, and the third story revolves around Santoshi’s relatives who are greedy and not good to her.

Gangaa- Saagar ki Ganga was launched in the year 2015, and after a successful run of 2 years, the show ended in 2017 after completing 595 episodes. The serial was based on a young girl who was married very early to her wife. However, her husband soon dies, and she is forced to lead a wife of a widow. After all the struggles, the girl finally gets all the happiness after marrying her love of life. This And TV serial went under the makeover. It enjoyed a vast TRP and won many awards.

Badho Bahu was about an overweight girl who is fondly called Badho. She is a sweet girl who has been a victim of body shaming time and again. On the other head, Lucky Singh is a well-known wrestler and a charmer. Following a series of events, Badho and Lucky get married. The story then shifted to their married life. It was one of the best And TV series. The TV series has been aired on channels.

Begusarai is a quirky place in Bihar, where Phulan Takur lives with his family. It is a place where money and power speak volumes. The show took a

leap and cantered on Bindiya Thakur and her five sons, who are groomed to rule the land of Begusarai. The show was top-rated, and enjoyed colossal TRP.

Razia Sultan is one of the best And TV serials. The show got a huge success owing to its distinguished story. The TV series was inspired by the Razia Sultan-one’s real-life of the female ruler of the Delhi Sultanate. The show focused on her life and her struggles. Not many know, but then this &TV series was introduced by Shah Rukh Khan as a Sutradhar.

Another name in the And TV serial list is Waaris. This show features Amba Pawaniya- a Punjabi mother, who raises a girl’s child as a son to maintain the title of his husband and peace in the village. The show was a bold move as it threw light on gender discrimination prevalent in many parts of the country.  The serial was well-received by the audience. The show completed 398 episodes and bid adieu in the year 2017.

This &TV series was a supernatural drama with Tina Datta and Mohit Malhotra in the lead. It was about two people who are madly in love with each other. Soon their lives spin with the entry of the Daayan-who creates havoc in their life. The series was created by Ekta Kapoor and launched in 2018.

We all have heard stories of Vikram and Betal. This Indian TV series was based on Vikramaditya’s life, known as Vikram and Betal, who narrates a series of stories to him. This &TV series aired on and digitally on OTT channels like Zee 5.

This acclaimed program has occupied one of the top positions in the old &TV shows list. The serial began on June 24, 2017, and last aired on And tv in November 2017. As per the plot of this comedy-drama series, Bakula’s family desires Bakula to die. Among all the family members, Mohis is the wide one and adores Bakula Bua the most. Everyone in the family prayed to God that Bakula would die; it happened one day. Now, Bakula has returned to earth as a ghost to get back at her family.

The next name on the And TV shows list is Comedy Dangal. This comedy serial is hosted and judged by the famous comedian Bharati Singh and Anu Malik. The theme of this well-known show is competition between skit comedy and stand-up comedy.

Happy Hours is a popular 2016 &TV serial produced by Essel Vision Productions and Diamond Pictures. This comedy television series shows enthusiastic and talented people who get into multiple avatars and entertain the public.

&TV is one of the top-rated Hindi entertainment TV channels in India. It airs a combination of TV serials that have got immense TRP. The channel was launched in the year 2015 in India. It is part of the channels provided by the leading DTH service providers. Most of its shows are now available on Zee 5 and Airtel Xstream.