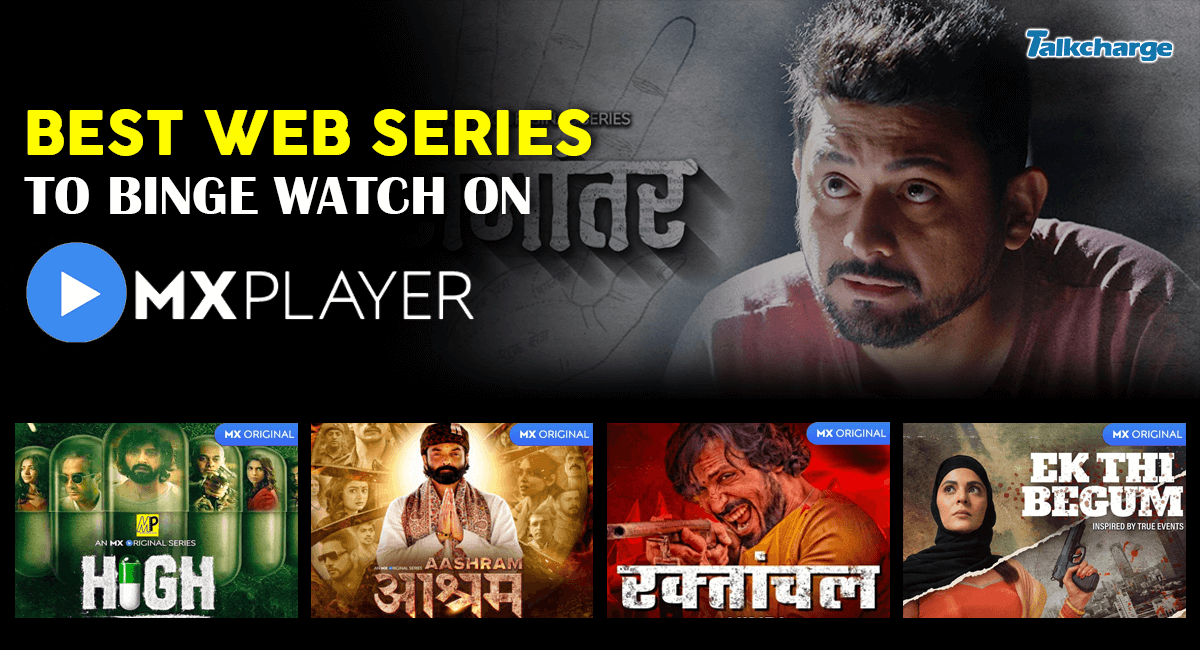 While OTT platforms like Netflix and Amazon Prime rule the roost, many other platforms like MX Player have also started rooting popularity in the country. MX Player gives you access to a wide range of online content that includes, TV shows, movies and web series across genres like romance, crime, mystery thriller etc. Plus, it allows you to download the content offline too! Besides presenting a collection of web series and movies for free, the platform also has a vast array of Exclusive MX Player series. From Aashram, Raktanchal to Samantar, its library boasts lot more worth-watching titles. Here we have shortlisted the 12 best Indian MX Player web series for you to binge-watch. From contrasting genres to various languages this list will surely glue you to your couch for hours!

The recently released web series on MX Player is periodical drama Chhatrasal. The series will take you back during the Mughal Rule which was then ruled by Aurangzeb. It is a story of King Chhatrasal of Bundelkhand, who declared a battle against the Mughal Emperor in order to set his kingdom free. The web series has some of the finest actors like  Ashutosh Rana as Aurangzeb and, Jitin Gulati as Chhatrasal respectively. Watch this interesting series now on MX Player for free.

With ace actors like Nitish Bharadwaj and Swapnil Joshi and an intriguing storyline, Samantar is one of the best Marathi web series. The first season of this mini TV series had nine episodes that revolve around the struggles of Kumar Mahajan (Swwapnil Joshi). The protagonist, aka Mahajan, discovers that a man named Sudarshan Chakrapani has led a similar life as he is living, which encourages him to find the person to get a solution to all his ordeals. The first season was a super hit as it received positive reviews and was appreciated for its storyline and cinematography.

Owing to the success of the first season, the series makers came up with its sequel in which the main star cast reprised their respective roles. All the ten episodes of the second series are as gripping as its prequel.

It’s the extension of the first part where Mahajan receives the diary from Chakrapani and begins to discover what is written next. The series is a sheer delight to watch and keep you glued to your screens until the last scene. Binge-watch this MX player originals on the OTT platform now!

This is yet another one of the best web series on MX Player. The series is divided into two timelines one is from the ’70s, and another is the present-day timeline. In the former timeline, three doctors search for the herb that would help cure Alzheimer’s. In the present timeline, a drug addict, Shiv Mathur (Akshay Oberoi), along with three medical researchers, develops a special pill, ‘Magic’, that later disrupts the illegal drug trade.

It is undoubtedly a high voltage drama series! The performance of all the actors, especially Akshay Oberoi’s, will keep you hooked till the end of the story. The cinematography adds depth to emotions making each scene worth watching.

Aashram is MX Player’s original web series that marks the digital debut of  Bollywood actor Bobby Deol. The TV series is about Baba Nirala (Bobby Deol), his deeds, and how he misleads his devotee in the name of spirituality. However, no matter how big the lie is, the truth is unravelled one day. Watch out for both the seasons of this web series streaming only on MX Player now.

Inspired by the real-life tragedy Raktanchal is next in our best MX Player web series list. The series transports to the 1980s in Purvanchal, where a Waseem Khan (Nikitin Dheer) rules tender mafia. He is also involved in the smuggling of ammunition and arms. His power and business are challenged by the antihero Vijay Singh (Kranti Prakash Jha), who determines to seek revenge from Khan for his father’s murder. On the other hand, Khan is determined to hold on to his power irrespective of any consequence. The series has 9, 30 minute long episodes that would surely entertain you.

Based on the real events, Ek Thi Begum is the transformation story of a beautiful woman, Ashraf, aka Sapna. She is a wife of Zaheer, who was once a confidant of Maqsood- the most significant mafia, but later become his arch-rival. Due to the increasing tension between the both, Maqsood plans to kill Zaheer, which led to Sapna’s entry into the Zaheer gang.

Ashraf determines to ruin Maqsood’s empire in order to take revenge for his husband death. Will she get successful in her plan, or will she be killed like her husband? To know this, watch the Ek Thi Begum web series on MX Player.

With the backdrop of Muzaffarnagar, the story focuses on the honest SSP, Naveen Sikhera (Mohit Raina, who aims to make his city crime-free. However, he is challenged by criminals and local goons at every step. His struggle to overcome all the tribulations and fight back with all the ordeals to restore peace in his city forms the rest of this crime drama. It has ten episodes that are 30 minutes long. This MX Player web series is winning everyone heart for its engaging story and on-the point performances.

Pawan & Pooja is a sheer delight to watch. The story revolves around three couples that depict three different stages of life, and coincidently, these three couples share a similar first name, i.e. Pawan and Pooja. The series showcases different perspectives of love and the struggle that one goes through in their relationship. The series has ace actors like Mahesh Manjrekar, Deepti Naval, Sharman Joshi, Gul Panag, Taaruk Raina, Natasha Bharadwaj in the key roles.

Amruta Khanvilkar starrer, Damaged is a spine-chilling thriller that should be on your list of web series to watch on MX Player. The series is one of its kind as it is probably the first series that features a woman serial killer. The series concentrates on all the crimes committed by the serial killer, followed by its investigation. What makes it different from the rest is that there is no protagonist and antagonist. Sometimes you will applaud the investigation team, and sometimes you will sympathise with the serial killer. This web series is currently streaming on MX Player, where you can watch it for free.

Loosely based on the real-life story of late Tamil Nadu Chief Minister J. Jayalalithaa, Queen is a must-watch. This MX Player original will take you through the life of the former CM. The story starts from the childhood days of Shakthi Sheshadri (Ramya Krishnan), followed by her entry into the cinema and transition to politics. Apart from this web series, a Hindi movie, Thalaivi -based on the life of CM is slated to release in Cinemas soon. The film stars Kangana Ranaut in the pivotal role.

The action thriller has 12 entertaining episodes that will surely make you binge-watch the series. You can watch this Web series on MX player for free. The story focuses on the life-tussle of an honest senior inspector- Rudra Srivastava (Arunoday Singh), who was lured to kidnap a girl named Anusha. Soon after the kidnap, his life takes a drastic change, and he is trapped in his own deeds. Surprisingly the entire kidnapping was conspired by Anusha’s mother. Why a mother would ask a cop to kidnap her daughter and what forces the inspector to kidnap weaves the rest of the story. Do Catch Apaharan Web Series on MX Player.

This romantic saga is all about the toxic relationship of its leads- Agastya (Sidharth Shukla) and Rumi (Sonia Rathee); Agastya is a temperamental and self-destructive, struggling theatre director. Rumi is a rich, resentful woman who is obsessed with her childhood crush Ishaan (Ehan Bhat). When the worlds of these two collide, you can surely expect some fireworks that would surely keep you hooked with this ten episodic series. Besides its third instalment, you can also watch out for the former parts that had Vikrant Massey and Harleen Sethi in the key role

Karachi Kalam is MX Player new web series. The Tamil series is all about the high-intensity rivalry between the two gangs of Chennai, which is further fuelled by the corrupt politicians and police. A young budding cop, Vijay (Sanam Shetty Maheshwari), is caught in the crossfire and is thrown into situations that he never imagined. Will Vijay stand to his upright morals or succumb to the system? To find out this and more watch Kuruthi Kalam streaming on the OTT channel now.

Founded in the year 2011, MX Player is one of the well-known video streaming and video-on-demand platforms. From web series, TV shows to movies, it has a wide range of content in different languages and genres. Some of the web series that you will exclusively find on the platform are Aashram, Samantha, High and many more that we have shared in the list.

1. How to watch web series on the MX player app?

You can download the MX Player app on your smartphone and watch your favourite web series without any hassle.

Open the app, go to the Open online section, select the web series you wish to download and click on the download button. Once the series is downloaded, open your file manager, then click on the data folder, and then tap on “www.mxplayer.in” and open the series.

Yes, MX Player is a free video streaming platform that you can download on your laptop, smartphone or Smart TV.