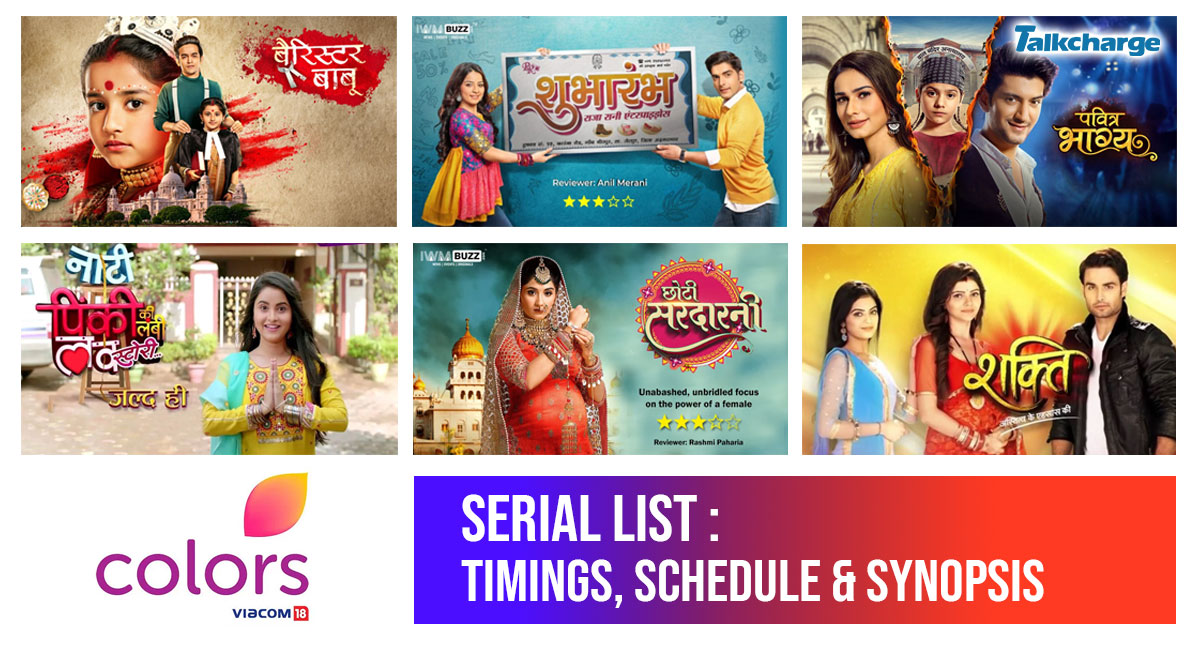 Launched in the year 2008, Colors is one of the top Hindi entertainment channels. Over the years, the channel has broadcasted many famous shows like Balika Vadhu, Uttaran, and many more to name. This year Colors TV has introduced many TV serials that have captured the households with the strong TRP. Here is the latest Colors TV serial list 2023 along with its name, timings and schedule that are aired on the channel on weekdays and weekends.

When we talk about the new programs shown by Colors TV, how can we forget Bigg Boss 16: Game Badlega, Kyunki Bigg Boss Khud Khelega! This Colors reality show name is quite popular among Indian audiences. The premiere of this show was on 1 October 2022 and again Salman Khan is hosting it just like the various previous seasons. There are many interesting names in the housemate list of this Colors TV serial such as Nimrit Kaur, Tina Dutta, Sajid Khan, Shalin Bhanot, Sreejita De, and many more to name. Do follow our blog to get to know about the new updates on this one of the top reality shows.

If you are a fan of dance reality shows, you must admire the famous Jhalak Dikhhla Ja Season 10. After 5 long years, the recent season of Jhalak Dikhhhla Jaa showed some famous celebrities who performed to won the grand trophy. This Colors TV show was hosted by Manish Paul as well as Arjun Bijlani and judged by filmmaker Karan Johar, the dancing sensation Madhuri Dixit, choreographer Terence Lewis and the stunning Nora Fatehi. The premiere of the show took place on Colors TV on 3 September 2022 and ended on 27 November 2022. Winner of Jhalak Dikhhla Ja 10 is Gunjan Sinha who beated the television celebrity Rubina Dilaik.

The Super Fantasy thriller is produced by Ekta Kapoor. This is the sixth season of the show with a different story altogether. The first season premiered in 2015 and had Mouni Roy and Ada Khan in pivotal roles. In this season, the Naagin ha re-appeared during a world crisis. Must Watch this one of the latest Colors TV series.

The storyline of this TV show explores an unsaid sacrifice, a sweet family, and astonishing disloyalty. To create a perfect family, Swaran sacrificed her love. However, she had no idea that one day her kids would leave when she required them the most. Will materialism and selfishness succeed over the matters of the heart? To know more about the story, watch Colors TV new serial 2023.

Another exciting name on the Colors TV serials list 2023 is Muskuraane Ki Vajah Tum Ho. As per the plot of the show, Katha, the lead character, is trying to find the answer to the significant question, which is: Is it necessary that a child should take on his father’s name, or a mother’s name can be adequate? Watch this Colors TV show to know how Katha searches for happiness while living her life.

A romantic story of Haryana ka Jaat – Harphoul Chaudhari and Kerala ki Pennkutty – Mohini Vijayan. They belong to different worlds and happen to be together due to destiny. Their lives conflicted, and beliefs scrambled. It is one of the liked shows telecasted on Colors serial list 2023.

The next name on the Colors new serial 2023 is ‘Spy Bahu’. A witty spy girl named Sejal ties the knot with a handsome terrorist Yohan, who is on a confidential mission. This drama series revolves around the story of Sejal will end up liking the suspected terrorist.

One popular shoe Fanaa: Ishq Mein Marjawan, has made its place on the Colors TV serial list 2023. Pakhi’s life gets turned around by her friend and compulsive lover, Agasthya! He utilizes technology to search for her and win her love.

Synopsis: After the huge success of the first season of Sasural Simar Ka, the show is back with its second season. The current edition explores a new-age story of the Simar and Reema sisters. Both wish to follow their dreams; however, their fate has other plans as they are married in the Oswal family. It would be interesting to see whether Simar and Reema will accomplish their dreams or would have to give up their dreams. The TV show premiered in April 2021.

The former season had Dipika Kakar Ibrahim as Simar and Avika Gor as Roli.

Produced by renowned TV personalities Sargun Mehta and Ravi Dubey, Udaariyaan is next on our list of Colors TV serials list today. It began in March 2021. Udaariyaan revolves around Tejo Kaur Sandhu, Jasmin Kaur Sandhu, and Fateh Singh Virk. Fateh loves Jasmin. However, she is not interested in him and wishes to move to Canada. For the sake of her family’s reputation, Tejo marries Fateh. Upon Fateh’s marriage to Tejo, Jasmin realizes her love for Fateh and wants him back in her life.

Will Jasmin get Fateh back, or would he choose Tejo? Watch this drama on the Colors TV channel at 6:30 PM to learn more.

After the death of Meher and Sarab, the show has taken 16 years leap. While Avinash Rekhi bid adieu to the serial, Nimrit Kaur Ahluwalia reprised the role of Seher (Meher and Sarab’s daughter). Seher is a bold and deep, rooted girl studying in Canada. Her brothers Param and Karan are looking for a suitable groom for her, without knowing that she loves Kunal (Varun Toorkey). On the other hand, Rajveer has feelings for Seher. Whether Seher’s brothers approve of her love or find Rajveer a suitable choice for their sister. The show was telecasted for the first time in July 2019 and ended on 10 June 2022. This serial is undoubtedly one of the best programs shown by Colors TV.

Balika Vadhu 2 is a reboot of the famous TV show Balika Vadhu that aired on the same channel from 2008 to 2016. The show also showcases the prevalence of child marriages in this day and age. The show premiered on Colors TV on 9th August 2021 and last aired on 29th March 2022. It has Shreya Patel and Vansh Sayani in pivotal roles.

Barrister Babu is about a child bride, Bondita Das, married to Barrister Anirudh Roy Choudhary, while he fights against society and educates her to become a barrister. The show started in 2020 and last aired in November 2021.

Nima Denzongpa is the latest entrant to the Colors TV serials list. It revolves around the challenges the Northeastern girl, Nima, faces when she moves to Mumbai. The serial marks the debut of the Assamese actress Surabhi Das in the Hindi industry. The serial is aired at 1:30 AM for half an hour. You can watch it any time on Voot or on the official website of Colors TV.

Colors TV serial list today also includes the recently launched show Thoda Sa Baadal Thoda Sa Paani, which aired at 2:30 PM. It focuses on the struggles faced by a Bengali girl, Kajol Mukherjee, after her father’s death. The show has famous actress Ishita Dutta in the lead. The show was lastly telecasted in March 2022.

Judged by Madhuri Dixit and choreographers Dharmesh Yelande and Tushar Kalia, Dance Deewane 3 is a dance-based reality. The talented dancers(participants) are divided into three groups, i.e., different generations, and are challenged to show their best moves.

In the Colors TV serial list 2021, Sirf Tum’s show has occupied one of the top positions. The story’s plot revolves around an innocent girl Suhani who aspires to become a doctor. On the other hand, Ranveer is a strong-headed man with only one aim, Suhani. Fortune makes them come closer, but a dark secret emerges. Will it keep them to bring them together, or will it shatter their bond forever? Must watch this show to know the whole story.

The Colors TV series centers on the life of the quaint woman, Vidya, who waits for a government job. Though she gets the job of a teacher, she is not that educated. However, she is pushed to take the job and fight for her rights.

Shubharambh means an auspicious beginning. The TV story focuses on Raja Reshammiya: who belongs to a wealthy family but lacks confidence, and Rani Dave, who belongs to a poor girl but is confident and sharp. The love blooms between the two, and their lives take a roller coaster ride.

The story revolves around Lavanya Gagan Bhardwaj, who is an aspiring comedian. She is fondly called Pinky. Her short height and marital status tease her. She does get married, but her husband keeps an extramarital affair. After confronting the truth, Pinky moves ahead in life and finds love again. What happens next? Watch Naati Pinky ki Lanbi Love Story on Colors.

The TV series centers on Pranati Mishra and Reyansh Khurana, who fall in love in college. Pranati gets pregnant with Reyansh’s baby. However, Reyansh does not accept the baby. Pranati’s mother gives the baby girl to the orphanage and tells her she had a miscarriage. The baby is later named Jugnu. After eight years, fate makes three of them meet.

Colors are one of the famous channels that broadcast many TV serials that have become part of our lives. In this blog, we have curated Colors TV Serial List –these serials are broadcasted on the channel on weekdays and weekends. Apart from this, we have also mentioned the Colors TV schedule for all shows shown on different days.

1. Which is the best Colors serial name?

2. Where can I watch old Color TV serials?

You can watch Colors TV serials on the Colors channel and Voot.

The Colors serial list timetable 2023 is provided in the above write-up.

The TV show Sirf Tum, one of the Colors serials, will end.

5. Which new serial is coming on Colors TV?

6. Which names are there on the Colors TV upcoming serial 2023 list?

12 Educational Websites in India to Consider in 2023
100+ Shayari on Life in 2023: Hindi, English, Inspirational & Emotional