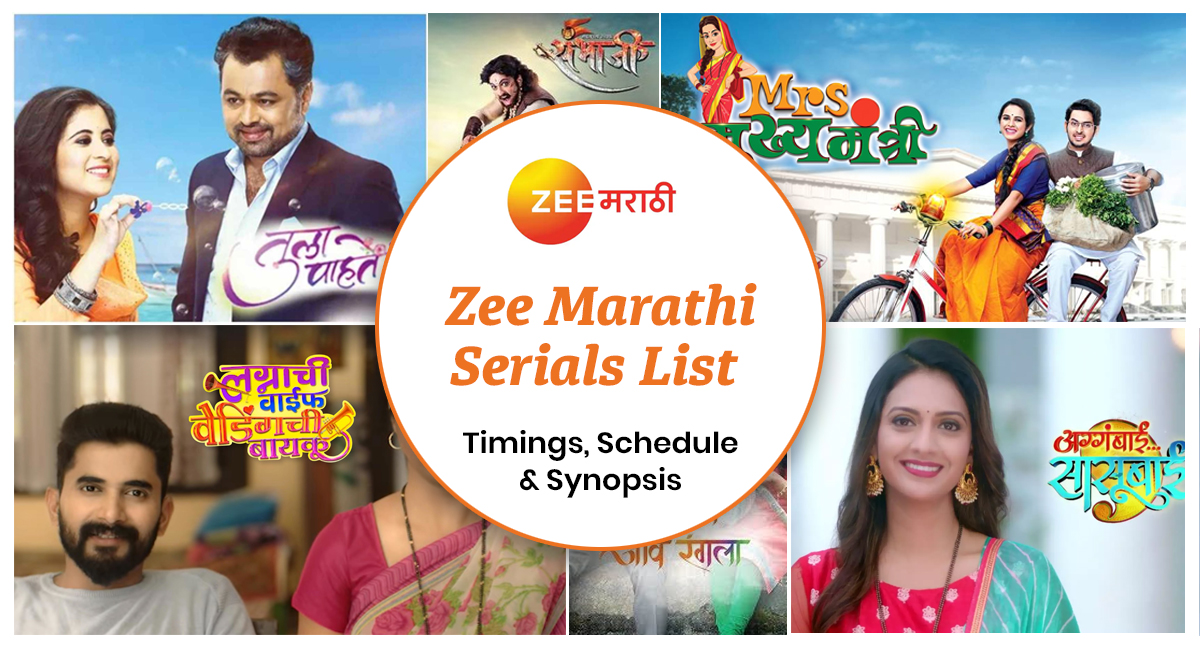 The latest name on the Zee Marathi serial list is the drama series ‘Tu Tevha Tashi.’ On 20 March 2022, the serials’ first episode was telecasted. The storyline of this drama series revolves around two individuals, Anamika Dixit and Saurabh Patwardhan, who are in their 40s. Both have experienced many turmoils in their lives and were earlier college classmates. During their college days, Saurabh liked Anamika but never expressed his feelings toward her. Watch this trending program shown by Zee Marathi to learn how the couple reunites after a long separation.

One of the trending Indian Marathi mythological TV series ‘Satyavan Savitri’ has currently broadcasted on the Zee Marathi channel. The story of this Zee Marathi new serial tells about the legendary story of Prince Satyavan and Princess Savitri. They married each other, but Savitri didn’t know that his husband, Satyavan was an exiled prince and would die. Follow this fantastic mythological television series to learn how Princess Savitri saved Satyavan from Yama with her immense love, compassion, and determination.

Next name on the list of Zee Marathi serials is Ghetla Vasa Taku Nak, an Indian Mythological show! The series presents epic tales of Vishnu Purana, Bhagavat Purana, and Chaturmas. It premiered in March 2021 and is telecasted at 6:30 pm (Monday to Saturday).

Man Jhala Bajindis next on our list of Zee Marathi new serial 2021. The show starts in August 2021 and airs at 7 pm (Monday to Saturday). It is a story of a highly educated girl, Krushna. She is married to Raya, who belongs to a less educated family. The show explores her struggles and challenges while coping with the new family.

Starting in August 2021, Man Udu Udu Zhala is one of the most-watched serials on the Zee Marathi channel. It is a love story of Indra and Deepali, who are poles apart. The timings of this show are 7:30 pm to 8:00 pm (Monday to Saturday), and its repeat telecast airs at 2 in the afternoon. You can also watch all the latest episodes of this family drama on the digital platform Zee 5 and Airtel Xtream.

Next in the Zee Marathi latest serial list is Yeu Kashi Tashi Me Nandayla. It concentrates on the ordeals of, Sweetu, a poor and overweight girl. She has to move to her mother’s friend’s house for a job, where she meets Omkar, and they gradually fall in love.

With famous actor Shreyas Talpade in the lead, Mazhi Tuzhi Reshimgaath is the new Zee Marathi Serial. The timings of this show are 8:30 to 9 pm, and you can watch it Monday to Saturday. This soap opera is about a business tycoon, Yash, who falls in love with Neha. The show has already won many hearts with its sweet and gripping story.

Tujhya Majhya Sansarala Ani Kaay Hawa premiered in August 2021. It is a Zee Marathi 9 pm (Monday to Sunday) serial that revolves around a young and smart girl, Shruti, who is born and brought up in a nuclear family. Her life takes a 360-degree turn when she is married to a joint family and adjust according to her new family’s lifestyle.

This musical show started in 2006 and is back with its 14 edition. Famous singer and musicians Avdhoot Gupte and Vaishali Samant are judging the show. The show garners huge TRP because of the conventional format, judges, and talented participants.

This horror show is based on the reunion of a group of friends who meet at an abandoned place. What happens next will surely leave you in splits.

The show is the extension of Ratris Khel Chale, which revolved around Anna’s family. Years later, Naik’s ancestral home is in bad condition, and its family members have separated. The supernatural television series airs at 11 pm from Monday to Saturday.

This Zee Marathi TV serial revolves around a girl named Sai, who has a love marriage. Once the girl is married to her love – Aditya, her life changes completely. Her trials and tribulations to adjust to the family lead to many hilarious situations.

Tuzyat Jeev Rangla is about a well-known wrestler – Rana, who lives in Kolhapur, Maharashtra. His life takes a complete change when he meets the lady love of his life-Anjali. She is a talkative and beautiful girl who, too, loves Rana. To get more insights about the show, do watch the serial.

Next in the programs shown by Zee Marathi is Mazhya Navryachi Bayko. The story of this famous Zee Marathi serial concentrates on Radhika, who lives in Nagpur with her husband. She suspects her husband is having an extramarital affair with one of his colleagues. All the episodes of this show are currently available on Zee5.

Next on Zee Marathi Serials List is Vastu Doctor. Want to know about Vastu Shastra in-depth? Tune in to Zee Marathi’s latest show Vastu Doctor. You can directly connect with the Vastu Shastra expert-Dr. Mahesh Surve. He would help you know all the hacks to bring positivity to your life and plan an ideal layout of your space.

Honar Soon Mi Hya Gharchi focuses on Shri, a young businessman who loves all the ladies of his home that have raised him. After getting married to Janhavi, the love of his life, he gives responsibility to her to keep all the ladies of the house happy and satisfied.

The home minister is a game show hosted by Aadesh Bandekar – a host-Marathi actor and Shiv Sena leader. He visits people’s homes in Maharashtra and challenges them to a series of games that would win them a grand prize. Amidst COVID-19, the format of the show is under change.

Mrs. Mukhyamantri concentrates on a small-town married who is married to the chief minister. After the marriage, her life completely changes as she faces new problems and struggles. The show will keep you smiling throughout! To know more about the show, tune in to live TV apps like Zee 5 or the Zee Marathi channel.

The chat show has been completed for over five years, and it first aired in 2015. Chala Hawa Yeu Dya is hosted by Dr. Nilesh Sable, who invites stars from the Marathi film industry and discusses their work. He also calls celebrities to participate with his eccentric family to spice up things.

After Anna’s death, his family learns that Anna has also left the share of the property for her illegitimate daughter, whose mother attempted suicide near Naik’s house. The family members soon experience strange activities that are thought to be pronominal activity; however, the daughter-in-law of the family search for the practical reason behind the activity.

Zee Marathi, the regional channel, is popular in India due to its combination of TV series that has touched all genres, including soap operas, family drama, reality shows, comedy, etc. In this blog, we compiled a Zee Marathi all serials list with timings, schedules, and synopsis. Tune in to Zee Marathi or Zee 5 to watch all the serials.

1. Where can I watch Zee in Marathi?

You can watch it live on Zee 5 or Airtel Xtream.

2. Which new serial is coming on Zee Marathi?

3. Can I watch previous episodes of Zee Marathi serials online?

You can watch all the old and Zee Marathi new serials on the channel on Airtel Xtream and Zee5.

4. Which serial airs at 7 pm on Zee Marathi?

Aappi Amchi Collector is telecasted at 7 pm on the channel.

The name of the show that is telecasted at 7:30 on the channel is Tu Chaal Pudh.

6. Which serial is aired at 9 pm on Zee Marathi?

7. Which serial is ending on Zee Marathi?

Recently, channel famous serial Devmanus has gone off the air.

8. What are some latest names on the Zee Marathi new serial 2023 list?