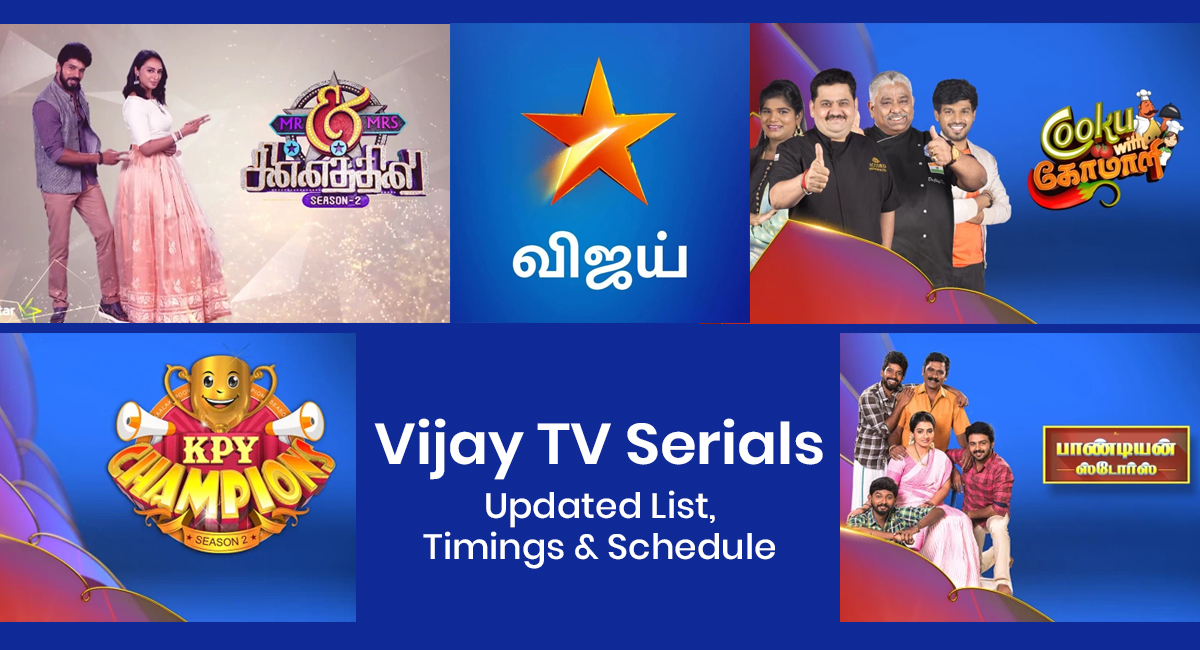 Founded in 1994, Vijay TV was acquired by the Star TV network. Also known as STAR Vijay, the channel is among the country’s oldest Tamil TV channels. STAR Vijay is also part of Asianet Star Communications. It broadcasts an array of Tamil movies and serials that have gained accolades from its audience over the years due to their rich content. Here we have curated the entire Vijay TV Serials Today schedule with timings.

This latest Vijay TV serial name is a popular one in the Tamil drama television series. The show’s first season, ‘Eeramana Rojave 1’ aired in July 2018 and ended in August 2021. Its second season has now started in January 2022. As per the plot of the story, Jeeva and Kavya are in love with each other. Earlier Jeeva’s brother and Kavya’s sister were going to get hitched, but ultimately, Kavya ties the knot with Jeeva’s brother, and Jeeva marries Kavya’s sister.

If you are a fan of comedy-based cooking competition shows, then ‘Cooku with Comali’ is your best bet. The show has occupied one of the top positions in the Vijay TV new serial name. It has run for three seasons, the first aired in 2020, the second in 2021, and the latest one premiered on 22 January 2022 and finished on 24 July 2022. The show’s concept revolves around the contestants and comalis being challenged by the judges’ Chef Damodharan and Chef Venkatesh Bhat.

Super Singer Junior – Ithu Thamizhagathin Chellakuralukkana Thedal is another top-rated name in the Vijay TV programs. This show’s theme is hunting singing talent among the children in the age group 6-14. The show has attracted huge audiences, which is why it has run for more than seven seasons. Its latest eighth season aired in December 2021, in which Krishaang was declared as the winner who belonged to the team from Rowdy Baby.

The storyline of this Vijay TV serial tells about the unanimity among four brothers. The eldest of the brothers is married, and his spouse takes care of the other three brothers. All brothers own a grocery shop. Mullai gets hitched to Jeeva, who is in love with Meena. However, Meena weds Jeeva, and Mullai tied the knot with Kathir.

The much-awaited reality show Bigg Boss 5 is one of the top-rated names on the Vijay TV serials list. This time too superstar Kamal Haasan hosted the show. The show premiered on 3rd October at 6 pm on Star Vijay and Disney+ Hotstar. Its grand finale happened on 16th January 2022. The winner of this season was Raju Jeyamohan, and the runner-up was Priyanka Deshpande.

NINI is about twin brothers who are separated at their birth. Unknown to each other, both brothers -Mayan and Karthik, marry girls who happen to be stepsisters. Their life changes post-marriage. The first season of the show ended abruptly due to a nationwide Lockdown. The second season also revolves around twin brothers. Season 2 of this show started in 2020 and last aired on Star Vijay TV in June 2022. You can watch this show on Hotstar as well.

This Tamil language series concentrates on the life of a young girl Shakthi who lost her mother and is unknown of her father’s whereabouts. Her aunts sell her as she has a good voice; Shakti is adopted by her birth father with a series of events. Season one enjoyed a good TRP. After 12 year leap, the makers revamped the serial with a new story known as season 2. The timings of Mouna Raagam 2 are 7:00 PM, and you can watch it from Monday to Friday.

Starting in March 2021, Raja Paarvai is one of the most famous names on the Vijay TV serial list. It is a remake of Star Bangla’s TV series Sanjher Baati. This family drama revolves around a visually impaired man, Ananad, whose life takes positive changes after the entry of a girl, Charu. It was aired for the last time on television in December 2021.

Starting in January 2021, Kaatrukkenna, Vijay TV’s new serial, is about a young girl, Vennila, who aspires to be a collector, but her father forces her to marry. Vennila elopes from her home and embarks on a new journey to accomplish her dream.

Next on Vijay TV serial name list is Velaikkaran. The  TV series concentrates on the struggles of Velan. He works as a servant in an affluent family and looks after every member like his own family. You can watch this serial online on Disney+ Hotstar.

Vijay TV serial list 2022 also includes Namma Veettu Ponnu, a story of two youngsters- Karthik and Meenakshi, who cannot stand each other. On the contrary, their respective families consider them suitable life partners for each other. To know what happens next, watch this family program from 2:30 PM to 3:00 PM from Monday to Saturday.

Thendral Vanthu Ennai Thodum is next in the Vijay TV new serial list 2022. It is a remake of Khelaghor, a popular family drama of Star Jalsha. This crime drama explores the life struggles of Abhinaya, an educated and traditional girl. The TV series premiered on 16th August, and within a short time frame, it has become one of the most-watched serials on the channel. The show’s timings are 3:00 PM to 3:30 PM from Monday to Saturday.

This Tamil-language family soap opera series was originally telecasted from 2018 to 2020 from Monday to Friday. However, due to the immense fan following of the series. It is a story of Rohini and the changes she witnesses in her life upon her marriage to Gowtham.

Paavam Ganesan is one of the most popular Tamil shows. After finding Guna’s caring nature for him, Ganeshan falls in love with her and plans to confess the same. This romantic drama is a delight to watch!

Starting in 2020, Baakiyalakshmi is one of the best serials on Vijay TV. Also famous as Baagyalatchumi Illatharisiyin Kadhai, the serial focuses on Baakiyalakshmi. She is married and has three kids. Gopinath’s husband does not love her and plans to live with his ex-girlfriend.

Watch the serial to know what Baakiyalakshmi will do when she finds out about her husband’s extramarital affair.

Telecasted at 7:30 PM, Thamizhum Saraswathiyum is a sweet love & hatred story of Saraswathi and Thamizh. The show is gaining huge TRP due to its engaging story. You can watch the repeat telecast of the show at 11:30 AM on the channel or stream it on Disney+ Hotstar.

Kannamma, a dusky-complexioned girl, combats the stereotype of colorism in India. Just because she does not have a fair complexion does not mean she has no right to love someone. Watch forthcoming struggles of Kannamma only on the Vijay TV channel from 9 PM to 9:30 PM from Monday to Saturday.

Raja Rani has two seasons. The plot of the first season focused on the story of Semba. It was a remake of the Star Jalsha serial, Ke Apon Ke Por. The second season revolves around the educated and ambitious Sandhya, who wants to become an IPS officer; due to her parent’s untimely death, she is married to a confectioner.

Senthoora Poove focuses on the life of Duraisingam, a widower and a father of two girls. While Duraisingam is shattered after losing her wife, his family plans to get him married. He refuses the same. Kayal, Duraisingam’s daughter, gets close to her teacher-Roja. Roja elopes with her boyfriend after hearing the same; her family kills the boy and forces her to marry Duraisingam. Will Roja be an ideal mother for Kayal? To know this, do watch Senthoora Poove Monday to Saturday.

A very famous name in the Vijay TV serial list 2022 is Neeya Naana. This Talkshow started in 2006 and till now has run for 23 seasons. In this show, two groups put their viewpoints forwards and attempt to make other teams lose with their arguments. At the end of the debate, Gopinath expresses his personal observation.

Bommukutty Ammavukku is a Tamil language soap opera and a remake of the Bengali language TV show Maa…Tomay Chara Ghum Ashena. The story revolves around parents who have lost their daughter in an accident and plan to adopt a girl child. Together they deal with all the ordeals of life. The show started in February 2020 and completed 156 episodes. It was last aired in December 2020.

Next on the list of Vijay TV serials today is Kaatrin Mozhi. The serial is about a dumb girl who is been rejected by her father. She tries her best to get love and affection from her father but feels miserable.  On the other hand, Santosh, a wealthy man, starts liking her. After running for more than one and a half years, the series went off the air in April 2021.

Airtel Super Singer is a music reality show. The show was started in the year 2006 and has completed seven seasons. Contestants with great voices are selected for the show. After weeks of competition, one amongst them wins the show.

Shirdi Sai Baba is based on the life of Saint Sai Baba. The mythological serial narrates two stories and how simple men become a saint for many. The show garnered a huge fan following. Through this TV series, Dr. Ramanand Sagar shares the spiritual, social wisdom, and messages of Sai Baba along with cinematic entertainment. The show is also available on online live apps like Disney+ Hotstar.

This Vijay TV serial is a comedy reality show. The reality show is judged by Nandhini, Priyanka Deshpande, Balaji, Erode Mahesh, Mimicry Sethu, Aarthi, and Jangiri Madhumitha. The show has 10-12 contestants who compete with each other. It is one of the best reality shows in the Tamil TV industry. Kalakka Povathu Yaaru has completed five seasons.

Also known as Star Vijay, Vijay TV channel is one of the Tamil TV industry’s known channels. It was introduced in the year 1994. The channel is available on all the leading DTH service providers, including Airtel Digital TV, Dish TV, Tata Sky, and many others. The channels have many successful serials like Pandian Store, Mouna Raagam, Senthoora Poove, etc.

Bharathi Kannamma has the highest TRP, which is 12.60.

2. What are the programs on Vijay TV?

3. How can I watch Vijay TV serial?

You can connect with the DTH service provider for the channel or watch all the shows on Disney + Hotstar.

5. What is Pandian Stores timing today?

You can watch Pandian Stores today at 8 PM on Star Vijay TV.

Naam Iruvar Namakku Iruvar is telecasted at 6:30 on the Vijay TV channel.

8. When Bigg Boss 5 Tamil will be premier?

The season 5 of Bigg Boss Tamil was won by Raju Jeyamohan.

9. Who hosted the 5th season of Bigg Boss Tamil?

10. Who all have participated in Bigg Boss 5 Tamil?

11. What were the timings of Bigg Boss 5 Tamil on Vijay TV?

Season 5 of Bigg Boss was telecasted at 10 PM on weekends and was shown at 9 pm on weekends.

12. What are Mouna Ragam 2 serial timings?

You can watch the second season of Mouna Ragam at 7 PM.