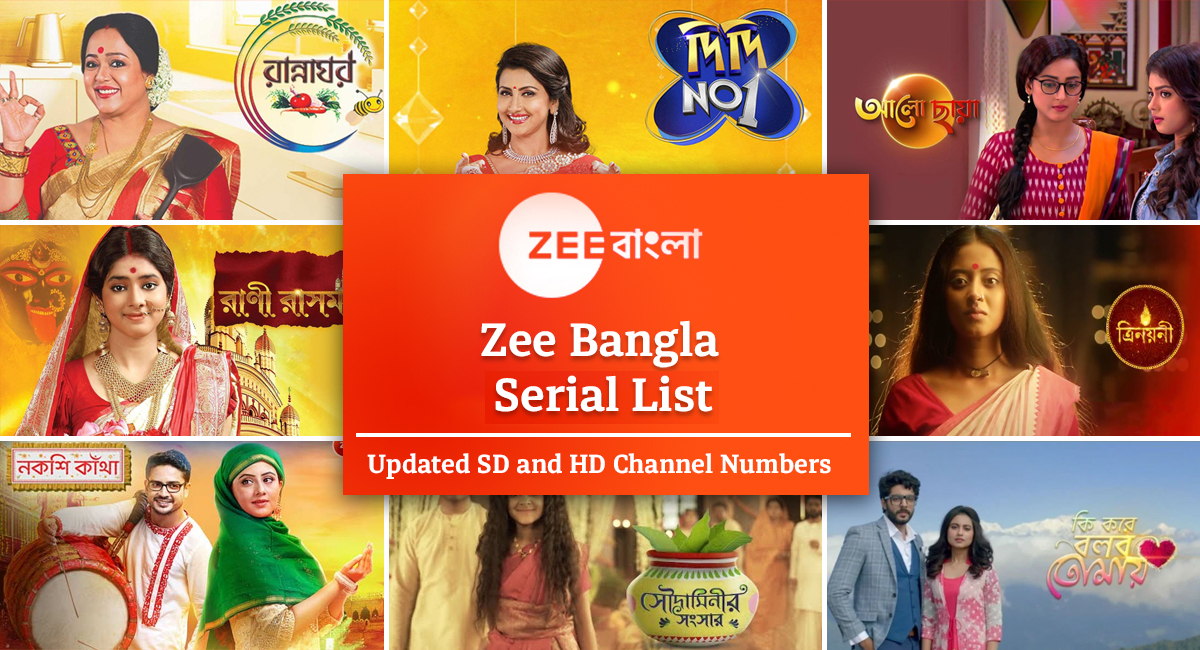 Zee Bengali is a cable television channel that caters to the Bengali language. The channel is backed by Zee Network and is also part of the Essel group. It is one of the first Bengali channels in the country. It was introduced in the year 1999. Since then, the channel has been enjoying huge viewership. All thanks to its unique serials. Some TV serials like Rannaghar, Khirer Putul, and Subarnalata have broken many stereotypes. Read more to know Zee Bangla serial list along with time and synopsis.

Starting in 2021, Uma is one of the leading names in the Zee Bangla serial list. The show’s plot tells about a girl, Uma, who is passionate about becoming a cricketer but has to quit her ambitions due to family responsibilities. But, her zeal for cricket and her spouse Abhimanu’s continuous inspiration made her play cricket again.

Pilu is one of the latest shows telecastd on Zee Bangla. This 2022 Bangla drama TV series has hit the top position on the Zee Bangla current serial list. The story revolves around a folk singer Pilu who hails from a village. She sings very well, and her talent gets noticed by her father, Aditya, who is actually Pilu’s father. Pilu doesn’t know about her father as she has never met him. Aditya chose Aahir, his favorite student, as his music teacher of Pilu. Irrespective of starting clashes in music, they fall for each other.

Another name on the Zee Bangla current serial list is Uron Tubri. The show first aired in March 2022 and is produced by Friends Communication. The storyline of this famous serial explores the lives of three girls and their mother. Tubri is one of those girls and lives with her mother and two sisters. They own a roadside food stall selling chop, a Bengali snack, for their survival. The serial also shows how a single mother faces problems in society to earn a living.

Zee Bangla all serial list is incomplete without Gouri Elo. This Indian Bengali TV series tells about two characters, Dr. Ishan, who is an atheist, and Gouri, who believes in God. After the arrival of Gouri, the temple’s gate gets opened up. Dr. Ishan has a strong belief that worshipping God is superstitious. After this comment, Gouri replies, ‘Maybe from tomorrow you will trust the most’.

This 2021 Bengali romantic comedy-drama TV series is one of the best Zee Bangla serial list. As per the plot of the story, Mithai is a happy sweetseller. She moves to Modak family to vend sweets and with time, forms a close relation with all the Modak family members. A twist comes in the picture when Mithai flew away to Monohoro from her marriage with a boy named Lokai. After seeing this, Dadu takes a decision to get Mithai wed to Siddhartha. The boy at first denies to get marrried to Mithai because he had a bad childhood experience due to his parents. Thereafter, Dadu plans to get Mithai wed to Som who refuses on the marriage day. So, Siddhartha ultimately has to wed Mithai to save Dadai’s honour. You can watch this beautiful TV series on Zee5 as well.

Starting in 2021, Rimli is one of the latest Zee Bangla serial. It revolves around the beautiful and courageous woman, Rimli. Born in a family of farmers, Rimli along with other farmers is often troubled by the affluent people of the society. The resolute girl does not shy away from mouthing her opinions and works hard to get farmers their rights back.

Next in the Zee Bangla serial list is Dadagiri. Premiered in 2009, Dadagiri Unlimited is ready for its Season 9. Like its previous years, this year too, the show will be presented by the ace cricketer Sourav Ganguly. The shooting of the show has recently started and it would be soon telecasted on the Zee Bangla. The timings of the show are yet to be confirmed. The audition for upcoming edition has started. The quiz show features both commoners and celebrities allowing the contestants to win an exciting amount. Lit its previous seasons, this edition will also be telecasted in weekends.

The story revolves around a young girl Jamuna, who is a drum a player. She is married into an upper-class family and finds it challenging to keep her new family’s standards. Do watch this entertaining serial on your favorite channel Zee Bangla.

Inspired from the kid’s fantasy novel with the same name-Kirer Putul, the serial is about Deepanaga’s king, who has two wives- Suo Rani and Duo Rani. The king gifts a massive treasure to his favorite rani and the other one gets barely anything which leads to animosity between the two rani’s.

Next in the Zee Bangla current serial list is Kishnakoli- a young and dusky, who aspires to be a famous singer and dancer. Her life soon takes a turn when she is married. She finds it difficult to balance her life; the story explores the life of every dusky skin girl and their ordeals.

This Bengali Television period drama is inspired by the real-life of Karunamoyee Rani Rashmoni, who founded the Dakshineswar Kali Temple and is known for her fight against British East India. The serial narrates her life and how she changed her heart to save her empire from Britishers. Do watch this serial to know about queen Rashmoni.

Subarnalata is about a strong and lung girl who is forcefully married into an orthodox family. However, the young girl does not lose the zeal to live her life and fights back for her rights. This TV serial initially aired in the year 2014. However, due to the audience’s high request during COVID-19, the channel is rerunning the show.

Bhuti is the Hindi TV series that was first aired on Zee TV in the year 2016. The serial is currently is part of the Zee Bangla serial list. The story focuses on the ghost of the 7-year-old girl who tries to save her mother from all the difficulties with the help of Krishna, who has her own story in the parallel. You can watch it on the Zee Bangla channel and live APPS like Zee5.

Rannaghar is one of the best cookery show on Zee Bangla channel. It happens to be the longest-running serial of the channel. It started in the year 2005. The host shares recipes for a number of dishes and asks the participants to share their favorite recipes as well.

Didi No 1 is a reality show in which women from Bangla compete with each other in order to win exciting prizes. It is one of the top-rated Zee Bangla serials. You, too, can participate in the game if you live in Bangla. Tune in to the TV series to know more.

This Bengali TV soap opera centers around two best friends-Alo and Chhaya. Alo is neglected by her family, which further affects the bond between two girls. This Bengali show started in 2019 and is one of the most loved shows. Thus, it has marked its entry in the best Zee Bangla serials list.

Another show that has made to Zee Bangla serial list 2022 is Kadambini. The TV series is based on the Pre British Era. It is a story of a young girl who overcomes all the trials and tribulations of life in order to become a doctor. It is one of the most inspiring and distinguished Bangla serials that enjoy colossal TRP.

Phirki is a young girl who is brought up by Lokhi- a transgender. Both lokhi and Phirki face many difficulties and challenges as society opposes then together. The show garnered positive feedback due to its unique storyline and amazing screenplay.

Zee Bangla serial list also includes Ki Kore Bolbo Tomay that features a budding fashion designer- Radhika. A night before her marriage, Radhika’s would-be husband abandons her, and she slips into trauma. The girl overcomes the dilemma and gain falls in love with her boss.

Baba Lokenath is one of the saints who resides in Bengal. The TV series mimic the 18th and 19th centuries, where the priest worked hard for the betterment of society. The show has enormous TRP and is one of the top-rated Zee Bangla serials.

Last but not least, we have Goyenda Ginni in our list of Zee Bangla serials 2021. The TV serial features middle-aged women who Policeman fancy by solving a crucial case. She is then offered the job of the investigator. Will she be able to balance her personal life and a new job? To know, do watch the serial today.

Zee Bangla is one of the most mist-loved TV channels. The Bengali TV channel caters to the Bengali audience. It airs many top-rated shows that have got huge TRPs in recent years. In this blog, we have curated a list of Zee Bangla serial time list 2022 along with their schedules that you can watch on the Zee Bangla channel. You can even watch them on ZEE 5. Also, do read our latest Blog on Zee Marathi serial list.

1. What are the Timings of “Sarbojaya” serial in zee Bangla?

The Zee Bangla Serial “Sarbojaya” is telecast from, Monday-Saturday at 9:00 PM.

2. Which are the most watched Zee Bangla serial?

4. When is the Zee Bangla serial repeat telecast time 2022?

The Zee Bangla serial repeat telecast time is mentioned in the above write-up.

5. When is the Lalkuthi serial repeat telecast time?

6. What are the names of Zee Bangla new serial?