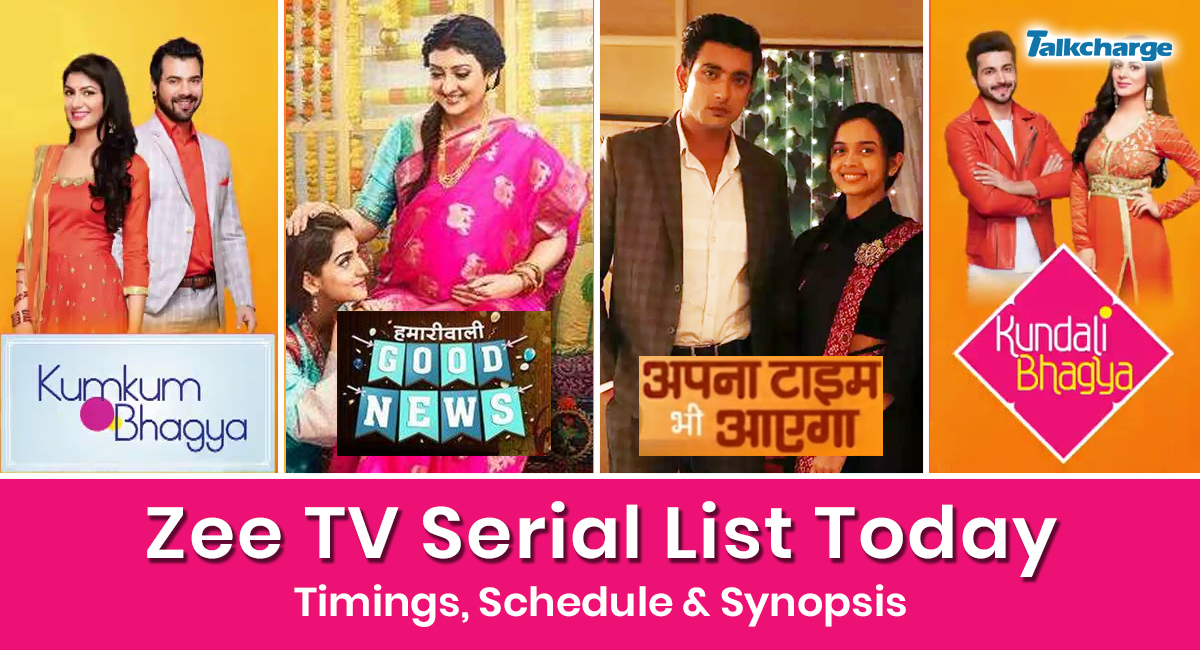 Zee TV was one of its kind Hindi language subscription channel. The channel is backed by Essel Group in India. It has been associated with many famous shows that got the channel huge TRPs over the year. Today Zee TV has become of the most-watched Hindi Entertainment channels in India and many parts of the world. For all the ardent fans of the channel here, we have curated Zee TV serial list along with their timings and synopsis.

First, on our list of best Zee TV serials is Kumkum Bhagya. The Indian drama television series started in the year 2014 and is one of India’s most loved serials. The show is based on Jane Austen’s novel -Sense and Sensibility-. The series started with Pragya and Bulbul and their mother –Sarla, who owns a matrimonial business and wishes to get both her daughters married in well-to-do families.

After all the struggles and tribulations, Pragya is married to rockstar Abhishek, fondly known as Abhi. Soon both fall in love with each other. On the other hand, Pragya’s younger sister Bulbul dies in a road accident. After the series of events, Abhishek and Pragya get separated, and the show saw a long leap of 20 years where new characters such as Abhi and Pragya’s daughters are introduced. Will Abhi and Pragya meet again? To know more, tune in to Zee TV at 9 PM.

Kundali Bhagya is a spin-off of Kumkum Bhagya. The show is part of the Zee TV serial list today. It is a tale of two sisters – Preeta and Shrishti, who meet their mother and two other sisters – Pragya and Bulbul, after many years. Soon both girls are introduced to the Luthra family. Preeta works as a physiotherapist for Luthra’s matriarch, whose grandson Karan is an established cricketer. On the other hand, Shrishti also finds a job in the same family. Karan and his brother –Rishab are two poles apart; however, they love each other. With time and as the story heads, both brothers fall in love with Preeta; however, Rishabh had to marry Sherlyn. In order to save Preeta from big trouble, Karan marries her but is still unknown of the fact that he has developed a love for her. What do you think will Karan confess his love for Preeta, or will she marry Prithvi? Find out in the upcoming episodes of Kundali Bhagya.

Next on the list of programs shown by Zee TV is Tujhse Hai Raabta. The show centers on the mother-daughter duo. Kalyani, a young teenager, is shattered when her birth mother dies, and she is forced to stay with her stepmother-Anupriya and her paternal family. Over the course of time, the girl develops feelings for Anupriya.

Kalyani’s cousin- Sampada, is married to ACP Malhar, who has a baby boy named Moksh. Sampada has a marital affair and runs away, leaving her baby. Moksh develops motherly feelings for Kalyani, and so Malhar forces  Kalyani to marry him. On seeing Kalyani’s love for Moksh and his family, Malhar soon realizes his mistake and starts feeling for Kalyani. Kalyani, too, falls for him. Even after many turns and tribulations, unfortunately, both part ways.

Qurbaan Hua is one of the latest shows that has been added to the Zee TV serial list 2022. The show features two different families. Chahat belongs to a Muslim family, and her father is a doctor. Another protagonist- Neel, is a Hindu. He hates his father as he cheated on his mother. Neel is fond of his sister, who he lost during an operation. Since Chahat’s father was operating on her; thus, he plans to take revenge against him and his family. In order to take revenge, Neel marries Chahat. Will Neel be successful in his plans?

Apna Time Bhi Aayega comes on the latest Zee TV show list. The drama is based on a young girl Rani who wishes to become an engineer. Her father works in an affluent family in Jaipur. Unknown to this, her destiny brings her to the same family. Later she is married to the elder son Veer, but no one accepts her. After all the trials and tribulations, Rani wins every one’s heart except Raani sa. The story of the serial has taken an exciting turn.

Hamari Wali Good News is one of Zee TV current serials, which first aired on 20th October 2020. This Hindi Television series is one of its kind, set in Agra, the story is about a middle-aged woman Renuka Tiwari and her family. After her son’s marriage, Tiwari wishes Navya (Renuka’s daughter-in-law) to soon give them the good news, however, she is unable to conceive. In order to help her, Renuka conveniences her husband to plan a baby and later give it to their son and daughter-in-law. What do you think? Will Renuka be able to give good news to the family, or would disappoint them?

In the Zee TV program list, this family drama has occupied one of the top places. This serial revolves around Jogi and Mahi, who are entirely different from each other. On one side, Jogi owns a dairy, and on another side, Mahi is an entrepreneur who aims to start a taxi service for women. Unknown to each other, their destiny brings them together but will they live together forever? To find out this and more, subscribe to the Zee TV channel.

After their failed marriage, Kuldeep and Shubhra decides to part in their ways but have to leave together for the sake of their kids-Roli and Rishi. Shubhra struggles to accept the fact that her husband has cheated on her and loves Samaira. On the other hand, Kuldeep is happy with his love of life. With more twists and turns, this show promises to keep you engrossed.

Starring Sushant Singh Rajput and Ankita Lokhande in the lead role, Pavitra Rishta is one of the famous Zee TV serials. The show completed more than 1400 episodes. The TV series was produced by Ekta Kapoor. The show went off-air in 2014 but still enjoys a huge fan base. This is the reason why the episodes of the serial are re-telecasted on the channel.

Adnan Khan and Eisha Singh, aka Zara Siddiqui and Kabir Ahmad, follow Islam. However, they both have their interpretation of the Quran. Kabir follows the traditional code of conduct; on the other hand, Zara believes in practically applying her teaching. Due to an agreement, both get married to each other. After knowing each other close, both confess their love for each other. Like every different love story, this love story too had separation and lots of drama.

Jodha Akbar was a periodic drama based on the life of the famous Mughal ruler- Akbar. The show was created by Ekta Kapoor and first premiered in 2013. After a successful run for two years, the show went off the air in the year 2015. It was one of the top-rated Zee TV shows. The serial had Rajat Tokas, Paridhi Sharma, and Lavina Tandon in lead roles. Jodha Akbar won many accolades and awards for their story, unique costumes, and respective characters.

Another popular name on the Zee TV serial 2022 is Jamai Raja. In the show, Durga Devi Patel, or DD played by Achint Kaur, is a leading jewelry designer. DD shares a cold relationship with her daughter Roshni (Nia Sharma). Siddharth Khurrana (Ravi Dubey ) falls in love with Roshni but hides his true identity. After all the confusion and drama, Roshni too falls for him without knowing his truth. The two got married and soon receives a jolt when Roshni finds the real truth about Sid. It was one of the most loved Zee TV serials. The show went off the air in the year 2017. However, the TV series with the same name and cast was released recently. The web series is available on free live TV apps like Zee5.

This is one of the most loved Indian Soap operas. The show gave us two shining stars of Tellywood, i.e., Divyanka Tripathi and Sharad Malhotra. It was released in the year 2006 and went off the air in 2009. The TV series focused on the simple- uneducated girl Vidya who is married to Sagar-son a businessman but was mentally disturbed. His step-sister -Sindoora conspires to take Sagar’s entire property and kill them. Undoubtedly, the show ranks at the top of the Zee TV serial list.

Produced by Rajshri Productions, Yha Mai Ghar Ghar Kheli is one of the top-rated serials on Zee TV. The Indian drama series was aired on Zee TV from 2009 to 2012. The show was well-received by the audience, and both the leading actors Suhasi Dhami and Karan Grover received immense love from the audience for the portrayal of their respective roles.

Abha, who is born to an illustrious family, finds out that her family is no more affluent, and soon they would have to leave their haveli. The leading lawyer- Jagmohan, buys the haveli. Abha works in the haveli as an employee and meets Karan. The two get in love with each other and fight against many odds to make their families happy.

Punar Vivah had Gurmeet Choudhary and Kratika Sengar as the main leads. It revolved around the life of Yash and Aarti. Yash is a widower and father of two little girls. Aarti is a divorcee and has a little boy. Though Yash does not want to get married as he still loves his wife but is forced to marry for his daughters’ sake. The two find a new life partner and gradually fall in love with each other.

Starting in the year 1992, Zee TV is one of the popular Hindi language entertainment channels with many sister channels like Zee Bangla and many others to name. It was formerly started as Zee Telefilms Ltd and later changed to Zee Entertainment Enterprises. The show has many serials to its fame. In this blog, we have curated the latest Zee TV serial list with times and their synopsis. Tune in to the channel to find out what’s happening in your favorite serials.

You can watch Zee TV serials on Zee5.

Kashibai Bajirao Ballal is telecasted at 10 PM on the channel.

3. What is Kundali Bhagya timing on Zee TV?

Kumkum Bhagya is telecasted at 9:00 PM.

5. Which TV show has the highest TRP?

Shows like Kumkum Bhagya, Kundali Bhagya, and Bhagya Lakshmi have the highest TRPs.

6. What is Kumkum Bhagya time on Zee TV?

Kumkum Bhagya is telecasted from Monday to Friday at 9 PM on Zee TV.

The serial Hamariwali Good News is telecasted at 7:30 on Zee TV.