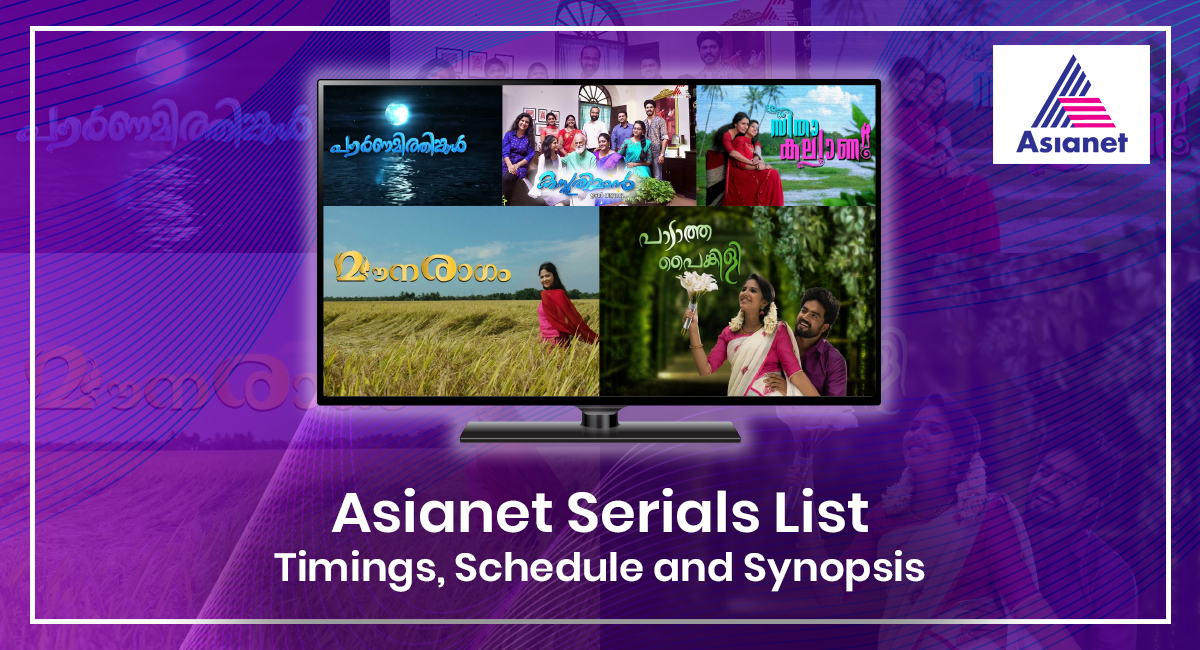 South India is known for its fantastic storytelling, be it in the form of movies or serials. You need not worry about finding the series if you are a fan of South Indian films, especially Malayalam stories. Asianet is a Malayalam entertainment channel with an array of different series. Recently, ‘Disney Hotstar’ has taken up the task of broadcasting memorable Malayalam serials. You can also check the Tamil serial list and timing. In this blog, we have curated an Asianet serials list. You will find three tables here, one for the morning, the second for the afternoon, and the other for the evening.

The famous Malayalam entertainment channel has a long list of serials in the genre of drama, thrill, and romance. If you have been a fan of the Asianet old serials list, you will be even more excited to watch the new Asianet serials. Here we have listed the most-watched Asianet serial names with their synopsis to help you decide which serial you can start watching.

The Asianet TV serial Kudumba Vilakku shows the true reality of a woman who is a homemaker. The story revolves around a virtuous woman who is dutiful and responsible. She plays the role of being a wife, mother, and daughter-in-love dedicatedly, yet no one appreciates it. Her husband and children do not value her work, and her in-laws are always after her flaws.

The next name in the Asianet serials list 2022 is Mounaragam. The serial revolves around a girl who is born dumb and is rejected. When she was in her mother’s womb, her father gave her poison; thus, she was born with a hearing impairment. Even when she was born, her father has a cold feeling towards her, which concerns the girl. She is very hardworking and does all the household chores. After that, she goes door to door to sell milk. In her tough life, a boy named Kiran shows interest in her and follows her. The girl is oblivious to the loved shown by Kiran and, at the same time, longs for her father’s love.

Seetha Kalyanam is a story of two sisters named Seetha and Swathy. Seetha is the elder sister and very protective of her younger sister, Swathy. There is an antagonist named Rajesh and a rival of Seetha. They both are a millionaire and cannot stand each other. Rajesh is envious of her and tries everything to bring her down. He also made her lose her job. However, Rajesh’s Youngest son and Swathy fell in love, and Swathy got pregnant. Also, Rajesh’s elder son falls in love with Seetha. This criss-cross plot twist is engaging to watch. This thrilling storyline has gained many viewers on the list of Asianet Serials.

This TV serial is very engaging and captivating. The story originates when a boy and girl fall in love at a young age, but they got separated and married to others. They are now leading respective families, and they happen to meet after 25 years. The man has died of cancer, and he asks the woman to take care of her daughter. Later she takes his daughter to her house and asks her son to marry him. This trouble flourishes into great drama. This storyline leads to a situational crisis and engages the audience. It is one of the most liked TV programs shown by Asianet.

This Malayalam TV serial portrays the story of a mother-daughter relationship and separation. This is not a regular sweet family story but brings up a different dimension of motherhood. The daughter goes on to search for her mother through a difficult situation. There are doubts and anxiety about meeting her mother. They lead to the following exciting episodes. It is one of the best shows in the Asianet serials list because of its excellent storyline.

The story revolves around a young woman Meena who is captured by a Zamindar who is a womanizer. She is very depressed and decides to take her life. When she is attempting suicide, an elderly couple comes to rescue her and finally adopts her. They tried to make her life better, and they wished to get her married to their nephew. The arranged marriage was set, and on the wedding day, another man comes into the picture and claims Meena as his wife.

Meena rejects to recognize him, yet she is arrested in an attempt to murder Zamindar. Meena and her adoptive brother try to solve the mystery. Meanwhile, she runs away from the family due to these pressurizing situations.  The story flows smoothly, and one thing leads to another. This is an exciting show on the Asianet TV series list.  If you love romantic movies, you can go ahead and watch the top Tamil serials as well.

The story of this Asianet serial today revolves around a young man and his junior girl, Priyamvada. The young man, Srijan is ambitious to become an IAS, but his rich father has gone bankrupt and cannot pay the examination fees. Priya followed her and realized that he belongs to a rich family and thinks he is out of her reach but developed a soft corner. One day Srijan went to his dad’s friend’s house and saw that Priya is working there. This whole twist of the story has revealed their characteristics, and the boy develops a soft corner for her. This is one of the most loved serials on the Asianet Serials List.

There is no boundary between Radha’s love and loyalty to Krishna. This timeless love story has found a new vessel in this TV serial. The story of Mahabharata takes a slow turn and focuses on a new way of putting it. The epic saga has the characters of Krishna, Pandavas, Kunti, and Draupadi. After a well-known mythological game of dice, Draupadi marries five Pandavas on the blind order of Kunti. These brother goes back to Hastinapura and fails to co-exist with their cousins- Kauravas. These stories are spread in two seasons, and you will enjoy the watch of the timeless story.

There are many regional language entertainment channels that you won’t find in mainstream channels. There are Marathi, Tamil, and Bengali serial channels. Likewise, Asianet is Malayalam serial channel that shows amazing shows and stories. In this blog, we have listed the show timing and days of Asianet’s new serials as well as old ones. Generally, the Asianet program list shows the series from Monday to Friday, and the weekends are reserved for movies and reality shows. We hope you like these serials and never miss your favorite shows.

1. What is Asianet today schedule for Sasneham?

It is telecasted at 4:00 PM from Monday to Friday.

2. What is the Asianet schedule for Kudumbavilakku?

You can watch Kudumbavilakku from 8 pm to 8:30 pm all weekdays.

3. What is Asianet Mounaragam serial time for today?

4. What is Asianet’s schedule today for the latest serial Koodevide?

5. What is Santhwanam serial time today?

The Asianet show timings for the serial Santhwanam are 7:00 pm to 7:30 pm.

6. What are some well-known Asianet old serials?

7. What is Palunku serial time?