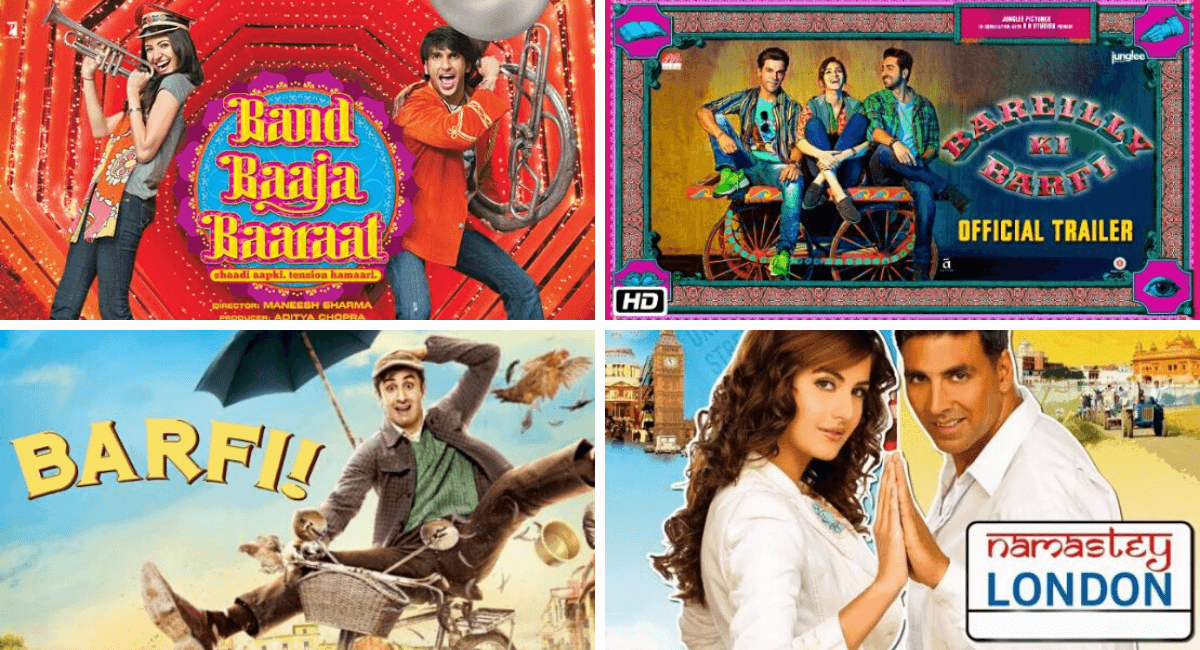 Talking about the love story, the first movie that comes to our mind is Dilwale Dulhania Le Jayenge was. Isn’t it! While the movie was way ahead of its time, it explored different aspects of life. After all the struggle and hatred, Raj and Simran got united in the movie. Taking the cue from DDLJ, there were a plethora of romantic film released in the ’90s and 2000s amongst which Shah Rukh Khan’s film was prominent and was soon termed as King of Romance.

With the change in the generation, the story lives have changed; however, the meaning of remains the same for the years. The best thing about Bollywood movies is that they take to a new world, though the world lasts for merely 3 hours, that’s how life is, you have to move on. With the change in time, we have new directors like Imtiaz Ali, Anurag Basu, and Manish Sharma, who have taken cinema a notch high. A romantic movie like Barfi was even sent for the nomination of the Best movie category for Oscars. In this blog, we have curated top 15 romantic movies that every Bollywood lover must watch at least once in a lifetime

While the movie has nothing fancy about it, but its star cast and the appealing story made all the difference. Bareilly Ki Barfi stands out from the crowd and has made a special mark. The movie has excellent actors like Rajkumar Rao, Ayushman Khurana, and Kirti Sanon, who time and again proved that Bareilly Ki Barfi is a must-watch.

Masaan was an unconventional love story that had no happy ending. Set in Varanasi, Uttar Pradesh, the movie’s plot followed two separate stories and eventually converges. The film won many hearts and awards too. If you haven’t watched the movie yet, you can watch it on the Netflix.

Does love change with time? Watch Tamasha to find out the answer. The story of the movie revolved around two youngsters who fall in love with each other on holiday, however, soon they part, and when they meet, again they could not connect. In the movie, they both releases love for each other and how their passion is equally important to sustain life.

In-country like India, where it’s a big no to marry a girl who does not belong to the same caste, A Punjabi boy played by Arjun Kapoor falls in love with Tamilian girl, Aliya Bhatt. The two had their ups and downs while bringing both the families together. Two states was one of the best movies, and thus, it is in our list of top 15 romantic movies for Bollywood lovers.

YJHD was a refreshing take on friendship and love. Like typical romantic movies, the film did not highlight the importance of scarifies. Infect it taught our generation how love and passion could move hand in hand. From the most loved couple of our age – Deepika Padukone and Ranbir Kapoor, the best of the songs, the movie had every element, which makes it one of Bollywood’s best romantic movies.

Barfi was one of the flawless movies that showcased the true meaning of love. The movie gave the message that love has no language. All you need to have is a heart to heart connection with your partner. The film explored the relationship of an autistic girl and deaf and mute boy, they needed no one to accomplish their love for another.

The movie speaks about the new-age love triangle to which we all can relate. Veronica, who loves Gautam, is heartbroken when she realizes that Gautam loves her best friend, Meera. Knowing the truth, Veronica wanted Gautam in her life but soon realizes what wrong she was going to commit.

Who all can be related to the R Madhavan’s character Manu, who made every stone unturned to make his love of life with her love of life? As the movie progresses, Kangana herself releases her feeling for R. Madhvan. The film was loved by the audience, owing to which directors came up with part two that delves into the life of both primary characters after the marriage.

Band Baaja Baaraat is a simple love story of two wedding planners who are partners at one time and competitors in the second half of the movie; however, they soon both released their love for each other. Besides the love story, you will see a confidant and independent girl who accomplishes her dream of becoming a wedding planner.

Love Aaj Kal was a romantic -comedy-drama that two different stories from different eras. Where one story is all about new-age love, the second story is about love in olden times. With the distinctive storylines and amazing star cast, the movie was a hit at the box office and gained a huge fanbase.

This rom-com has a colossal fanship. All thanks to its unique story and amazing star cast. The movie centers on the Punjabi boy who falls in love with a British girl and soon marries her; however, the British girl refuses to accept the marriage and instead wants to marry a Britisher. Thankfully, she realizes her love for the Indian boy and chose him as her life partner.

Jab We Met was Imtiaz Ali’s best movies of our generation. The movie explored the new aspect of love and life. The Feisty Punjabi girl, Geet became everyone’s favorite, and the movie was a super hit of its time. While most of us could Relate to Bubbly Geet, It was Aditya who won her hearts.

Salaam Namaste was probably the first Bollywood movie that had a theme of live-in relationship. The story was about two Indians who live in Melbourne. As love bloom, they both start living with each other and explore the cons and pros of living with eachother. The movie was a through entertainer, and thus it has made in our list of Top 15 romantic movies for Bollywood lovers.

No list of best romantic movies of Bollywood movies is complete without the King of Romance- Shah Rukh Khans, movie. Kal Ho Naa Ho was an exceptional movie for many of us. It taught about meanings of love. The film was commercially successful and rested in our list of top 15 romantic movies that Bollywood lovers should watch.

Undoubtedly, Rehna Hai Tere Dil Mein is one of the best romantic movies of Bollywood. The film showed a love story in a unique manner. Maddy- R Madhavan’s character made us believe the concept of first sight love. It is one of the classic romantics that one should watch.

Bollywood movies are a reflection of real life. However, there are a few genres that much glorify like romance. Many hit lovers’ stories have left a special impact on the audience. In this list, we have compiled the top 15 romantic movies of our times that every Bollywood lover should watch.