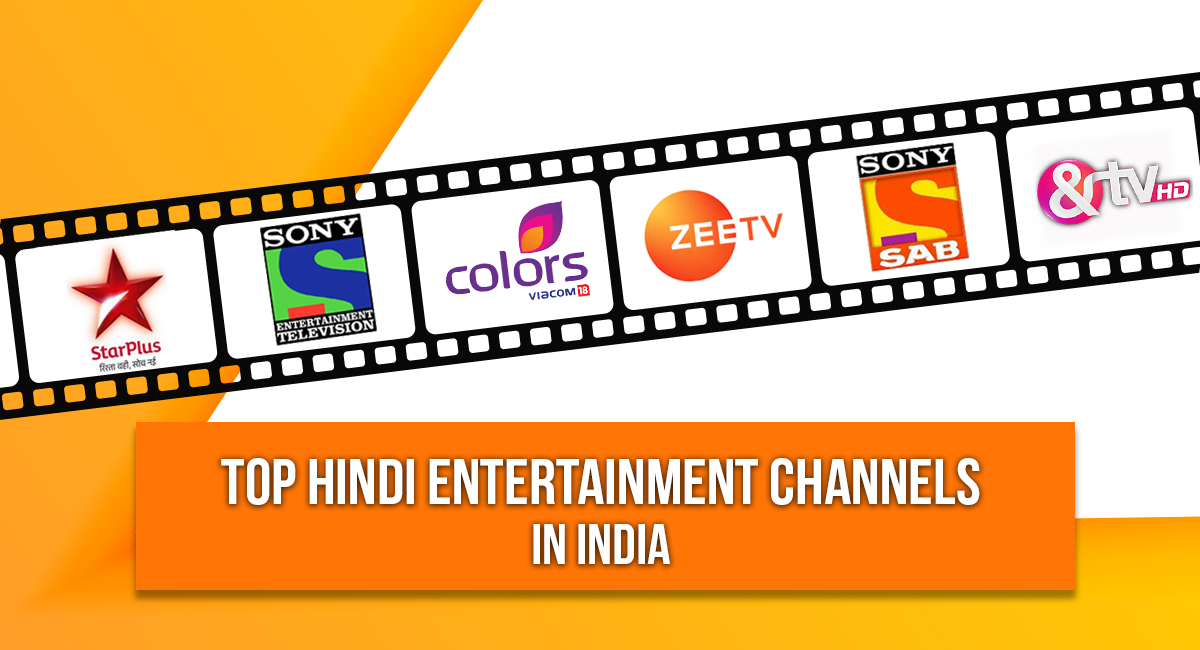 Hindi entertainment channels are a prime part of our lives. Indian TV channels are known for the array of stories that showcases a blend of our culture in the best way possible. While we all have our favorite channels, they are a few Hindi channels that have hooked their audience ever since the time they were introduced. DD National was the first channel launched in India that struck a chord with an Indian audience with its array of TV shows targeted at the general audience.

With the invention of cable TV in India, channels like Star Plus and ZEE TV were introduced. Within a few months, these channels received enormous popularity and became part of every household. Whether you are an ardent fan of soap operas or reality shows, Hindi entertainment channels are bliss for everyone. Here we have curated the top 10 Hindi entertainment channels in India that have touched the glory over the years.

With its headquarters in Mumbai, Sony Entertainment Television is one of the well-known Hindi channels that airs a vast number of TV serials. The channel is owned by Sony Pictures Networks. It started in the year 1995 and has some of the best TV serials such as Crime Petrol, Kaun Banega Crorepati, Indian Idol, Jassi Jaisi Koi Nahin, Jhalak Dikhhla Jaa, and many other shows that have won the hearts of audiences over the year. Sony Pictures Television has a handful of subsidiaries in India that includes Sony TV and SET. The channel targets family audiences and mainly has TV serials that revolve around genres like Thriller, Comedy, Reality, Horror, etc.

Next on our list of top Hindi entertainment channels in India is Colors Viacom 18. The Mumbai-based channel was started in the year 2008 with pivotal serials, which got immense popularity and won many well-known awards as well. One of the reality shows that has gained enormous popularity on Colors is Khatron Ke Khiladi and Big Boss. Family dramas like Balika Vadhu, Uttaran, and Na Aana Is Des Laado have made the channel one of the top-rated Hindi Channels with humongous TRPs. Do check out the list of shows that are premiered on Colors TV.

Known to be an India-based satellite television channel, Zee TV is backed by Zee Entertainment Enterprises and has its headquarters in Mumbai. It broadcasts various shows in Hindi and regional languages. Besides India, the channel is also available in other parts of the world that including the Middle East, South Asia, Europe, East Asia, North America, and many more to name. The channel was introduced in the year 1992 and was the first Hindi satellite channel. Some of the channel’s famous TV serials are Kumkum Bhagya, Sa Re Ga Ma Pa, Pavitra Rishta, Jodha Akbar, Hum Paanch, Banoo Main Teri Dulhann, Amanat, Jhansi Ki Rani, etc.

Formerly known as SAB TV, Sony SAB is one of the leading Hindi entertainment channels in India. The channel was introduced in the year 2000 and the year 2005 it was possessed by Sony Entertainment Television, and since then the channel has been featuring youth-oriented shows. Taarak Mehta Ka Ooltah Chashmah is one of the longest-running shows and one of the flagships of the channel. Other shows that have garnered a huge TRP are Aladdin: Naam Toh Suna Hoga, Baalveer Returns, and Tenali Rama.

Started in the year 2015, &TV is one of the best TV channels in India. Zee Entertainment Enterprise owns the channel. Some of the shows that received huge TRP across the globe are Santoshi Maa, Ganga, and Bhagyalaxmi. The channel is also available on a live channel like ZEE 5. In the last couple of years, the channel has become one of the most viewed channels in the country with increased viewership.

This channel is bliss for all the movie buffs out there. The channel is known for its Hindi movies. It is a Hindi-based satellite film channel backed by the Zee entertainment enterprise. The enterprise is part of the Essel Group. The channel is broadcasted in several countries across the globe. Zee Cinema was founded in 1995 as a part of Star TV; however, both companies soon parted away. The channel is an ideal place to binge-watch all types of cinematic bliss. One can watch Hindi and regional movies dubbed in Hindi 24/7.

Introduced in the year 2017, Star Bharat is owned by Star India and is a part of the Walt Disney Company India. The channel is primarily known for historical, mythological, crime, and comedy shows. Star Bharat was formerly known as Life Ok an and Devo k Dev Mahadev was among the first serials telecasted on the channel. The mythological serial was a huge hit. Before Life Ok, the channel was famous as Star One, which was synonymous with serials like Sarabhai Vs. Sarabhai and Remix. It was an Indian subscription- television youth channel that was the first broadcast in the year 2004. In the year 2006, the channel was launched in the UK ON sky.

Dangal is one of the leading Hindi Entertainment channels in India. The channel broadcasts original programs along with famous shows on popular channels. The channel is also among the most-watched Hindi language channel in the category of U+R since later 2019. Dangal is owned by Enterr10 Television Pvt. Ltd. Initially, the channel was broadcasted as the Bhojpuri channel. However, after receiving immense popularity, the channel was turned into a general entertainment Hindi channel. The channel started with the mythological serial Jai Shri Krishna. The channel also broadcasts some of the popular TV serials of channels like Colors, Zee TV, and others. TV shows like CIF, Crime Alert, Shiv Arjun: Ek Ichchadhari Ki Dastan (first prime time daily soap), Bahurani are to name a few original shows on the channel.

DD National is the oldest Hindi entertainment channel in India. The channel is backed by Doordarshan and was started in the year 1959. It is a state-owned entertainment channel and the flagship channel of Doordarshan. Shows like Hum log, Mahabharat, Ramayan, Nukkad, Street Hawk, and Circus are some of the TV serials that were liked by the audience. During the COVID-19, when other leading channels stopped airing the fresh episodes of their serials, DD National re-telecasted their blockbuster shows such as Ramayana,  Shaktimaan, Shrimaan Shrimati, Shahrukh Khan’s Circus, Byomkesh Bakshi, Chanakya, Dekh Bhai Dekh. Ramayan and Mahabharat created history by gaining huge viewership.

Ever since TV was introduced, entertainment channels received immense popularity. With the change in time, new channels have been added, and many of them have bid adieu a long back. In order to entice its audience, every channel is coming up with the best content that reflects its ideologies. Here we have curated some of the best Hindi entertainment channels that have taken the country by storm. Do let us know which is your favorite channel?