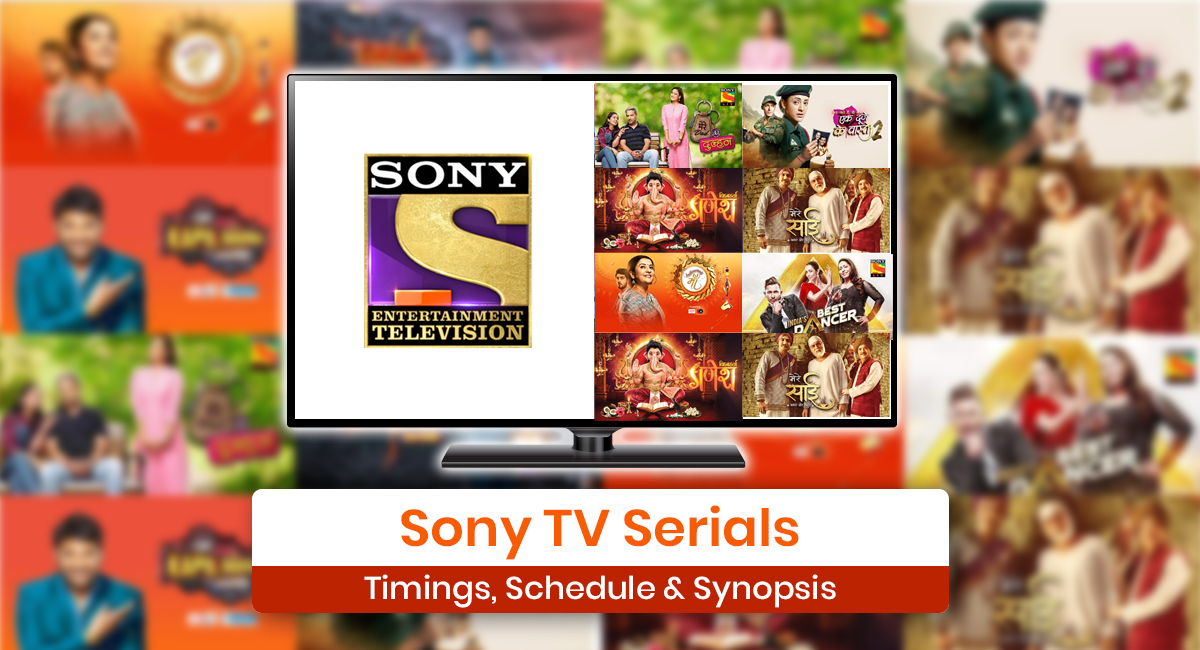 Sony Entertainment Television, a.k.a. Sony TV is one of the oldest Hindi entertainment channels that air in India and many parts of the world. The channel was launched in the year 1995, and since then, it has been one of the most-watched TV channels. The channel has produced many iconic serials that include Kaun Banega Crorepati, C.I.D., Boogie Woogie, Crime Patrol, and many more to name. In the year 2011, the channel first changed its logo and subsequently, in 2017. Here we have compiled the Sony TV serials list along with their timings, schedule, and synopsis.

This Sony TV serial narrates the life of the Sai Baba of Shirdi, who solved the problems of people living in the Shirdi village in a distinguished way. On the contrary, Kulkarni is jealous of him and tries every bit to reduce people’s faith in him. However, Sai corrects him and others without bringing any ill-thought for them

Vighnaharta Ganesha is based on the life of Lord Ganesha, who is born to Lord Shiva and Goddess Parvati as Vinayak. However, soon he is renamed as Vighnaharta. The show narrates stories of Lord Ganesh’s incarnations and other deities who played a pivotal role in Hindu mythology. It is one of the top-rated Sony TV serials 2022.

The latest show to be added to the Sony TV serials list is India waali Maa. This is one of the new serials to be telecasted on Sony entertainment channel. The show concentrates on the emotional bond that a mother and son share. The serial will showcases all the challenges that a mother faces to help her kid, whether it is with in the country or the foreign country. Undoubtedly it comes under the category of one of the best Sony TV shows 2022.

Next in the list of Sony serials 2022 is Mere Dad ki Dulhan. The serial focuses on the daughter and father’s bond. Amber Sharma, who is a widower and has been living with her daughter- Nia. Nia gets an opportunity at a professional front to Shift U.S. However, she fears for her father’s well-being and thus wants him to get married. On the other hand, Guneet, a 40-year-old woman, looks for a rented house and shifts to Amber Sharma’s house. The two then fall in love. However, Nia is clueless about their relationship.

The story of this Sony TV serial revolves around teenage love. Shravan and Suman Tiwari are fondly in love with each other since childhood; however, they have to separate to shape their careers further. After a few years, both meet again. Will Shravan and Suman fall in love again?

India’s Best Dancer is a dance reality show with ace choreographers and celebrities like Malaika Arora, Geeta Kapoor, and Terence Lewis as judges. Dancers from across the country showcase their talent, and in the end, the best amongst them would win the title of India’s Best Dancer. Owing to its fan base, this show is added in the Sony TV serials list 2022.

This is one of the top-rated Sony TV serials. The show is presented by the ace comedian and actor Kapil Sharma and is currently judged by Archana Puran Singh. The show is broadcast on the weekends- Saturday and Sunday. Celebrities from TV, movies, sports, and different genres visit the show as the guest. Every episode unfolds with comic skits and celebrity interviews.

Last but not least, we have Indian Idol in the Sony TV serials list. This year, the reality TV show completed its 12 seasons. The show was judged by the leading singers and composers- Neha Kakkar and Vishal Dadlani. People from around the country participate in the show, and participants with the best singing talent move ahead; there is a single winner at the end who is titled as Indian Idol.

There have been numerous Sony TV shows that have enjoyed colossal T.R.P. Some of them are still remembered for their unique storyline and their distinguished characters. Here we have curated the best of the Sony TV serials that have ruled the TV industry.

Created by Ekta Kapoor, KKusum was one of the best shows that fall in the Sony TV serials list. The show had Nausheen Ali Sardar and Anuj Saxena in the lead. It was a story of a simple girl who gets married to the men who do not love. However, her caring and loving behavior make his husband fall in love with her.

Starring real-life couples Hiten Tejvani and Gauri, the show was based on Pratham and Gauri’s relationship. Pratham marries Gauri to take the revenge, and Gauri takes on the challenge. After struggling many odds, both fall in love. The show also had a sequel with the same name and the same leading actors.

Kya Hadsaa Kya Haqeeqat was an Indian anthology TV show that aired from 2002 to 2004. The show featured numerous small stories in the mini format. The show had leading TV actors like Hiten Tejvani, Rajeev Khandelwal, Cezanne Khan, and many others to name.

Next in the list of best Sony TV serials is classic Comedy and family drama Family No.1. The show featured two families who lived under one roof. Both families are different from each other. Both families have single parents and three kids. Over time, both families go through a bundle of comic situations and end up being friends with each other. The show had celebrated TV actors like Kanwaljeet Singh and Tanvi Azmi in the lead roles.

Starring Mona Singh and Apurva Agnihotri in the lead, Jassi Jaissi Koi Nahin brought a revolution in the TV industry. The show enjoyed huge T.R.P. ever since it was first telecasted. Mona Singh played the role of Jassi, who was timid yet smart. She has been rejected by society because of her looks but was supported by her father and best friend Nandu, played by Gaurav Gera. The show saw how Jassi became and successful entrepreneur.

Dekh Bhai Dekh was undoubtedly, one of the cult classics TV series that initially aired on the D.D. Metro. Seeing its popularity, the show was rerun on Sony Entertainment Television. The show was based on the extended family that has three generations. The show takes it viewers through various ups and downs that are dealt with in the most humorous ways.

Aahat was an Indian horror television serious that first premiered in the year 1995. Many well-known artists such as Om Puri, Tom Alter, Mandira Bedi, Ashutosh Rana, and many more to name have been part of the show. The show has six seasons and ended in the year 2015. Over the years, this Sony TV show enjoyed massive T.R.P.

Bade Achhe Lagte hai was a Hindi drama soap opera that was based on the Gujarati play Patrani. Unlike most TV serials with young couples, the show has a middle-aged couple-Ram and Priya, who has taken care of their respective families over the years and do not get married. However, destiny had some other plans. Ram and Priya meet each other at a family reunion and are forced to get married. Subsequently, they fall in love.

The first season of the show was released in 2016, which had Jennifer Winget, Kushal Tandon, and Aneri Vajani in the lead. The romantic thriller concentrates on Maya’s life, who does not like colors because of her abusive childhood. She falls in love with Arjun and tries every bit possible to free him from his family and his best friend.

Seeing the popularity of the first season, the second season was premiered in 2019. However, due to the Coronavirus pandemic, the show ended abruptly.

CID was one of the long-running Indian TV serials. It was garnered a massive fan following for more than a decade. The TV series was about Mumbai’s Crime Investigation Department. Characters like Daya, Abhijeet, and Dinesh Phadnis go huge popularity. People still remember its iconic dialogue- ‘’Daya daal mai kuchh Kala hai’’. The show completed more than 1000 episodes and was last aired in the year 2018.

It is a Hindi crime anthology that is majorly hosted by Anup Soni. The show is now known as Crime Patrol Satrak. Every episode of the show starts with the new story that revolves around murder, harassment, and kidnapping. The presenter of the show also shares correct measures with the audience to avert the heinous crimes. Over the years, the show has gained immense popularity, and thus, it has made its way to the best Sony TV serials list.

Known to be one of the leading Hindi entertainment channels, Sony TV has a plethora of serials that have, over the years, made their ways in Indian households. Shows like C.I.D. and crime patrol have been long-running shows on the TV, and Sony TV serials like The Kapil Sharma show are counted amongst the best comedy serials. That’s not its former serials like Kkusum are still remembered for the unique storyline and characters.

1. Which show is going off-air on Sony TV?

Beyhadh 2, Patiala Babes, and Ishaaron Ishaaron have ended abruptly due to the coronavirus.

2. Which new serial is coming on Sony TV?

Yashomati Maiyaa Ka Nandlala is one of the new serials that is going to get premiered on Sony TV.

4. Which serial has the highest T.R.P. on Sony TV?

The Kapil Sharma Show has the highest T.R.P. on Sony TV.