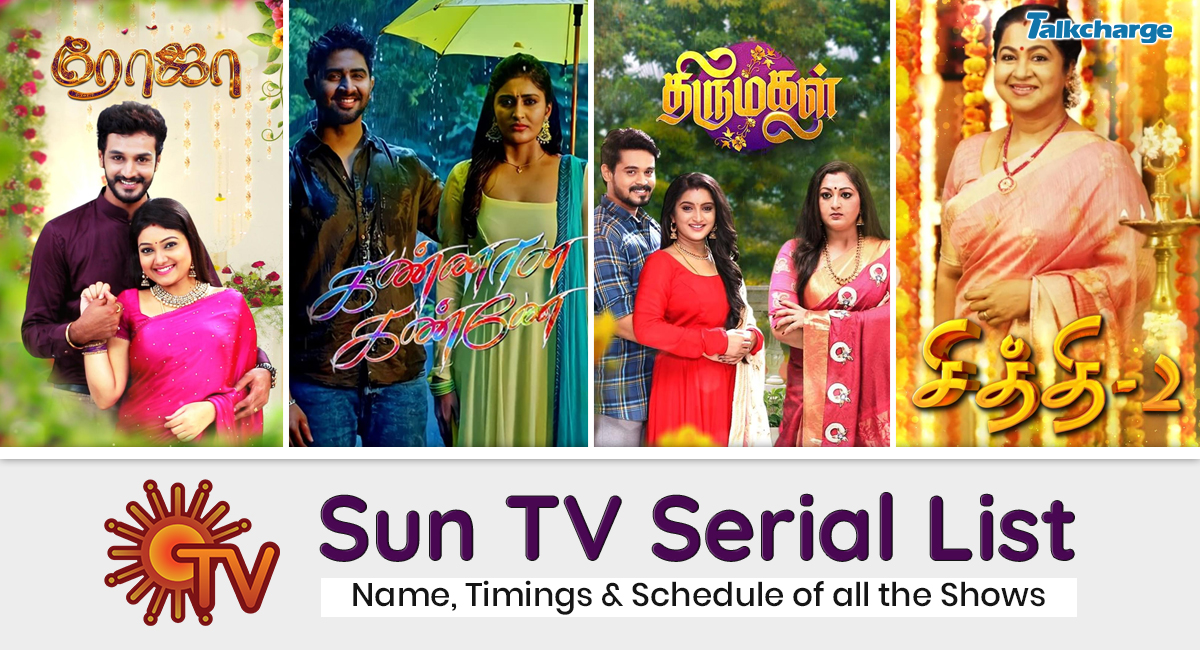 The HD version of the channel was introduced in 2011 that has helped the channel increased its viewership over the years. Sun TV broadcasts shows ranging from family drama, love stories, reality shows etc., that have kept the audience hooked to the channel. Some of its serials, like Roja, enjoy the highest TRP. Below we have curated the famous Sun TV serial list along with their timings, star cast and storyline. Besides watch them on TV, you can also watch SunTV serials LIVE on Sun NXT, its official digital platform.

The first name on the Sun TV serial list 2022 is ‘Sevanthhi’. The storyline of this latest show revolves around Sevanthi, who is hitched to Arjun. She gets introduced to her long-lost family. Anu takes away her identity as Chandrakanth’s daughter & cheated on the family.

The story of this Sun TV new serial explores around two friends, Aadhi and Pavithra. The emotional bonding and true friendship annoys their families. However, their friendship still grows stronger against all odds.

Another name on the Sun TV serial 2022 list is Ethirneechal. This Tamil drama TV series has recently started to stream on Sun NXT. As per the plot of the story, Janani and three of her sisters, Eshwari, Renuka, and Nandhini, have good academic backgrounds, whereas their husbands are not educated. All of their husbands don’t like them to work. Janani got hitched to Sakthivel, who is truthful. She is unaware of the truth about the Aadhi brothers and thinks that all her sisters, Eshwari, Renuka, and Nandhini, are working while, in reality, all of them are housewives.

Roja is one of the top-rated shows in the Sun TV serial name list 2022. The family drama airs at 9 PM from Monday to Saturday. This soap opera premiered on 9 April 2018 and has completed more than 900 episodes. Sun TV serial, Roja features well-known Tamil actress Priyanka Nalkari, who plays a role of an orphanage girl, Roja. The show follows the life journey and struggles faced by Roja from childhood.

Next on our list of Sun TV serials is Vanathai Pola. This famous TV series started in December 2020, and by now, it has completed over 200 episodes. This Tamil series showcases the bond of a brother and sister. The show has Thaman Kumar as Chinrasu and Debjani Modak as Sandhya in pivotal roles. You can watch this serial life on the official YouTube channel of Sun TV or Sun Nxt or tune in to the channel at 8:00 PM to know the forthcoming story of the show.

Kanana Kanne is one of the most-watched program in the Sun TV tamil serial name list. The serial is also popular for its leading actor and actress-Rahul Ravi, Akshita Bopaiah, Nimehsika and Nithya Das. The story of the show is youth-centric! It focuses on the struggles of Meera, as a daughter whose father hates her upon her mother’s death. Watch her story online on MX player or Tune in to Sun TV at 8:30 PM from Monday to Saturday.

Starting in 2014, Chandralekha is one of the oldest Sun TV serials. The show stars Shwetha Bandekar, Naagasri GS and Sandhya Jagarlamudi in the key roles. The family drama revolves around two sisters, Meena and Vasundhara, who gave birth to Lekha and Chandra. Both babies switched at birth. Years later, the show follows their life story and demonstrates how they are connected. Watch this Sun TV serial today at 2 PM from Monday to Saturday. You can also watch it online on MX player and YouTube.

Sun TV Serial List also includes Thirumagal, a soap opera that revolves around a middle-class girl, Anjali, who is married to Raja. In the later episodes, she finds that Raja’s mother, i.e., Aishwarya is her birth mother, and Raja is Bhavani’s son (Anjali’s mother). Will she tell the truth to the family? Get ready for interesting turns and twists you will soon see in the show. This soap opera is broadcasted from Monday to Saturday at 12:30 in the afternoon.

Nagini is the dubbed version of Colors TV famous serial Naagin. This supernatural show traces the lives of ‘ichchadhari’ naagins in its several seasons. Since the show’s original version went high on the TRP, Sun Network bought its TRP. The last season of the Nagini went off the air a few months back.

How can we miss Chithi 2 in our best Sun TV serial list! It is one of the most-watched shows on the channel. It has completed more than 300 episodes. The show initially revolved around Sharadha, a deep-rooted and family-oriented woman! She has to marry her brother in law after her sister elopes with her lover. Years after, the focus of the story shift to Sharadha’s adapted daughter Venba. This serial was last telecasted on May 2022 but still has occupied position in the Sun TV serial name list.

Kanmani is an old Sun TV serial that started in October 2018 and went off the air in November 2020. It was one of the top-rated Sun TV old serials. The soap opera was a story of Kannan, who fell in love with his niece, Soundarya. Soon Kannan discovers that Soundarya loves Akash and tries his best to unite them.

Pandava Illam is another popular Tamil language drama series that airs at 11:30 PM only on Sun TV. This family drama centers around Periya Sundaram and his five grandsons, who pledge not to marry in their lifetime. But what will happen when Sundarams discover that one of the grandsons- Kutty Sundaram Pandavar wants to marry Ms. Kayalvizhi, a well-known boxer? Ms. Kayalvizhi is played by Papri Ghosh, one of the famous Tamil serial actresses. The show is also available online on YouTube and MX player.

Jothi TV series is a life saga of a woman, Jothi, who possess the qualities of snakes and human. Unknown to her snake powers, Jothi struggles to find her real identity. This supernatural show was one of the highest TRP gainers. It is a sequel to Nandhini, one of the famous shows on Sun TV. The show went off the air in August 2021, but you can still watch it online on MX player.

Premiered on 21 October 2019, Magarasi is one of the best Sun TV serial names. This Sun TV serial timings are 12:00 PM, and you can watch its repeat telecast on the next day at 12 AM. Magarasi is a story of two strangers, Tamizh and Bharathi, who met on a train and later decided to help each other. Will they ever know that they are connected to each other? Find out this and lots more in the upcoming episodes of Magarasi.

This is yet, one of the popular shows on the Sun TV Tamil serial.. After running for around two years, the show went off the air in November 2020. Kalyana Veedu revolved around Gopim, who worked hard to provide her family a good life. After getting tested repeatedly by her luck, she finally gets all the happiness she deserves. If you have missed any serial episode, you can watch it online on YouTube.

Vinayagar is a Tamil dubbed version of former Sony TV’s mythological show Vighnaharta Ganesha that demonstrates the life chronicles of lord Ganesha. You can watch the episodes of the show online on YouTube.

The family drama aired on Sun TV from February 2018 to October 2020. The show received immense popularity, owing to its story and star cast. It had two seasons.

This culinary reality show is inspired by MasterChef Australia. The show is hosted by actor and producer MasterChef Australia and has three judges, i.e., Harish Rao, Aarthi Sampath, and Koushik S. The show’s winner will be given ₹ 25 00,000 in cash and the MasterChef trophy along with their restaurant. The latest season of the show started on 7 August 2021.

It is a couple-based game show with several interesting segments. Each couple is given certain tasks and is judged based on the chemistry they share.

Sun TV is a top Tamil language channel in India and many other countries like the United States, Malaysia, Canada, Sri Lanka, Singapore, Sri Lanka, Canada, and Australia, for its rich content. Some of its famous serials are Roja, Vanathai Pola, Kannana Kanne, Magarasi, and many more.

1. What is Roja serial timings on the Sun TV channel?

You can watch a fresh episode of the Roja serial at 9 PM from Monday to Saturday.

2. What are the timings of the Chandralekha serial?

You can watch Chandralekha at 2 PM from Monday to Saturday on Sun TV.

4. Where can I watch Sun TV serials online?

You can watch all the serials of Sun TV channels online on Sun NXT, YouTube, and MX player.