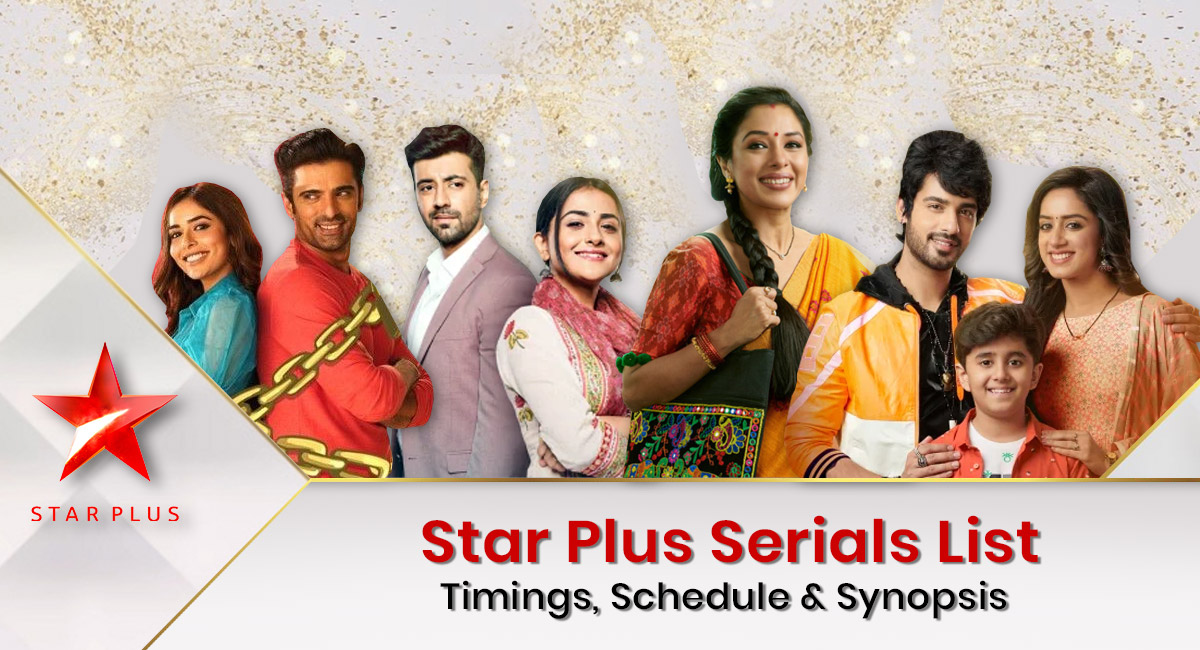 Owned by Star India Network, Star Plus is one of the oldest and most-watched entertainment channels in India. The channel has broadcasted many popular shows like Kyunki Saas Bhi Kabhi Bahu Thi, Diya Aur Baati Hum, Yeh Hai Mohabbatein, Yeh Rishta Kya Kehlata Hai, and many others. These TV shows became the talk of the town because of their intriguing stories and impressive characters. Here we have compiled Star Plus Serial List 2022. You can watch these serials on the Disney+Hotstar App or Website as well.

This is a new name that has come in the Star Plus drama list 2022. It went on air from 21st Dec 2020 onwards. The show revolves around 2 adults who are completely in contrast with each other. Shaurya is a modern-day man who believes that women shouldn’t be educated. On the other hand, Anokhi is a headstrong and ambitious woman who plans to leave a mark on society.

Will Anokhi be able to change the mindset of Shaurya while carving a niche for herself, to know this and lots more, watch Shaurya Aur Anokhi Ki Kahani only on Star Plus!

Shaadi Mubarak is the latest addition to the Hindi serials list of Star Plus. Within a few months, the serial grabbed the attention of the audience. What makes this TV show different is its storyline. It is all about a mother who struggles hard to make her own stand. At the age of 50, when women are told to focus on their adult kids and their families, Preeti went ahead and challenged his son that she will be a successful woman. In the bid to achieve her dreams, she finds a business partner with whom she starts a matrimonial business- Shaadi Mubarak.

To know what’s happening in this serial, you can also take a subscription to Disney+ Hotstar VIP or Premium.

The show is inspired by the Star Jalsha show- Kusum Dola. The soap opera revolves around Virat, who is an IPS officer. He marries Sai in order to protect her. On the other hand, the one he loved gets married to his brother. Trapped in the circumstances, these three are connected with each other in a certain way, finding the best possible way to lead a happy life.

Next in this Star Plus serial list with time is Imlie-story of a tribal girl! In the vague of time, Imlie is forced to marry Aditya. Though he refuses to marry her as he is already engaged to his girlfriend, he takes her responsibility and takes Imlie to his hometown. In no time, she gets adjusted to Aditya’s family.

What do you think? Will Aditya ever accept Imlie or ask her to leave his home? To get an answer to your question, do watch the serial.

Season 2 is based on the life of Gehna. She is raised in the Desai family after the death of her father. She is not treated well by most of the family members except the elder couple and Anant. He asks her to get married to a suitable match and lead a happy life. On the day of her wedding, the groom runs away, leaving Anant no option besides getting married to Gehna. Know more about the serial at 10:30 pm only on the Star Plus TV channel.

Yeh Rishta Kya Kehlata Hai is one of the longest-running shows on TV and amongst the first on the Star Plus Channel. The soap opera first premiered on January 12, 2009. The show initially revolved around Akshara and Naitik. However, after the leap, the show focuses on their daughter, Naira. It is one of the best Star Plus serials with the highest TRP in this list.

Mother of three adults, Anupama is a traditional Indian woman for whom her family is of utmost priority. However, she isn’t valued enough in her family and is treated as a meager housewife who knows nothing. While she tries her best to fulfill her responsibilities of being an ideal wife, mother, and daughter-in-law, her husband does not have any interest in her and finds a love partner. After knowing this, Anupama is devastated and pledges to be an independent woman to support her family.

Will Anupama be successful in what she has thought, and will her husband start valuing her? Find answers to all these questions at 11:30 pm only on Star Plus.

Gynecologist Preesha Srinivasan has been raising her nephew, Saaransh as the only parent after her sister’s death. On the other hand, Rudrakash, a famous rock star, has a connection with Saransh and plans to take all his rights from Pressha. To accomplish this, he marries Preesha and tortures her. However, as fate would decide, they both are yet to fall in love with each other. The show is a spin-off of a famous TV show Yeh Hai Mohabbatein that featured Karan Patel and Divyanka Tripathi in the leading roles.

Last but not least, we have Lockdown ki Love Story in our Star Plus serial List which was released in 2020. Set on the premises of Lockdown, the story of the show revolves around Dhruv and Sonam. Sonam is a modern girl, whereas Dhruv belongs to a traditional family with conservative thoughts. Both Sonam and Dhruv’s families disapprove of their union.

Dhruv’s mother plans to get him married to his childhood friend Milky. Due to circumstances, Dhruv marries Milky, and Sonam is left all alone. What do you think will Sonam ever get her love back or find new love?

Star Plus is one of the most-watched channels in India. The channel has broadcast a wide range of TV shows ranging from different genres. In this blog, we have curated the updated Star Plus serial list for 2021-2022. Do let us know which is your favorite TV program shown by the Star Plus channel? Also, stay tuned to our page to get the latest updates on the new serial on Star Plus.

1. Which serial is coming on Star Plus?

We have listed the names of serials above that one can watch on Star Plus. The list includes Shaurya Aur Anokhi Ki Kahani, Yeh Rishta Kya Kehlata Hai, Shadi Mubarak, and many more.

Read the table of the Star Plus schedule in the blog above.

4. Which serial has the highest TRP in Star Plus?

Yeh Rishta Kya Kehlata Hai is one of the famous Star Plus TV shows. It comes at 7:00 pm from Monday to Sunday.

8. What are the upcoming serials on Star Plus?

The Star Plus’ upcoming serial names are Nach Baliye and Faltu.

9. Which program is no.1 on the Star Plus all serial list?

In all of the Star Plus TV shows 2022 list, Anupamaa is in one of the top positions.

Rajjo is telecasted at 7 PM on the Star Plus channel.