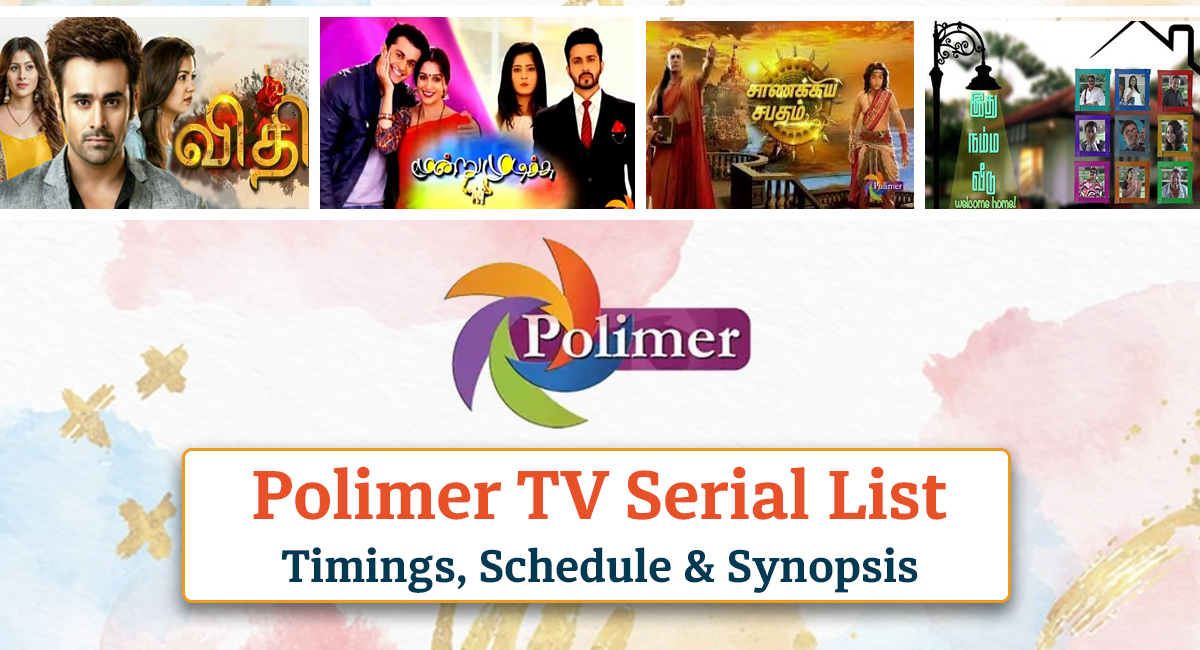 Polimer TV, also known as Polimer, it is the first Tamil channel. Later it went for revamping and was introduced as an entertainment channel. The channel has been associated with many other best Hindi entertainment channels like Colors, &TV, etc. Besides telecasting original TV serials, the channel also telecasts a dubbed version of many Hindi serials. Here we have provided a Polimer TV serial list, timings, and synopsis.

First, in our list of Polimer TV serials is one of the famous Tamil Romantic Drama- Vidhi. Thavan Suppaiya and Marudhu Shankar write the show. The story of the TV series revolves around the baby’s adoption and how the life of the family changes after the adoption. Nila and Raghu are happily married but cannot have their baby, so they decide to adopt. After the adoption, the baby’s birth father is married to Raghu’s sister, and when the truth comes between all the members, tensions between the families start growing. To what happens next, do watch the serial today.

Thirumalai Deivam is a mythological movie that is frequently premiered on Polimer TV. This devotional movie is based on Lord Srinivasan, an incarnation of Lord Vishnu. He finds several difficulties in his path. During his journey, he is also mocked by saint Brughu and later faces humiliation from his kingdom.

Next on Polimer TV serial list is a comedy show-Comedy Express. In this reality show, famous celebrities from the Marathi entertainment industry are invited. The stars have to tickle the audience’s funny bones through their comic timings and humorous dialogues. It is one of the highly watched Tamil TV shows. The show premiered on PolimerTV in the evening.

The story of this Polimer channel serial revolves around the trials and tribulations faced by Sundaram. The story of the series is quite gripping as it has lost of turns and twists. The audience will get to know about the new dynamics of the life of each family member. It has all the elements, including love, betrayal, and secrets.

Sri Rama Baktha Hanuman is a devotional Polimer TV Tamil serial based on the life of the Lord Hanuman, who worshiped Lord Rama- the incarnation of Lord Vishnu. The TV serial narrates his love for Lord Rama and how he supported Rama in his every endeavor. To know more deeds about this show, stay tuned to the Polimer TV channel.

The Tamil polimer serial is divided into three significant chapters that include-the early life of Vishnugupta and his kingdom and sceneries that led to his exile. Another part is based on Alexender’s invasion in India, his death, and the rebellion led under the leader shop of popular Chandragupta Maurya. The third part of the TV serial was based on the defeat of Greek invaders and the crowning of Chandragupta as Magadha’s new king.

Ithu Namma Veedu is one of the top-rated Polimer TV serials. The comedy-drama is based on the life of the famous business Tycoon Ajith, who runs an old age home that provides comfort and luxury to senior citizens. That’s not it; the TV serial also has a love triangle where Gayathri loves Ajith, and one of Ajit cousin-Avinash loves Gayathri. How their lives unfold and who finally pairs with Gayathri-that would be interesting to know.

The Indian soap opera originally appeared on Colors TV. It revolves around two sisters who are married in the same family. The two of them have been a great support for each other. The show later takes a leap where new family members are introduced. It was among the longest-running show on one of the leading Hindi entertainment channels-Colors.

Moondru Mudichu is a dubbed version of one of the best Hindi TV serials- Sasural Simar ka. It is one of the top-rated names in the Polimer TV Tamil dubbed serial list.

Engal Sai serial in Polimer TV is one of the most well-performed shows in the Tamil devotion serial list 2022. As per the plot of this Polimer TV serial, Sai Baba tries to help everyone in Shirdi village. He had rectified the mistakes of numerous voracious people who didn’t like him and his teachings.

Introduced in 2009, Polimer TV is an Indian channel headquartered in Chennai, Tamil Nadu. It was formerly a local channel. However, it was converted into an entertainment network and was expanded in Tamil Nadu. The channel is known for many TV serials like Moondru Mudichu and many more that have been placed on the Polimer TV serial list. Most of its series are Dubbed versions of Hindi serials. You can also look at Zee Bangla Serial List 2022.

2. Which show is popular in the Polimer old serial list?

4. When can I watch the full episode of Engal Sai serial on Polimer TV?

5. What are some hindi dubbed serial in Polimer TV?

The popular Aladdin serial on Polimer TV started in 2018.