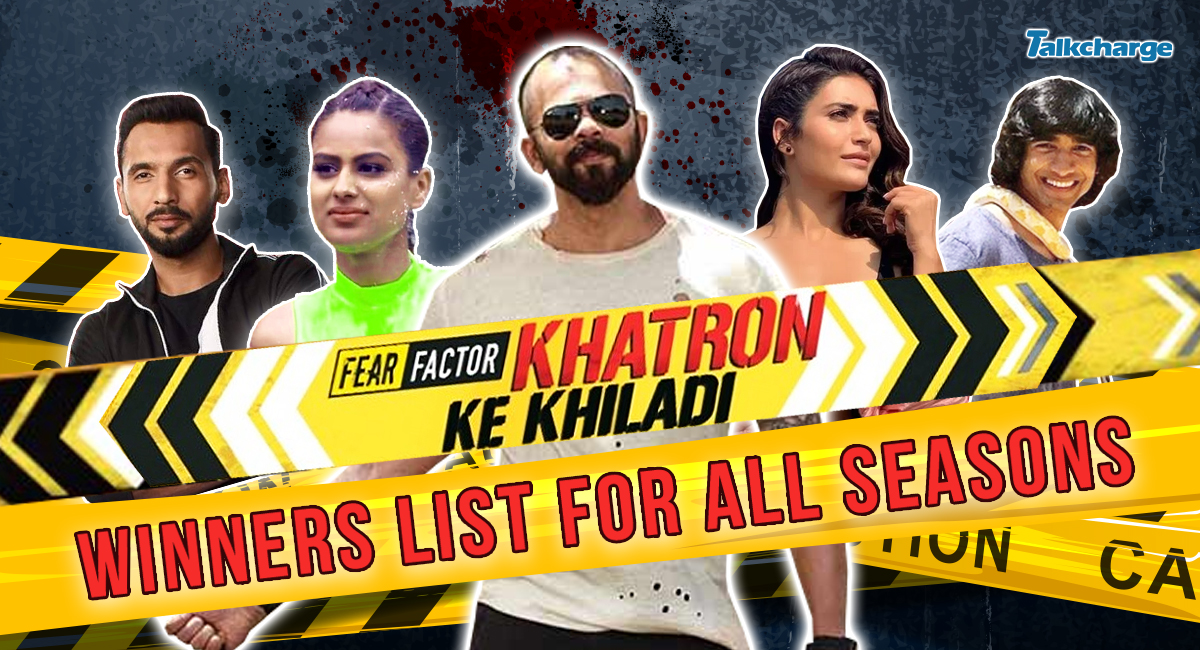 Therefore, you can read about Khatro Ke Khiladi all season winner. We must admit that it is not easy to perform stunts and tasks against brave contestants and yet win the entire season. So let’s acknowledge the participants you turned out to be victorious.

The first season of Khtaron Ke Khiladi was the new beginning of a massively hit reality show. Akshay Kumar hosted the season with lots of energy and excitement. The season had 12 daredevil contestants who were courageous to participate in deadly tasks.

A woman named Anushka Manchanda again won the second season of Khatron Ke Khiladi. She is supremely talented with a beautiful voice, personality, and fashion skills. Anushka was part of the well-known music band, Viva.

She was declared the winner of Khatron Ke Khiladi 2 after crossing every hurdle of dangerous activities and tasks. After here, she also contested in Jhalak Dikhla Jaa (2011) to try her luck in dancing. However, she could not win that show. Presently she runs a fashion label in Srinagar for youth. This season, Khatron Ke Khiladi became the best show on the colors serials list.

Priyanka Chopra hosted season 3 of the show as Akshay Kumar was tight on his movie shooting schedules. This is a fresh look at the show with a female host, yet it could not raise the TRP. However, the tasks and brave participation of the contestants made the audience follow the season.

In this season, Shabir Ahluwalia was the Khatron Ke Khiladi season 3 winner. He is a known actor and model cast for the lead role in the Zee TV serial, Kumkum Bhagya, after this victory. Later we saw that the winner of KKK 3 worked in movies like Mission Istaanbul and Shootout at Lokhandwala.

Next name on the Khatro Ke Khiladi winners list is Aarti Chhabria. Akshay Kumar again hosted the season of this thrilling show in 2011. This time the task was more deadly, set in the beautiful locations of South Africa. There were 13 contestants for the show, and by the end of the finale, Aarti Chhabria was declared the winner of Khatron ke Khiladi season 4.

Aarti is a model and actress who first appeared in the movie Lajja. Further, she participated in Jhallak Dikhla Jaa season 6. Post her victory, she was signed for movies like Vyah 70 km, Daddy Cool and Milenge Milenge. Presently she is married to a chartered accountant and active on Instagram.

Season 5 introduced Rohit Shetty as the host of the show, who is a well-known director and producer in Bollywood. He has also produced many Bollywood comedy movies you can’t miss to watch. With the tagline “Dar ka blockbuster”, he brought fresh energy and exciting tasks that thrilled the contestants of KKK 5.

After performing dangerous wild tasks, Rajneesh Duggal made fresh addition to the Khatron ke Khiladi Winners List. This supermodel narrowly beat the runner-up Gurmeet Choudhary in the last round. He has worked in significant movies, including Laal Rang, Phhir, Saansein, Udanchhoo, etc. She last appeared in the serial Shrimad Bhagwat Mahapuran as Krishna and music video of ‘Bombay Vikings – Chhod Do Aanchal Zamaana Kya Kahega .’

The 6th season of Khatron Ke Khiladi was hosted by the action movie director Rohit Shetty. It was an interesting season with several deadly tasks and activities in South Africa. Aashish Chaudhary was announced to be the winner of Khatron Ke Khiladi after closely beating Meiyang Chang, the contestant of Indian Idol 3.

Aashish is a model, actor, and host who was appreciated for his comic work in Double Dhamaal. The KKK 6 winner was also in the lead role in a Zee serial named EK Mutthi Aasmaan. This serial gave him popularity, which led him to the opportunity to participate in this stunt show. After he won the season, he was signed for another TV serial named ‘Dev’, which was loved by the audience.

For a change, the season was hosted by Bollywood actor Arjun Kapoor. There were 15 contestants for this season of Fear Factor India. The stunt tasks were well designed and executed by the courageous participants. This season saw the Balika Vadhu actor Sidharth Shukla adding his name to Khatron Ke Khiladi Winners List.

This Khatron Ke Khiladi season 7 winner has won Bigg Boss 13 and participated in Jhalak Dikhla Jaa. You can also look for the Bigg boss winner list to see more about the winners. He appeared in the romantic movie Humpty Sharma Ki Dulhania (2016).

The eighth season of KKK season 8 was hosted by Rohit Shetty. It was wisely designed with deadly tasks and activities. In the season, Shantanu Maheshwari was announced as the Khatron Ke Khiladi season 8 winner. He started his career as a dancer in Boggie Woogie and appeared in Bigg Boss 10, Box Cricket League, and more.

You can watch the season on the colors channel or on Free Live TV Apps available in India. Enjoy the season and watch the clip of deadly activities by participation. The runner-up, Hina Khan, was an excellent performer and gave cut-to-cut competition to KKK season 8 winner Shantanu Maheshwari.

With the tagline of “Jigar Pe Trigger”, Khatron Ke Khiladi season 9 was a hit segment of this reality show. Punit Pathak was another name added to the Khatron Ke Khiladi winners list. He is known as a dancer and actor. He has won Dance India Dance’s season and never looked back. Presently he is the judge of the same show.

He has also tried his luck in dancing by participating in Jhalak Dikhla Jaa. He also acted in the dance-based movie ‘Any Body Can Dance (ABCD),’ and he continued to act as well. So you can see this kkk9 winner in Hindi Entertainment Channels, either dancing, hosting, or acting.

The most hyped season of Fear Factor: Khatron ke Khiladi came with the tagline of “Darr Lega Class Aur Dega Trass”. After a series of daring 22 episodes, we finally got the season’s winner.

The stunning Karishma Tanna bravely faced all the tasks assigned and made it to the winner’s list of the Khatron Ke Khiladi season. She was the final one who lifted the winner’s trophy with a car key and Rs 20 lakh prize money. If you like the daring stunt reality show, you can also go through the MTV Roadies winners list and see the courageous personalities.

The latest season of this thrilling show was set in India, hence the name ‘Made in India’. This season featured the participants of previous KKK seasons in a limited edition. This was unique in its format and tasks. After taking up difficult tasks, Nia Sharma was declared the winner of Khatron Ke Khiladi 2020.

This TV actress declared her victory on social media, saying, “Khatron Ke Khiladi – Made In India jeet Gayi…”. This has added another woman on the KKK Winners List. Nia is a well-known face of television serials, appreciated for her work in the Star serial named “Ek Hazaro me Meri Behna Hai”. She is from Delhi and holds a degree in Mass Communication.

After daredevil, thrilling and spine-tingling performances of 13 contestants, season 11 of KKK ended on 26th Sep 2021. Arjun Bijlani was declared the winner of this exciting season. Arjun was one of the strongest contenders in the stunt-based reality show. Besides giving the best performances, the actor entertained the audience with his comedy punches.

In the finale, he gave a tough competition to Divyanka Tripathi and aced his stunt to win the 11th season of Khatron Ke Khiladi. The Miley Jab Hum Tum fame actor took home a coveted trophy with the prize money of Rs 20 lakh and a brand new car.

Tushar Kalia, an Indian choreographer won KKK season 13 by beating Fasal Shaikh. Other than Khatro Ke Khiladi, Kalia has also seen in popular shows like Jhalak Dikhhla Jaa 6, Jhalak Dikhhla Jaa 7, and Dance Deewane. He got his debut in the film industry as a choreographer in the movie Ae Dil Hai Mushkil. Kalia has also choreographed in several movies such as The Zoya Factor, Ok Jaanu, Half Girlfriend, Hate Story 4, and Dhadak.

If you are curious to know about Khatron Ke Khiladi Winners List, then surely you enjoy watching a daring reality show. It is among the most engaging reality shows in India, and airs on Colors Channel. This blog will inform you of the name of the winners, runner-up, host or taskmaster, year, and location. Also, we have mentioned the Khatron Ke Khiladi all-season tagline. We hope this blog is informative for you. Let us know who your favorite winner of all KKK seasons is and wait patiently for KKK season 12 next year.

1. Who is the winner of Khatron Ke Khiladi Season 7?

Sidharth Shukla is the winner of Khatron Ke Khiladi Season 7, 2016.

2. How many seasons are there in Khatron Ke Khiladi?

Altogether, there are 11 seasons of Khatron Ke Khiladi. We have mentioned the winners of all eleven seasons in this blog.

Khatron Ke Khiladi is not based on public voting, so there is no solid intent to manipulate the audience. Recently Bharti Singh revealed that the contestants performing the stunts and reptiles are real. Of course, there is a stunt expert to supervise. However, some still believe that it is a scripted reality show.

4. Why did Khatron Ke Khiladi stop?

After the 10th season, the show was stopped because of COVID-19. But it was soon resumed from August 2020 onwards.

5. How much are Khatron Ke Khiladi contestants paid?

The participants of Khatron Ke Khiladi are paid per episode. The range may vary from₹ 2 Lakh to over ₹ 4 Lakh. But this may vary every season as per their contract.

6. Who are the participants of Khatron Ke Khiladi Season 10?

The winner of the 10th season was Karishma Tanna, and the runner-up was Karan Patel. Apart from these two, Dharmesh Yelande and Balraj, Shivin Narang, Tejasswi Prakash, Adaa Khan, RJ Malishka, and Rani Chatterjee and Amruta Khanvilkar participated in the season.

7. Who are the participants of Khatron Ke Khiladi Made in India Season 11?

The KKK season 11 was a limited edition with the ex-contestants of the show. This season, Nia Sharma was declared the winner, followed by Karan Wahi, the runner. Apart from these two, Jasmin Bhasin, Bharti Singh, Aly Goni, Haarsh Limbachiyaa, Jay Bhanushali, Karan Patel, and Rithvik Dhanjani contested in the season.

The winner of KKK 13 is still not announced. You can check out the latest updates regarding the winner of Khatro Ke Khiladi season 13.

10. What was KKK all-season location?

The location for Khatro Ke Khiladi seasons has been numerous such as South Africa, Brazil, Argentina, Spain, and Bulgaria.

11. Who is the winner of Khatron Ke Khiladi season 15?

The 15th season of Khatron Ke Khiladi has not taken place. You can know about KKK 15 winner in the upcoming year.

12. Who is the KKK last season winner?

13. Who was the Khatron Ke Khiladi season 2 winner?

The winner of Khatron Ke Khiladi season 2 was Anushka Manchanda.