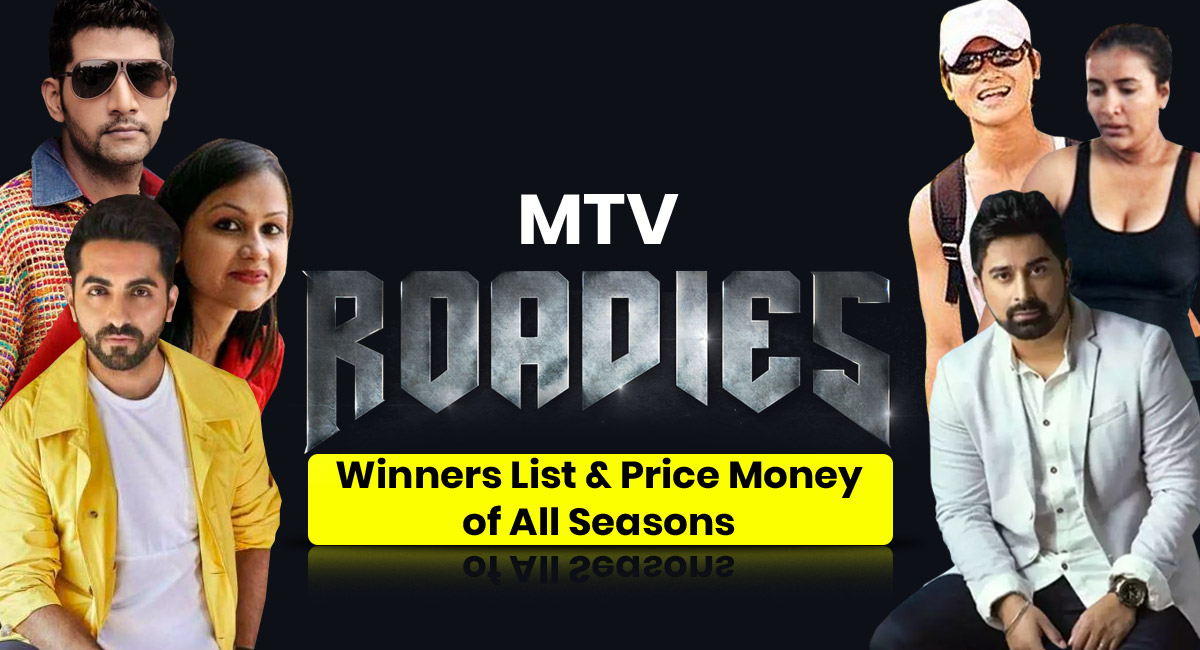 MTV Roadies is one of the best youth-based reality shows that has been airing since 2003. The participants travel to various locations to face the challenges designed to test their physical and mental strength. One who finishes the tasks and stays till the end, making their name to the Roadies winners list.

One who successfully completes the tasks is declared the winner. Here we have provided Roadies all season winner with details. So keep reading to know more about the Roadies prize money, winners, host, and more.

List of Roadies Journey Fest Winners for All Seasons

The latest season of MTV Roadies is season 19 with the title ‘Roadies: Journey in South Africa’. The show was produced by Pippip Media Private Limited and aired on MTV on 8 April 2022. This time the contestants presented their talent and knack for general knowledge. Unlike the old seasons, season 19 showed the competition between Ex-Roadies and New Roadies in Buddy Pairs. The show was exclusively streamed on Voot. For all Roadies seasons till now, it was the first time when there were two winners. Ashish Bhatia and Nandini G have got their names on Roadies winner list 2022. Winner Nandini G is a 25-year-old dance fitness instructor and footballer who hails from Bengaluru, whereas the other winner Ashish Bhatia has his hometown in Dehradun.

A Delhi boy named Hamid Barkzi was declared Roadies season 18 winner. Hamid holds Afghan nationality, but his family is settled in Delhi. He is passionate about modeling and dancing and was part of Nikhil’s Team ‘Loyalty’ in this season. He is also an Instagram influencer for fitness freaks; along with that, he also loves to travel and listen to music.

This Roadies Revolution season was different from any other season before. The auditions were organized through social media. There were no gangs or gang leaders, and the show was shot in a different location in India. The challenging last task was the deciding one for the season, where he beat Michael Ajay to become victorious.

Prize – Jawa bike and ₹3 lakh for a cause

The seventeenth season of Roadies was aired on MTV and Voot. It was an exciting season with 20 captivating tasks for the participants. The task location was confined to India, namely, Munnar, Alleppey, Wayanad, Madikeri, and Chikkamangluru. All the tasks lead us to the Roadies winner 2019.

This season has prominent gang leaders, Prince Narula, Nikhil Chinapa, Neha Dhupia, Raftaar, and Sandeep Singh. And the winning gang leader was Raftaar. In the grand finale, the Kashmiri boy Arun Sharma was declared MTV Roadies Real Heroes winner. This winner of Roadies 2019 is a multi-tasker who enjoys singing, playing the guitar, and dancing.

Roadies Xtreme was the season of extreme tasks and challenges. The locations for Roadies tasks were set across North-East India. Rannvijay Singh was the host for the season.

Roadies Xtreme winner is Kashish Thakur, who had to face difficult challenges in 27 episodes before making his name on the Roadies winners list. The gang leader of this Roadies season 16 winner was no other than Neha Dhupia.

The most exciting and captivating episodes of the show were Roadies Rising. There were four gangs with prominent leaders Neha Dhupia, Rannvijay Singh, Karan Kundra/ Nikhil Chinappa, and Prince Narula. Harbajan Singh also played a crucial part in the show.

After a series of challenging tasks and cut-throat competition, Shweta Mehta was declared Roadies Rising winner. The winner of Roadies X5 is an actress and fitness model. She is a sensation on social media as well.

With the title of ‘Your Gang, Your Glory, the Roadies 14 started to air from April onwards. The creators of the season set the location in India and Bhutan. In the midst of beautiful locations, the participants had to compete with each other in challenging physical and mental tasks.

Facing all the challenges, Balraj Singh became the Roadies season 14 winner. The task locations were set up in India and Bhutan. The winner of roadies 2016 also won Renault Duster. This was the first season where prize money was changed to a car worth ₹10 lac.

Season twelve of Roadies started to air in January. MTV Roadies 12 is significant in multiple ways. Roadies 12 winner was Prince Narula, who was a rising star in the industry. After winning Roadies X2, Prince was also crowned as Bigg Boss winner and Nach Baliye winner.

The season was set in desirable locations in India and Nepal. Bani Judge presented the show, and the winning gang leader was Rannvijay Singh.

Note: After season 12, the creators of Roadies skipped season 13 and directly aired season 14.

Season 11 of Roadies was aired on MTV India. The task locations were confined to the western states of India. It was undoubtedly an exciting season with fun, fight, and challenges.

In the grand finale of Roadies X1, Nikhil Sachdeva made his name to the Roadies winners list. The show was hosted by Rannvijay Singh, who pumped energy into the show.

Palak Johal comfortably marked her name on the Roadies winners list. In the do-or-die tasks, the contestants showed great courage in taking risks and challenges. She was the most entertaining contestant and was fun to watch.

The famous Rannvijay Singh hosted the season with 12 episodes. Palak is the third woman to be the MTV Roadies all-season winner.

Rannvijay Singh also hosted the ninth season. The judges of the show were Raghu Ram and Rajiv Laxman. The location of the show was India and the US.

The participants participated in money, immunity, and advantage tasks. Finally, Vikas Khoker marked his name on the Roadies winner list.

Aanchal Khurana was the second lady to win a season of Roadies. In all the tasks, she displayed great courage and passion. The show was interesting, with plenty of tasks and challenges. The location of show was set in India and Brazil.

The seventh season of Roadies came up with the interesting title ‘7 Deadly Sins & 1 Wild Safari ‘. There were deadly tasks to justify the title that demanded the participant’s courage.

The destinations were located in India, Kenya, and Egypt. Among all the participants, the name of Anwar Syed found its way to the Roadies winners lists in 2010.

The sixth season of Roadies began with 20 contestants. It started to air from November onwards. The tasks for the season were set up in beautiful locations in India and Australia.

It was interesting to watch the season full of challenging tasks. Nauman Sait made it to the Roadies winner list in 2009.

The new season of Roadies 5.0 came with a new format and series of taglines. There were 13 contestants in the season that competed with each other in challenging tasks. Raghu Ram was the creator of this very successful format.

The season was planned to occur in India, Thailand, and Malaysia. MTV Roadies winners get high visibility in the industry and participate in other reality shows. Ashutosh Kaushik participated in Bigg Boss and won the season as well.

The fourth season of Roadies was another great season. It brought new talents across the country. It was aired from November onwards.

There were adventurous and exciting tasks to take the show to a greater level. By the end of the season, Anthony Yeh was the new name added to the Roadies winners list. Gurbani Judge was the runner-up and an important figure of the season.

The third season of Roadies was another fun-filled and adventurous season. It was the first few seasons that engaged the young audience.

It began with 17 contestants, and after rounds of elimination, we were left with Roadies winner for season three, Parul Shahi. She was the first woman to win the crown.

The Roadies season 2 winner was Ayushman Khurana. He made a significant mark in season 2 of Roadies and won the title. He impressed the audience with his courage and strengths.

Among Roadies all-season winners, Khurana is the most successful participant. He is an amazing actor, singer, and host. Therefore, when we talk about Ayushman, we cannot miss talking about his humble journey from Roadies season 2.

The brand new reality show came into existence for youth. This show introduced us to adventure, thrilling tasks, and fun. The youth loved the season so much that it was continuing in 2022.

Roadies first winner was Rannvijay Singh, who is known for his boldness and straightforwardness. After winning the season, he continued to be part of Roadies as host. It is interesting to know that now he is a prominent creator and presenter of the show.

Roadies are not just an MTV show, but the country’s youth found interesting reality shows to relate to. There is more than one reason to follow the show till the upcoming season. With every season, the Roadies winners list adds up with another talented personality.

Here we have mentioned Roadies winners list who won the title. We have also mentioned the prize they received, the host, and the runner-up along with this. You will get all you wish to know if you are a Roadies fan.

Rannvijay Singh won the title of Roadies 1 winner in 2003. He is a prominent Roadies figure now.

Parul Shahi won season 3 of roadies. She was the first woman to win the season.

3. Which Roadies season was the best?

Roadies X2 is considered to be one of the best seasons so far. Prince Narula won it in 2015.

4. What is the age limit for roadies?

You must be a minimum of 18 years of age and hold valid Indian citizenship proof to be an audition for Roadies.

5. Who is the owner of roadies?

Raghu Ram is the owner and creator of Roadies. He keeps updating the show format so that young people still love it.

6. Is the Roadies show scripted?

It is generally said that all reality shows are scripted, and so is Roadies.

7. Who is the winner of roadies rising?

Shweta Mehta was the clear winner of the Roadies Rising season 15.

Aanchal Khurana won Roadies season 8. She is among a few females to with any season.

9. What was Roadies Revolution winner prize?

Roadies season 18 winner is declared as Hamid Barkzi the winner. He received Jawa Bike and ₹3 lakh cash for Nikhil’s cause.

11. What does Roadies winner get?

The Roadies prize money ranges from one season to another. The latest winner who won the Roadies journey in South Africa 2022 received a cash amount of Rs.10,00,000.

Hamid Barkzi is the Roadies 17 winner.

14. What are the awards won by MTV roadies?

MTV Roadies X1 –  Ride for Respect got the title of ‘Best Youth Show – Non Fiction’ by the Indian Telly Award.

Shradha is Gurgaon based author who has an eye for the need of the readers. Her wide range of writing experience has polished her skills to produce well designed content. Her maturity and understanding of the subject is reflected in her writing. She is enthusiastic about baking, reading and gardening.

Shradha is Gurgaon based author who has an eye for the need of the readers. Her wide range of writing experience has polished her skills to produce well designed content. Her maturity and understanding of the subject is reflected in her writing. She is enthusiastic about baking, reading and gardening.