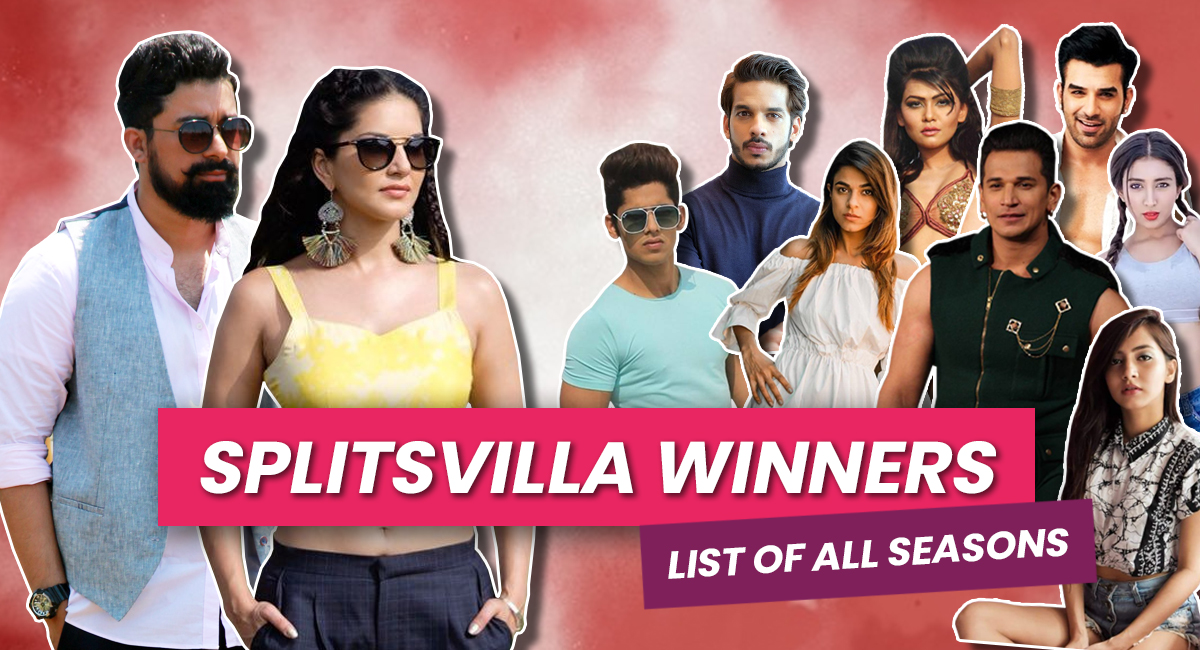 The youth-based show of MTV Splitsvilla is one of the longest-running reality shows of MTV channel. It was first aired in 2008 and since then, it has become a storehouse of entertainment for youth. Primarily, it is a dating reality show where gorgeous girls and dashing boys come together for a common journey of love, friendship, and fights.

The format of the show has been almost the same for last 12 seasons with different innovative tasks to help the contestants to pick their partners or dump them. This show gives the winners in pairs. The boy who wins is called ‘King‘ or the girl who wins is titled as ‘Queen‘.

Here, we have given Splitsvilla winners list which includes the winners of all 12 seasons. Along with this, you will get the details of the show including, the host, location, and other details.

Here is the MTV Splitsvilla all season winner and runner up list including the information of year, location.

The most awaited youth-based show Splitsvilla Season 1 was aired in 2008 on MTV. The season was hosted by Rannvijay Singh. This reality show format has two winners, one among girls and the other among the boys. With the tagline of ‘World War 3 of love’, the story of love, fight and competition began with the show.

This season had 17 episodes with 22 tough contestants. Vishal Karwal and Shraddha Haribhai were the first who made their names to the Splitsvilla winner list. We do not have much information about Shraddha, but Vishal became an actor in TV serials. He has also played lead roles in prominent serials.

The winners of MTV Splitsvilla season 2 are Siddharth Bhardwaj and Sakshi Pradhan. The Splitsvilla 2 winners bagged prize money of ₹ 5 lac. This season of the show was hosted by well-known DJ Nikhil Chinapa. There were 17 episodes of this season and 20 contestants. Siddharth was a successful model, and VJ was last seen in Big Boss season 5, whereas Sakshi tried her luck to be counted in the Big Boss winner list in its 5th season.

Nikhil Chinapa and Deepti Gujral hosted MTV Splitsvilla season 3. It was an interesting season where beautiful young people entered the show and played the set format—the location of the season was in Thailand. There were 20 members in the season, which went on to air for 13 episodes. Splitsvilla 3 winner were Parag Chadha and Riya Bamniyal.

The fourth season of the youth-loved show MTV Splitsvilla season 4 was another great edition of Splitsvilla in 2011. Dushyant Yadav and Priya Shinde made it into Splitsvilla winner list. The set for this season was located in Dubai. Both winners were seen in TV serials and shows after winning the title.

Splitsvilla winners list includes the prominent names of Paras Chhabra and Akansha Popli. This success opened up a new opportunity for the winners. Paras become the national crush in no time, and presently he works as an actor and model. Along with that, Akanksha pursued to become an influential DJ.

In Splitsvilla season 6, Paramvir Singh and Mandy Debbarma made it to the Splitsvilla 6 winner list. The title of King was given to Paramvir Singh. However, he continued as a professional model as his luck didn’t work as an actor in TV serials.

Meanwhile, Mandy was titled queen of the season and continued with her passion for modeling. The season was aired in 2013, which glued the young audience to it.

The season was rightly tagged as ‘Hot as hell,’ and the contestant never missed a chance to flaunt their beauty.

In Spiltsvilla season 7, Mayank Gandhi and Scarlett Rose added their name to the Splitsvilla winner list. The interesting show was hosted by Ranvijay Singh and Sunny Leone in Jaipur. The show was released in 2014 with 30 contestants. Each episode was more interesting than the other.

These Splitsvilla 7 winners are going well after the success. Mayank was last seen in the well-known Star Plus TV serial Veera. And Scarlett is now a model and Instagram influencer in the travel and lifestyle category.

The ultimate King and queen winners of Splitsvilla 8 are Prince Narula and Anuki Tchokhonelidze. The show was released in 2015. Prince is known as the King of the reality shows and has bagged the winner title in various shows. He has also made it to the MTV Roadies winner list. He is now happily married and continues his career of acting and modeling.

Meanwhile, Anuki mainstreamed into the modeling industry after the success and continues to do that till now. The season was shot in the beautiful scenery of Goa. It was themed as ‘what women Love’ as the queen was given the majority right.

Season 9 of MTV Splitsvilla started with the tagline ‘Where women rule.’ There were 21 episodes with 26 contestants in the show. And this season of Splitsvilla winners was Gurmeet Singh Rehal and Kavya Khurana. Kavya was titled ultimate queen master bold queen. She is a successful model and DJ presently.

On the other hand, Gurmeet has taken part in other reality shows; he was seen in Fear Factor Khatron Ke Khiladi season 2. The person who wins the show is titled as ultimate King and queen of the show.

The tagline of Splitsvilla X is ‘Catch your match’. Here again, 21 beautiful contestants came together for the eventful season. The show was presented by Rannvijay Singh and Sunny Leone with great zeal and style.

This season was shot in the beautiful and adventurous locations of Jim Corbett National Park. There were 22 episodes of love, friendship, fights, and games. After overcoming all the challenges, Baseer Ali and Naina Singh made it to the Splitsvilla winners list in 2017. The winner of Splitsvilla 10 got a lot of popularity after the show.

MTV Spliltsvilla 11 winners list has added the name of Shruti Sinha and Gaurav Alugh. There were 22 contestants, and the show was stretched to 27 episodes, the highest among all seasons of Splitvillas. The Jim Corbett was the location the last season. These two were the best friends in the season, and they defeated all to win the trophy.

The latest season is named MTV Splitsvilla X2, which was shot in Jaipur. The season was full of adventure and new game formats with controversies, confusion, love, and friendship. Twenty-six glamorous contestants made the mark in the show. Finally, Shrey Mittal and Priyamvada Kant were added to the Splitsvilla winners list.

The show’s tagline was ‘Your Best Shot at Love,’ The season’s concept went well with the tagline, and everyone gave their best shot to find love. This edition was again hosted by dashing and energetic Rannvijay Singh and glamorous Sunny Leone.

The audition for the 13th season of Splitsvilla started in December 2020. The show was yet again hosted by super gorgeous Sunny Leone and VJ. Rannvijay. The Indian television dating reality show premiered on 6 March 2021 and initially had 9 boys and 12 girls who came to play the game of love. Later 6 more faces were introduced in the reality show. With taglines “One for Love, One for Chance” & “Let Cupid works his magic,” MTV Splitvilla 13 ruled the hearts of its audience. After giving stiff competition to others, Jay Dudhane and Aditi Rajput were declared the winner of MTV Splitsvilla X3. The couple defeated Shivam Sharma and Pallak Yadav and took home the title. Jay Dudhane is currently one of the participants of Bigg Boss Marathi 3.

Aditi Rajput participated in the 2018 edition as well. She then made her digital debut with web series like- Love Ok Please and Code Red.

MTV Splitsvilla Season 14: Who will be the Winner?

Just like every year, Splitsvilla season 14 has started and its premiere took place on 12 November, 2022. The hosts of the show are Sunny Leone and Arjun Bijlani. Along with them, the Villa insiders are Anushka Mitra and Abhimanyu Raghav. This time, there are two islands namely Isle of Venus and Isle of Mars for girls and boys respectively.

After many fights, jealousy, hatred, friendship, backstabbing, and love, finally, one couple among all contestants wins the Splitsvilla title of Ultimate King and Queen every new season. Splitsvilla is one of the most popular youth shows on MTV India every year; youth stick on their television to watch this show. The show has immense popularity also because gorgeous Sunny Leone and dashing Rannvijay Singh are presenters and hosts of the show. This show has completed its 13 seasons successfully with great TRP. Splitsvilla is known as the youth show in our country. In this blog, we have given detailed information on the Splitsvilla winners list and other related information.

Paras Chhabra and Akanksha Popli, Mayank Gandhi and Scarlett Rose, Prince Narula and Anuki Tchokhonelidze, Gurmeet Rehal and Kavya Khurana, Basir Ali and Naina Singh, Shrey Mittal and Priyamvada Kant. To know more about the winners of Splitsvilla, go through the blog above.

2. Who is the winner of Splitsvilla 1?

Vishal Karwal and Shraddha Haribhai were the Splitsvilla season 1 winner.

3. Who is the winner of Splitsvilla 8?

Prince Narula and Anuki Tchokhonelidze were Ultimate King and Queen of Splitsvilla Season 8.

4. Who is the winner of MTV Splitsvilla 5?

Splitsvilla is a show where the personality of the contestants is surfaced. So the storyline might be scripted, but the reaction and game plans seem real. However, the presenters remarked that the show was not scripted but rigged.

8. Who are Splitsvilla 11 winner and runner up?

Shruti Sinha and Gaurav Alugh were the winners of Splisvilla season 10, whereas Samyuktha Hegde and Shagun Pandey were the first runner-ups.

9. Who was Splitsvilla 10 winners?

10. How many seasons of Splitsvilla are there?

There are total of 13 seasons of Splitsvilla, and the upcoming season is going to get aired on MTV in 2022.