Best Martial Artists in the World (2022): From Jackie Chan to Vidyut Jammwal

All Posts / World / Best Martial Artists in the World (2022): From Jackie Chan to Vidyut Jammwal 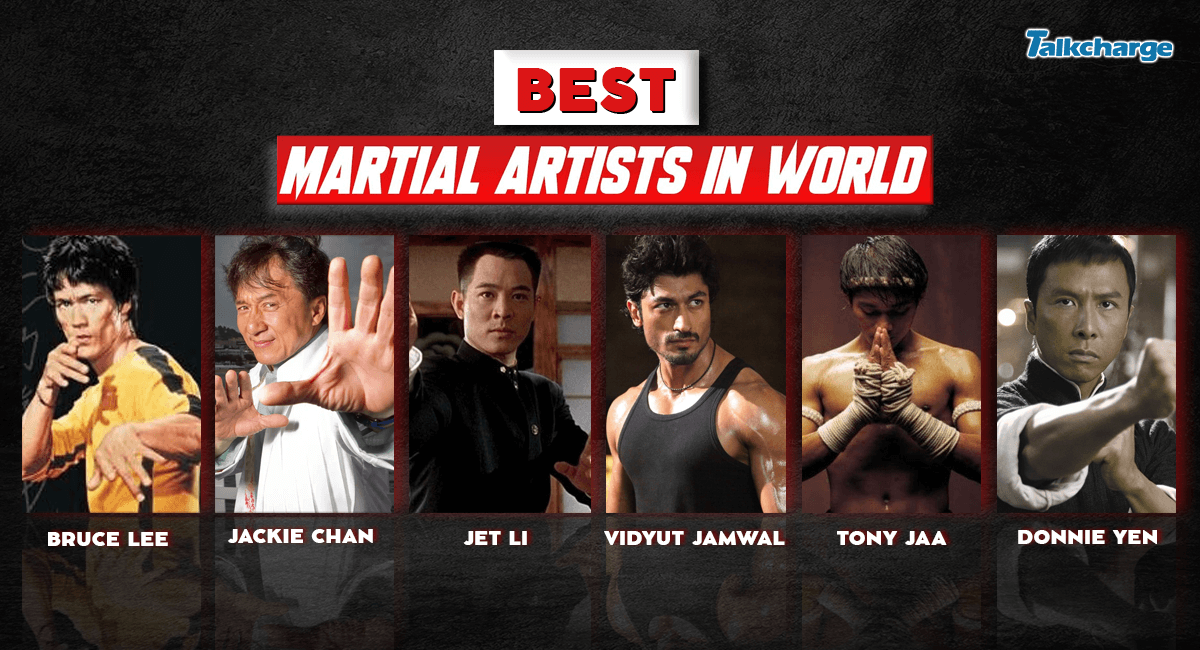 With the widespread of Martial arts across the globe, the ancient discipline is becoming popular in many cultures. One of the main reasons why Martial arts is so popular is the fact that it can benefit a person in a number of ways. It makes one active, helps to gain self-defense, and makes you disciplined.  Some of the popular forms of Martial arts are Judo, Karate, Kung Fu, Taekwondo, Muay Thai, Wushu, and Mixed Martial arts. The credit for the humongous popularity of martial arts also goes to the movie Industry. It has given us the greatest martial artists who have taken the art to another level and the popular imagination. Leading film actors like Bruce Lee, Jackie Chan, and Jet Li are to name a few artists who have seamlessly showcased the art even at the cost of their health. A recent addition to the list of best martial artists in the world is Bollywood Actor Vidyut Jammwal. The actor is making the country proud, and now we are hopeful that the Indian form of martial arts will soon get prominence across the globe.

The ace actor and one of the most famous cinematic personalities across the globe, Jackie Chan deserves the first spot in the list of the world’s top 10 martial artists 2022. He is majorly known for his slapstick acrobatic fighting style and innovative stunts that are choreographed to almost perfect precision and often delivered in a humorous style. He is perhaps one of the few actors who do all his precarious stunts on his own without using a body double, often at the expense of his well-being. He followed in the footsteps of the legendary Bruce Lee and was the one who brought Asian Martial arts into mainstream Hollywood cinema.

He started his acting career in the year 1960 and has completed more than 150 films. Some of his movies in which he has given the most complex scenes and choreography are Drunken Master, Police Story, Dragons Forever, The Legend of Drunken Master, Wheels on Meals, Armour of God, Rumble in the Bronx, New Police Story, Who am I, Rush Hour & Snake In The Eagles Shadow. Besides his stunts, the actor is a well-known philanthropist and a comedy actor.

Next in our list of top 10 martial artists in the world is the veteran actor and film producer- Li Lianjie, aka Jet Li. He has received training from Wu Bin-the acclaimed Wushu teacher. Jet Li then went on to star in the making critically acclaimed Martial arts movies that include Zhang Yimou’s Hero, Fist of Legend, and Once Upon a Time in China series. Besides Chinese film cinema, the actor has made his name in French Cinema with movies such as Kiss of the Dragon, Unleashed, The One, and War. He is best remembered for a kickboxing-influenced style that boasts power speed and control.

The handsome hunk and a famous Bollywood actor, Vidyut Jammwal, is the latest to make its way in the top martial artists in the world list. The fitness enthusiast and action hero of Hindi cinema shared the same news on his Instagram with the caption Jai Hind. The actor started his training for Martial arts, especially Kalaripayattu, when he was just three years old. Kalaripayattu is a type of Martial arts that is performed on the battlefield along with weapons.

If we have to pick one of his best action movies in which Vidyut showcased his art, it would be the Commando series (all the three parts) that garnered him many accolades. He started his career with a Telugu movie- Shakti, in 2011 and the same year, he debut in Bollywood with Force.

The stalwart Donnie Yen is a Hong Cong Chinese actor, film director, martial artist, action choreographer and stunt man. Not many know Donnie is also the champion of the Wushu tournament. The actor came into the limelight with his Mixed Martial Art that he brought into mainstream Asian cinema with his movies. One of his movies that gained him stardom was Ip Man, in 2008, in which he played the role of Bruce Lee’s teacher- Wing Chun grandmaster.

The actor then went on to gain fame internationally with his film Rogue One: A Star Wars for his portrayal of blind battle monk Chirrut. Yen is also credited for making Wing Chun popular. Wing Chun is a well-known form of the self-defence and concept based style of traditional Southern Chinese Kung fu involving quick arm movements and strong legs.

Vietnamese–martial artist, Johnny Tri Nguyen, has worn various hats as he has also choreographed in many American action movies, acted in films and performed stunts in the Vietnamese film industry. He was only 9 when he competed in on the U.S. National Team as Martial artists. He then rose to fame as a stuntman in Hollywood with movies like Spider-Man 2 (2004) and Jarhead (2005).

Johnny Tri Nguyen then starred in Vietnamese movies like The Rebel in 2007, Clash in 2009 Để Mai tính in 2010, and Tèo Em in 2013, in which he showcased his art to the fullest. These films broke many box office records and earned Johnny Tri Nguyen the title of one of the best martial artists in the world.

The American Martial artists, film producer and actor, Wesley Snipes professes multiple arts. Snipes was 12 when he started his training in martial arts. He holds a 2nd-degree black belt in Hapkido and  5th-degree black belt in Shotokan Karate that helped him become one of the top martial artists in the world. Wesley Snipes has also received training in Capoeira under Mestre Jelon, Kickboxing, kung fu at the USA Shaolin Temple and Brazilian Jiu-Jitsu.

He was 23 when he made his debut as an actor in Wildcats in 1986. He then appeared in many shows, music videos and feature films that include Martin Scorsese, “Bad”, and Streets of Gold, respectively. By 90’s he became a famous name in American Cinema, but it was his breathtaking roles in movies like New Jack City in 1991, Passenger 57 in 1992, Blade film trilogy (1998–2004) and The Expendables 3 in 2014 that made him a star.

Jean-Claude Camille François Van Varenberg, aka Jean-Claude Van Damme, is a renowned film-maker, fight choreographer and one of the best veteran Martial artists in the world. Talking about Jean-Claude Van Damme childhood, he was just 12 when he started learning Karate at the National School of Karate. He continued his training for four years. He later learned other forms of martial art such as kickboxing and full-contact Karate and made his directorial debut with his martial art film called The Quest in 1996.

JCVD is also known for a couple of martial arts action movies that include Kickboxer in 1989, Death Warrant in 1990, Street Fighter in 1994 and Maximum Risk in 1996.

She is amongst the few best female martial artists who have received fame through their art. This Malaysian actress is best known for her Hong Kong action films. In 1997, Michelle Yeoh was internationally acknowledged for her strong role in the Bond film – Tomorrow Never Dies. It was her martial arts films and series Crouching Tiger, Hidden Dragon and Star Trek: Discovery that got her immense recognition on the OTT platforms.

The beautiful actress had also won the Miss Malaysia pageant in 1983. Rotten Tomatoes has ranked the actress as one of the greatest action heroines of all times. That’s not it in 1997; she was listed amongst the 50 Most Beautiful People in the World by People.

The heartthrob, Iko Uwais, who has garnered a huge fan following through his ongoing Netflix web series- Wu Assassins, is also a popular martial artist in the world. The young actor got his big break through martial art movie Merantau released in 2009, and since then, the actor has worked in many phenomenal projects such as The Raid 1 and 2 (2012), in which he showcased his natural martial art.

Not many know that Iko Uwais’ grandfather was Silat master, a type of martial art that is famous in many areas of South-eastern Asia, who founded a Silat school; thus, martial art is definitely in the actor’s blood.

Our list of best martial artists in the world would surely be incomplete without naming the God of martial arts, the late Bruce Lee. He was adept in a number of arts and had a wide range that spanned acting, directing, martial arts performer, as well as the instructor. Building upon his knowledge of the martial arts, he developed a hybrid martial arts philosophy and laid the foundation of Modern Mixed Martial arts. Lee learnt martial arts from his father and then studied Wing Chun.

He produced Hollywood and Hong Kong movies that raised classic martial arts films to global popularity and integrated them into countless mainstream movies. Bruce Lee died young in 1973, leaving behind a legacy that has been very ably carried forward by the likes of Jackie Chan and Jet Li. The legendary Bruce Lee has left an indelible impression on the fans of martial arts or maybe just good-old action movie buffs.

In this blog, we have curated the top 10 martial artists in the world with the special mention of God of Martial arts-Bruce Lee. Though, the list is endless as there are hundreds of martial artists across the globe who has carved a niche in this genre. However, these have made it to the list because of their cinematic presence, widespread popularity, commercial appeal and passion for taking martial arts to another level. Do let us know if we have missed any of the artists that deserve to be in the list.

1. Who is the no 1 martial artists in the world?

The late Bruce Lee was and will always remain the number one martial artists, followed by the living legend Jacky Chan.

2. What is Bruce Lee famous for?

3. Is Akshay Kumar a martial artist?

Akshay Kumar martial is trained in Muay Thai and holds a black belt in Taekwondo.

4. Which Bollywood actor is a trained martial artist?

Besides Akshay Kumar, some of the actors who are trained martial artists are John Abraham, Randeep Hooda and Urvashi Rautela.

Vidyut Jamwal received training in Kalaripayattu in an Ashram in Kerala.