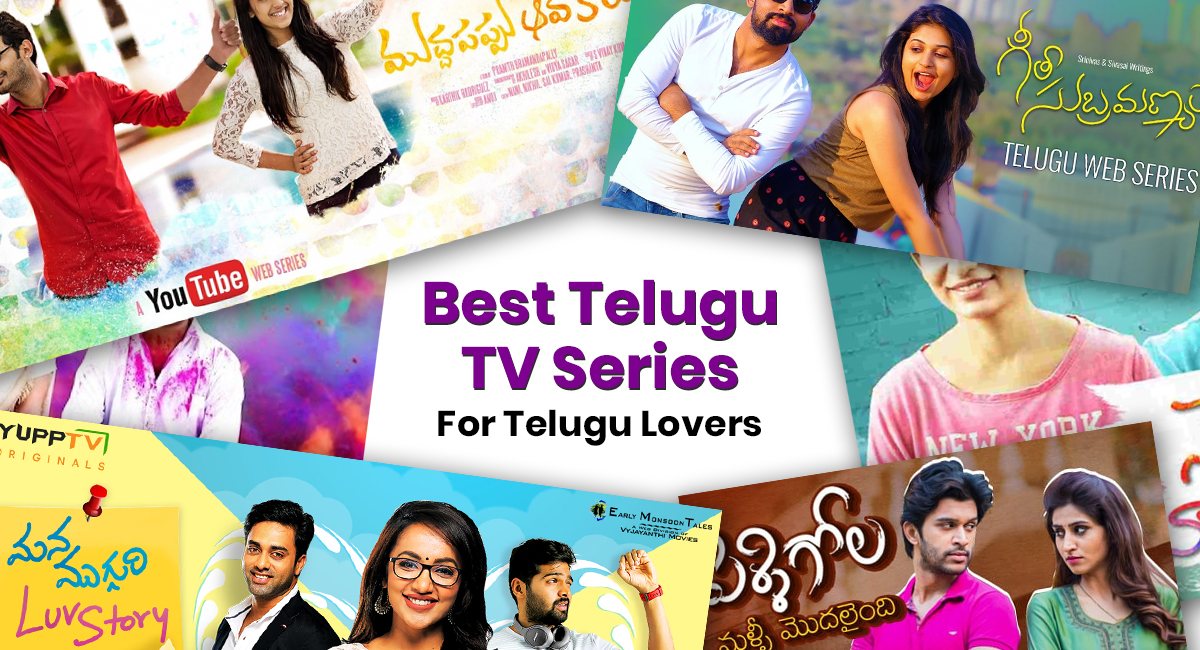 With the type of content has been made in the Telugu industry, the demand for Telugu TV series has gone up. The Telugu web series is Available on YouTube and other digital platforms. Here we have curated the best Telugu TV series that every Telugu lover should watch.

Premiered in 2016, Muddapappu Avakai is the first-ever Telugu TV Series. It has five episodes. The story of the series centers on the happy couple who fall in love before their love marriage. The series has the best of the comedy dialogues that will tickle your bones and director, Pranith Bramandapally has shown the story in the unique way which made it one of the best Telugu TV series.

The comical web series is based on true stories. The series captures funny situations in which the audience can relate. Jahnavi Dasetty is the face of the series; she makes amazing videos. The videos look natural, shirt, and crisp and have comical essence. Seeing its viewership, it is one of the top-rated Telegu TV series.

Premiered in 2020 is the latest Telugu TV series that is set on the couple who live in a live-in relationship. Once the couple starts living together, life does not seem beds of roses as it used to be back and soon misunderstand crops up.  Geetha Subramanyam is a story of every couple. The series is humorous and spicy, and you would love to see what happens in the end. Directed by Srinivas and SivaSai Writings, this Telugu TV series is worth watching do add in your list of Telugu web series to watch.

Directed by Mallik Ram, the TV series is humor story about a couple who does not like which to marry and instead runs their wedding day. However, destiny had other plans for both. They both fall in love with each other, following which the series showcases a family drama that is worth watching. If you are looking for simple yet unique Telugu content, then do watch this TV series.

Pilla is Urban Comedy, which garnered colossal fan falling. The plot is set on the pre-marital pregnancy. Directed Pavan Sadineni, this TV series is ten episodes long. Do watch this TV series to know what all is cooking around in the series.

The family entertainer revolves around the life of a Radio Jockey who is looking for the love of his life. Soon love knocks are door, and he meets the love of his life. As the series continues, you will find all the hardships that he goes through. This is one of the best Telugu TV series. Do watch if you are looking for interesting Telugu content.

Endukila is a comedy TV series that compromises of 10 episodes. It features the story of a man who believes that there is bad luck in his life. Soon things come on track when he finds his love interest. He tries his luck to woe the girls. To know what happens next, you would have to watch the TV series. The story is a perfect blend of drama and comedy.

Posh Poris is 10 episodes long TV series which is based on the lives of young urban girls who live in the hostel. The series depicts hostel life with which most of the girls can relate. As the stories move ahead, new trial and tribulations are faced by the girls, however, face each problem. The story is convincing and impactful.

Premiered in the year 2016, Nenu Naa Girl Friend was one of the top-rated Telugu TV series of that year. This is a romantic comedy. Nenu Naa Girl Friend focuses on the life of the architecture-Karthik, who falls in love with his colleague. That’s not it; the series has much more, do watch the series to know what happens next in Karthik’s life.

The mini-series is one of the top-rated TV Telugu series, and every Telugu should watch this. The story begins with the narration of Arjun and Monica. As the tale dwells, you will see the aspects of leading characters at different stages of love.

Kailasapuram is a story of the youth of the town that is called Kailasapuram. The story of the TV series talks about life-threatening problems that are caused because of Ganja. As the story moves forward, one would release how Ganja plays a negative impact on the lives of youth. It is one of the top Telugu TV series of the year and has received 8.7 stars from IMDB.

Mana Mugguri Lovestory revolves around the life of a confused girl who does not know what to do next until she falls in love with two boys. Yes, you read that, right! Watch the series to know who she finally chooses and have to reject it at the end.

703 is a Telugu Horror Thriller that is high on technical values. It has a gripping story that makes the audience know what is going to happen next. This is one of its kind TV series that will surely move you.

This was our list of best Telugu TV series that every Telugu lover should watch. Each TV series has different from the other. Do watch them and share your favorite TV series from the list.