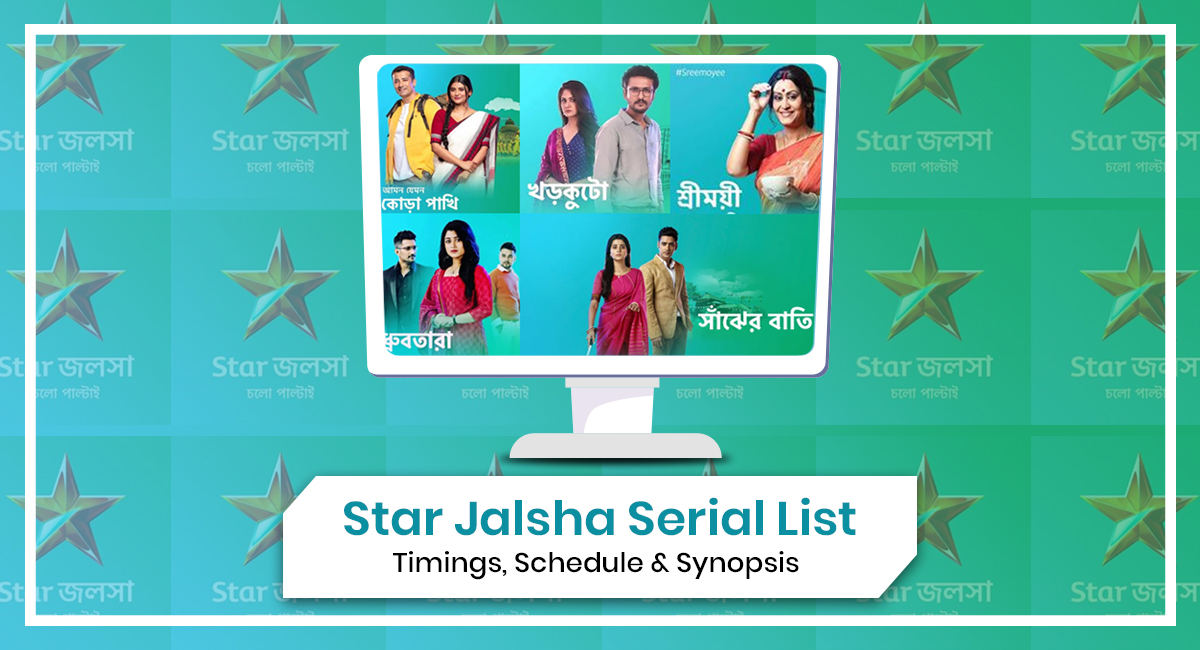 Star Jalsha is a Bengali entertainment channel owned by Star India. This channel broadcasts drama, family, comedies, crime shows, reality shows, and many more genres to entertain the viewers.  Other Bengali Channels like Zee Bangla bring up exciting shows for the viewers. If you do not want to miss your favorite serials, you must know the shows’ timings and schedules. In this blog, we have listed the Star Jalsha serial timetable 2022. We have created a separate list of the afternoon and evening shows for your convenience. You will also get to know the synopsis of the most-watched serials on the list. So, go ahead and read the blog to know more.

Star Jalsha is a Bengali entertainment channel that airs amazing serials from every genre. We have collated the synopsis of the most viewed serials on the channel. You can go through the show’s basic storyline and decide what you want to watch. You will also get information regarding the serials’ star casts, directors, and genre. So go through the Star Jalsha serial list 2022 of your favorite genre to enjoy the watch.

First, the latest name on the Star Jalsha serial list is the show ‘Nabab Nandini.’ The premiere of this Bengali TV series recently took place on 8 August 2022. The storyline of this serial tells about two persons, Nobab and Nandini. Nobab is an enthusiastic football player, whereas Nandini works as an officer at one of the biggest hotels in Kolkata.

Dance Dance Junior Season 3 comes back with a bang this August 6, 2022. This brand new season will have a total of 21 contestants who will compete with each other on the stage. Watch this new dancing sensation series on Hotstar. Undoubtedly, this dance series will be a treat for Bengali audiences. It is anticipated that the show’s makers will invite the veteran artist Mithun Chakraborty on the show, who has also appeared in the past two seasons. Under the Star Jalsha new serial 2022 list, this reality show will surely hit the records.

The Star Jalsha Bengali serial list is incomplete without the ‘Guddi’ serial. The soap opera, released in February 2022, immediately won Bengali viewers’ hearts. As per the show’s plot, Mrinalini Bose, aka Guddi, aspires to become a Police officer; on the other hand, Yash Chatterjee, whose character is played by Rano Joy, is an IPS officer.

Anurager Chhowa is a new name on the Star Jalsha all serial list. The drama TV series was released in February 2022. The show is a remake of the Malayalam show Karuthamuthu.

Next popular name on the Star Jalsha current serial list is ‘Aalta Phoring’, whose first episode was telecasted on January 2022. The story of this Bengali drama TV series show explores a struggling girl who likes to do gymnastics; however, she gets separated from her family due to a cyclone.

A popular show on the Star Jalsha Bangla serial list is ‘Dhulokona.’ It started on July 2021 and is still running on the Star Jalsha channel. Lalon, aka Lal, is the show’s hero working as a driver in a middle-class joint family. Also, he can sing and perform rap music. He encounters Tuni (Manali), the caretaker of the family in which he is working. A sweet fight occurs between them, after which they fall in love.

The story revolves around a girl called Amon. She has been abandoned form her family at birth. Now a couple has raised her as a tribal village girl. She aspires to become a journalist in the leading newspaper in Kolkata. Her mind is preoccupied with the quest to search for her parents and know her roots. Meanwhile, she has an encounter with a jovial young man, Ankur. They started to fall for each other amid Amon’s attempt to search for her identity. It is interesting to watch how the story evolves and takes turns.

Ujian is a Cardiologist who turned into a solitary man after he lost his mother. He has grown to be egoistic and rude with everybody around. He completed his medical studies in the UK and came back to India. Through his hospital patient, he meets a girl named Hiya. They both cannot stand each other and fight all the time. The story develops from here and shows how their clashes turn into love and further into their family.  It is one of the loved drama shows in the Star Jalsha new serial list 2022.

The story is about a girl named Gungun, who is complex and sophisticated. Soujanyo comes into the story as her counterpart, which belongs to a joint family. Their paths cross, and the story starts developing from there. The genre of this serial is a family drama with some romance and comedy elements. The serial portrays the importance and value of a joint family.

This is a beautifully crafted serial that revolves around a homemaker. Sreemoyee is the protagonist of the serial who fulfills all her responsibilities dutifully. Her family member includes laws, three children, and an egoistic husband. She has given her life for the family but never acknowledged it. Later she realizes the need to carve her own identity apart from being a homemaker. She polishes her singing skills and starts on her journey to make an identity of her own. It is one of the most-watched shows in the Star Jalsha serial list. You can also go ahead and check the timing of Star Plus serials.

Mahapeeth Tarapeeth is a mythological drama that revolves around the goddess Sati. The serial shows how lord Vishnu destroys her body after she gives up her life. There are many places where her body parts feel. One of the places is Tarapeeth. Tantric Hindu temple projects the known and unknown story around the incident, and the story revolves around it. The serial plot is set in 19th century Bengal where the goddess’s power is narrated. In connection with her devotee Bamakhepa, she abolishes all superstitious malpractices of the present times.

Dhrubotara is a series that portrays the complexity of relationships, family, and love. There are three main characters: Dhrubo, Tara, and Agni. Tara and Agni have grown together and loved each other. When they are about to confess their love and move forward in a relationship, we see a twist in the story. A man enters the story and suggests that Tara marry her to save the family business. This seemed a good proposal for the family, yet her heart belonged elsewhere. These circumstances drifted them apart. Dhrubo, the businessman, knew about their affection and made shrewd steps to keep them and blame the boy. This serial is among the most watched show in the Star Jalsha serial list.

Ke Apon Ke Por is another Star Jalsha serial that has gained many viewers. It is a great family show with decent dialogues and real characters. The story revolves around a family that faces day-to-day problems and goes through all the difficulties together. This family drama is great to watch as it combines love, suspense, comedy, and romance in a relatable context. The moral of the story is that the strength lies in the unity of the family.

Sanjher Baati is a light serial which revolves around the lead role, Charu. She had lost her mother when she was young. Post that, her father married another woman. Now Charu is compelled to live with her stepmother and stepsister. They are envious and never leave a stone unturned to blame her and bring her down in front of her father. She has gone through so many difficulties and problems in life that she can see no hope in life. Her life changes when she meets a young man, Arjio, who starts loving her. Further, she learns he is a wealthy businessman and wants to marry her. They got married, and they started their beautiful life together. If you like such storylines, you can consider taking a look at all-time favorite romantic movies.

The Bengali entertainment industry is one of the oldest in the country. The history of Bengal can be traced back to great storytelling. Today, many directors and screenplay writers have kept the bar high with exciting serials. Star Jalsha is a Bengali entertainment channel, and its serials and shows reflect present-day life and its problems. So, don’t miss watching the Star Jalsha current serial list. We have listed the Star Jalsha serial list timetable in this blog to keep you updated with the serial timing and schedules. Also, if you are thinking about which serial you should follow, then you need not worry. We have also helped you with the synopsis of some well-received serials. We hope you enjoyed reading the blog.