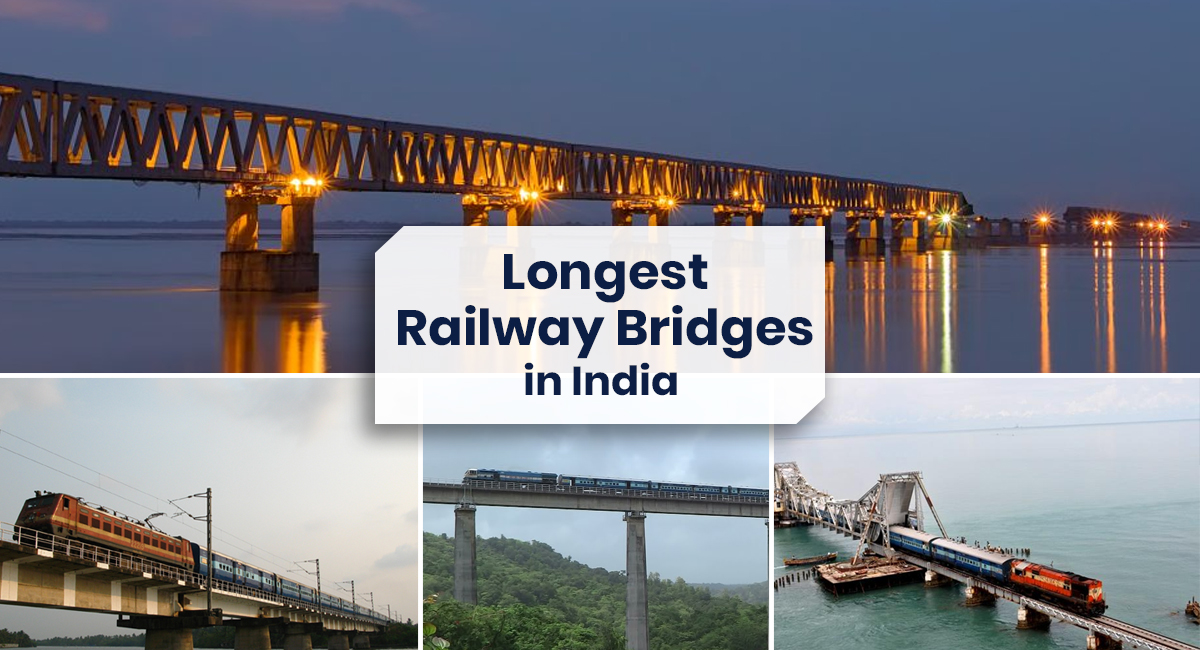 With each year, India is taking a leap with improved infrastructure. The country has some of the best structures, expressways, railways, dams, flyovers that have carved international standards. And not to forget, India also has some of the longest railway bridges that are known worldwide for their grandeur and services. In this blog, we have curated 10 longest railway bridges in 2022 that every Indian must explore.

Jubilee Bridge is considered to be an engineering marvel-pride of India. It is built over Hooghly River and stretches between Naihati to Bandel in Calcutta. It is one of the oldest railway bridges in the country. In the year 2016, Sampreeti Setu was built as an alternative to the Jubilee Bridge. It is 4.5 m long and is one of the mesmerizing bridges and west Bengal.

This railway bridge is built in the south of Honnavar in Karnataka state and was completed in the year 1994. It is amongst the longest bridge on that railway and longest railway bridge in the state as well. It stretches over the Sharavathi River that originates from the Linganamakki dam.

Built-in the year 1914, the Pamban Bridge connects Mandapam town with Pamban Island and Rameshwaram. It was the first sea bridge of the country and longest sea bridge in India before the construction of the Bandra-Worli Sea Link. Pamban Bridge is known to be a bascule bridge under which ships pass. In the parallel of this bridge, there is a road bridge called the Pamban road bridge that is of the well-known road bridges in India.

This bowstring-girder bridge also spans over the Godavari River in Rajahmundry, India. It is the latest bridge to be added in the list of bridges that stretches over River Godavari. It is one of the longest priestesses’ concrete arch bridges in Asia.

This rail bridge runs over the Mahanadi near Cuttack in the Indian state of Odisha. It was built in the year 2008 and is designed for the trains that run at the speed of 160 km per hour. The bridge is believed to withstand an earthquake. It is the most significant railway bridge in Orissa.

Next on our list of longest railway bridges in India is Old Godavari Bridge, which is also famous as Havelock Bridge. The bridge spans over the Godavari River in Andhra Pradesh. It serves trains that run between Howrah and Madras. It is counted amongst the three bridges that are constricted over River Godavari. There is another bridge around Holy Godavari called Kovvur-Rajahmundry Bridge. It is known to be Asia’s longest road-road-cum rail bridge that crosses a water body

You might interest reading: Best Wildlife Sanctuaries in India

Also known as Upper Son Bridge, Nehru Setu Bridge is constructed over Sun River. It connects Dehri-on-Son and Son Nagar, in Bihar. The length of the bridge is ‎3,059 meters and was designed with steel girders on stone pillars. Nehru Setu Railway Bridge is also one of the oldest and longest bridges in India as it was started in 1900.

This is one of the longest bridges in India. The total length of this bridge is 4.94 kilometres. This is a combined rail and road bridge over Brahmaputra River in the north-eastern Indian state of Assam. It stretches between the Dibrugarh district and the Dhemaji district. The bridge took approximately 200 months to complete. The bridge is situated in an earthquake-prone area. It was India’s first bridge that had complete welded steel-concrete support beams that can survive earthquakes of magnitudes up to 7 on the Richter scale. Also, it is the 2nd most extended rail-cum-road bridge in Asia.

Vembanad Rail Bridge is also one of the longest railway bridges in India that connects Edappally and Vallarpadam in Kochi, Kerala. The length of the bridge is estimated to be 4,620 meters. The construction of the bridge started in the year 2007, and it took three years to complete. The bridge was constructed Rail Vikas Nigam Ltd., Chennai PIU, A Government of India Enterprise (RVNL). It is earmarked for trains carrying freight only. The bridge has regular traffic of 15 trains.

Check this out too: Natural Wonders of India that You Must Explore