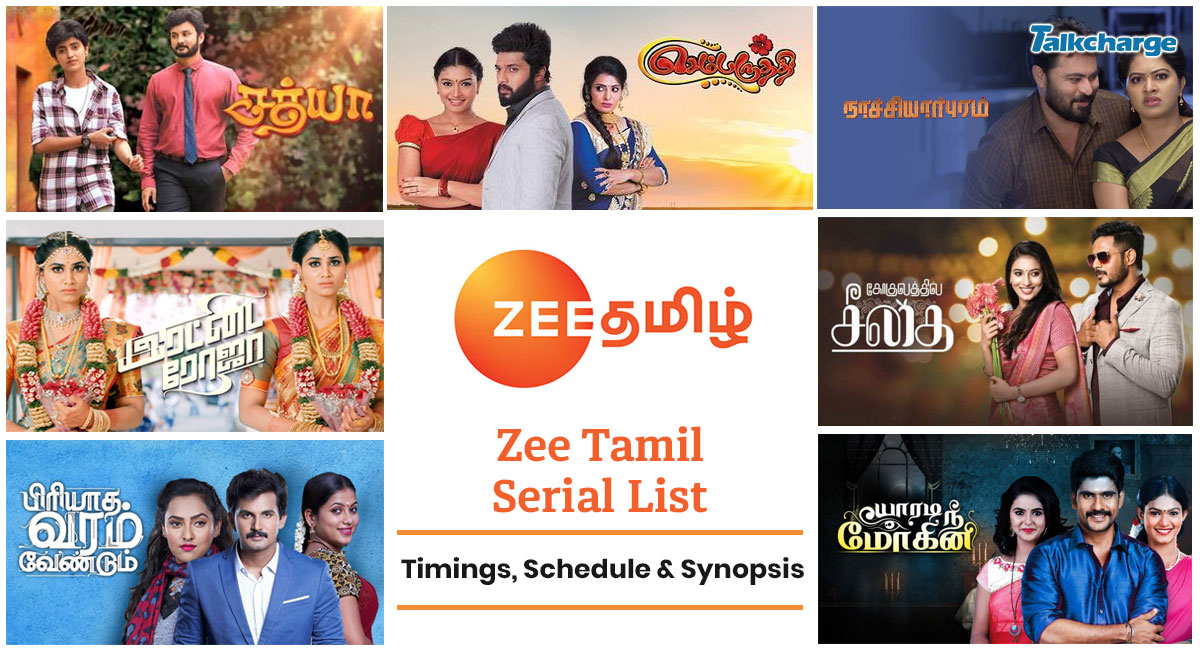 Starting in 2008, Zee Tamil is an Indian regional channel backed by Zee Entertainment Enterprises. The channel has also recently come up with the Tamil movie channel- Zee Thirai. Zee Tamil is the third south Indian channel after Zee Kannada and Zee Telugu. In the year 2017, the channel was under revamp. Since then, it has been doubling its viewership like leading channels Star Plus and Colors. In this blog, we have compiled the Zee Tamil serial list along with the timings and synopsis of every serial.

If you are a fan of reality shows, then you must watch this latest Zee Tamil serial. The reality TV series showcases 12 Zee Tamil actresses who take part in performing the exciting tasks given by the team. The TV series concept is also about judging the compatibility of all lead actresses in various fields like sports, cooking, general knowledge, dance, singing, acting, problem-solving capabilities, and a lot more. The performance of the female leads will be judged by the judges, who will provide some scores to them as well. The worst performer will be eliminated from the show, and the one who is top in all the tasks will be awarded the ‘Super Queen’ title.

In Zee Tamil new serial name, Run Baby Run, is a popular one. This Tamil reality game series started in February 2022 and is shown every Sunday on Zee Tamil at 13:00. The game show is about Zee Tamil’s soap opera families and the Tamil movie industry. In this TV series, the actors will fight against each other in complex tasks.

Hosted by: Kiki and RJ Vijay

The reality show Survivor is a popular one in the Zee Tamil serial names 2022. It is the Tamil version of the internationally famous reality show-Survivor. In this show, participants are left on the marooned island for 90 days, away from their regular lifestyle; they have to fight back with every ordeal and test. The show has 18-19 participants, and the winner will get a winning amount of ₹1 Crore. The show is aired on the Zee Tamil channel from September 2021. The names of 18 contestants of Survivor Tamil 2021 are Vijayalakshmi Ahathian, Gayathri Reddy, Srushti Dange, Nanda, VJ Parvathy, Vikranth, Besant Ravi, Umapathy Ramaiah, Lady Kash, Amjath Khan, Narayan Lucky, Lakshmi Priyaa Chandramouli, Saran Shakthi, Aishwarya Krishnan, Indraja Shankar, and Ram C.

Next on Zee Tamil serial name list is Chinna Poove Mella Pesu, a Tamil version of the top-rated Zee TV show Kundali Bhagya. The show revolves around Preeta Arora, who is a physiotherapist by profession and Karan Luthra, a famous cricketer. The two are opposite of each other; however, their fate brings them together as they fall in love.

This Zee Tamil serial was premiered in 2020 and is also digitally available on Zee5 and Airtel Xtream. The show is the official remake of the Zee TV former TV serial Guddan Tumse Na Ho Paiga. It is a story of Hasini and Abinav Janardhan (AJ), who have an age gap and contrast personalities. Hasini is a fun-loving going girl, whereas AJ is dedicated and known to be Mr Perfectionist. Though they both cannot stand each other but are forcedly married. Will love bloom between them or their marriage would be a compromise?

What happens when a simple middle-class girl is married to a spoilt brat? Gokulathil Seethai is one of the top-rated shows in the Zee Tamil TV serials name list. It revolves around a young woman who is married to rich and arrogant men. The young women then pledge to make him a responsible person.

Started in August 2021, Ninaithale Inikkum is the latest entrant in the Zee Tamil serials name list 2022. It also streams on Zee 5 and Airtel Xtream. The TV series is an official remake of the Zee Bangla famous show Methai. It is the life journey of a cheerful, sweet seller.

Sathya is one of the well-known name in the Zee Tamil serial list 2022. It is the remake of one of the Odia serial-Sindura Bindu. It is also made in other languages like Telugu and Malayalam, such as Suryakantam and Sathya Enna Penkutty. It is a romantic family drama that revolves around the main protagonist-Sathya.

Premiered in March 2021, Pudhu Pudhu Arthangal is one of the best programs shown by Zee Tamil. The TV program is the official remake of the famous Zee Marathi TV series Agga Bai Sasubai. It is a beautiful tale of how well a mother in law- Lakshmi, bonds with her daughter in law- Lakshmi. They share a peaceful relationship despite reoccurring ordeals.

The TV series runs around strong and stubborn women- Akhilandeshwari and her elder son, who falls in love with one of his servants, Parvathy. The show proves that love has no bounds. After all the odds and tribulations, the two come together, but will it be an end, or would they become a victim of the conspiracy? To know more, watch this Zee Tamil serial at 9 pm.

Next in Zee Tamil serials list is Oru Oorula Oru Rajakumari. The story focuses on a young overweight girl who has been struggling with body shaming. Later she is married to his father’s friend’s son, who happens to be a Kabaddi player. The story then shifts the focus on the married life of the couple.

Neethane Enthan Ponvasantham has been a part of the Zee Tamil Serial schedule since February 2020. It is a love story of a 20-year-old Anu and 40-year-old business tycoon, Surya. Despite the age gap, they both bond well and fight back with every ordeal to be with each other. Do watch to know what happens next in Anu and Surya’s lives.

Iniya Iru Malargal is a Tamil version of the Zee TV’s leading show- Kumkum Bhagya. It is a story of a middle-aged woman who runs a matrimonial hall and is looking for a perfect groom for her elder daughter. After many errors and tribulations, her daughter is married to the ace singer. Will they have a fruitful married life ahead, or things will not work between the two. To know lots more about the show, do watch Iniya Iru Malargal.

One of the popular names in the Zee Tamil serial list is Rattai Roja. The show is about twin sisters –Anu and Abi, who have different nature. Anu falls in love with a wealthy man-Santosh, and Abi falls in love with Santosh’s brothers. The story soon takes a turn where you will see lots of twists and turns. It is one of the highly-rated serials of Zee Tamil. You can watch the serial on the channel from 1:30 PM (Monday to Saturday).

Yaaradi Nee Mohini is the second-highest budgeted South Indian television series. Started in the year 2017, its last episode was aired in August 2021. The show completed more than 1200 episodes and became the longest-running serial on the channel. The supernatural show is now available on Zee5 and one of the popular name in the Zee Tamil serial list.

It is a story of Kalyani, who marries a foreigner without her family consent, on which her family disowns her. Years later, Kalyani’s daughter plans to Kalyani with her family. Started in September 2020, Suryavamsam went off the air in August 2021, the show aired for nearly one year but enjoyed high TRP. It was an official remake of the Zee Telugu TV series America Ammayi. The timings of the Suryavamsam serial was 1 pm (Sunday), and its running time was around 20-22 minutes per episode. You can watch all the episodes of this TV serial on Zee5.

Next in our Zee Tamil shows name is Kandukonden Kandukonden, which means I have found it. The TV series is about a simple girl named Preethi who marries an arrogant person-Vikram. After marriage, Preethi tries her best to turn Vikram into a sensible person.

This was one of the best supernatural shows aired on the Zee Tamil. The TV series revolved around the king, who is separated from his lover, and his mother murders her loved one. It is a story of recantation, where finally, the king is united with his love after facing all the odds and tribulations. It is one of the popular one in the Zee Tamil TV serial name list.

Synopsis: This Soap opera is set with the traditional backdrop of Srivilliputhur allies Nachiyarpuram. It is a story about two families set apart in the past. Ironically, a love story brings both the family together. Will both the families mend their differences? To know more, watch Nachiyarpuram only on Zee 5.

Zee Tamil is one of the leading regional channels in India. The channels premier an array of TV serials that are winning many hearts. Currently, the channel has also started airing some of the best Zee TV serials that are dubbed in Tamil. In this blog, we have curated the latest list of Zee Tamil serial names with timings. You can also binge-watch these serials on Live TV apps like Zee 5.

1. Which is the best serial in Zee Tamil?

Some of the best Zee Tamil serials are Kumkum Bhagya., Poove Poochudava, Kalyana Veedu, Survivor and others listed above.

2. Which serial has the highest TRP in Zee Tamil?

3. Where can I see Zee Tamil serial?

Zee Tamil serials are available on OTT platforms such as Zee 5. You can also watch it on Airtel Xtream.

4. What are the programs in Zee Tamil Today?

Above, we have shared the entire schedule of Zee Tamil serials Today.

Vidhya No.1 serial is telecast at 8:30 pm on the Zee Tamil channel.

7. What are some Zee Tamil old serial names?