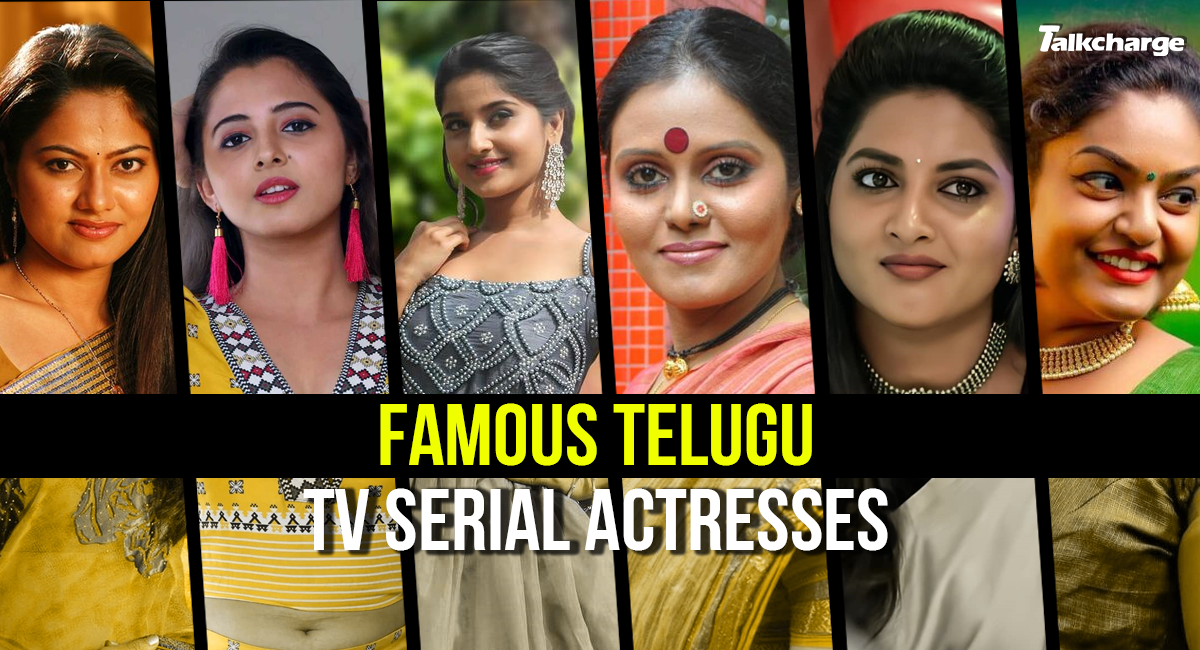 What makes a TV serial successful? Obviously, it’s actors and story! Once the show becomes popular, actors’ especially leading characters, become a household name and enjoy love from all quarters; the same is true with Telugu Serial Actresses. These actresses contribute immensely to driving the growth of TV viewership.  Actresses like Suhasini, Meghana Lokesh and many others listed below are currently ruling the Telugu TV industry.

Suhasini does not need any introduction! The vivacious actress has been part of several Telugu movies and is currently playing the lead role in Star Maa show Devatha. In 2003, Suhasini started working in Telugu cinema, and Chantigadu was her first movie. In the following years, she played an important role in two Tamil films, i.e. Adhu and Mannin Maindhan. She was then part of Telugu movies- Sundaraniki Tondarekkuva, Kokila, Gana, Aadivaram Adavallaku Selavu , Bhookailas and many others to name. She has also appeared in Bhojpuri movies Sharabi and Kurbaani. In 2011 she played a pivotal role in her debut Telugu serial Aparanji. Since then, the multitalented actress has produced and acted in serials like Iddaru Ammayilu, Naa Kodalu Bangaram and Girija Kalyanam. The audience is currently loving her as Rukmini in Devatha.

The beautiful Telugu serial actress Preethi Asrani hails from Gujarat and moved to Hyderabad to pursue acting. She started her acting career as a child artist in Telugu movies like Uu Kodathara? Ulikki Padathara? And Gundello Godari in 2012 and 2013, respectively. She then debuted through the short film-Fidaa. After working in a couple of movies, Preethi stepped into the Telugu TV industry with shows like Pakkinti Ammayi. This family drama is available on Zee5. She shot to fame through her pivotal role in the Telugu TV series Social. Undoubtedly, she comes on the one of the famous telugu TV serial actress name. She was last seen in Telugu action drama film- Seetimaarr.

Another well-known celebrity on the list of  telugu serial heroine name is Meghana Lokesh. Born in Mysore, Karnataka, Meghna started working in theatres at a very young age. After being part of nearly 270 shows, the actress was launched in the Kanada TV industry in a supporting role in Devi. The actress got her breakthrough Telugu hit TV series Sasirekha Parinayam which was telecasted on the Star Maa channel from 2013 to 2016. She then worked in Telugu short movies, i.e. Emotion and Beautiful Life. Meghana Lokesh was amongst the mentors on Zee Telugu’s Dance Jodi Dance. She was last seen in Raktha Sambandham as Tulasi. The show gained immense popularity, and Meghana became a household name.

Next on the list of best Telugu serial actress is Preeti Nigam. The pretty actress gained fame through her negative role in the Telugu television serials like Kasturi as Sunila, Chandramukhi and Swathi Chinukulu on ETV. Preeti has also played a supporting role in several Hindi movies like Welcome to Sajjanpur (2008) and Well Done Abba (2009). She was off lately seen in Bollywood movie Bolo Hau.

The beautiful actress made it to the Telugu TV industry in 2009 with her show Rangula Kala. The Telugu serial actress is known for her family drama that primarily airs on ETV Channel. Pallavi became a household name with her two back to back serials Bharyamani and Aadade Aadharam. She also won Nandi Award for Best Television actress for her role in Bharyamani. She is currently playing the lead role in the Paape Maa Jeevanajyothi serial that is broadcast on the Star Maa television channel.

Premi Vishwanath is a well-known Indian television actress who predominantly appears in Telugu and Malayalam TV serials. In 2014 she started her career in TV with  Malayalam TV show Karuthamuthu and then appeared in several Malayalam chat shows and serials – Badai Bungalow, Sell Me the Answer, Laughing Villa, Deal or No Deal etc. In 2017 started working in Telugu serial Karthika Deepam, and since then, she has appeared in several shows, including Chelleli Kapuram and Maa Varalakshmi Vratam.

The Telugu TV Actress list is incomplete without Ashmita Karnani. Born in Rajasthan, Ashmita Karnani is atop a Telugu TV serial actress. She entered the TV industry with her serial Padmavyuham, in which she played the role of Gowri and Chamundeswari. The serial aired on ETV. The beautiful actress rose to fame through her wide range of roles in Matrudevobha, Bhagyarekha and Mattigajulu. She has worked in nearly 15 TV serials. She was last seen in Telugu soap opera Madhumasam. Besides TV, Ashmita has been part of many movies such as Apudapudu, Aapadhamokkulavaadu, Collector Gaari Bharya, Om Namo venkatesaya etc. The actress also started her YuTube Channel in 2017 that has videos related to skin, beauty tips and fitness.

Aishwarya Pisse is one of the popular Telugu serial heroine names. The diva rose to fame through her role in Kannada serials Punar Vivaha and Anuroopa. She then appeared in Telugu serials- Agni Sakshi and Kasthuri. The mesmerising actress is currently busy with her serial Sundari. Since her debut, she has been part of several shows that aired on Star Maa, Star Suvarna, Vijay TV, Zee Kannada, ETV Telugu, Udaya TV and Colors Kannada.

Sameera Sherief is one of the famous Telugu serial actresses and producers. She was only 15 when she began her acting career.  “Aadapilla” was her first serial that premiered in 2006. Since then, she has been part of many Telugu serials like Abhishekam, Bharayamani, Moodu Mulla Bandham, Prathibimbam and Mangamma Gari Manavaralu. She then appeared in the Tamil TV serial “Pagal Nilavu” that was broadcast on Star Vijay. In 2017, the actress debuted as a producer in the Tamil serial“Rekka Katti Parakkudhu Manasu”, in which she played an important role as well.

One more name in the telugu serial heroine name list is Shobha Shetty. Well, Shobha Shetty is a model turned actress who got famous as her character name-Mounitha from her serial Karthika Deepam. She was also liked for her role in Sompa. In 2017, the actress debuted in the Kannada movie industry with Anjani Putra. She has also starred in Telugu serials Astha Chemma. Shobha has been awarded Best Actress for her role in Astha Chemna and best negative role for Karthika Deepam.

Above, we have curated Telugu serial actress list, along with photos. These actresses have left a substantial impact on the audience with an array of characters they have played over time. Do let’s know which is your favourite actress?