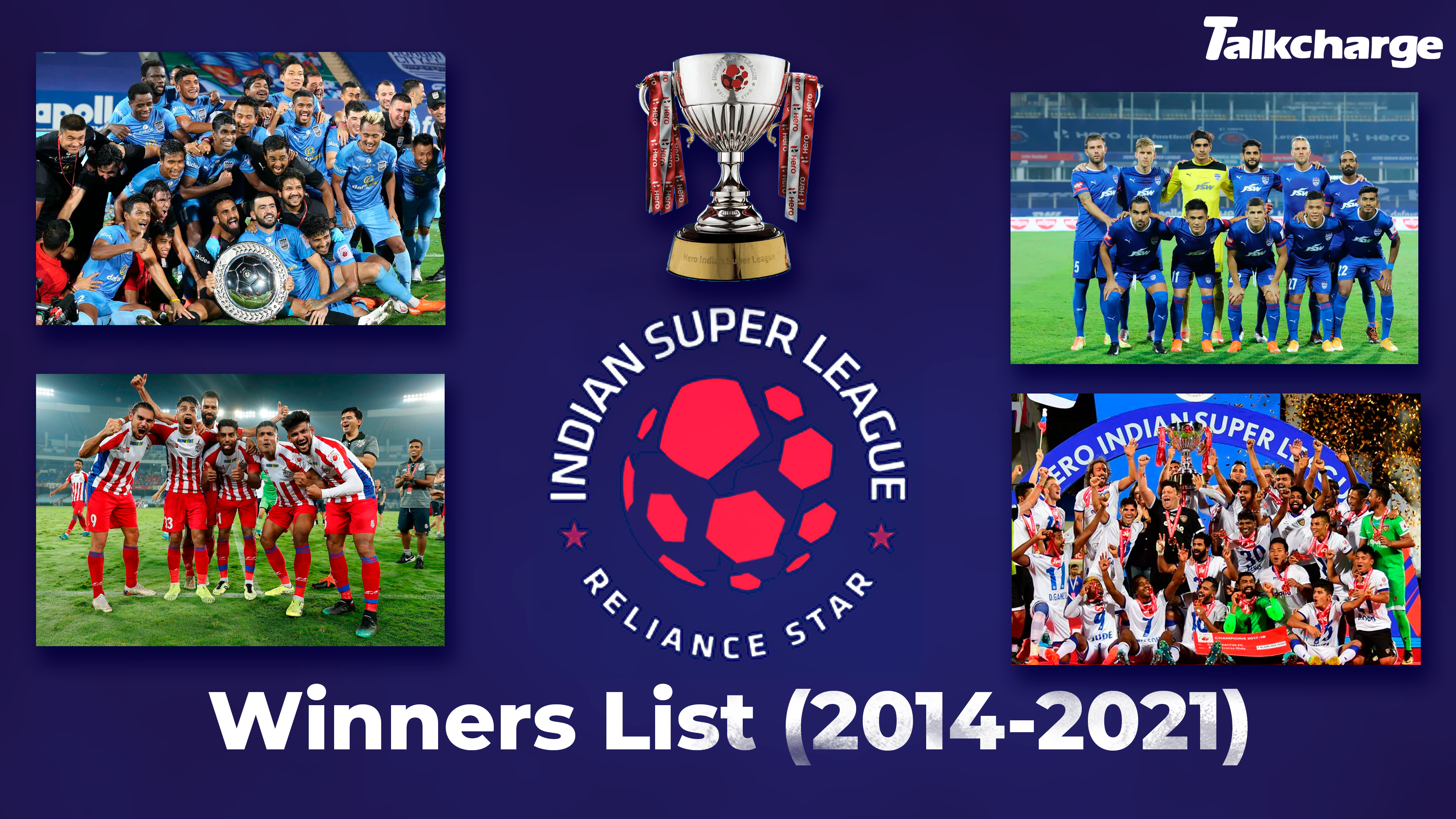 The Hero Indian Super League (ISL) is India’s highest level of football championship inaugurated in 2014. The tournament is supported by the All India Football Federation (AIFF). The league started with eight clubs (teams) and in the last league, it was extended to 11 clubs -ATK Mohun Bagan, Bengaluru, Goa, Chennaiyin, Kerala Blasters, Mumbai City, Odisha, East Bengal, Hyderabad, Jamshedpur and NorthEast United. Each season of the ISL starts in November and ends in March and each club plays against all the clubs, following the round-robin style.

The team that scores maximum points at the end of the league is declared as the Premiers and is awarded ‘League Winners’ Shield’ (trophy). The top four clubs qualify for the play-offs. The team that wins the semifinals and finals is declared the champions and defending teams for the next season. They are presented with the ISL Trophy and are qualified for AFC Cup (annual continental club football competition). Till now, 4 teams have won the ISL, with Mumbai City FC making its debut in the ISL winner list in the 2020-2021 season.

The seventh edition of the Indian Super League was hosted in Goa and had 11 teams. In total, 115 matches were played; Mumbai City FC earned 25 points from the first ten matches with eight wins. At the end of the league stage, the team registered two wins in the six games and knocked out ATK Mohun Bagan in the final match. Coached by Sergio Lobera, The Icelanders clinched the trophy of League Winners Shield and was the first club to win the ISL Championship title along with the premiers. The team also qualified for the AFC Champions League 2022 group stage.

Hero of the League: Roy Krishna

The sixth season of the Indian Super League featured 11 clubs that played 95 matches. ATK re-appointed Antonio Lopez Habas as their head coach for this season. Determined to win the tournament, ATK won the semi finale from Bengaluru by scoring 3-2 and made its way to the finale. The team defeated Chennaiyin by 3-1 in the finals and won the maiden title. ATK became the first ISL team to get their entry into the ISL winners lists for three times. In the same year, ATK merged with the Mohun Bagan AC and were known as ATK Mohun Began.

Hero of the League: Hugo Boumous

With 10 Indian super league teams, the fifth season of ISL kick-started in September. However, the tournament took a mid-season break due to India’s participation in the 2019 AFC Asian Cup. After the break, Bengaluru FC knocked out NorthEast United in the semifinals with the lead of 3-1and made their way to the finals, where they defeated Goa by scoring 3-2 and scripted their name in ISL winners list for the first time.

Hero of the League: Coro

Chennaiyin FC knocked out Bengaluru in the finals by scoring 3 – 2 and became ISL champions for the second time. The team got a neck to neck competition from Goa as both the teams score 1-1 each. However, Chennaiyin passed over Goa with 3-0. In the final match, the team has face off with Bengaluru, which lose the tournament by 2-3. The season had five teams that included Bengaluru, Chennaiyin (C), Goa, Pune City and Jamshedpur.

Hero of the League: Sunil Chhetri

The tournament featured 6 Indian super league teams, and ATK rose as the winning team. In the same year, Spaniard José Francisco Molina replaced Antonio López Habas, which paved ATK’s way to victory. In the 2016 ISL tournament, ATK lifted the trophy for the second time by defeating Kerala blasters in the penalty shootout-4-3 in the final match.

Hero of the League: Florent Malouda

The 2015 Hero Indian Super League won its maiden title and debuted in the ISL winner list. The team had a faceoff with ATK, the previous season winners in the Semifinals, where Chennaiyin FC defeated ATK by scoring 3-0 at the first stage and 2-1 at the second stage. In the final, the team knocked out Goa by 3-2.

Hero of the League: Stiven Mendoza

Atletico de Kolkata was the first club to make its entry into the Winners list of ISL. Under the head coach Antonio López Habas, the team wonders in the inaugural league itself.ATK scored 1-0 and became champions of the inaugural season by defeating Kerala Blasters in the finals. The first season had eight teams.

Hero of the League: Iain Hume

Founded in the year 2013, Indian Super League was inaugurated in 2014 with eight teams. The annual superlative Football championship has a huge fan following, making the tournament so popular in the country. The winning team of ISL is selected for the Asian Football Confederation (AFC). It is one of the oldest continental football competitions in the world.

2. Which is the strongest team in ISL?

ATK is the strongest team in Indian Super League as the team has been declared Champions for three times, which is highest than any other team.

3. How many teams are there in ISL?

Arindam Bhattacharya from ATK received the Golden Glove award for being the best goalkeeper in the 2020-2021 season.

The champion of the ISL 2018-2019 season was Bengaluru. They defeated Goa in the finals.

Long Hairstyles for Men That Suits Every Hair Type (with Images)
Charanjit Singh Channi Biography: From a Student Leader to a Punjab’s CM