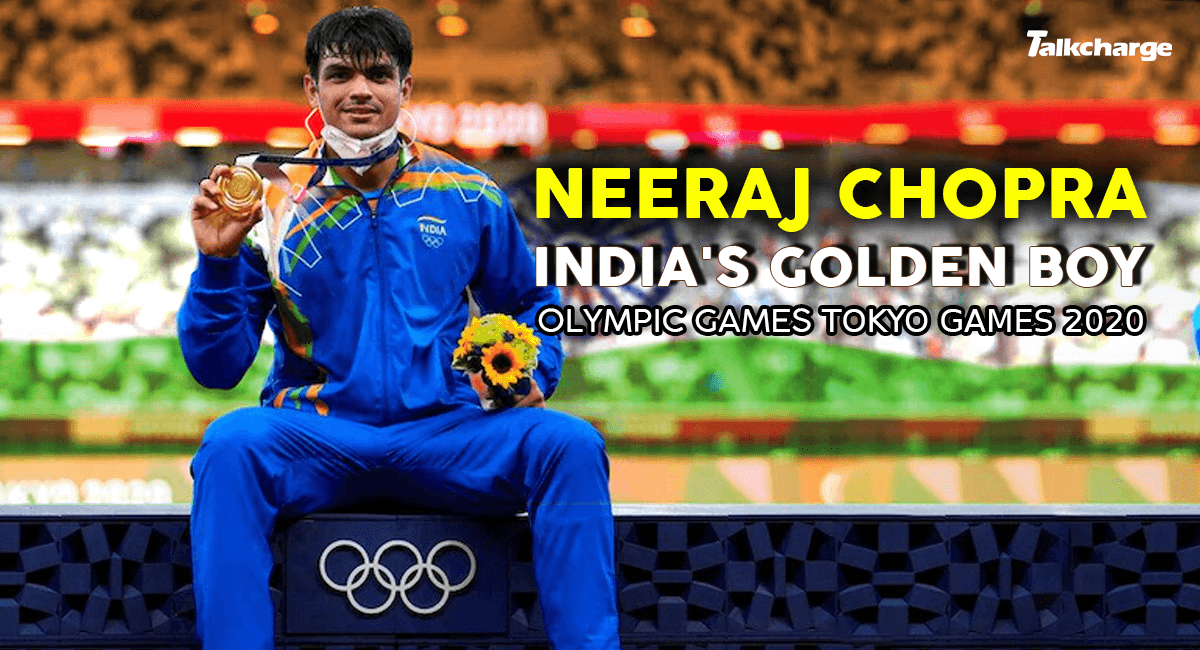 It took 100 years for India to embrace an Olympic medal in athletics! On 7th August 2021, Neeraj Chopra created history by winning a gold medal in Tokyo Olympics 2020. The 23-year-old athlete was barely 12 years old when he started his training in a track and field. He later went on to compete in the javelin throw. His father is a farmer from Chandra village near Panipat, who supported his calling and tried his best to give him the best of the training. In the year 2014, Chopra won his first international medal, and soon there was a string of wins. With each passing year, he bettered his game. In 2021, his throw of 88.07m was recorded as Neeraj’s Personal Best that qualified him for the international competitions including Tokyo Olympiad. His positive attitude and confidence has earned him this supreme stature. Scroll down to know about Neeraj Chopra, who is also A Junior Commissioned Officer (JCO) in the Indian Army.

Neeraj Chopra is amongst  7 Indian Olympic winners. He scripted the history with his stunning javelin throw of 87.58m (in his second attempt) in the finale round that won him a gold medal.  He is the first Indian to win a gold medal post-independence in track and field events. The 23-year old is also the first Indian athlete to top the qualification round with an 86.65m throw that itself gave a tough competition to his competitors.

In the final round of men’s Javelin Throw in Tokyo, held on August 7, he surpassed Czech Republic’s Jakub Vadlejch and Vitezslav Vesely. They went on to bag silver and bronze, respectively.

Neeraj not only clinched the gold medal but also outsmart his biggest rival Johannes Vetter, from Germany, who has thrown 90-plus in 2021, He has a personal best of  97.76m, but failed to make in the list top 8 of the 12-man final,

As of 2021, Neeraj is the second Indian to have won an individual Olympic gold medal besides Abhinav Bindra; in March 2021, Neeraj Chopra recorded his personal best throw of 88.07m, which made a new national record.

The young gold winner is coached by Klaus Bartonietz. The German biomechanics expert has been associated with the Chopra since 2018. Along with him, Neeraj was also trained by Uwe Hohn; however, in 2020 Bartonietz took sole charge of the gold medallist.

Chopra was an obese kid, and to get into shape, Neeraj visited the Panipat Sports Authority of India (SAI) centre, where javelin throwers caught his eyes, which led him to try his hand in the sport. Neeraj was first spotted by his then trainer and javelin thrower Jaiveer Choudhary, who first recognised his talent.

After getting trained from Choudhary for a year, in 2010, the the13-year-old Chopra was enrolled at the Tau Devi Lal Sports Complex in Panchkula. There he was trained by Naseem Ahmad, who helped him win gold with a new national record throw of 68.40 metres in the National Junior Athletics Championships in Lucknow in 2012. And then there was no looking back, for now, gold medal winner! He then participated in a number of international games and made India proud.

International Beginning: The Rise of the Old Medallist

In 2013, Neeraj participated in his first-ever international competition, the World Youth Championships in Ukraine. In the later year (2014), Chopra won his first international medal (silver) at the Youth Olympics Qualification in Bangkok. By 2015, he spruced up his throw to 81.04 metres in the 2015 All India Inter-University Athletics meet.

In 2016, Neeraj made his new personal best-82.23 meters and bagged a gold at the South Asian Games under the training of Australian coach Gary Calvert. However, he could not qualify for Olympics that year as he could not achieve the qualifying mark, which is 83 m. This did not let him lose hope, and he went to win a gold medal in the 2016 IAAF World U20 Championships in Bydgoszcz, Poland and set a new national record. Though he won the gold medal but could not qualify for Summer Olympics 2016.

Owing to his impressive performance in the 2016 Junior World Champion, in the same year, Neeraj Chopra was selected as the Junior Commissioned Officer (JCO) in the Rajputana Rifles with the rank of Naib Subedar by the Indian Army. The athlete continued to perfect his game and moved to the Sports Authority of India centre in Bangalore.

In 2017 Neeraj took forward his legacy of winning gold. He performed stupendously in the 2017 Asian Athletics Championships with a throw of 85.23 metres. Chopra then participated in World Championships that were held in London but was soon eliminated. He then participated in Zurich Diamond League in which he attempted the distance of 83.39 meters. During the finale, he was injured and thus, he withdrew from the competition. However, he got the 7th –place finish due to his best throw of 83.80 meters.

In 2018, Neeraj made it to Commonwealth Games and made one of the best throw- 86.47m, which made him the first Indian to win the javelin throw at the Commonwealth Games.  In the same year, he broke another national record with his throw of 87.43 metres at the Doha Diamond League.

Motivated from his previous performances, Neeraj debuted at the Asian Games, where he represented India. He again surpassed his record with a throw of 88.06 m that won him a gold medal.

Injury and Qualification for Tokyo Olympiad 2020

In 2019, Chopra suffered an injury in the right elbow and so could not participate in the 2019 World Championships in Doha. After a sabbatical of nearly 16 months because of his injury, in 2020, Neeraj made come back at an international competition. He marked his return and created a new record with the throw of 87.86 metres in the Athletics Central North West League Meeting in Potchefstroom, South Africa, which qualified him for the Tokyo Olympiad as he crossed the qualifying distance, which is 85 meters.

Neeraj Chopra has won the following prestigious awards because of his contribution to sports.

Neeraj Chopra made the country proud and scripted history by winning the gold medal at Olympics Tokyo. The 23-year athlete gave the highest throw in the finals and surpassed the champion in the javelin throw, Johannes Vetter, whose personal best is 97.76m. Besides recently winning a gold medal, he brought laurel to the country for his exemplary performance at several international competitions like Asian Athletics Championship, Commonwealth and Asian Games.

1. Which state did Neeraj Chopra belong to?

2. Neeraj Chopra is associated with which sports?

He is associated with Track and Throw.

3. What is the age of Neeraj Chopra?

4. What does Neeraj Chopra do?

Neeraj Chopra is a Track and field athlete who recently won Gold Medal in Tokyo Olympics 2020.

5. Is Neeraj Chopra in the Indian Army?

Yes, Neeraj Chopra is in the Indian Army. In 2016, he joined as the Naeb Subedar.

6. How much does Neeraj Chopra earn?

His endorsement fees is nearly Rs 20-30 lakh per year, and after winning Gold Medal at Tokyo Olympics, his endorsement deals are negotiated over Rs 2.5 crore per year.