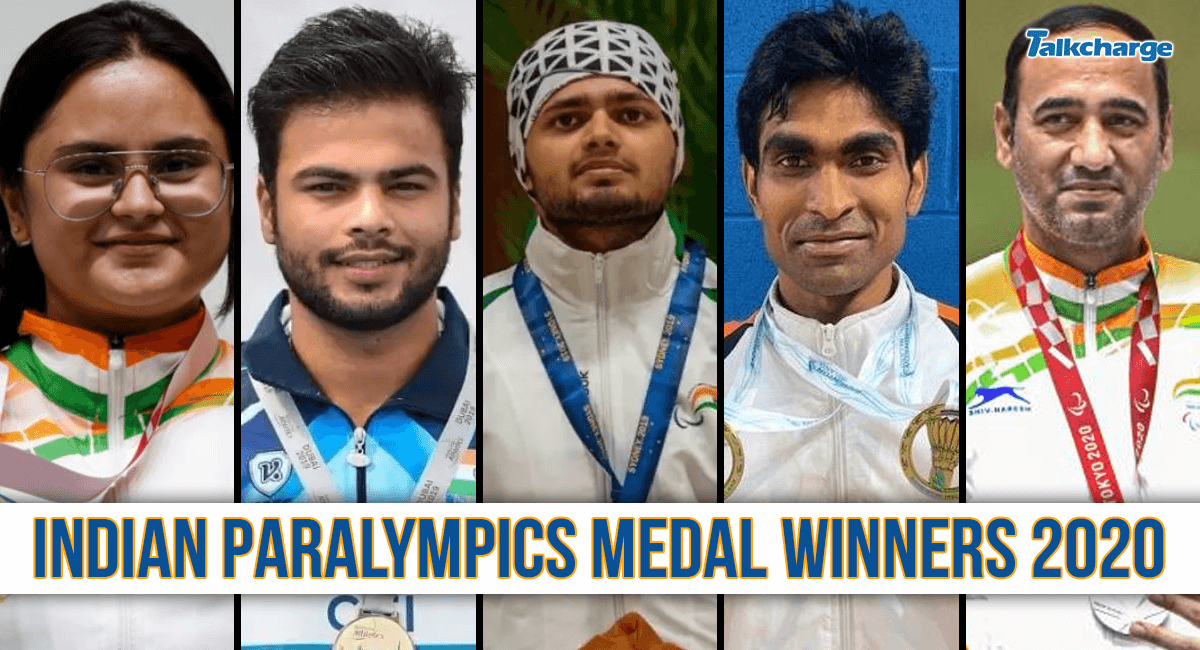 While seven medals in the Tokyo Olympics 2020 was no less than a treat for India, in Tokyo Paralympic, India went ahead to win 19 medals claiming its highest haul of all the seasons. With five gold, eight silvers, and six bronze medals, this edition of the Tokyo 2020 Paralympic Games will be unforgettable. Indian players not only upped the number of medals which was only four in the previous edition but also made several records. Avani Lekhara became the first woman to win multiple medals in the same edition, Bhavina Patel became the first Indian table tennis player to win a Paralympic medal, and Harvinder Singh secured medal in archery for the first time in Paralympics.

Here is the list of Indian Paralympic medallists at Tokyo 2020

The 19-year-old Avani Lekhara smashed all the records at the Tokyo 2020 Paralympic Games and set a new record with 249.6 in the women’s 10m air rifle shooting standing SH1 class final and became the first Indian woman to win the gold medal at the Paralympics. Avani Lekhara gave a tough competition to Paralympic champion Cuiping Zhang of China Iryna Shchetnik of Ukraine. The young gold medalist hails from Jaipur. In 2012, she met with a car accident which left her with complete paraplegia.  Her father encouraged her to not leave hope and excel in sports. After her archery training, she realized shooting is her calling, and we are glad that she took up shooting!

While Neeraj Chopra scripted history in the Tokyo Olympics 2020 in the same category with the throw of 87.58m, taking inspiration from him Sumit Antil, created a new record with a 68.55m throw which also became a new world record. The young athlete dreamt of becoming a wrestler; however, on losing his left leg in an accident, he was introduced to Javelin throw.

Manish Narwal clinched the third gold medal at Tokyo 2020 Paralympic Games in men’s 50m pistol SH1. The 19-year old made a new world record of 218.2 in his debut itself.  With his latest record in shooting, Manish ranks fourth in the world in Men’s 10m Air Pistol SH1. In 2020, he has been awarded The Arjuna Award for his exemplary performance in shooting sports.

Pramod Bhagat is a top-notch Indian Para-badminton player. He upped his game in men’s singles SL3 class in Tokyo 2020 Paralympic Games by winning the country’s first gold medal in sports this year. Pramod defeated Britain’s champion Daniel Bethell in the finals and became the world’s number one player in para-badminton men’s singles SL3.

Pramod hails from Hajipur, Bihar, and he was only five when he sustained polio in his left leg. At the age of 13, the ace badminton player developed a passion for Bad Minton. After his training, he won numerous medals on the global stage before clinging to gold in Tokyo 2020 Paralympic Games.

Before bidding adieu to Tokyo 2020 Paralympic Games, Krishna Nagar made sure to secure a gold medal in men’s singles SH6 Badminton. The top badminton player made it to the finals without losing a single game. He won the maiden title with 21-17, 16-21, 21-17 and defeated Hong Kong’s Chu Man Kai in the gold medal match. Krishna has also won a bronze medal in the 2018 Asian Para Games in Indonesia, silver medal 2019 BWF Para-Badminton World Championships in Basel, Switzerland, reforming qualifying for Tokyo Paralympic.

The Indian table tennis player was the second to win a medal in the Tokyo Paralympics 2020. She clinched the silver medal by beating Brazil’s Joyce de Oliveira, champion Borislava Rankovic Peric of Serbia and China’s Zhang Miao. In the gold medal match, the para-athlete lost to Zhou Ying, who scored 7-11, 5-11, 6-11.

Bhavina has won several gold and silver medals in national and international competitions, including International Table Tennis Federation Asian Para Table Tennis Championship. Bhavina was only 12 months old when she was diagnosed with polio, the resolute girl still went ahead to make the country proud!

The 21-year-old Nishad Kumar recreated his personal best with a 2.06m jump and claimed the silver medal in the men’s high jump T47 event at the Tokyo Paralympics. In the gold medal match, he lost to USA’s Roderick Townsend-Roberts who won gold by creating a world record of 2.15m jump. Nishad settled for silver with America’s Dallas Wise.

The para-athlete struggled to qualify in the Tokyo 2020 Paralympic Games, as he got COVID positive a couple of months back. However, he did not lose hope! On qualifying he gave his best performance in the Paralympics!

Yogesh Kathuniya clinched the silver medal with his best throw of 44.58m in the men’s discus throw F56 class. The 24-old Kathuniya lost the gold medal to Brazil’s Claudiney Batista dos Santos who made a record of 45.59m.

Yogesh started in para-sports in 2017, and in the following year, he made the world record in the F36 category with the throw of 45.18 m at the 2018 World Para Athletics European Championships in Berlin. Yogesh has Guillain-Barre syndrome (a neurological disorder) along with consequent quadriparesis that confined him to a wheelchair in 2016.

Like previous Paralympics held in 2004, and 2016, this year too Devendra Jhajharia won a medal in Javelin Throw. This time he created a new world record of 64.35m in the finals but lost to Sri Lanka’s Dinesh Herath, who made a throw of 67.79m in the gold medal match.

Mariyappan Thangavelu is yet another Paralympic player who has several medals to his credit. He cleared the 1.83m and 1.86m mark in three attempts and secured a silver medal. USA’s Sam Grewe created a 1.88m in his third medal and won the gold.

He won gold for Indian in the 2016 Summer Paralympics games held in Rio de Janeiro in the men’s high jump T-42 category. He is also the recipient of Major Dhyan Chand Khel Ratna (2020).

The debutant, Praveen Kumar, sealed a silver medal at the Tokyo Paralympics in the men’s high jump T64 class. He cleared 2.07m in the final, which is also his personal best and latest Asian record. It was world champion Jonathan Broom-Edwards of Great Britain who surpassed his record by clearing 2.07m in the finale and took the gold medal.

Suhas added another medal to India’s haul at Tokyo Paralympics 2020. He secured a silver medal in the men’s singles badminton SL4 event. Only Lucas Mazur of France defeated him in the gold medal match.

Suhas is an IAS officer and is a District Magistrate in Noida. He was the first Indian bureaucrat to win a professional International Badminton Championship at Asian Para-Badminton Championships, Beijing, China, in 2016. He secured a gold medal, and since then, he has laurels to the country in various global championships.

Singaraja Adhana bagged a silver medal in the Mixed 50m pistol SH1 with an effort of 216.7. Not just this, the 26-year old has also won a bronze medal in the Men’s P1 10 metre air pistol SH1 at the 2020 Summer Paralympics, with which he has entered in the list of Indians who have won a number of medals in the same edition of the Games.

There couldn’t be anything better than winning two medals in Javelin Throw. Devendra Jhajharia secured a silver medal for him, and the bronze medal was sealed by the Sundar Singh Gurjar. He threw 64.01m, making his season-best to win the medal at Tokyo 2020 Summer Paralympic Games. In 2015, Gurjar met with an accident that resulted in the amputation of their left-hand wrist; since then, he has been competing in the F-46 javelin throw category.

Not one, Singhraj secured two medals in the Tokyo 2020 Paralympic Games. Besides a silver medal in the Mixed 50m pistol SH1, he also won a bronze medal in the Men’s P1 10 metre air pistol SH1, bringing multiple laurels to the country.

Sharad Kumar brought pride to the country with a bronze medal that he won on a jumping jump of 1.83m.

In 2010, Sharad marked his international debut at the Asian Para Games in Guangzhou 2010. In 2021, he bagged the No.1 rank jump of 1.75m at the Malaysian Open Para-athletics championship. After a long sabbatical, he made a comeback in 2014, at the 2014 Para Asian Games, where he clinched the maiden title.

Avani Lekhara is amongst the Indian athletes who have secured multiple medals in the same edition of games. Besides securing a gold medal, she won a bronze medal in the same category. Avani shot 445.9 in the final match settled for a bronze in the women’s 50m rifle three positions SH1 category.

Harvinder Singh is the first Indian player to win a medal in Archery at the Paralympics. In initial rounds, the 30-year-old archer defeated South Korea’s Kim Min Su 6-5, Stefano Trevisani, RPC’s Bato Tsydendorzhiev and Germany’s Maik Szarszewski. Though he lost gold to USA’s Kevin Mather in the semi-finals but created history in Tokyo 2020 Paralympic Games.

The ace shuttler got India another medal in Badminton. He finished behind Pramod Bhagat in Group A to make in the semi-finals, where he lost to Daniel Bethell, who bagged the silver medal. In the Bronze playoff, he defeated Japan’s Daisuke Fujihara 22-20, 21-13 and secured a bronze medal.

With 19 medals in total, India has created history in Tokyo 2020 Paralympic Games. Let’s take a moment and acknowledge the hard work of all the Paralympic players. Congratulating each medal winner and wishing them good luck for their upcoming national and international events.