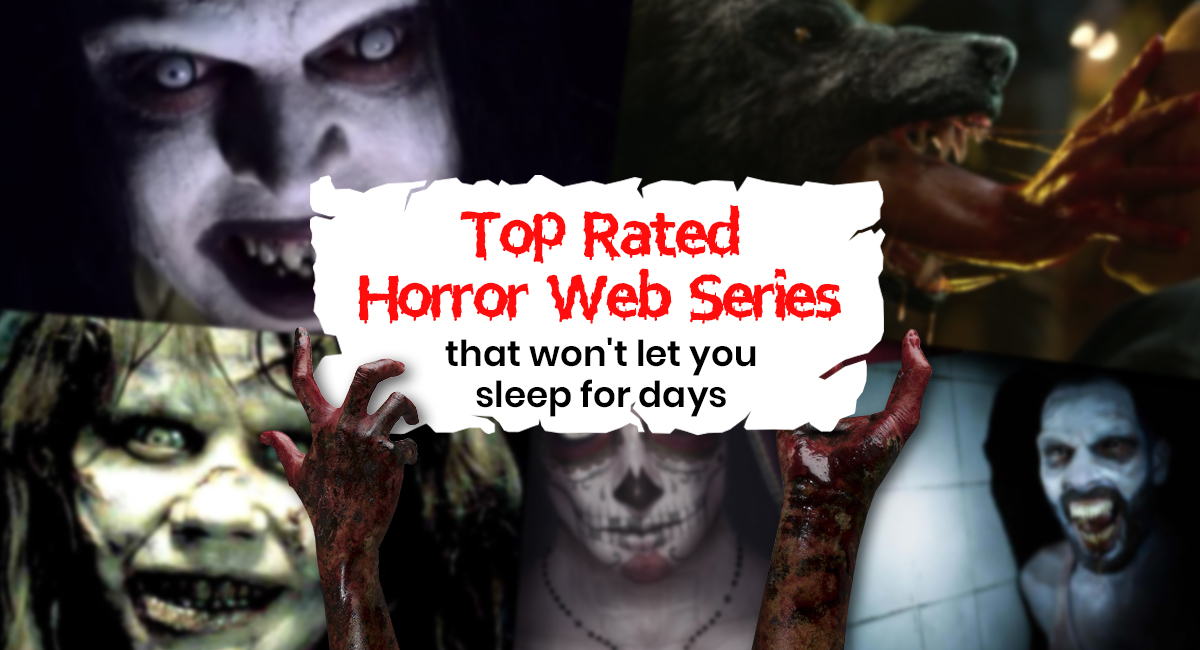 Ever since digital platforms like Netflix, Amazon Prime, and Disney+Hotstar were introduced, there has been no dearth of quality content. These platforms have an array of web series that includes different genres, including horror.

In case you are looking for spine-chilling content, you are at the right place. Here we have curated 15 top horror web series lists that you can consider to binge-watch on upcoming weekends.

Another name on the latest horror web series list is ‘Happiness.’ It is a thriller story which happens in a time in which contagious diseases have become the new norm.

We can’t skip about ‘Wednesday’ if talking about the scariest web series. This upcoming best haunted web series relies on a character Wednesday Addams of The Addams Family. She tries to gain expertise in her psychic abilities and work out the riddle that entangled her parents. The series was produced by MGM Television and is going to get released at the end of 2022 on Netflix.

The TV series is one of the latest names in the Horror web series list. It was premiered in 2021. The story revolves around a girl whose brother is a convicted terrorist. She joined the investigation of strange videotapes recordings of serial killings.

Resident Evil is an American horror mystery web series produced by Andrew Dabb. It is similar to Capcom, a video game series. The story tells that even after three decades of the uncovering of the T-virus, a breakout discloses the Umbrella Corporation’s dark secrets.

Stranger Things is a Netflix original drama that has canters on the life of the Joyce Byers and the ordeals she faces while searching for a 12-year-old son. This fiction received applause from the critics and is one of the top horror web series. The fourth season of this TV series aired in July 2022, and its final season was renewed in February 2022.

Twin Peaks revolves around the investigation that takes place by FBI Special Agent in a fictional town called Twin Peaks. The narrative features eccentric characters that unfold supernatural elements. It is one of the best horror web series by far. Though the first season of this show was premiered by ABC but, its third season was released by Showtime in May 2017.

Black Mirror is a British science-fiction anthology television series. The story of the web series revolves around a group of people and how technology manipulates their way of living and behavior.

8. The Haunting of Hill House

Next on the Hollywood horror web series list is The Haunting of Hill House. It is an American Anthology and supernatural drama web television series, directed by Mike Flanagan for Netflix. The first series is based on the 1959 novel of the same name, which was written by Shirley Jackson. The web series was critically acclaimed for its acting, production, and direction values, and it was named ”Effective Ghost Story. The second series is loosely based on the Turn of the Screw by Henry James.

Available On – Netflix and Disney +Hotstar

The TV series revolves around a group of survivors that travel to save themselves from zombie apocalypse that tends to spread in the USA. It’s a battle between humans and zombies. The series will keep you on the edge of the seat, and once you got the hold of it, you would have another season to explore. The eleventh and last season of this top-rated horror web series was telecasted in August 2021.

Bates Motel is an American Horror drama TV series, a prequel to 1960 film Psycho, which was based on Robert Bloch’s 1959 novel of the same name. The series is based on the lives of Norman Bates and his mother, Norma. Norman Bates’s life takes a turn when his mental health deteriorates, and his mother asks the priest for help.

This Horror thriller web series focuses on the literature’s most terrifying characters, which include Dr. Frankenstein and his monster Dorian Gray along with famous characters from the ”Dracula” novel. It is a psychological thriller with suspense and dark thriller intact.

Available on – Disney+Hotstar and Netflix

Produced by Jeremy Slater for Fox under The Exorcist franchise, the TV series is one of the best horror thriller web series. It is the sequel to the 1973 movie with the same name. The first season was premiered in 2016, and the second was launched in 2017. Both seasons have ten episodes. The Exorcist boasts a tense narrative that manages some legitimate scares with credible special effects

You may also like: Top-Rated ALTBalaji Shows to Watch for Free Online

The Haunting Hour is one of the best horror web series of all time. Canadian-American original horror fantasy, based on the 2007 movie R.L Stine’s The Haunting Hour: Don’t Think About. R.L. Stine guided youngsters on a creepy tour of tales that features life-sized dolls, carnivals clowns, and werewolves.

American Horror Story is an anthology of stories that includes the store of the house with deadly secrets, a frenzied asylum, a witch coven, a haunted farmhouse, an unusual show, an apocalypse, a cult, and a slasher summer camp. It is one of the best horror web series and received critical acclaim for its performances.

Dead Set is a British Television horror TV series which takes place in the TV reality show Big Brother, where contestants are surprised by Zombie. They create havoc for the housemates and production team. This is one of the best horror web series in English.

Gehraiyaan is an Indian web series that surrounds a girl who shifts to Mumbai after a leading traumatic life. As the girl starts her new life, she discovers paranormal and strange activities around her.

Created by Carlton Cuse, The Returned is an American supernatural drama series. It centers on the residents living in a small town, and their lives are disrupted when people who have been dead start coming back.

The American TV series canters around Hemlock Grove, a fictional town in Pennsylvania. The town witnessed strange happenings. The series will take you through the secrets and how the life of people in the small town is hampered.

Ghoul is an Indian horror web television miniseries which is based on the Arab folklore monster called Ghaul. It is a second original Netflix web series from India. The store of the series is based on the dystopian future.

This was our list of top-rated Hollywood horror web series for all the people out there who are great fans of the horror genre. Do tell us which is your favorite horror thriller web series?