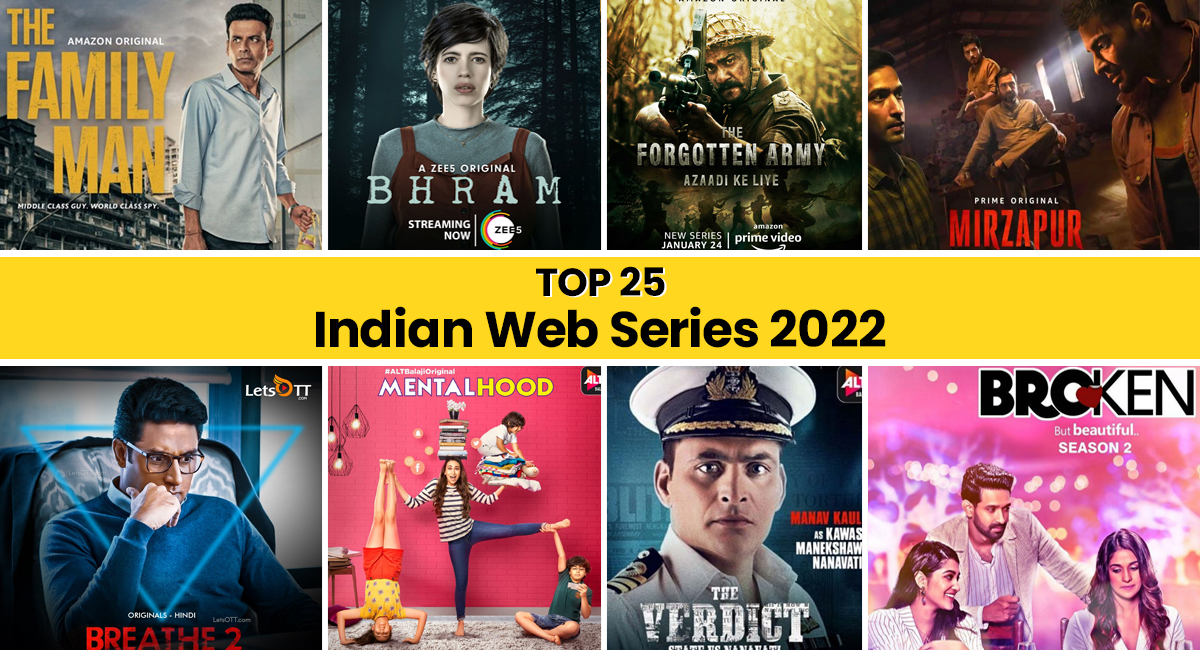 Web series are becoming more popular than typical Indian shows, all thanks to (over-the-top) OTT streaming platforms. These online streaming platforms are the primary source from where one can access mind-boggling web series. Various reasons make these series more popular than typical Indian television shows. Usually, a web series doesn’t have many episodes which mean you can binge-watch it. They are not like daily soap dramas and offer quality content to viewers. Every month you will get a variety of content to see, from crime thrillers to love relationships.

Web series like Sacred Games, Mirzapur, Delhi Crime, and many more are some of the popular names in the Indian web series list 2023. These are some of the most-watched and much awaited-series that made people believe that good content exists. All thanks to OTT platforms like Amazon Prime, Netflix, and others that have been giving us such amazing web shows. Read more to know the top 20 web series in India that you should watch.

The Indian web series ‘Scam’ is all about the considerable crimes that happened in the country and are known to be as the some of the most blatant scandals of India. The story  is picturised during the 1980’s and 1990’s Bombay and revolves around the life of Harshad Mehta who is the most notorious ‘Bachchan of BSE’. It shows Harshad being grown from poverty to great wealth till the moment when financial journalist Sucheta Dalal bring to light Harshad as the person behind the country’s huge financial scam. It is truly one of the leading names in the Indian web series list 2023.

Aspirants is one of the top Indian web series which tells the story of three friends – SK, Abhilash, and Guri. The drama series shows the journey of these three friends who are making preparation for the UPSC exam in the Old Rajinder Nagar of Delhi.

It is the story of four young entrepreneurs who left their day jobs to follow their dream of beginning their new venture. The startup journey is not as simple as it sounds and the whole series shows the trials and tribulations regarding the same. Watch this most-rated web series of 2015.

This new web series is made on the lives of well-known physicists Homi J. Bhabha and Vikram Sarabhai. It shows the story revolving around 1940 to the 1960s in Indian history and how the country accelerated toward a powerful and free nation. The series also shows the strong friendship, sacrifice, and willpower of these two extraordinary men and how they made up to launch India’s first-ever rocket.

In the Indian web series list, Permanent Roommates is occupying at one of the top positions. It has come up with two seasons now of which the latest one came in 2016. It is a romantic comedy web series telling the story of two young people Tanya and Mikesh who are in a long-distance committed relationship for a period three years and are now facing the prospect of marriage.

If you love comedy, action, thrill, and suspense, this should be your first pick to watch. It is a story of a common man that manages his family and work life together. (Shrikant) Manoj Vajpayee is an intelligence officer for the T.A.S.C., a sub-branch of N.I.A. One of the funniest things is that his family thinks that he is an ordinary government employee that does only paperwork in the office. The story has many twists that make it one of the best Indian web series of 2021.

It is a psychological horror/thriller and a unique concept. Bhram is the story of Alisha Khanna, who suffers from P.T.S.D. and experiences paranormal, mythical, and psychological activities. If you love suspense and mystery, then you should watch this piece.

If you love the acting and drama of Emraan Hashmi, then you surely love this Indian web series. It is a thriller series with so many twists and plots. The story revolves around three Indian intelligence officers, who are on a mission to free the Indian hostage agents. Bard of Blood is a complete pack of action, thrill, love, and war. It is one of the best Hindi shows on Netflix.

If you have ever fallen in love, you will surely love this series. The story is about a teenage romance that revolves around their tuition classes. It is the story of the love of Rajat, Ishita, and their best friends Ansuha and Pandey. After watching this one of the top web series, you will surely love your chemistry subject.

It is inspired by a British television drama series written by Peter Moffat, and in a short duration, it has become one of the best web series in India. The Indian version of the series will show good drama and thrill. The story revolves around Aditya, who found the dead body of his passenger in a pool. It has only one season with ten episodes.

Sacred Games is one of the most-watched web series in India which is nominated for Emmy awards. The series is based on Vikram Chandra’s novel Sacred Games. The story has so many plots and twists. It revolves around two characters Sartaj Singh and gangster Ganesh Gaitonde. It is directed by Anurag Kashyap and Neeraj Ghaywan, some of the finest directors in the industry.

This top Indian series is a spy thriller inspired by some of the real events in India. The story revolves around lead character Himmat Singh who works in the research and analysis wing. He tracks terrorist attacks and tries to stop them; the story has multiple twists worth watching.

Kota Factory is one of the finest pieces of art created for the T.V.F. by director Raghav Subbu. Every single moment of the show is worth watching. It is based on the student life of India’s hub for I.I.T. coaching, Kota. The creator tries to change the perspective on the life of students in Kota. It is the only black-and-white web series in India.

This one is also top-rated Indian web series of romantic dramas based on the life of two people. The story is about how the character breaks their fetters. Even the music of the web series got immensely popular. The piece was created by some of the industry’s big names Vishal Mishra, Akhil Sachdeva, Amaal Mallik, and Sandman. This is definitely one of the best Indian web series that you must watch.

Paatal Lok is one of the best police thrillers and Indian web series that you should not miss. The story revolves around a police inspector’s investigation of a fake murder mystery. Its concept is based on Svarga, Dharti, and Paatal. The series got immensely popular because of its characters like “Hatoda Tyagi.” The story is written by four talented writers Sudip Sharma, Sagar Haveli, Hardik Mehta, and Gunjit Chopra.

The show is centered on two chefs who are known for their love relationship but got separated. The story is about their love, food, struggle, and heartbreak. It is one of the top-rated Alt Balaji shows. It also premiers on Zee5. If you love to watch drama and romance, then this shows the best blend of both.

If you are waiting for a crime thriller, then Asur is one of the best Indian web series to watch. The show is about finding a serial killer with so many twists and plots. Its story has a strong base from Varanasi that unfolds so much suspense. Overall it is the right combination of mythology, mystery, and action. Asur premiered on one of the free live apps.

It is one of the best sport drama thrillers that involve various aspects of cricket. The story revolves around a cricket team. It has several twists with spot-fixing and conflicting interests. You will get to see the fight for money and power that just goes from one to another hand.

The story is set in the ’90s when our country was fighting for Independence. It is based on real events that took place in Indian history. Indian soldiers marched to Delhi with a war slogan of “Chalo Dilli” to free the country from rulers. The series shows the struggle and sacrifices of the lives of soldiers. This series is directed by Kabir khan and is one of the top-rated Indian web series.

It is one of the best Indian comedy shows that you should watch for complete entertainment. This is the story of an engineer who is appointed as a Panchayat secretary of Phulera village. It is the struggle of a city boy in a village that struggles to get out of the scenario every time but gets trapped.

It is also an Indian crime drama show, which is inspired by the Dutch drama series Penoza. The show was released on 19th June 2020 and received so much love from the public. Its story focuses on various aspects of our everyday life, and primarily shows the lousy face of our society.

Another crime drama that will give you Goosebumps with its compelling story and acting is Delhi Crime. The main story is based on the Delhi gang rape of 2012. You will get to know insight into the case and the struggle of police to track down the culprits. It is a power pack show that will leave you thinking about the reality of our world. Do watch this one of the famous Indian web series.

Next on our list of top Indian web series is Breathe Season 2. No doubt its first season was worth watching. It is a story of a desperate father who had to save his son; the series is based on father-son love. The series increases suspense with a statement of how far will you go to protect the one you love.

24. Baahubali: Before the Beginning

This web television series is a prequel to Baahubali. It shows the rise of Sivagami. A lady who solely controlled and managed the entire empire and was known for her justice. It is the story of how she became the queen of the empire and all the challenges she faced in her rise.

Season 1 of the web series was a huge success, and everyone is eagerly waiting for season two. It is a story of power, money, crime, and drama; you will get everything in this power pack series. Meanwhile, if you haven’t watched season 1 yet, then you should watch it.

Here we have listed some of the best Indian web series to watch. This content will surely make you astounded with its quality. Web series are a new way of getting entertained just sitting at your home. You can binge-watch shows, or if you missed something, watch it as often as you want. Explore the complete and note down your picks to watch this weekend.