Best Bollywood Thriller Movies That Will Keep You Hooked to Screen 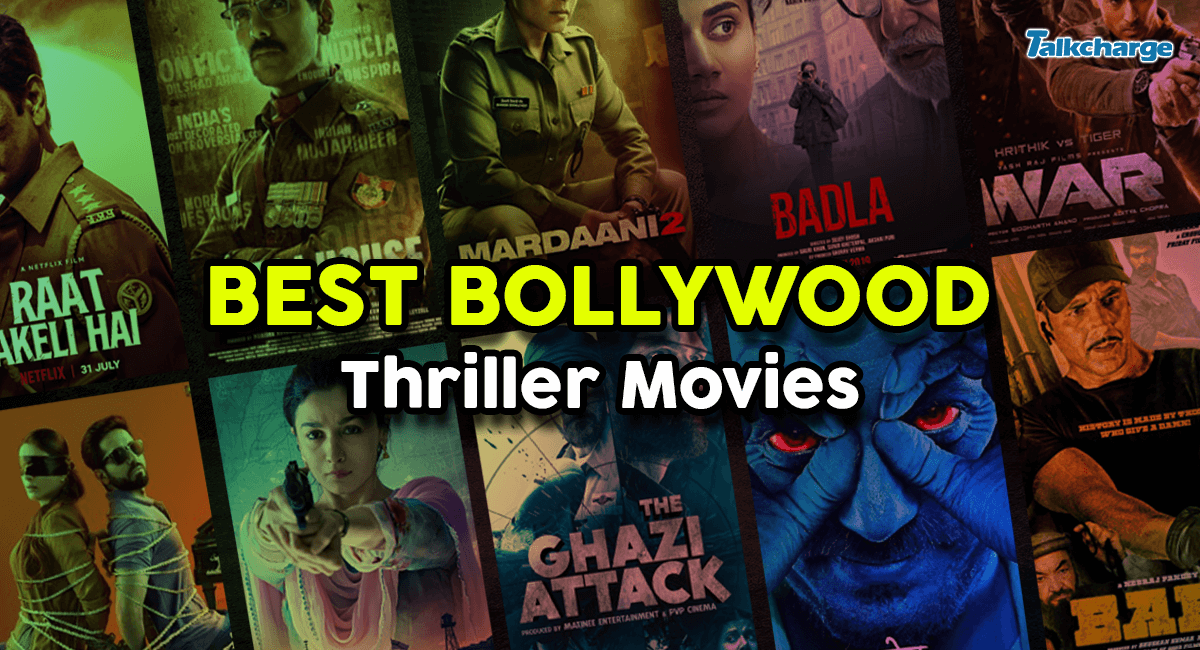 While Bollywood is famous across the globe for its Romantic and action-packed movies, other genres like suspense thrillers are also gradually making the pace. All thanks to the legendry directors like Sujoy Ghosh, Sriram Raghavan, Anurag Kashyap and Neeraj Pandey, who have carved their niche in this genre, making it popular amongst the audience. These directors effortlessly showcase their story in the most intriguing manner that would want you to know what is going to happen next. Also, let’s applaud the powerful performance of the actors who make the narrative so real that we as the audience are transported to another world for once.  Though the list of thrillers is endless, here we have curated some of the best Bollywood thriller movies that would keep you on the edge of the seat till the end.

With Nawazuddin Siddiqui and Tigmanshu Dhulia in the star cast, you can surely expect a riveting thriller. With the backdrop of UP, Raat Akeli Hai dwells into a murder investigation!  Jatil Yadav (Nawazuddin Siddiqui) is summoned to investigate a murder case. While discovering the real murderer, Jatin falls in love with the deceased wife. The desire to know the truth forms the crux of the crime thriller. Undoubtedly, this is one of the best Bollywood thriller movies to watch.

This action thriller is inspired by the real Batla House encounter case that took place on 19 September 2008. The movie has John Abraham as Sanjeev Kumar Yadav in the titular role. He is a police officer who plays an important role in the encounter. The film highlights the officer’s struggle to catch the escapees while dealing with posttraumatic stress disorder. It is one of the best Bollywood thriller movies released in recent years. The story of the movie will keep you on the edge of your seat, waiting for what will happen in the climax. Besides excellent acting by John Abraham, Mrunal Thakur’s performance is also a delight to watch!

Mardaani 2 is a story of an intelligent and smart ‘’woman cop’’ who is expected to be poised and demeanour! IPS officer Shivani Shivaji Roy (Rani Mukerji) leaves no stones unturned to find the real culprit behind a murder, who is a psychopath and does not like women with minds and voices. While solving the case, she overcomes many ordeals that turn her into a stronger and determined cop.

Mardani 2 is the sequel to 2014 released Mardaani, which also had Rani Mukerji in the pivotal role. The movie beautifully addresses some of the existing social issues like gender equality and much more. Like its forerunner, Mardaani 2 is a fast-paced cop-on-a-mission thriller that wills surely woe your mind.

With the ace actors like Amitabh Bachchan and Taapsee Pannu, you cannot think of even a single dull scene in the movie and if you do not agree with us, 2016 released Pink would surely suffice it.

This mystery thriller revolves around Naina Sethi (Taapsee Pannu), who is accused of killing her former boyfriend. His lawyer, Badal Gupta (Amitabh Bachchan), is her only hope who can save her in the case. The movie is a remake of the Spanish film The Invisible Guest. Badla will surely keep you glued to the screens thinking of what will happen next, which makes it one of the best suspense thriller movies of Bollywood. Subscribe to Netflix if you have not yet and find out the real culprit in the movie.

With an ensemble star cast including one of the handsome men in this world-Hrithik Roshan, and engaging, action-packed scenes, War is a must-watch Bollywood thriller movie. The movie opens with Kabir (Hrithik Roshan), a rogue agent, killing a noted person. After a series of flashbacks, the audience gets to know that Khalid (Tiger Shroff) worships Kabir and has worked with him in the same unit of the intelligence agency. The story of the film takes an interesting turn when Khalid is asked to find and arrest Kabir. The camaraderie of both the key actors is a delight to watch. War will keep you hooked to your screen while surprising you till the end.

Undoubtedly, one of the most amazing Hindi thriller movies, Andhadhun, will keep you on your toes and force you to guess all the way. Loosely inspired by the French short film L’Accordeur or The Piano Tuner (2010) by Olivier Trainer, Andhadhun is a story of a blind pianist. The movie was applauded for its masterfully crafted narrative and screenplay. This is indeed one of the best of Ayushmann Khurrana’s movies. If you haven’t watched it yet! Do watch it at Jio Cinema.

Based on the real-life story, Raazi is amongst the highest-grossing movies of the country with a female protagonist. Indian Muslim girl Sehmat (Alia Bhatt) is asked by her father to marry Pakistani Army officer Iqbal Sye (Vicky Kaushal) in order to get all the useful details before the Indo-Pakistani War of 1971. Unlike classic spy thrillers that have power-packed action sequences, Raazi gradually ramps up the tension, giving way to the explosive final act. The movie will also leave you questioning the repercussions of the war on the human psyche. In all, it is one of the breakthrough Bollywood Thriller movies that one should not miss.

Gazi Attacks is India’s first war-at-sea film, based on real-life events. The movie explores the mysterious events that led to the sinking of the PNS Ghazi during the Indo-Pakistani War of 1971.

The Ghazi Attack, an underwater chase thriller, dives deep for patriotism. The second half of the movie will keep you on the edge of your seat as the underwater thriller moves ahead.

Raman Raghav 2.0 or Psycho Raman is a suspenseful psychological thriller. It embraces eight chapters that are loosely inspired by the Mumbai based real-life killer Raman Raghav. It is a story of a psychopath (Nawazuddin Siddiqui) and a cop Vicky Kaushal who struggles hard to catch the criminal.

Unlike most Bollywood movies, the policeman itself is corrupted and leads an abusive relationship with his partner. That’s not all!  The movie has a reserved number of suspense that would surprise you and make you overthink about its end. While both the actors have done their job well, it is Nawazuddin Siddiqui’s award-winning performance that added life to the entire narrative! This is indeed one of the best Bollywood thriller movies that too with the on-point star cast.

With the gripping storyline and suspense throughout the movie, Akshay Kumar starrer Baby is one of the top-rated Hindi thriller movies. Baby is about the temporary task force, led by TS chief Feroze Ali Khan (Danny Denzongpa), which is constantly on a mission to fight with a terrorist.  Amongst them, Ajay Singh Rajput (Akshay Kumar) is the best performer, and thus, he is sent to a new dreadful mission which later becomes the crux of the movie. Besides Akshay Kumar, the film has Anupam Kher, Danny Denzongpa, Rana Daggubati and Taapsee Pannu in supporting roles.

NH10 is an all-in-all woman-oriented movie! It is the answer to those who find women any less than men. With the path-breaking performance, this is one of the best of Anushka Sharma’s movies. The movie concentrates on Meera (Anushka Sharma) and her husband, Arjun Neil Bhoopalam, who embarks on the road trip when they experience honour killing.

The couple tries to lend help to Pinky and her husband, who are on the verge to be killed by Pinky’s family. Unfortunately, they could not save Pinky and her husband; instead, they get trapped in the family drama. After fighting all the odds, Meera successfully runs away; however, she finds the dead body of Arjun. She comes back to avenge his murderers. The movie will shake your senses, keeping your eyes glued to the screen till the end.

2nd October is etched into many minds not just because it is celebrated as Gandhi Jayanti. It is also the same day when Vijay Salgaonkar, along with his family, “attended” Swami Chinmayananda’s Satsang in Panaji, Goa. Over the years, Drishyam has become one of the cult Hindi thriller movies. The movie concentrates on the father/family man – Vijay Salgaonkar (Ajay Devgn), who can go at any length to save his family. The movie also has actress Tabu IGP Meera Deshmukh, who is on the hunt for her son. Her son- Salgaonkar, killed Sam in order to save his daughter when he wanted to take sexual favour from his daughter Anju. Drishyam is an all in one crime-drama-thriller for a reason! Do watch out for this movie on Disney + Hotstar with your family.

Based on the real-life events, Special 26 is a Bollywood Heist film with feisty heroes acting as a CBI team. The team is led by Aju (Akshay Kumar) and an older man called Sharma-Ji (Anupam Kher), who, along with their teammates, robe several businessmen and politicians and seamlessly run away without being caught even once.

Later, the real and honest police office, Waseem Khan (Manoj Bajpayee), determines to apprehend the team of con men. He sets up his master plan to catch them red headedly but he himself gets caught in their trap. Unlike the regular chor-police drama, the director, Neeraj Pandey, has weaved an intelligent and mind racing thriller that will keep you tightly strapped to your seats till the end.

Vidya Balan starrer Kahaani showcases the struggles and pain of a pregnant woman Vidya Bagchi who visits Kolkata in search of her missing husband, Arnab Bagchi.  The whodunit setting remains constant in the movie, keeping the audience on the edge of their seat.

The suspense drama made a captivating balance between realism and courting realism as it has a lot more than a regular thriller. Nothing in the movie was clear until the climax, making it one of the finest Bollywood thrillers of all time. The movie won a number of accolades, including three National Film Awards and five Filmfare Awards. It also has a sequel Kahaani-2 Durga Rani Singh, which was realised in 2016.

Revered as the finest Bollywood Thriller movie, a Wednesday is a smart diatribe against terrorism. Made on a small budget, the story of the movie speaks the volume! The film begins with Prakash Rathod (Anupam Kher), a retired police commissioner, remembering one of the most notable cases of his career. He came to know about the same from a commoner (Naseeruddin Shah). What happens next makes captivating suspense drama that would make you watch the entire movie.

From movies like Kahaani, Andhadhun, and Badla to classics like Jewel Thief, Baazigar, Mohra, they have one thing in common: These Hindi movies have seamlessly defined thrillers genre. We hope with new directors we get to see more variety of suspense dramas. Do let’s know which is your favourite Hindi thriller movie.