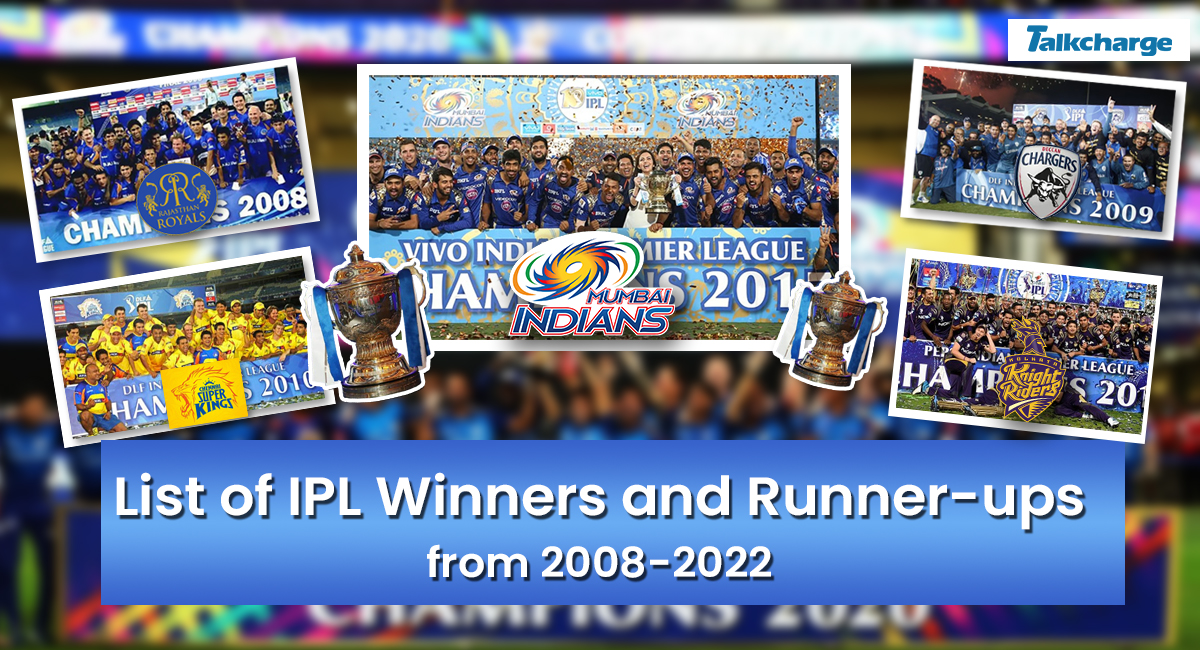 Founded in the year 2007 by, Lalit Modi who was also a member of the Board of Control for Cricket in India (BCCI), the Indian Premier League is a Twenty20 cricket league that is hosted by India. Lalit Modi was a part of the tournament for three years 2008- 2010. IPL completed 14 editions in 2021, with Chennai Super Kings as the winner. Most of the IPL tournaments are hosted in India. However, there have been a few years like 2020 and 2021 when IPL was played in a foreign country (Dubai) due to the ongoing COVID Pandemic.

In the year 2008, IPL started with eight teams. Over the years, the number of participating teams has been varying.  The 2011 edition saw participation from a maximum number of teams, which is 10 teams. The latest edition in 2020 featured 8 teams namely, Chennai Super Kings, Delhi Capitals, Kings XI Punjab., Kolkata Knight Riders, Mumbai Indians, Rajasthan Royals, Royal Challengers Bangalore, and Sunrisers Hyderabad. Amongst these, Mumbai Indians have emerged victorious five times which is the maximum number followed by CSK, who have won 4 times and KKR has won the maiden title 2 times. Scroll down to know the IPL winners list all season with captain names, best players, and winning scores.

List of IPL Winners Year Wise Along with Winning Score

The latest season of the Indian Premier League or IPL 15 took place from March 26,2022 to May 29,2022. The host of the tournament was Mumbai and Pune. The season saw ten teams defending each other in which Gujarat Titans were the champions. The winning team defeated Rajasthan Royals by 7 wickets and won their first IPL trophy.

Maximum Runs Made By: Jos Buttler

Coach of the Team: Ashish Nehra

Prize Money: ₹ 20 crore prize money and trophy to the winning team and ₹ 13 crores and a runners-up trophy

Chennai Super Kings (CSK) won the Indian Premier League 2021 title after beating KKR by 27 runs. With their latest win, CSK has become 2nd team after Mumbai Indians to win maximum IPL. They have won the maiden titles 4 times, all the under the captaincy of MS Dhoni.

The 2021 IPL winner i.e. CSK was the first team to qualify for the finals and KKR was behind the table-toppers in the group stage. Ruturaj Gaikwad and Faf du Plessis have shouldered the CSK batting unit in IPL 2021. Both the players stitched fifty-plus stands in the finale of the 14th edition of IPL and increased the chances of the team winning the season.

Coach of the Team: Stephen Fleming

Prize Money: ₹ 20 crore prize money and trophy to the winning team and ₹ 12.50 crore and a runners-up trophy

The latest IPL Season 13 was won, yet again, by Mumbai Indians. The team has so far appeared 6 times in the final of the IPL tournament, out of which it has won 5 times, including two consecutive editions of the IPL. In IPL 13, Mumbai Indians defeated Delhi Capitals in the final match played on the 10th of November 2020 in Dubai.

Indian Premier League started on 23rd March and ended on 12th May 2019. The IPL 12 was hosted in India, and the final match was played at Rajiv Gandhi International Cricket Stadium in Hyderabad. Mumbai Indians took home IPL 12 trophy by defeating Chennai Super Kings by one run.

The next name in our IPL winners list till date is Chennai Super Kings. They won IPL 11 by routing Sunrisers Hyderabad by eight wickets. The season was held from 7th April to 27th May 2018. Kane Williamson was awarded the Orange Cap as he scored the highest runs and Andrew Tye won the purple cap.

Maximum Runs Made by: Ambati Rayudu (602)
Maximum Wickets Taken by: Shardul Thakur (16)
Coach of the Team: Michael Hussey
Prize Money: ₹ 20 crores to the winning team and ₹12.5 crores to the Runner-up team
Owner of the Team: India Cements

In the year 2017, Mumbai Indians were the first team in the Indian Premier League, which won more than two seasons of IPL. The final match was quite enthralling as the runner-up team, i.e., Rising Pune Supergiant, made 128 runs with six wickets, and MI made 129 runs with eight wickets, and the team won by one run.  In Vivo IPL Winners List 2017, David Warner won the Orange Cap, and Bhuvneshwar Kumar was given the purple cape for taking the maximum wickets.

Maximum Runs Made by: Parthiv Patel (395)
Maximum Wickets Taken by: Jasprit Bumrah (20)
Coach of the Team: Sachin Tendulkar
Prize Money: ₹15 crores to the winning team and ₹10 crores to runner up team
Owner of the Team: Mumbai Indians

Next on the IPL winners list is Sunrisers Hyderabad. The team won by eight runs, and Mustafizur was named the emerging player of the season. This was a breathtaking season owing to a marvelous performance by Virat Kohli – the current Indian Cricket Team captain with 973 runs under his belt in the season. Another distinguishing feature of IPL 9 was the introduction of LED stumps, which have become a norm since then.

Maximum Runs Made by: Lendl Simmons (540)
Maximum Wickets Taken by: Lasith Malinga (24)
Coach of the Team: Ricky Ponting
Prize Money: ₹15 crores to the winning team and ₹10 crores to runner up team
Owner of the Team: Reliance Industries

KKR won the final match of the 2014 edition of the Indian Premier League and made it to the list of IPL winners second time. The team led by Gautam Gambhir outshone all others. Another player that needs special mention is Manish Pandey, who helped the team to chase down a difficult target of 200 runs in the final. However, victory could not have been achieved without Robin Uthappa, the orange cap awardee of Pepsi IPL 2014.

This was the first time when the Mumbai Indians have crowned IPL champions. Surprisingly, it was Sachin Tendulkar’s last appearance in IPL. MI won by 23 runs as they made 148 runs with 9 wickets. The runner-up team- Chennai Super Kings could muster up only 125 runs with 9 wickets in 20 overs. The final match was hosted at Eden Gardens in Kolkata.

In 2008, it was the first time that KKR won the IPL. The team was led by Gautam Gambhir, having been at the helm since 2011. Kolkata Knight Riders went on to defeat Chennai Super Kings. In the same year, the team introduced a new logo and marketing, campaign-”New Dawn. New Knights’’.

Ten teams participated in the 7th edition of the IPL in 2011, amongst whom Chennai Super Kings took away the title for the consecutive time. The team played under the captaincy of MS Dhoni, then skipper of the Indian National Cricket team in both the longer and shorter formats of the game. In the same year, Super Kings became the first team to win IPL for the second time.

They set a humungous target of 206 for the Royal Challengers Bangalore, who simply could not measure up to it and lost by a huge margin of 58 runs. Also, in the same year, Chennai Super Kings became the first team to win all the matches played at its home ground, which is the famed M.A Chidambaram stadium of Chennai.

Total Matches of IPL4: 74
Coach of the Team: Stephen Fleming
Prize Money: ₹6 crores to the winning team and 3 crores to a runner-up team
Owner of the Team: India Cements

Chennai Super Kings won the 2010 edition of the IPL for the first time, having missed out on the debut edition in 2008. Chennai Super Kings achieved the feat by thrashing Mumbai Indians by 22 runs in the final match at the DY Patil stadium in Navi Mumbai. Pragyan Ojha won the purple cap, while the great Sachin Tendulkar won the orange cap for scoring the maximum number of runs.

The Deccan Chargers were based in Hyderabad and were one of the most expensive teams of the second edition of the IPL. After losing the championship in the year 2008, the team underwent a complete makeover. The team bested Royal Challengers Bangalore by six runs to win their maiden and only IPL trophy.

Rajasthan Royals were the first to make it to the list of IPL winners. RR won the final match against Chennai Super Kings by 3 wickets. The final was held at DY Patil Stadium in Navi Mumbai.

Indian Premier League (IPL) is the most-watched T20 league in the country, perhaps the world. IPL is hosted by India, and 8 to 10 teams, comprising some of the best cricketers from around the globe and new budding talent from India, compete against each other to win the championship each year. CSK is the winner of the latest edition of IPL 2021. It has been one of the dominant teams in the IPL, having won the trophy a maximum number of times after Mumbai Indians. Above, we have curated the IPL winners list along with additional facts including the prize money they have won and highlights of different editions of the IPL.

1. Who are the winners of IPL till now?

2. Which team won the most IPL matches?

3. How many times did KKR win IPL?

4. Who is the most successful captain in IPL?

Rohit Sharma of Mumbai Indians and MS Dhoni are the most successful captains of the IPL. MI has won 5 titles and CSK has won 4 titles.

5. Who is the highest Indian wicket-taker in a single season of IPL?

In IPL 2021, Harshal Patel of Royal Challengers Bangalore has taken the highest number of Indian wickets which is 32 wickets in the single edition.

Ravi Bishnoi (Punjab Kings) won the title of the catch of the season for taking Sunil Narine’s catch in Ahmedabad with a full-length dive at deep mid-wicket.

8. How many titles has CSK won?

The winner of IPL 2020 is Mumbai Indians.

Add Channel in Airtel DTH via SMS, My Airtel App & Online
Best Telugu Movies of Allu Arjun from 2003 to 2022