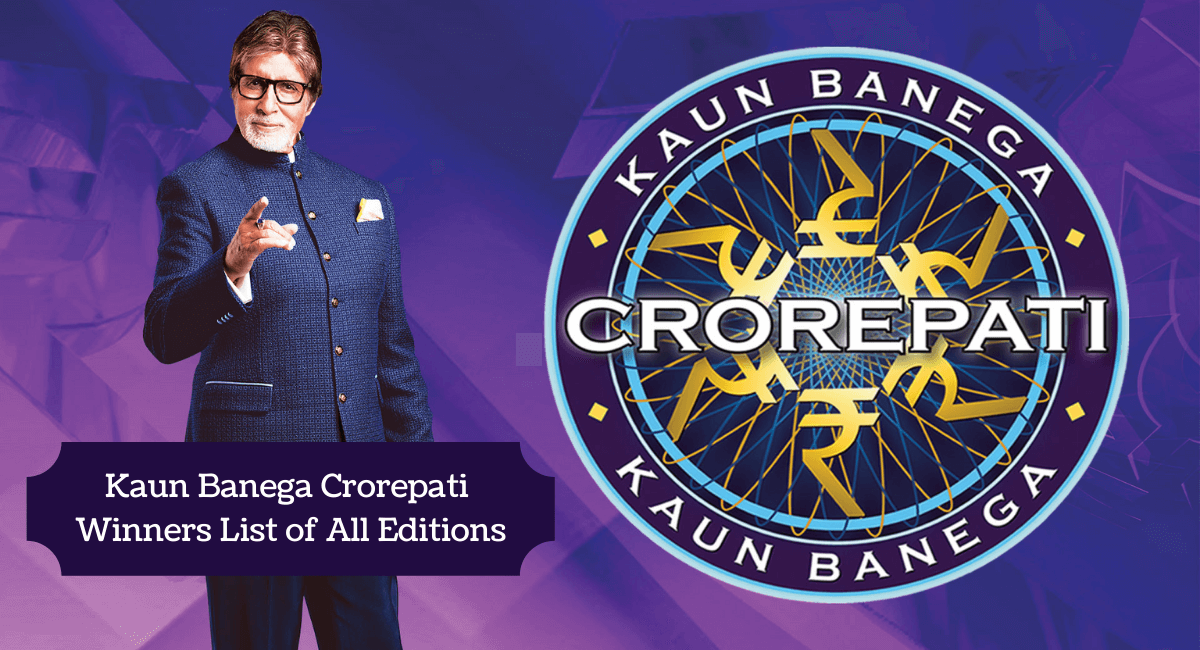 Kaun Banega Crorepati is counted among the most-watched reality shows on Indian Television. This is an Indian adaptation of the British reality show ‘Who Wants to Be a Millionaire?’ Presently 12th season of the show is live, and legendary actor Amitabh Bachchan is hosting it again with all his charm. With his famous lines “Deviyon aur sajjano, chaliye hum aur aap milkar khelte hain kaun banega karodpati” let’s start to read more about all the KBC winners list of 12 seasons.

All about KBC Winners of All Seasons

The first season of the show was aired in 2000, and since then, it has been completed 20 years. Among the entire Kaun Banega Crorepati winners list, the first one always holds a special place.

The first Crorepati in KBC was Harshwardhan Nawathe, who was a civil services aspirant at that time. His in-depth knowledge of various subjects made him answer all the questions without fail.

The deciding question for him was, “Among whom does the Indian Constitution permit to take part in the proceedings of parliament?” Of course, he got it right with the answer ‘Attorney General.’

He used the prize money to enroll in business school in the UK. Now he is married and working at the senior level of an MNC in Mumbai.

Kaun Banega Crorepati Dwitiya  or KBC season 2 was aired after a long gap of 5 years. After the successful season one, fans were impatiently waiting for the next season. Amitabh Bachchan again hosted this season with great zeal and excitement.

All the 62 episodes had interesting, witty questions which were bravely answered by the contestants. In this season, there were two KBC ₹ 1 crore winners. Firstly, Brajesh Dubey bagged the prize with his spot-on answers. He is an electrical engineer and son of former national hockey umpire K.Dubey.

This season had special episodes with celebrities for a philanthropist’s cause. The winner was Ajay and Kajol Devgn who has worked in romantic Bollywood Movies.  That’s the reason Kaun Banega Crorepati winner list includes their name.

3. No Winner Name for KBC Season 3

After two massively successful seasons of KBC, season 3 dropped down its popularity. The sole reason for that was the change of the host. Yes, Amitabh Bachchan could not host the show, and hence Shahrukh Khan was signed for the role.

However, the show was concluded way before than expected without qualifying anyone to the Kaun Banega Crorepati winners list.

In 2010, the show was aired with iconic Amitabh Bachchan with great energy. This season was also remarkable because it was the first time that a common woman won the game. Rahat Taslim was a homemaker who shocked the nation with her knowledge and presence, and wit.

With every “Agla prashn aapke computer screen par ye raha…” next question would pop up, and she answered the answers with grace. She also used the lifelines to continue playing.

She used the won cash to start her business and open a store in a nearby mall, Giridih, Jharkhand. Today she is happily running the business and remembers her day of victory that changed her life. With all her hard work and dedication she is rightful member of Kaun Banega Crorepati winner list.

The fifth season of KBC started with a bang with the announcement of ₹ 5 crores as the ultimate cash prize. Sushil Kumar was one of the contestants who entertained the audience with his laughter and words. He successfully answered all questions and made it to the list of Kaun Banega Crorepati winners list but wait, there was one last question worth ₹ 5 crore.

“Which colonial power ended its involvement in India by selling the rights of Nicobar Islands to the British on October 18, 1868?” this question made Sushil think to try it or not, but yes he did. He answered “Denmark” and Amitabh Bachchan’s famous line “Computerji is jawab ko lock kiya jay..” locked Sushil’s destiny.

And the audience jumped with him as Slumdog millionaire was happening in real. He won a massive amount of cash prize, which he further used to purchase land and start a cab business.

6. Winner of KBC 6: Raina and Sawhney

This is season saw two winners, namely, Manoj Kumar Raina and Sunmeet Kaur Sawhney. The story of Sunmeet Kaur connects the audience towards her which made her qualify for Kaun Banega Crorepati winner list. Let’s know more about her.

She was not allowed to participate in the game show, but he secretly applied for it, and her husband was the only one who supported her. One by one, she faced all the answers and didn’t hear and “Afsos, ye galat jawab hai” (oops! This is the wrong answer).

He became the first woman who won ₹ 5 crores. The question posed to her was, “Who is the first woman to successfully climb K2, the world’s second highest mountain peak?” And she answered ‘Wanda Rutkiewicz’, which is the correct answer. So we saw this tagline “Sirf Gyaan Hi Aapko Aapka Haq Dilata Hai” became real in her life.

Mr.Bachchan hosted this season again, and there were two winners in the season. Taj Mohammed Rangrez and Firoj Fatima took home ₹ 1 crore. The names in Kaun Banega Crorepati winners list will be there, but the lives that were changed through these shows are immeasurable.

KBC season 7 also witnessed a female winner, Firoj Fatima, who could pay off a huge loan for her father’s treatment. This fund also helped her to continue studying.

The show tagline “Seekhna Bandh Toh Jeetna Bandh” came true in the life of the winners. You can also read more motivational quotes.

This new season came up with a new format, but the same loved hosted Amitabh Bachchan. Three wise men and Code red were new lifelines introduced in the season. This edition was about to give us the Kaun Banega Crorepati 7 crore winner for the first time in history.

This time the Delhi brothers Achin and Sarthak Narula took the show off by becoming KBC 7 crore winners. Yes, they won the cash prize of ₹ 7 crores. This is the highest amount one has ever won on the entire list of winner of KBC 8. They used their prize money for their mother’s cancer treatment and for starting their own business.

KBC 9 showed a new format and some additional features like video calls for a phone-a-friend lifeline and Plus One lifeline.

For this season, another graceful lady made to the list Kaun Banega Crorepati winners list, Anamika Majumdar from Jamshedpur. She worked in an NGO and showed her passion for learning. If you, too, hold the passion for learning, go for online educational websites to grow your skill and knowledge.

The deciding question for her was,” Which of these artists was principally entrusted with the task of ‘illuminating’ the original document of the Constitution of India?” and she answered, “Nandlal Bose” and this become the moment she was declared KBC 9 winner.

KBC 10 winner was an Assamese woman, Binita Jain. She was a teacher in the coaching institute when she sat on the hot seat. Amitabh Bachchan handed over the cheque of  ₹ 1 crore and declared her winner in season 10 of KBC.

Binita uses the sum to secure the future of her kids. Recently she inaugurated a Dental clinic for her son in her hometown.  She has rightfully made her name to Kaun Banega Crorepati winner list in this season.

KBC 11 started KBC play along, which allowed the distant audience to participate in the live show. This was a great way to engage the people with the show. This season saw five winners, namely, Gautam Kumar Jha, Sanoj Raj, Mrs. Babita Tade, and Ajit Kumar. All of these players made it to the Kaun Banega Crorepati winners list and won ₹ 1 crore each.

This show was concluded in December 2019, and another Sony TV serial took over the prime slot. You can show the previous episodes in Live TV apps.

Season 12 of KBC was historic in itself, as it did not have only one crorepati but three crorepatis, that too all women! The first one was Nazia Nasim, from New Delhi. The second crorepati on KBC 12 was Mohita Sharma from Himachal Pradesh. And Anupa Das from Chhattisgarh became the third contestant to win the coveted winning amount of Rs 1 crore on KBC 12.

Himani Bundela is the first crorepati of Kaun Banega Crorepati’s Season 13 that started on 23rd August 2021.  The 25-year-old Himani hails from Agra and is a Math’s teacher by profession. Himani confidently gave the right answers to all the questions. However, she selected the wrong option in a seven crore question and settled for one crore as a winning amount. In 2011, Himani lost her vision to an accident when she was merely 15 years old. Her liveliness and die heart nature has helped her excel in all the endeavours which she has taken.

Sitting on the hot seat is no joke at all. The pressure and ambience are enough to make anyone nervous. Yet many contestants became millionaires after winning the game show. In this blog, I have compiled the Kaun Banega Crorepati winners list.

These winners are not merely overnight millionaires winning up to ₹7 cores but also showed that knowledge and learning never fails. So with “Samay Samapti Ki Ghoshna” we are ending this blog here. We hope you enjoyed reading this blog.

2. What are the four lifelines in KBC?

50:50, Phone-a-Friend, Audience Poll, and Switch the Question was the basic lifelines in KBC. Now there are few others like Double Dip, Pass, code red, etc.

3. What was the 7 crore question in KBC?

The question ‘who invented the first stock ticker in 1867?’ was posed to Babita Jain for ₹ 7 Crore. The right answer is Edward Calahan.

KBC is a short form of Kaun Banega Crorepati. This is an Indian adaption of the British TV show “Who wants to be a millionaire?”

5. How much does Amitabh Bachchan charge for KBC?

6. How much Sushil Kumar actually won?

Sushil Kumar won ₹ 5 core, but after deducting the tax, he got ₹ 3.6 crores in hand.

Narula Brothers were the winners of KBC season 8 with the highest cash prize of ₹ 7 crores.