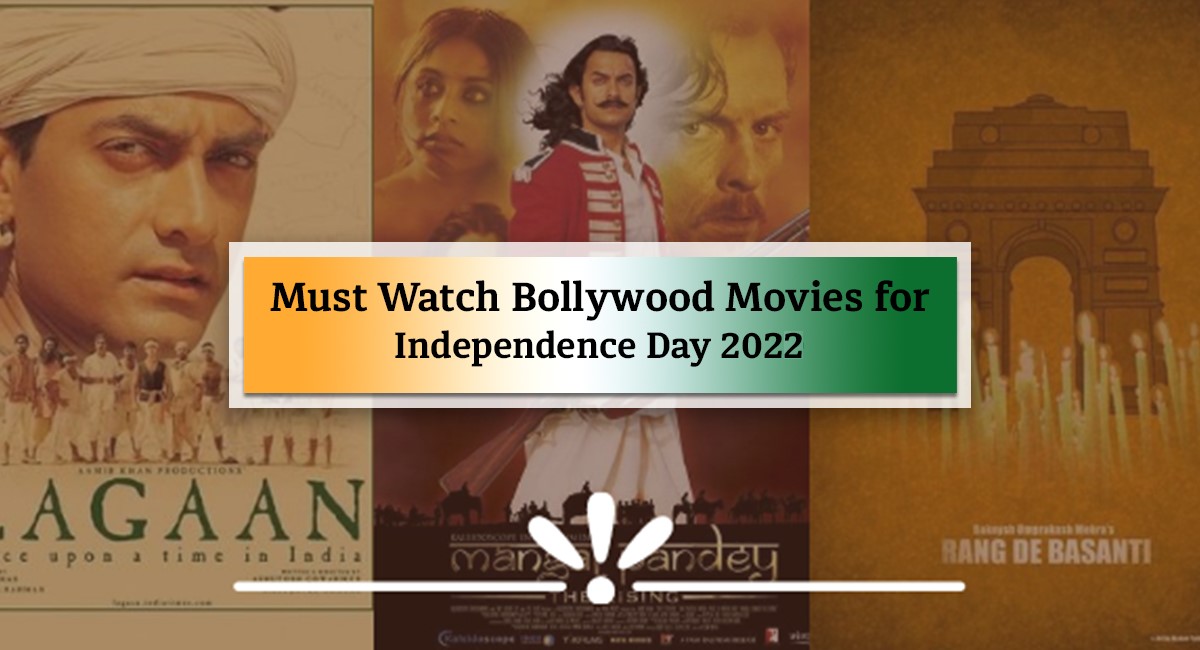 It’s been 73 years since we got our freedom from Britishers. Independence day is like a big festival in the life of Indians. The celebration of this occasion is so big that it involves several drills of the Indian Army. Now everyone plans something for this day, and if you are one of those who have no plans yet, then we have some suggestions for you. You can enjoy your day by watching some of the great patriotic movies for Independence Day. Netflix is one of the platforms that you can use to binge-watch movies, or you can use any other platforms as well. This will surely give patriotic vibes for the day and help to enjoy your day cheerfully. To help you find the best movies, we have listed some of the Bollywood movies you can watch.

This is a masterpiece, and you should watch this one, it tells more about what freedom means. It is one of those movies that provokes your thoughts and makes you think about the subject. This movie is also known for its songs that are produced by A.R. Rahaman. Having an excellent star cast including Amir Khan, Sharman Joshhi, Kunal Kapoor, and many other big names. The story is something that the audience can relate to; it captures pre and post-independence India.

Everyone knows how cult this movie is, and it is one of those movies that every Indian should watch. The movie was released in 1957, and Mehboob khan directs it. It became an evergreen movie that you can watch anytime. The movie revolves around a poor village woman who struggles to raise her children. It shows various phases of life and the struggle from which a poor person goes. This is one of the best movies for Independence day. The film was also nominated for an Academy Award for Best Foreign Language Film in 1958.

Another cult movie for this independence is Mangal Pandey: The Rising. This was based on the 1857 sepoy mutiny, the first organized rebellion against the British Army. It is a story of a person who works for the British Army, and by religion, he is an Indian Hindu Pandit, who is not allowed to eat animal flush. The sepoys contention with the Enfield rifle greased with animal fat takes the mangal Pandey to face-off against East India Company. Maybe Mangal Pandey was the person who seeded the dream of freedom in Indian. The dream took 100 years to come alive.

Starring Shah Rukh Khan as lead, the movie was way ahead of its time. It is a true story based on the life story of an NRI employed with NASA. The man returns to India and advocates for some reforms in his village. The movie shows the reality of development and the root level struggles that you have to tackle to do anything. It is one of India’s cult classic movies and also one of the great movies for Independence Day. You should watch it at least because it will show you the real side of India.

The movie may be one of the most watched patriotic movies, that may be because of its repeated telecast on national television. This is a movie with patriotism, anger, an insight into the British times, and the ground-level issues. If you are patriotic and a cricket lover, you will find this movie surprising because it has both. Also, you will get to some romance and romantic songs. One of the amazon things is that it is also nominated as the Academy Award Nominee for Best Foreign Language Film. Now, this is a 3h 44m movie, which makes it one of the best movies for independence day to watch. If you are comedy loving person, then you can explore more on best Bollywood comedy movies of 2020.

The movie was released in 1978, based on the book “A Flight of Pigeons” penned by Ruskin Bond. It was directed by one of the finest directors Shyam Benegal and produced by Shashi Kapoor. The movie sets around the rebellion of 1857; now, the exciting fact is that in this movie, Shashi Kapoor’s wife Jennifer and their kids Karan Kapoor, Kunal Kapoor, and Sanjana Kapoor were working together. It received many awards like Filmfare Awards, National Film Awards, and a nomination for  Filmfare Awards.

7. The Legend of Bhagat Singh

It is one of those cult classic movies that every Indian should watch at least once. Ajay Devgn plays the role of Bhagat Singh, and Rajkumar Santoshi directs the movie. I assure you, you can’t stop yourself from praising the character portrayal of Bhagat Singh. The film is based on the life events of Sardar Bhagat Singh, who is known for his bravery. He is one of the great freedom fighters we had, who fought for our independence. You will see a life journey of this freedom fighter, and this is undoubtedly one of the best movies for independence day to watch.

8. Parmanu: The Story of Pokhran

You can’t miss a single moment of the movie, and it will always keep you on edge. The film is based on an actual event of a nuclear test. The movie depicts the historical moment of India’s history to become a nuclear power nation. You will find out how difficult it was to carry out the test. One of the main things is that all the events that happened at the time of testing were done so undercover that no one gets to know about the test process. It is a must watch drama-thriller that deserves tons of praise.

Starring John Abraham, it is a spy thriller movie that will make you stunned. The Indian secret agencies hire men for espionage in Pakistan, and you will see so many character changes. The story is a little similar to much like Baby and Raazi like movies but with well-intended drama. It is undoubtedly an engaging movie that will not let you leave your seat until you finish it. It would be one of the best movies for independence day that will make you feel patriotic.

You May Also Like: Romantic Movies for Bollywood Lovers

This is the prequel to one of the hugely praised and critically acclaimed movies: Baby.  If you like mysteries, then you will love this movie. This is an excellent option to watch on this independence day. The basic concept is revenge, but that involves so many mysterious things. The story revolves around a fiery young woman finding her lover’s murderer with the help of a spy agency. The script is well written and portrays everything very effectively, and you should watch this movie. It revolves around revenge, but you will find several other exciting and mysterious things. It can surely be one of the best movies for independence day to watch.

It is one among those movies that ignite patriotism in you and makes you feel proud. The story is heart-touching, and this is one of the most underrated movies. You can watch it on Netflix. The story tracks the Indian soldier who works for the American security agency and goes on a mission to kill the suspects of 26/11. The collection of movies was not good, but it is a masterpiece that is ignored. It shows the actual acting, cinematography, and the power of script. Explore some best movies on Netflix of your taste.

Another spy thriller starring John Abraham has everything you want to see in such a movie. It has a perfect script, cinematography, acting, music, direction, and plot. If you like to watch something that a good film exists then must watch Madras cafe. It is a story that tells about the connection of Tamil war with the former Prime Minister Rajiv Gandhi’s assassination. Based on the true events, it also busts the myth of the Tamil war. Everything is brilliantly shown as it needs to be. It shows many things about India and Sri Lanka guerilla war. One of the best movies for the independence day that worth watching.

Another patriotic movie that needs to be watched by every Indian at least once. The movie won several awards like Nargis Dutt Award for Best Feature Film on National Integration, National Film Award for Best Production Design, etc. As the name says, it depicts the life journey of Netaji Subhash Chandra Bose. It shows the life of Netaji after he resigned from the Indian National Congress presidential post. And also shows the real struggle of  Indian freedom fighters during world war II. The movie is available on various platforms, and you should watch this movie on this independence day. He was talking about the music of the movie. It was made by one of the legendary musicians of the country A.R.Rahman.

If you want to see a more comprehensive view of India’s different social and economic backgrounds, you must watch it. Yeh Mera India is one of the best patriotic drama thrillers that can be watched on this Independence day. The movie shows the discrimination that people face daily and the struggle to deal with prejudice. It is one of the most beautiful movies of the Indian cinema that has everything perfectly portrayed. The story, screenplay, script, acting, music, and direction are impressive and deserve a lot of acclamation. It is centered to give an essential message to the audience that “Humanity is the greatest religion above the flaws of society.”

The movie was released in 1954, and it is a story of a brother who seeks revenge. Revenge from a priest who sells his sister while they were migrating. The priest makes her sister work for prostitution. It also depicts the story of a family that is separated during the partition of the nation. This movie is an action drama that gave us an immortal song, “Dekh Tere Sansar Ki Haalat Kya Ho Gayi Bhagwan.” It also shows the riots, killings, actual footage of refugees, violence, and other things that took place at that time.

Ben Kingsley, an international actor who played the role of our Father of the Nation. The biopic of Mohandas Karamchand Gandhi made history with its direction, picture, and other things. One of the exciting things is that this movie won eight Oscars, and Ben Kingsley won the best actor award. All these are nothing less than massive achievements, along with Best Screenplay Written Directly for the Screen for Briley. The movie depicts all the aspects of Gandhi’s life, starting from a defining moment in 1893 when he is thrown off a South African train to his assassination and funeral. The movie depicts the character and life of Mohandas Karamchand Gandhi so well. It is one of the best movies for independence day to watch.

Independence day is one of the most important days for Indian people. And if you don’t have any plans for the day, send some Indian independence day wishes, quotes, and messages to your family and friends, get a pack of popcorn and start with this list. We tried to include some of the best Bollywood movies that depict India’s history and struggle for freedom and then protecting it. So, get your pizza, popcorn, and other snacks to reach for the emotions’ roller coaster ride. Also, tell us which movie you like the most from the list, and if you think that we missed some names, then tell us in the comment section. We keep our list updated, and hence we will try to include your choice of movie on our list.