All Posts / General / 20+ Famous Indian Kings and Emperors from History 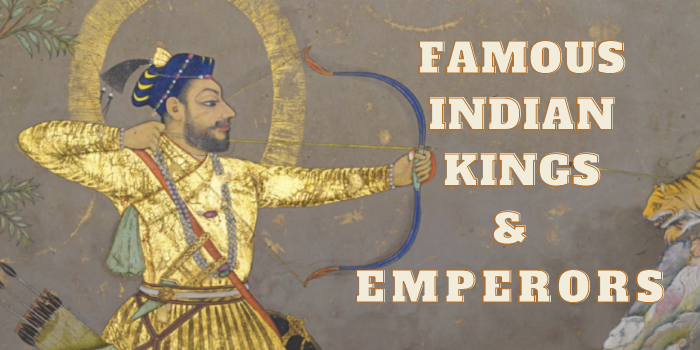 The land of India has witnessed strong and valorous kings and emperors. Throughout history, we read about the dynasties that lifted their swords to conquer, defend, and expand. The story of Indian kings is interesting and worth listening to.

Here we have listed the most famous Indian Kings and Emperors across the history of India. So go ahead and read this informative blog.

Ajatasatru is a significant name among the kings of ancient India. He was a successor of King Bimbisara, who headed the Haryanka Dynasty. Ajatasatru was a valor king who once ruled a huge Kingdom, starting from India’s northern tip to Bengal’s eastern part. The kingdom was also expanded to Punjab and reached Nepal. The expansion was made through wars or marriage alliances like other Indian kings.

Harshavardhana or Harsha was a prominent Indian king’s name of the Vardhan Dynasty in the 7th century AD. He was the successor of Prabhakar Vardhana, who was the founder of the Pushyabhuti Dynasty or the Vardhana Dynasty. Harsh expanded his kingdom to North, Northwest, and South. He established the Kannauj as the capital of the kingdom.

Chandragupta Maurya was the founder of the famous Mauryan Dynasty. He was one of the ancient kings of India yet a significant one. The policies of Chandragupta led him to occupy almost the whole of India under one control. This is why he is considered the greatest emperor of India.

The next one in the famous Indian king’s name list, is Ashoka. He was India’s greatest ruler known in the history of India. He succeeded after Chandragupta Maurya and considered to be the crown of the Mauryan dynasty. The history of Ashoka’s kingdom and his works is known by the pillar inscription planted across his kingdom.

Samudragupta was the son of Chandragupta I, who played a significant role in the expansion of the kingdom. He was one of such Indian kings who conquered the North and South of India. The reason behind this is he was a military genius who added many territories.

Among the many rulers of India and famous Indian kings, Pulakesi II is a bright name of the Chalukya dynasty. He was a valorous king who ruled from north to south India.  He was the son of Mangalesha, and Adityavarman succeeded him.

Raja Raja I was one of the Indian kings who ruled over Tamil Nadu, Malabar Coast, and north Sri Lanka. He was one of the most significant rulers of the 3rd Century BC. There were many conflicts and conquest which he faced with courage.

Prithviraj Chauhan is one of the famous kings’ names in India who ruled in the northern front of the land. He was the son of Someshvara, king of the Chahamana territory, which majorly includes present Rajasthan, Haryana, and Delhi.

Krishnadevaraya is the son of one of the bravest Indian kings, Viranarasimha Raya. He rose his dynasty after the decline of the Delhi dynasty. During his reign, Portuguese travelers visited his kingdom. He expanded his rule towards the Deccan plateau. He is counted among the rulers of India who rose the dynasty to the heights of conquering the neighbors.

Akhbar was the successor of Humayun. He was the most powerful king in Indian history. The reason behind this is that he respected diversity and tolerated all kinds of faith and views. Akbar was such Emperor of India who displayed valor on the battlefield, wisdom in the court, and love for his subjects. Therefore he ruled from north to south and from east to west. So he is undoubtedly one of the greatest kings in the world ever.

The next Indian king’s name is Shah Jaha. He was the son of Jahangir and a lover of architecture. During his reign, Mughal reached cultural glory and was counted among the rich country in the world. He constructed the famous Taj Mahal, which is a popular tourist destination in India. He is counted among few Indian kings who were fond of fine arts.

Aurangzeb was the sixth Mughal Emperor. He is known for being one of the reasons for the downfall of the dynasty. Unlike his successors, he was an orthodox follower of Islam. He captivated Shah Jahan and mistreated his family and his subjects. Yet he was a warrior and skilled on the battlefield.

The name Maharana Pratap comes at the top of the list when it comes to Hindu kings’ name list. He was born into a Rajput family. You can see a glimpse of him in the Zee TV serial Jodha Akhbar.

Sher Shah Suri had a very short period of reign in India, yet he was an influential king. He came victorious over the Mughal dynasty and ruled a huge kingdom from Bihar. He was known for system administration and planning.

Shivaji is one of the great Indian rulers who fought against the Mughals even if there was a huge difference in the resources. He was a valorous warrior who was crowned as Chhatrapati. He pioneered guerrilla warfare tactics.  Even today, Mumbai Airport and Railway station are named after him.

Hyder Ali was the famous Indian ruler of the Kingdom of Mysore. He was mapped on the national politics when he raised the sword against British conquest. While the British were approaching to conquer Deccan, Hyder Ali was the toughest warrior king to defeat. He was among the courageous kings of India in Deccan.

Tipu Sultan was named Tiger of Mysore among other Indian kings. He was the son of Hyder Ali and grew strong than him. Tipu Sultan was credited for the excellent administration of the army and navy. He encouraged the coinage dating system. He fought with the Marathas and Mughals. So it is not wrong to say he was one of the greatest warriors in India.

Maharana Sangram Singh Sisodia is famously known as Rana Sanga. In the life span of 45 years, he achieved fame and victories, which many Indian kings could not. He was born to a Rajput family and succeeded in becoming the ruler of Mewar. It is said that Sanga fought more than 100 battles and on the way lost one eye, one arm, and one leg still never succumbed to the enemies.

The fourth Mughal King was Jahangir, who is still known for his justice. He was one of those Indian kings who loved to take part in literature and art. He was counted as a weak and incapable ruler.

Maharaja Ranjit Singh is called Sher-e-Punjab, and he is also the 1st Maharaja of the Sikh Empire. He is listed as one of the few Indian kings who took the Sikh empire to heights. Maharaja took advantage of the vacuum created after the death of Aurangzeb. He expanded to the entire North India, especially Punjab.

The never-ending story of brave and skilled kings and warriors of India is extremely captivating. Since ancient India, till independence, we have seen significant monarch figures who changed the stream of history time and again. In this blog, we have a curated list of famous kings and emperors who influenced India’s history even though they ruled for a short period. We have you will enjoy the read. If you think we can add more to the Indian king names list, you can let us know.

1. Who is the first king of India?

Chandragupta Maurya is considered to be the first king of India. He was also ruling a large, diverse area, so you can call him an Emperor too.

India was blessed with many courageous and wise kings. In this blog, we have listed famous and popular kings in India.

3. What is an Indian ruler called?

The Indian rulers were traditionally called Maharaja (Great King). With the coming of Islamic kings, the kings were also called Sultan.

4. Who was the worst king of India?

Aurangzeb is considered the worst king in Indian history because of his inhuman policies and heavy taxation.

5. Who ruled the largest Indian Empire?

According to the study, the Mauryan Empire ruled 152% of present India.

6. Who is the greatest Indian warrior?

Ashoka, Chandragupta Maurya, Prithviraj Chauhan, Tipu Sultan, and Rana Sanga are some of the greatest warriors in Indian history.

7. Which Indian kings died on the battlefield?

8. Did Indian kings rule other countries?

Ajatasatru, Ashoka, and a few other kings ruled over other neighboring countries.

9. Which Indian kings defeated the British?

Tipu Sultan defeated British power to save the Mysore Kingdom in the Deccan.