12 Famous Fashion Designers in India Who Have Revamp Indian Fashion 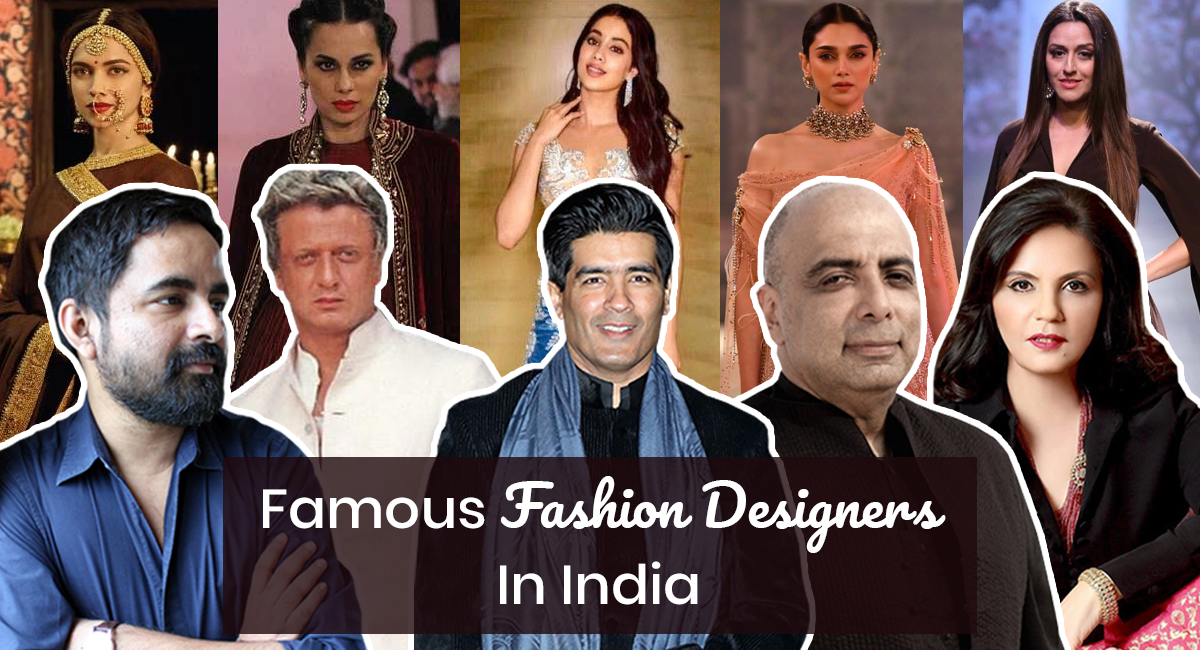 ‘’Life is too short to wear boring clothes’’ said Carle Cushnie. Thankfully, there are a bunch of fashion designers who have worked hard in India to make the fashion culture prominent in the country. Here we have curated a list of fashion designers in India who have revamp Indian fashion. Most of these designers have online stores dedicated to their collection and the perfect place for people to shop for fashionable clothes.

The ace fashion designer started his carrier a model and then soon turned into a costume designer. In 1990 he designed clothes for movie Swarg. After his breakthrough, he styled Urmilla Matondkar in Rangeela (1995). The movie became a blockbuster, and Manish Malhotra got an appreciation for his work. Owing to his craft and the work he has done for the fashion industry, Manish has been awarded as the best costume designer in 1999 and 2002, 2005 and 2007, respectively.

Ritu Kumar is amongst the pioneers of the fashion industry in India. She completed her education in museology and history and then forayed into fashion designing. Here works represent ancient designs crafted in a modern way. Today she is one of the famous fashion designers in India and across the world. Ritu Kumar was the first in the country who came up with the boutique culture. She has more than 50 stores in India and other parts of the world.

Known to be the Indian couturier Tarun Tahiliani has marked his niche in the Indian fashion industry. Owing to his work, he is also known as Karl Lagerfeld of India’ by British stylist Isabella Blow. Tarun Tahiliani was the first designer who was invited to Milan Fashion week to represent his work. In his over 26 years in the industry, he has worked with international artists like Lady Gaga and Bollywood heroines like Dipika Padukone, Aishwarya Rai Kapoor, and other leading actresses.

Undoubtedly Sabyasachi is one of the most famous fashion designers in India. He started designing in the year 1999. He is known for creating traditional and ethnic pieces that are inspired by the backdrops and scenic views of the Kolkata. Though he is famous as a king of conventional design, he has a good insight into western culture. He has worked with Christian Louboutin as well. He owns 18 stores In India and six stores in the world and designs both men’s and women’s clothing and accessories.

He has a keen interest in designing art forms, and this makes him different from other fashion designers in India. His couture collection represents the gist of contemporary Indian fashion. In 1990 the designer launched the label that got him a name in the fashion industry. He has hosted fashion shows in Paris, Singapore, New York, Geneva, and India. In the past has collaborated with many inter designers such as Louboutin, Taylor, Zippo Lighters, Zippo Lighters, and many more to name.

Without a doubt, Anita Dongre is one of the famous fashion designers in India. In the year 2008, she was awarded for Excellence in Fashion Design. Her designs are available under four unique brands which are Anita Dongre, AND, Global Desi, and Anita Dongre Grassroot. Anita’s brand caters to menswear and bridal. With more than 13 stores in India and two international stores, she has set a benchmark in the world with her design.

The duo started fashion designing in India in the year 2000, and in 2003 they came up with their label. The couple has more than 20 years of experience that reflects in their craft, and this is the reason why they both are amongst the top fashion designers in India. Shyamal & Bhumika’s work is infused with Indian inspiration. They are known for their intricate work and design.

Next in our list of top fashion designers is Varun Bahl. He surely does not need any introduction! His work is all about creating style signatures, and thus, most of the clothes designed by him would be fashionable and unique at the same time. He holds an expertise in designing the blend of contemporary with classic. He is amongst the few fashion designers who revolutionized Indian bridal wear.

Neeta Lulla is one of the finest fashion designers of India who started as a costume designer. She has styled many actors and actresses. Neeta Lulla has also won numerous national awards for costume designing. Her works reflect that she is a true feminist.

Anamika Khanna is a well-known Indian fashion designer who has also been covered by the Business of Fashion for her distinguished work that includes a blend of the Indian textiles and techniques along with the western tailoring and silhouette. Her philosophy is being innovative with Indian style that keeps her relevant to the modern world. She was also amongst the first Indian women designers who got the opportunity to showcase her designs in the Paris fashion week.

Abu Jani and Sandeep Khosla started their label in 1986, and the duo has been working together for more than 30 years. The duo is known for its captivating style and designs. From modern to traditional designs that have set a niche in all the segments. It was Abu Jani & Sandeep Khosla designed saree that Sonam Kapoor wore in the Cannes.

Unique and unusual are two elements that you will find in most of their collection. The brand is known for the signature use of prints, feathers, and sequins. Dresses designed by Falguni Shane Peacock are apt for the party.

There are many celebrated fashion designers in India, such as Manish Malhotra, Neeta Lulla, and many others who have changed the fashion landscape of the country and have represented the country at the international level as well.