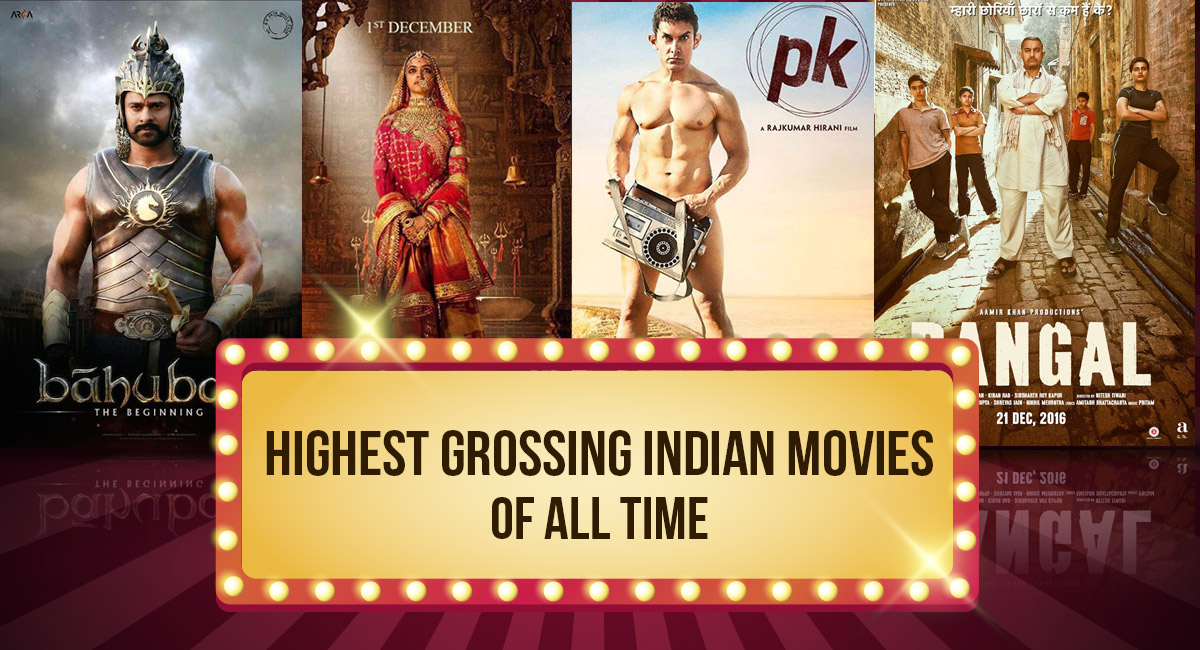 In the last decade, there has been a massive shift in filmmaking. There is an improvement in the movie’s quality, and it wouldn’t be wrong to say that Indian cinema is progressing each year. Movies like Barfi! and Lagaan have made their ways to nomination in Oscars while making the country proud.

On the other hand, Indian cinema also has movies like Baahubali and Dangal who have shattered many box office records, not within the country but worldwide. Let’s have a look at the top 25 highest-grossing Indian films that have earned the business of more than 200 crores worldwide as well.

K.G.F. Chapter 2 is the latest name on the most earned Bollywood movies list. It got released in April 2022. The film was created on a huge budget of Rs.100 crore and has been listed as one of the most high-priced Kannada movies ever produced.

Produced under the direction of S.S. Rajamouli, the film RRR is 2022’s most trending Indian Telugu language movie. The storyline of this film revolves around Alluri Sitaram Raju and Komaram Bheem and their fight against the Britishers. Currently, this movie is put on the list of the top 10 highest-grossing Indian movies.

This movie has also been regarded as one of the highest-grossing Bollywood movies. The picture was made by Aamir Khan Productions. It explores the life of a teenage girl who wishes to become a singer and publishes videos on YouTube but somehow manages to hide her identity with a niqab.

This film’s name has been put into the list of the most earned movies in India. The movie was released recently in June 2022. This Tamil action thriller movie has well-known actors like Kamal Hassan and Suriya in a cameo roles.

This Telugu action drama movie has hit the list of Indian most collection movies. It features Allu Arjun alongside Fahadh Fassil and Rashmika Mandanna in the starring role. The story of this movie explores a coolie who gets indulges in the smuggling of red sandalwood. It tops on the highest-grossing Indian film in the Telugu language till now.

Mr. Perfectionist starrer Dangal was inspired by the real-life Phogat family. The movie taught us that girls are no less than any. Dangal made a record as it was the first Indian movie that made a business of more than 300 crores, making it one of the highest-grossing Indian films of all times

The movie shattered all the previous box office records, being one of the most earned Bollywood movies. The action-packed film finally answered -“Katappa ne Bahubali ko kyun mara?” from its prequel, which raised the fans’ curiosity level.

PK is not only one of the highest-grossing Indian movies but is also one of the best films made so far in the country. The movie’s story revolves around an alien, played by Aamir Khan, who explores different aspects of people on earth.

The movie won many accolades for its storyline! Besides Aamir Khan, the film also has Anushka Sharma and the late Sushant Singh Rajput.

The movie had one of the richest South Indian actors, Rajinikanth. The sci-fi thriller crossed more than Rs. 500 crores in its opening weekend and became one of the highest-grossing films in India and worldwide. The movie was also dubbed in Telugu and Hindi and is counted among one of the most earned movies in India.

The epic action film was simultaneously made in many languages, including Tamil and Telugu. The movie was cinematic bliss. Not forget, actors like Prabhas, Rana Daggubati, and Anushka Shetty added life to their characters, making it one of the best Indian movies.

Next on the list of highest-grossing Indian movies is Bajrangi Bhaijaan. The movie had one of the highest-paid Bollywood actors in the country, Salman Khan. Bajrangi Bhaijaan was an emotional movie that touched many hearts. The little girl swooned the audience with her powerful acting. The movie had light humor and some of the best songs.

The movie was inspired by the wrestler-Sultan’s real-life story and the challenges he faced to balance his career and personal life. It is also one of the top-rated romantic Bollywood movies of the year.

The film crossed more than Rs. 600 crore across the globe and became one of the highest earning Bollywood movies.

Another movie that is based on a real-life character in Sanju. The film is centered on the real life of actor Sanjay Dutt. It showcased different sides of the actor’s life. Actor Ranbir Kapoor donned the role of Sanjay Dutt in the movie.

With more than 500 crore collections at the box office, Sanju became the highest grossing film of Bollywood of 2018. The movie received many accolades for its storyline and direction. No doubt, the film is listed at one of the top positions for highest grossing Indian movie.

The next name on India’s most earned movie is Padmaavat. The magnum opus narrates the life of queen Padmavati who sacrificed her life to resist against the invader Jalal-ud-din Khalji. While the movie was banned in many parts of the country, it managed to break many box office records and was the top-grossing Bollywood movie of 2018.

The action thriller was released multi-languages, including Hindi, Telugu, and Tamil. War was released across the globe in conventional, 4DX, and MX4D cinemas.

The movie was applauded for its action sequences and visual effects. The leading actors, Roshan and Shroff, were praised for their performances.

War made the record of the highest opening day collection by Hindi Cinema. The film was a massive success at the box office and is listed amongst the Indian most collection movie list.

Andhadhun was a black comedy crime thriller film that narrates the story of a blind musician who is unwantedly trapped in the murder case.

The movie garnered positive reviews and numerous accolades for its unique story and power pact performance delivered by the leading actors. It is also put into the list of the most earned movie in Bollywood.

With the anthem of ”All is Well,” the movie made many box office records. 3 Idiots was a coming-of-age comedy-drama that showcased the challenges faced by the students. The movie was the highest profit movie in India on its opening weekend. Also, it was the highest-grossing Indian film of its time.

The action comedy film was released worldwide and received mixed reviews from movie critics. Irrespective of the fact, the movie swept many box office records and was the fastest movie to collect Rs.1 billion. It was one of the highest-grossing Indian films of the year 2018.

Shahid Kapoor’s starrer Kabir Singh was one of the best romantic movies of Bollywood. The film was well-received by the audience. With a 60 crores budget, the movie earned over 350 crores and was a Bollywood blockbuster. The actor was applauded for his strong performance and occupied India’s most earning movie list.

The historical drama narrates the real story of the forgotten Maratha, Tanaji Malusare. The movie was released across the globe and received positive reviews. The film was released in 3-D and conventional theatres.

Next in the list of the Highest Grossing Indian movies is the epic historical and romantic film – Bajirao Mastani. The movie was appreciated for its grandeur and scale. This was one of the most expensive Bollywood movies with a budget of Rs.145 crore. It gained the business of more than 350 crores, making it one of the most blockbuster movies in India.

Another name on the Indian best collection movies list is Uri. It is a military action film based on True Stories. The movie received positive reviews from critics and ranked amongst the highest-grossing Indian films. The film also received many accolades.

The sequel to 2012 released Ek Tha Tiger; Tiger Zinda Hai was action-packed. The movie had a stellar star cast, including Salman Khan and Katrina Kaif. Tiger Zinda Hai got mixed reviews. However, the film set many box office records during its theatrical release and was one of the highest-grossing Indian movies across the Globe on 2017

The periodic drama is one of the top-rated and highest-grossing films in India. The movie also has its sequel. KGF-Chapter 1 was praised for its art direction and cinematography.  It has been released on many OTT channels.

MS Dhoni was yet another biopic. As the name of the movie says, the film was based on the real life of the Indian cricketer and former captain Mahendra Singh Dhoni. The movie is bliss for all the ardent fans of the cricketer.

MS Dhoni was one of the first Bollywood movies released in more than 60 countries. Besides Hindi, the film was also dubbed in Telugu, Marathi, and Tamil in the regional languages. It was commercially and critically successful and was one of the top names in the list of highest-grossing Indian movies of 2016.

To your surprise, India is the highest producer of movies across the globe. More than 1800 Indian movies are released in different languages, including Hindi, Marathi, Kannad, Tamil, Telugu, and many others. Some of them have made the country proud by becoming the highest grossing Indian movies in the globe. In this blog, we have listed 25 Bollywood movies that went on to become blockbusters by making huge business at the box office. Do let us know if we have missed the name of any movie on the highest-grossing Indian film list.

Amazing Red Banana Benefits for Health: How it is different from Yellow Banana
Top 16 Singers in Bollywood: Female and Male Playback Singers of All Time