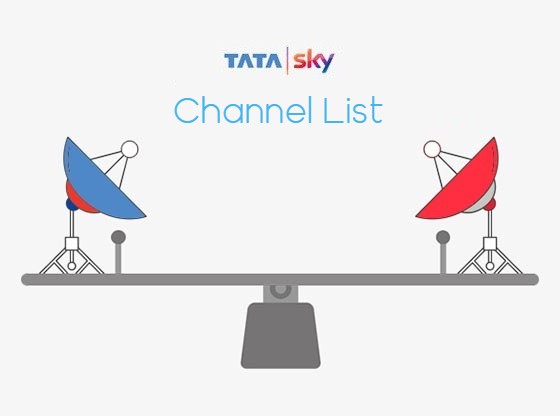 Why should you choose Tata Sky?

One of the top-most reasons to choose Tata Sky as your preferred DTH provide is because of its extensive Tata Sky channel list. Another factor that majorly contributes to the popularity of choosing Tata Sky is its ability to provide far more HD channels in comparison to its competitors. Also, it is extremely economical and it gives one the option to recharge in various denominations depending on one’s personal requirement and the pack they have subscribed for.

Another benefit of selecting Tata Sky is that one has the freedom to not only choose from a diverse array of packs and channels, but one can also make their own customized pack. Excellent customer care service with prompt response and resolution of the issue further adds to the list of benefits of choosing Tata Sky channels over other DTH providers.

Tata Sky gives you the option of choosing between different set-top boxes which include Tata Sky SD, Tata Sky HD, and Tata Sky+HD.

How to choose from various Tata Sky Packs?

There are different types of packs to choose from, however, there is a certain order to choosing the packs. Base Packs have to be selected and beyond that, you have the option to choose from Add-on Packs, Regional Packs, or Platinum Packs.

You can take your pick from a selection of base packs such as Dhamaka Pack, South Special, and South Sports Bonanza. Some of the other base packs are Dhamaal English, Sports Dhamaka, Bumper, Dhamaka Kids, Dhamaal Mix, and Dhamaal Kids. There is also an option of My 99 Pack for only Rs.99 per month, to which you can later add any regional or add-on pack.

After choosing your preferred base pack, you can now opt for one of the Add-On packs. Some of the options available under Add-On packs include Hindi Entertainment, Hindi Movies, and Kids priced at only Rs.70 per month. Hindi News, Music and Knowledge, and Lifestyle are available for only Rs.50 per month. English movies and English combo are priced at Rs.90 and Rs.140 per month respectively.

Tata Sky gives priority to customer satisfaction so it has come up with a regional pack wherein customers can choose channels from a varied range of languages based on their vernacular so that they can thoroughly enjoy all the TV programs. The regional pack of Hindi, Punjabi, Gujarati, and Marathi are available at Rs 40 per month, while Bengali & Odia can be availed at Rs 65 per month and Kannada, Tamil, Telugu, and Malayalam channels are priced at Rs. 70 per month.

Here is a list of a few names of regional channels along with channel numbers:

Tata Sky has come up with a new set of Platinum Packs that comprise Platinum SD, Platinum HD, Platinum South SD, and Platinum South HD. The subscribers of Tata Sky can avail of all these four packs in semi-annual, annual, and biennial versions. The benefits of going with these long-term versions are the users of Tata Sky will get free service & relocation visits. You can also enjoy free Showcase movies based on the term selected and also subscribers will be getting Bollywood Premiere as a complimentary. Below are a few names of channels that subscribers can enjoy by subscribing to the Platinum SD or HD packs:

How to Set Caller Tune in Airtel for free via Wynk App & SMS?
Top-Rated Kids Magazine for your Little One