All Posts / Entertainment / Bollywood Movies Based on Indian Army & Navy 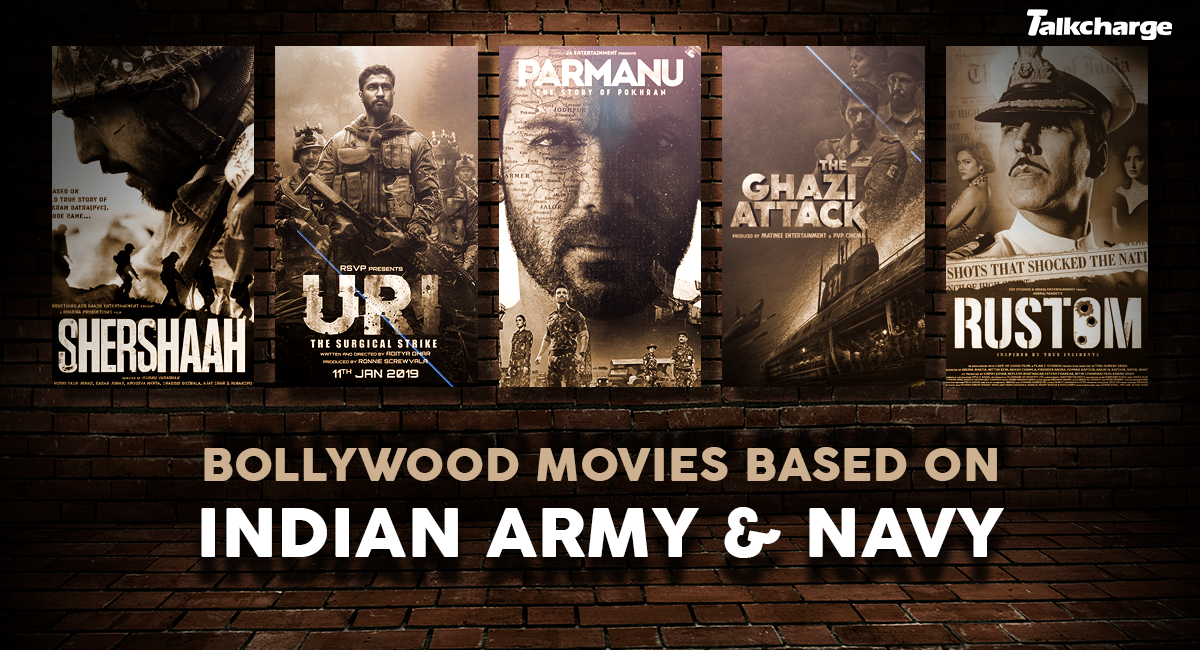 It wouldn’t be wrong to say that Bollywood movies are, at times a mirror of the society. Hindi Cinema has time and again given us masterpieces that beautifully depict the Indian army and navy. From movies with larger than life stories to movies showcasing real-life events in the most authentic way Bollywood has witnessed a huge transition with the change in time. One of the significant topics of Indian Army movies like Border and recently released Shershah has been Indo- Pak wars, which highlights the velour and glory of army officers. On the other hand, Indian films like The Gazi Attack showcased the life of navy officers who can go to any extent to save the country.

Shershaah is an Indian biographical war film. It follows the life of Param Vir Chakra-awardee Captain Vikram Batra, who lost his life in the Kargil War (199).  Featuring Sidharth Malhotra and Kiara Advani in pivotal roles, Shershah is one of the latest Indian army movies. The songs of a movie like “Raataan Lambiyan”, Ranjha” and “Mann Bharryaa 2.0” soon top the list of chartbusters upon their release.  Though the film received mixed reviews, it was high acclaimed by the audience, making it one of the most-watched movies on Amazon Prime.

URI is one of the top-rated Indian movies based on the real-life events of the retaliation to the URI attack that took place in 2016. The film was divided into five chapters that showcased each perspective of the Pulwama attack and the Surgical Strike led after. Vickey Kaushal essayed the role of Major Vihaan Singh Shergill, who was a Para SF team leader. The film has received many prestigious awards like the National Film Awards and Filmfare Awards in various categories such as Best Director, Best Actor, Best Editing, etc.

The action-packed movie had John Abraham in the lead as IAS Ashwat Raina, who, along with his team, is sent to Pokhran (Rajasthan) to re-conduct the nuclear task. The movie defines its title very well and is a sheer delight for army lovers. You can watch this army movie on OTT channels like Netflix.

Based on the true events from the Indo-Pakistani Naval War of 1971, The Ghazi Attack traces warfare that led between the Indian submarine, S-21 and Pakistan’s PNS Ghazi, leading to the mysterious sinking of the Ghazi. The movie was simultaneously shot in Telugu and was earlier titled as Ghazi.

Starring Akshay Kumar in the lead, Rustom is the tale of the Navy officer Commander Rustom Pavri.  This captivating crime thriller is loosely based on the K. M. Nanavati v. State of Maharashtra court case. It revolves around the navy officer who equally loves his wife and nation.

Featuring Akshay Kumar, Govinda, and Sonakshi Sinha in pivotal roles, Holiday: A Soldier is Never Off Duty is about a brave Indian Army man, Virat Bakshi. Virat with the help of his friend Mukund plans to knock down terrorist who plans to destroy Mumbai. The movie was a commercial hit at the box office and was one of the highest-grossing films of that year.

Shaurya is an Indian courtroom drama that is inspired by the American legal drama A Few Good Men. With the background of the Kashmir conflict, the film concentrates on an Indian Army Officer, Capt. Javed Khan who is accused of killing his commanding general, Major Rathod. This movie redefined how Bollywood looks at the army and remains one of the best Indian army movies to date.

Lakshya was loosely based on the 1999 India-Pakistan Kargil war on Tiger Hill. With the backdrop of war, Lakshya is the story of the aimless young man Karan Shergill who turns into a sincere and determined army man after a series of events. Soon he is promoted to the rank of acting Captain and is sent on the most important mission.  The movie also has Preity Zinta as Romila Dutta, Karan love interest, and megastar Amitabh Bachchan, who assays Col. Sunil Damle. Lakshya has some of the best songs like “Main Aisa Kyun Hoon”, “Agar Main Kahoon”, and Lakshya title track with a similar fan following even today.

Dhoop is the Indian war drama loosely based on Captain Anuj Nayyar, MVC and the ordeals his family faces. Captain Rohit Kapoor is martyred in operations against Pakistani Army soldiers in the southwest sector of Tiger Hill on 5 July 1999 as part of the Kargil conflict; upon his death his family witnesses life-changing challenges.

Next in our list of best Indian army movies is the 1997 released iconic war movie Border. It was inspired by the real-life story of the Indian army during the Indo-Pakistani War of 1971. The movie was a blockbuster at Box Office and one of the highest-grossing movies of the year. The movie received various accolades, and its songs like ”Sandese Aate Hai” has huge popularity even today.

Prahaar: The Final Attack is amongst the finest Indian army movies in Hindi. It has Nana Patekar, Madhuri Dixit and Dimple Kapadia in the leading role. The film revolves around an honest and tough Army Officer who can go to any extent in order to seek justice for his subordinate’s wrongful death.

Haqeeqat film is a timeless piece of Hindi Cinema. Undoubtedly, it was one of the first Indian army based movies. With the backdrop of the Sino-Indian War in 1962, it is the story of Captain Bahadur Singh (Dharmendra), who martyred during China’s troop invasion in the region of the Indo-China border. The coloured version of this movie was released in August 2016 at the Independence Day Film Festival. It is currently available on Zee5.

Above, we have listed some of the best Bollywood movies that are based on the Indian army and navy. Like Haqeeqat, Prahaar, and Border, many of them have become cult classics, owing to their intriguing war-based stories and power-packed performances. If you have any of the movies, you can watch them on the OTT platform and relish the aura of the Indian army and navy.

How to Use Aloe Vera Gel on Hair: DIY Recipe & Hair Masks
How to Change Address in Aadhaar Card?