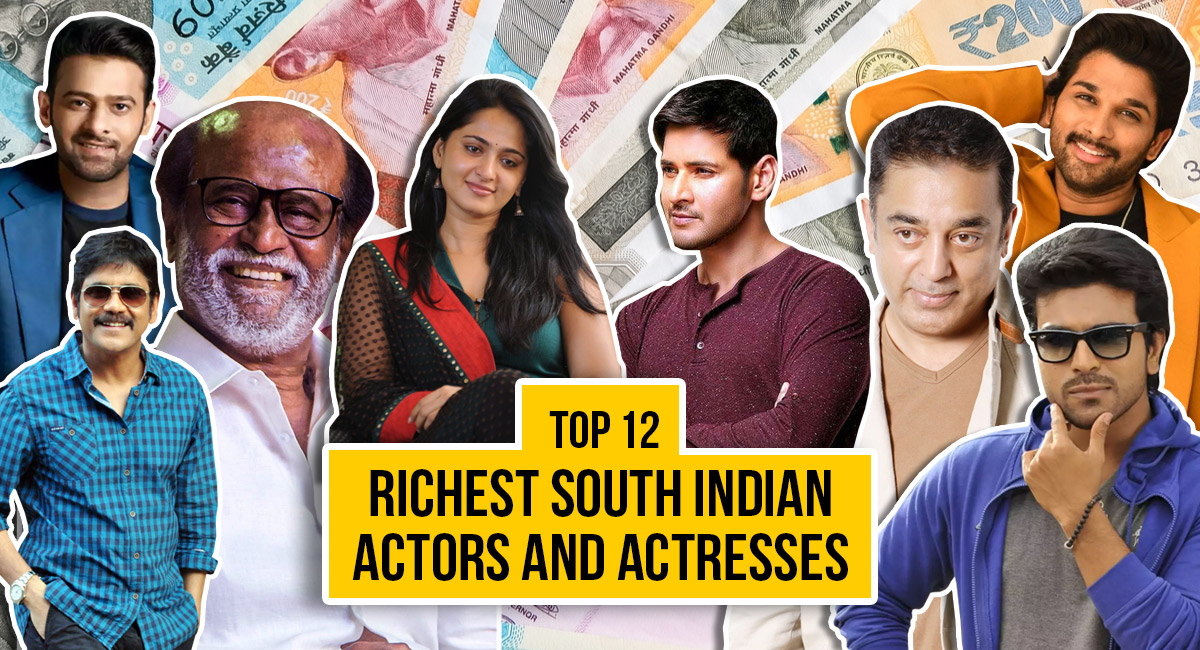 After Hollywood, Bollywood stars are believed to be the richest stars, but to your surprise, many South Indian actors earn huge money. Late actors like Chiranjeevi had a whopping net worth of Rs. 1500 Crore. Taking inspiration from him, we have actors like Rajnikanth, Ram Charan, Akkineni Nagarjuna, and many more on the list of richest South Indian actors.

Some of the Tollywood movies like Baahubali 1 and 2 have broken many box office records across the globe, making their actors like Prabhas and Anushka Shetty the highest-paid actors in the South cinema.

South Indian actors enjoy a huge fan following across the globe. They earn money through various projects that include movies, endorsement, reality show hosting, and many others. Some of them, like Rana Daggubati, are also established, entrepreneurs. So, keep reading this blog to know about these south richest actor and their net worth.

The actor-cum-producer is a recipient of several awards that including the Nandi Awards, Santosham Best Actor Awards, and Filmfare Awards.

The next name on the list of the richest actor in South India includes Nagarjuna. The actor has worked in more than 100 films and has majorly played Biographical Roles. He rose to fame with his romantic drama film – Geetanjali, which also won him National Award. Owing to his several hits, the actor has recently increased his fees and charges approximately Rs. 8 crores for his project.

Also known as “Ulaganayagan” by his fans, Kamal Haasan has worn many hats. He is a playback singer, screenwriter, film director, producer, dancer, and actor. He has worked in many successful Hindi, Telugu, Malayalam, Kannada, Hindi, and Bengali films.

This south Indian richest actor has been awarded the Kalaimamani award and Padma Bhushan. The megastar started his career as a child artist Kalathur Kannamma in 1960. He is currently hosting Bigg Boss 4 Tamil. The actor charges a huge amount for his appearance in movies, reality shows, and advertisements, which has brought him to the list of richest South Indian actors.

Born as Shivaji Rao Gaekwad, Rajnikanth is one of the top South Indian actors with a primary foot in Tamil Cinema. He marked his debut in the year 1975 with the movie Apoorva Raagangal. In the year 1995, the ace actor earned a god-like status in the Tamil industry after the release of Baashha, which was a commercially hit. He is paid Rs. 30 crores as his fees, which has made him the highest-paid actor in Kollywood.

In 2007, his movie Sivaji was one of the first Indian movies that earned the business of 100 crores. The actor earned Rs.26 crores for his role in the film and entered among the highest-paid actors in Asia. Rajnikanth, also known as Thalaivar, has also worked in numerous Bollywood movies like Chaalbaaz, Bulandi, Robot, Kochadaiiyaan, and many others.

Also known as “Thalapathy”, Vijay is the richest South Indian actor as he charges Rs. 80 -100 crores as his fees. The Tamil actor has given many blockbusters that include Thuppakki, Mersal, Sarkar 2018, Bigil, Ghilli, and many more to name. After Rajnikanth, he is the highest-paid grossing actor in the Tamil industry

Mohanlal Viswanathan is an Indian actor, philanthropist, producer, distributor, and playback singer. The veteran actor has been part of more than 340 Malayalam movies and many other regional movies.

He first appeared in the 1980 romance film Manjil Virinja Pookkal as a villain. For many years, the actor continued to do villainous roles for years. The year 1986 was a remarkable year for Mohanlal as he became the established actor in South Cinema with many successful movies in his kitty.

While he predominantly works in Malayalam movies, he has also worked in Hindi, Tamil, Kannada, and Telugu movies, such as Iruva, Company, and Janatha Garage.

With more than hundreds of commercial heaters, he charges Rs. 6 crores for a movie and Rs. 50 lakhs for endorsement and is the highest-paid actor in the Malayalam Cinema.

Allu Arjun is also the richest South Indian actor, he charges approximately Rs. 10 crores for his films. The actor mainly works in the Telugu industry. He is credited for his portrayal in the movies like Arya, Bunny, Desamuduru, Race Gurram, Duvvada Jagannadham, and Sarrainodu, which has made the business of more than Rs. 100 crore. He charges Rs. 10 crores per movie.

Prabhas is one of the most famous and richest South Indian actors. The actor charmed his audience with his role in the magnum opus, Baahubali 1 and Baahubali 2.

He has also received the state Nandi Award for Best Actor for his powerful acting in the movie Mirchi. He is the first actor from South Cinema to have a wax statue at Madame Tussauds,

His movie Baahubali 2: The Conclusion earned Rs.1, 000 crores in different languages and is one of the highest-grossing films.

The celebrated actor came into the limelight with his song “Why this Kolaveri Di”, which was also the first music video that crossed 100 million views on YouTube. Besides mainly working in the Telugu movie industry, the actor made his debut in Bollywood with a romantic Hindi film– Raanjhanaa

The actor, producer, and entrepreneur has worn many hats over the years. The celebrated actor has worked in several successful Bollywood and Tamil movies such as Dum Maaro Dum, Leader, Krishnam Vande Jagadgurum, Baahubali, and several others to name.

The charismatic actor charges Rs 15 crore from a single movie, making him one of the highest-paid South Indian actors in 2022.

Ghattamaneni Mahesh Babu, popularly known as Mahesh Babu, is an Indian actor, media personality, philanthropist, and producer. He has worked in more than 25 movies, predominantly in Telugu movies.

With several successful movies like Pokiri, Seethamma Vakitlo Sirimalle Chettu, Bharat Ane Nenu, and more to list, the actor is regarded as the Prince of Tollywood superstar of Telugu cinema. He has also won many accolades that including CineMAA Awards, South Indian International movie awards, and International Indian Film Academy Award.

Next on the list of Tollywood’s richest actors is the famous actress Anushka Shetty. She has given a number of commercial hits, but Baahubali and Baahubali 2 remain her best movies in which she played the role of Devasana.

She is amongst the highest-paid actors in South Industry and is known as the Lady Superstar of South Indian cinema. She started her acting career with the Telugu film Super in the year 2005, which won her a nomination for Filmfare Best Supporting Actress – Telugu. Besides Baahubali 1 and 2, some of her best movies include Lakshyam, Souryam, and Chintakayala Ravi.

With popular movies like Baahubali, KGF, Bigil, Kabali, and many more to list, Tollywood has become a celebrated movie industry. The South cinema has some of the finest actors like Rajnikanth, Vijay, Kamal Haasan, Anushka Shetty, etc. who charge a huge amount, making them the richest actors and actresses in the South Indian industry. In the above blog, we have listed the names of top richest South Indian actors. Along with that we have also mentioned the south actor net worth 2022.

Rajnikanth is the No 1 hero in South India

2. Who is the richest Tamil actor?

Rajnikanth and Vijay are the richest Tamil actors.

3. Who is the highest-paid South Indian actress?

Anushka Shetty is the highest-paid female actor in Tollywood.

The richest South Indian actor in 2022 is Ram Charan.

5. What is South Indian richest actor’s net worth?

The highest net worth actor in South India is 1370 Crores.

The richest hero in South India is Ram Charan. This Tollywood richest actor’s net worth is 1370 Crores.