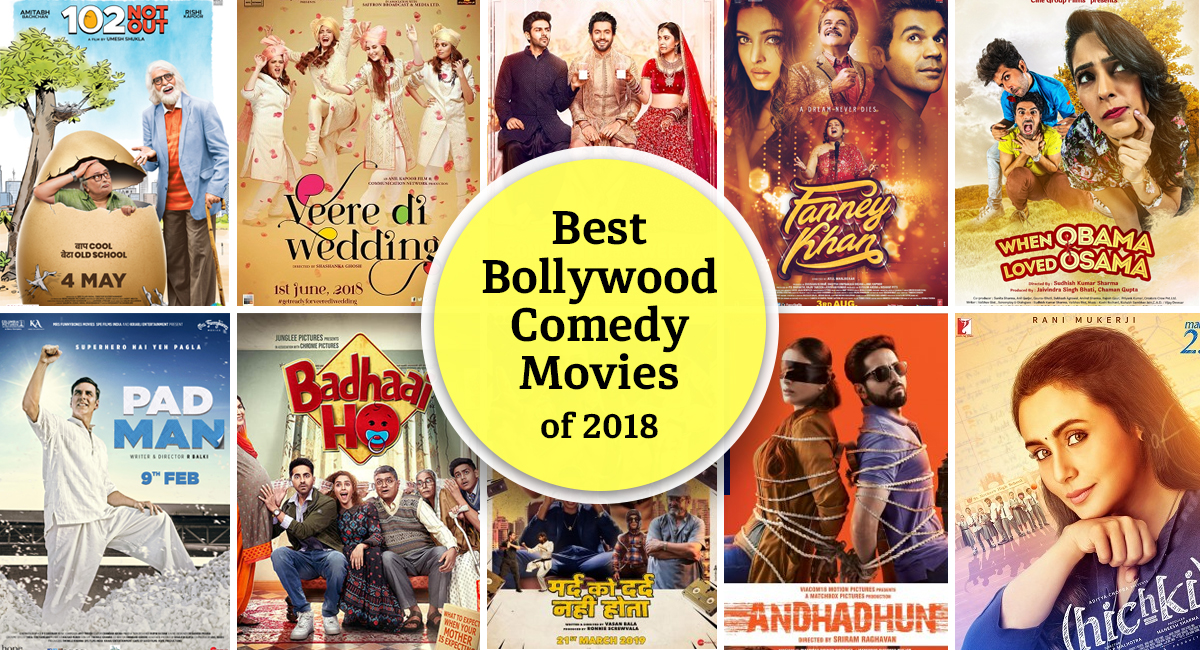 A good laugh heals a lot of hurt. A good comedy movie is full of elements that give laughing does to everyone. The Bollywood comedy movie has always amused its audience with incredible movies to make the audience laugh out loud. Even if you are a big fan of Hollywood comedy movies, watching Hindi comedy movies never fail to lighten our mood and fill the moment with so much fun and frolic. If you are looking for the best Bollywood comedy movies to watch in 2018, here is the list of 25 movies you can watch when you need a good laugh, hilarious and exciting comedy. We have created this list with a valid IMDb rating that you know how the public response to the movie is. Go through the list and enjoy yourself with friends and family.

A new generation movie directed by Amit R Sharma is a perfect example of breaking stereotypes. Ayushmann Khurana, playing as a 25-year old man,  Nakul is completely shocked to know that his mother is pregnant when he is at the age of marriage. This discovery creates a series of awkward situations and struggles. The movie adds comedy through dialogues and situations, which is fun to watch. Nakul is also struggling to come in terms with this news when revealed to his girlfriend, Renee. This movie pushes our boundaries to think of the tabooed situations in our society. It has to be the first in the list of 25 Best Bollywood Comedy Movies of 2018.

A film that features Bollywood legends, Amitabh Bachchan and Rishi Kapoor, 102 Not Out, is a ‘not-to-be-missed’ comedy film of 2018. Amitabh Bachchan plays a 102-year-old lively & energetic man who wants to break the oldest-man-alive record, whereas Rishi Kapoor plays the role of his 75-year-old grumpy son. The twists and plots of the story will make you roll over with laughter.

Veere Di Wedding is a movie about four friends, Kareena Kapoor Khan, Sonam Kapoor Ahuja, Swara Bhaskar & Shikha Talsania. It’s an exciting & emotional journey of these friends who come together after years to attend Kareena’s marriage. Each one of them has a different perspective regarding life & marriage, and each one’s point of view is sure to take you on a hilarious journey.

This movie, as rightly said, is a “war between Bromance & Romance.” Titu or Sunny Nijar finds his lady love, Nusrat Bharucha, and thinks she is perfect. Nusrat or Sweety, however, is only interested in Titu’s money. Titu’s childhood pal, Sonu, gets to know this fact and tries to break the marriage. Sweety, on the other hand, does everything possible to win over Titu. This dispute between Sonu & Sweety results in humor & entertainment. It is a hit sequel of Pyaar ka Punchnama if you know why we have placed this movie in the list of Best Bollywood Comedy Movies of 2018.

Akshay Kumar again challenging society’s ways and addressing a vital cause, starred in the movie, Padman. The director has craftily tailored the comedy and seriousness of the issue.  Playing as Laxmikant, he is upset that his wife Gayatri uses an unhygienic cloth during her periods or menstrual cycle. After that, he decides to create a pad making machine that can manufacture affordable sanitary pads. It directs the audience to behavioral changes and raises awareness.

Fanney Khan is a musical comedy film. In the movie, the protagonist named Fanney Khan is a struggling singer. Fanney, however, pushes his young, ambitious, and overweight daughter to be a singer. He even goes to the level to kidnap a famous soloist to make his daughter a star. This entire movie is a roller-coaster journey. This has started a new genre of musical comedy, and therefore, it is one of the Best Bollywood Comedy Movies in 2018.

This comedy movie shows the struggles of a woman with Tourette syndrome becomes a teacher in an elite school. It unfolds the pressure and challenges she goes through to turns her weakness into her biggest strength. During her journey, there is a comedy in perfect timing.

This movie represents the struggle of any urban youth. Sanjay and Karina are individually looking to buy a house but don’t have enough income. They came across a couple of house schemes. So they entered into the convenience of marriage. While finding a home, they found true love. It is a light mood movie with family comedy, which is a treat to watch. This lies in the mid of comedy and the story of lovers.  You can consider the list of romantic movies for Bollywood lovers.

Shah Rukh Khan playing as Bauua, is a vertically challenged person.  He falls in love with Aafia, who is a scientist and suffering from cerebral palsy. Later he breaks up with her and falls for another woman.  However, his life changes when you found the purpose of his life. It is an excellent comedy movie but also challenges our prejudices about a short-statured man. In this movie, Bauua is not only the element of fun dialogues but also shows that he has a specific purpose in life.

Happy Phirr Bhag Jayegi is a sequel to Happy Bhag Jayegi, released in the year 2016. The plot revolves around Harpreet Kaur 1, played by Diana Penty and Harpreet Kaur 2, played by Sonakshi Sinha. Diana Penty accompanies her hubby Guddu (Ali Fazal) to Shanghai in China, where Guddu was invited to sing in at an event. On the same flight, Sonakshi Sinha flies to search for the guy who ditched her on her wedding day. The confusion in both the girls’ names is a comedy of errors and will make you burst out laughing.   It’s not the end! 2018 has more movies in its bouquet. These movies are sure to take you on a laughing spree.

Kajol, acting as Eela, is an aspiring singer. But she gives up on her career after her husband left her and her son, Vivaan. Years later, Vivaan encourages his mother to continue studying and pursuing her dreams. The fun starts there when they attend the same college, and the mother’s possessive love is found all over the movie.  This movie also touches on the topic of parenting and motherhood.

This movie plot is in a village where Varun is newlywed. He is unemployed and faces all odds, and nothing seems working. Later his wife, Anushka, learned tailoring and was able to bring the village together to rejuvenate their stitching art. Finally, they could start their own garment business branded as made in India.

This is a fun movie to watch if you like the sequel of Yamla Pagla Deewana. The trio of Deol brother and their father Dharmendra, entertains their audience with natural fun acting. This movie revolves around how a big national pharmacy company hounded honest Ayurveda practitioner for his discovery of age-old formula to cures everything. All the sequel is equally fun, but this will make you laugh, so we suggest you watch this super fun, one of the best Bollywood comedy movies of 2018.

Karwaan is a thoughtful & intelligent film that is based on a road journey from Bangalore to Kochi by two friends – Avinash played by Dulquer Salmaan and Shaukat enacted by Irrfan Khan. The journey is not a planned trip but a trip for Avinash to get his own father’s body back that has been exchanged with some lady’s body. In this trip, they are joined by a young teenage girl, the lady’s granddaughter. The movie is an enjoyable experience that depicts every event of the journey thrillingly and excitingly.

Stree is a horror-comedy, and this makes the audience laugh. The people of a small town Chanderi live under the terror of Stree. Stree is an evil spirit of a woman who has attacked men at festive nights. This movie is filled with comedy when it displays their fear and reasoning and the urge to know the spirit. You can also explore the list of horror movies if that is your favorite genre.

This movie revolves around the character named Surya. He has a lifelong medical condition that makes him incapable of feeling or sensing the pain. During this discovery, there is a series of self-pity jokes and comedy, but he later determines to stand against his weakness. Soon, he started learning martial arts and turned his incapability to his abilities to help his biggest inspirational idol.

This is one of the best comedy movies of 2018. The protagonist, Akash, is a piano player played by Ayushmaan Khurrana, pretends to be a visually challenged young man. He lands in trouble when he accidentally became the witness to several problems, including the murder of a former actor. This movie is full of suspense, comedy, and fun.

This is one of the most anticipated movies of 2018. Sanju is a biopic of the thrilling life of the actor Sanjay Dutt. Ranbir Kapoor acts as Sanja Dutt, and as much as his acting is appreciated, Vicky Kaushal has just nailed the comedy and emotions in the movie. The movie Sanju encompasses Sanjay Dutt’s film career, personal life, jail sentence, and many more aspects of his roller-coaster life. This is undoubtedly one of the best comedy movies of 2018.

In the role of a police officer, Ranveer Singh played as Simmba in this movie.  He is a corrupt police officer, works an influential smuggler. But his life takes a U-turn when he was convicted to revenge a woman who was severely assaulted by that smuggler’s brothers.

This movie is a light mood movie with an excellent comic. The film derives its name from the staple north-Indian food Rajma Chawal and addresses every common household problem. The bittersweet relationship between a father and son is a treat to watch.

The father, played by legendry Rishi Kapoor, is trying hard to use social media to enhance his relationship with his modern son. This is one of the best comedy movies of 2018 for sure. You would not regret watching it.

This is a comedy movie which revolves around Jai, played by Jackky Bhagnani. He is an easy-going young man who does not understand the meaning of ambition and goal. He becomes the reason for his father’s biggest worry, and then he asked him to get married in the hope of making him a responsible person. However, everything started changing when he meets Avni, who is a beautiful, ambitious MBA graduate. The way the movie unfolds will make you laugh.

The fascinating & captivating plot of this movie is centered around a Christian girl, Maggi Obama, and a Muslim boy, Aman Osama. These two face obstacles to be together, and their ups & downs will be a roller-coaster of fun and laughter for you.

Nanu Ki Jaanu is a dark comedy that invites us to see the Delhi land mafia agent’s life. He meets and tries to rescue a woman who met with an accident. But the woman dies, yet her spirit arrives at Nanu’s apartment to seek help. The ghost and human interaction and fear will make you laugh.

This movie is exciting and comedy as well. A young woman played by Rhea Chakraborthy visits a place to explore and met a tour guide. They fell in love and decided to get married. They started facing problem when she became hesitant about her pregnancy. The movie takes another turn. You can consider the film in a light mood.

The protagonist, Rajiv, is an unskilled and desperate salesman. He is on the verge of losing his job if he doesn’t manage to sell at least one water- purifier by Friday. In the midst of all these, he has severe issues in his marital life. There comes the antagonist who is a skilled salesman who breaks in his house with another plan for him.

Soframycin: A Must Have In Your Medicine Box
Dalchini Benefits for Skin, Hair, Ailments & Other Diseases