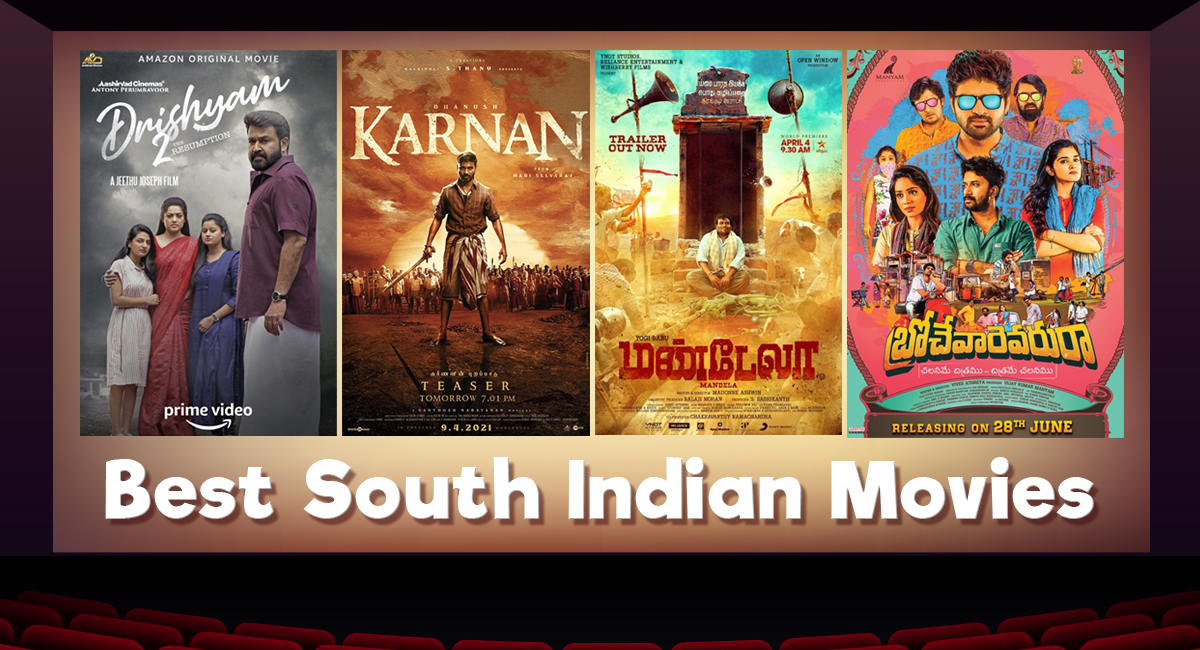 Finally, South Indian movies have started getting their dues. Once known as laid back film Industry, Tamil, Telugu, Malayalam and Kannada film industries have raised their bars in different genres with some of their top-rated flicks that have not only broken box office records in India bit across the globe. With the likes of Bahubali 1 and 2, several South Indian movies are giving good competition to other film industries. Also, many movies from the South have remade in Bollywood that itself says it all! Here we have combined a list of the best south Indian movies that one must watch. The good part, all these movies are available in Hindi as well!

Drishyam 2 is a sequel of 2013 released Drishyam which had the same star cast. The story of the second instalment starts after 6 years from where the story of its former part ended. Georgekutty, a cinema hall owner aspires to be a film producer. Though he has changed as a person but he can still go to any extent to protect his family. It is one of the best South Indian thriller movies. Due to the pandemic, the movie was directly released on Amazon Prime. This Malayalam film was released on  February 2021 and in March the dubbed version of this movie was released in Hindi.

This Tamil-language action drama film is a must-watch! Set in the small village of Tamil Nadu, the movie revolves around a young man, Karnan (Dhanush) who fights back for the rights of the villagers. It was one of the few Tamil movies that had a theatrical release. The movie went on to break many box office records and became one of the highest-grossing Tamil movies of 2021. Many movie critics reviewed Karnan as one of the best Tamil films of the year.

Mandela is yet another one of the best South Indian movies of 2021. The political satire, sets on the backdrop of the Village Panchayat Election, where the vote of a local barber can make any of the parties win the election. Owing to a nationwide lockdown due to Covid-19, this comedy Tamil movie was directly released on Star Vijay Channel and on the following day it was available on Netflix. The movie is available in Hindi as well for download.

This Rom-com Telugu movie is one of the top-rated South Indian movies of 2019. The film is about three intermediate students who plan to save a woman from her arrogant father but are caught in huge trouble. You can watch this movie on Amazon Prime. The movie also has its dubbed version in Hindi called Criminal Khiladi which is available on YouTube.

This Tamil Language Indian movie features Karthi in the titular role. Dilli, an ex-convict is supposed to meet his daughter for the first time after his release, however, in order to help a policeman in a drug case, his meeting is postponed. The movie does not have any songs but its background music is apt to keep its audience thrilled till the climax. Indeed this is one of the top South Indian thrillers. The movie is currently streaming Disney+ Hotstar.

This Neo Nair thriller revolves around a local traffic cop who accidentally discovers human bones and its investigation leads him to a 40-year old case that he determines to resolve! The movie also has its Hindi version and is one of the best south Indian movies dubbed in Hindi of 2019.

Asuran is a periodic Tamil action drama that concentrates on the struggles of a villager who has  to save his land and family. The film has Dhanush in the titular role. The movie was a Box office hit and was amongst 10 Indian films that were screened at the 78th Golden Globe Awards (2021). Asuran was remade as Narappa in Telugu in 2021. You can watch the dubbed version of this movie in Hindi on Amazon Prime.

Gantumoote is a Kannada language coming of age drama film that follows the life of high school teenager, Meera.  The 16-year-old girl falls in love with her classmate however, destiny has other plans for her! Gantumoote is one of the best South Indian love stories. It had a world premiere at New York Indian Film Festival and it also received the Best screenplay award in in New York Indian Film Festival and was the first Kannada film to receive an award in the same festival. This 2019, released movie is currently available on Amazon Prime

Agent Sai Srinivasa Athreya is one of the top-rated South Indian comedies of 2019. It is a humorous investigative thriller based on the adventures of detective, Agent Athreya. He owns a small detective agency- Fathima Bureau of Investigation in Nellore and solves small cases. However, things take a serious change when he is asked to investigate a murder case. You can watch it in Hindi as well on MX player.

This Tamil action-thriller is a must-watch. It is a story of Vikram, a hard-headed policeman, who is on a mission to capture Vedha, a gangster. However, he surrenders and tells him three stories that change Vikram’s perception of good and evil. The movie received several accolades and is one of the top South Indian movies. Vikram Vedha was also dubbed in Hindi.

In case you are up for a true action-packed movie that does watch Mufti. This Knnada blockbuster is one of the best south Indian movies of all time. Gana, a police officer is in the hunt of Bhairathi Ranagal, a crime lord but when he discovers that Bhairathi became a don in order to provide justice to villagers, he takes a major decision.

This is yet another best South Indian action thriller! Theeran Adhigaaram Ondru is a Tamil language movie. Inspired from the true events the movie revolves around an honest police officer Theeran Thirumaran. Despite of solving a spine-chilling dacoit murder case in the past, the officer has not been recognised by the government nor he is promoted instead, he is transferred to Traffic Vigilance Department

The plot of Thani Oruvan follows the challenges faced by IPS Officer Mithran in order to arrest a scientist who commits medical malpractices for the sake of money. It is one of the best South Indian thrillers of 2015.

This Tamil-language science fiction comedy film will keep thrilled till the end. The protagonist of the movie Elango and Pulivetti travels back into the time in the time machine and saves the life of the gangster due to which they get into trouble. Undoubtedly, this is one of the best South Indian comedies. The movie is also dubbed in Hindi for its Hindi viewers.

Set in the backdrop of North Madras, the plot of the Madras film revolves around two friends Kaali and Kaali, who is a political aspirant. Their friendship gets embroiled in the brutal political rivalry between two political parties. The movie received critical acclaim and praised for its technical aspects. It also won ix 4th South Indian International Movie Awards and several other accolades.

This psychological action thriller film is about a schizophrenic musician, Gautham who is in the hunt for his parent’s murderers. This Telugu movie received a positive review and was a hit at the Box movie. The flick is also dubbed in Hindi as1-Ek Ka Dum.

This Telugu movie revolves around five principal characters i.e. Raju, Saroja, Ramulu, Vivek Chakravarthy and Raheemuddin Qureshi who become victims of a terrorist attack in a hospital. The movie was critically acclaimed and received several accolades including Filmfare Awards.

This political drama received many rave reviews from critics. After the death of Andhra Pradesh’s Chief Minister, his son Arjun Prasad becomes the next CM of the state and takes a plunge to make the political system corruption less and casteless. A leader is one of the best South Indian movies. The movie is currently available on YouTube along with its dubbed version in Hindi as Rajyudh.

Anniyan is one of the top-rated psychological action thrillers. The movie follows the life of Ramanujam, who is dealing with multiple personality disorders. He follows ancient Hindu scriptures, Garuda Puranam in order to punish wrongdoers and raise civic awareness.

Okkadu follows the life journey of a Kabbadi champion who rescues a woman from an unwanted marriage that lands him in trouble. The movie was remade in various languages including Tamil as Ghilli and Hindi as Tevar. The film was lauded for its storyline.

In the last few decades, South Indian movies have raised their bars with top-notch storylines and technical aspects. Above we have coupled a few top-rated South Indian movies that are dubbed in Hindi. These movies are available on most OTT channels.

1. Where can we watch south Indian movies online?

Sultan, Master and Karnan are to name a couple of new South Indian movies.

3. Which is the No.1 South Indian movie?

Above we have curated a list of the best South Indian movies that include Drishyam 2, Indru Netru Naalai and Kavaludaari.