Hollywood Comedy Movies in Hindi that will Lighten-Up Your Mood 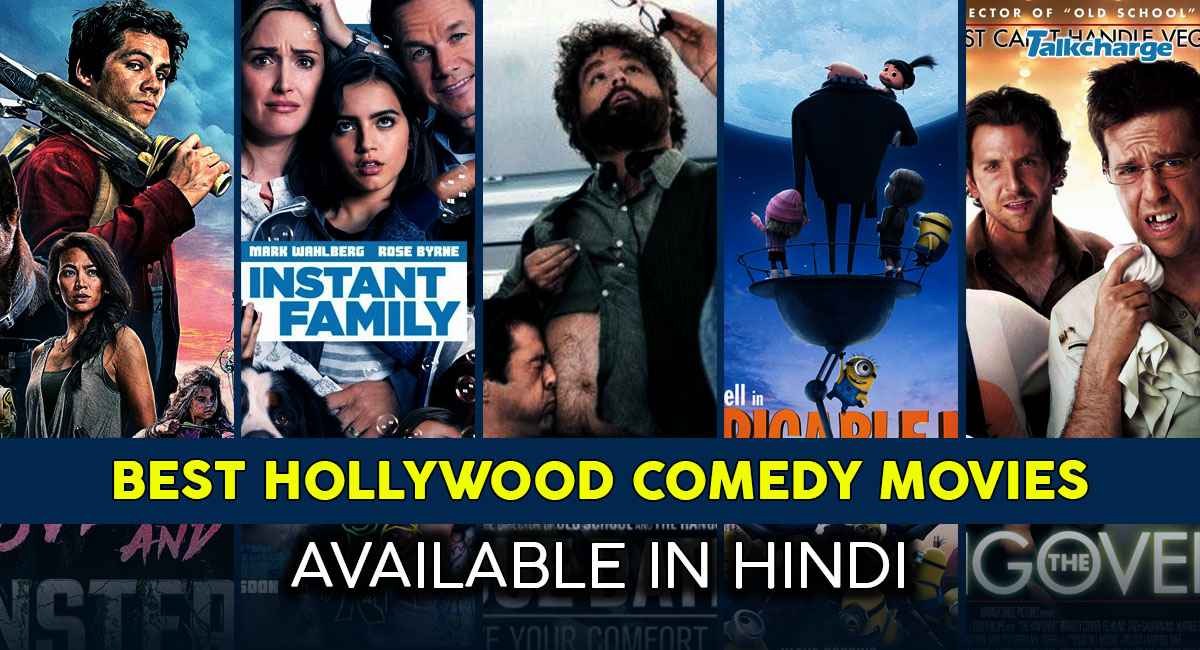 ”Laughter is the best medicine ‘and what could be best than watching a good comedy! Comedy is one of the most explored genres in Hollywood. Hollywood has given us a number of mind-blowing comedy movies with ace comedians like Will Ferrell, Jim Carrey, and Zach Galifianakis and the legendry Charlie Chaplin. Thankfully, most of these movies are available on digital platforms where all the movie buffs can watch them. Interestingly, many Hollywood comedy movies are also dubbed in the Hindi language, making them accessible for Hindi-speaking audiences. Below we have curated a list of 15 Hollywood comedy movies in Hindi that would make a perfect watch for distressing!

For the people who love to watch action-packed comedies, Love and Monsters is a suitable option. Owing to the global crises we are facing due to the pandemic; this is the right time to watch this movie. It follows the life of Joel Lives (Dylan O’Brien), who tries his best to save his colony from Monsters. In his mission, he gets support from a stray dog named “Boy, who time and again save him from the monsters attack. With a few serious scenes, the audience will see a number of fun moments that definitely add charm to the movie.

The title of the movie will tickle you at first! Pete (Mark Wahlberg) and Ellie Wagner (Rose Byrne) are a childless couple who are ready to adopt a kid. They visit a foster care centre to meet foster kids, where they meet 15-year-old Lizzie, who impresses the couple. At first, the couple is hesitant in adopting a teen, but they like Lizzie, and just when they are ready to adopt her, they find Lizzie has two siblings and her mother in jail. This follows a series of humorous and serious moments that would keep you intrigued until the end, where the couple finally adopts three of them, leading to ‘Instant Family. You can watch this movie on Amazon Prime.

If you are a huge fan of Zach Galifianakis comedy and even if you haven’t watched him much, do watch this movie, and you will understand what a great comedian and actor he is. The movie also has Robert Downey Jr. The story of the film follows a road trip where a to be a father is trying to reach on time to be present at his childbirth. He accidentally meets a co-passenger in the way, both being protagonist and unwilling to travel together, are forced to share their journey due to various amusing circumstances. The USP of this movie is the road trip itself, where one after another goof-up takes place, leaving the audience grin from ear to ear.

Despicable Me is one of the best comedy movies in English, and currently, you can watch it in Hindi on YouTube. Directed by Pierre Coffin and Chris Renaud, it is one of it’s a kind movie that introduced us to the minions. It concentrates on the animated character Gru, played by Steve Carell, who can go to any extent in order to steal the Earth’s Moon. In order to accomplish his mission, Gru adopts three girls and prepare his squad of minions. The movie is a fun ride for all age groups! You can watch it on OTT platforms like Netflix. Owing to the movie’s success, the makers introduced a multimedia franchise and series of prequels and sequels.

What would a set of male friends do at a bachelor party? In most cases, they will get drunk and enjoy the night like never before, waking up the following day with a hangover. The same happened with four friends Phil (Bradley Cooper), Stu (Zach Galifianakis), Alan (Zach Galifianakis) and Doug (Justin Bartha), who travelled to Las Vegas for a bachelor party. But there is a twist in the story-the three friends woke up and found the soon to be groom, i.e. Daug missing.

What comes next is a sheer fun ride for the audience when the three begin searching for their lost friend. A series of complications and unknown characters (who they met last night) make their way, leaving the audience laugh unapologetically. This is definitely one of the best Hollywood comedies and the best part is it is also available in Hindi. You can watch it on Netflix. The movie has two sequels that have similar stories but with a different backdrop.

If you like watching horror comedies, then Zombieland would be a perfect addition to your list of Hollywood comedy movies to watch in Hindi. Besides your liking of this subgenre, the ongoing pandemic will help you to relate to the film. The movie is about a strain of mad cow disease and its effects on the lives of people. The strain mutated into “mad person disease” that later became “mad zombie disease”, which infected many parts of America. However, it is quite different from the Coronavirus, but a virus is a virus. While giving you some horror shocks in between, the movie will make you laugh continuously.

Superbad is yet another must-watch Hollywood comedy movie, and you can download its dubbed version in Hindi as well.

The movie features best friends Seth (Jonah Hill) and Evan (Michael Cera), who have been inseparable since they both were equally unpopular but soon have to go through the ordeal of attending different colleges. Superbad represented a break from conventional teen movies. It is a timeless piece that unravels the state of every teenager in a funny manner. Superbad is currently available on Amazon Prime and Netflix.

The 40-Year-Old Virgin has one of the finest Comedians, Steve Carell (Andy Stitzer), in the titular role, which makes one of the reasons why this is the best Hollywood comedy movie and thankfully, it is available in Hindi on YouTube.

As the title of the movie states, it is the story about a 40-year-old adult who is still a virgin, lives alone and has a good collection of video games and action figures. Knowing the fact that he is a virgin at this age, his colleagues help him in every possible way to lose his virginity. This follows a series of funny moments that would surely keep you glued to the screen while making you laugh through the tears.

This American movie was a box office success and is amongst the highest-earning R-rated comedy of all time.

Known as one of the best comedy Hollywood movies of the 2000s, Anchorman: The Legend of Ron Burgundy is next on this list. The movie lays a satire on the format of the 70’s action news. The film is precisely based on the life of the anchorman Ron Burgundy (Will Ferrell), who works at a local San Diego television station, and his rivalry with his co-anchor-Veronica (Christina Applegate).  This hilarious newsroom drama will make you forget all your stress while transporting you to the different world of journalism. The movie also has its sequel, Anchorman 2: The Legend Continues that released in 2013

This cult classic has to be on your watch list of the best Hollywood comedy movies in Hindi. With the ensemble star cast like Jennifer Aniston, Ron Livingston, Stephen Root and Gary Cole, the film promises to give you the best of the moments that would instantly cheer up your mood. The story follows IT workers’ office life and addresses themes like white-collar and other employees. The movie is available on various digital platforms, and you can buy its DVD.

No list of best Hollywood comedy movies is complete without the ace comedian Jim Carrey’s movie! One of the cult classics, Dumb and Dumber, is a perfect watch to burst all your stress. This American Buddy Comedy follows the life of two friends Lloyd Christmas (Jim Carrey) and Harry Dunne (Jeff Daniels), who embarks on a madcap cross-country road trip to return a briefcase full of cash to its owner. The USP of the movie is its humorous punches that would surely make you burst out laughing. Interestingly, this Hollywood comedy movie is also dubbed in Hindi, and you can watch it on one of the best OTT platforms, i.e. Netflix.

Next on our list of must-watch Hollywood comedy movies in Hindi is Four Weddings and a Funeral. With the unusual title, this British Comedy movie assures you to take you on the joy ride. The story revolves around Charles (Hugh Grant) and Carrie (Andie MacDowell), who meet each other at four weddings and one funeral before marrying each other. It was the highest-grossing film of the year. It also bagged a nomination for Best Picture and Best Original Screenplay in Academy Award.

Ghostbuster is yet another one of the best Hollywood Comedy movies, and now it is dubbed in Hindi as well. The movie received critical acclaim and went on to become a cultural phenomenon. It was liked for its blend of comedy and it hasn’t lost its charm yet. The movie’s success also led to the introduction of the Multimedia franchise that included famous series like The Real Ghostbusters and Extreme Ghostbusters. The film also got two nominations in the Oscars.

The movie revolves around three former parapsychology professors who start unique ghost removing services. Whether they succeed in removing ghosts from the city of New York or are trapped in their own world, watch the movie on Netflix to find out the answer.

In this age of coloured cinema, if you are up for a black and white classic, then Some Like It Hot would be a perfect addition to your watch list. Starring Marilyn Monroe, the hottest actress of her time, along with Tony Curtis and Jack Lemmon, Some Like It Hot is one of the best Hollywood movies and is now available in Hindi as well. The movie is all about two musicians dressed up in drag in order to hide from Gangsters who they saw committing Saint Valentine’s Day Massacre.

It was of its kind a movie as it was the first movie to showcase Homosexuality. The movie will surely leave you rolling on the floor with its humorous dialogues and award-winning storyline. It is considered to be one of the greatest movies of all time and was also nominated for Academy Awards.

Talking about Hollywood Comedy movies, the first person that comes in our mind is Charlie Chaplin. The legendry comedian has a number of films to his fame, amongst which The Great Dictator tops our list of Hollywood comedy movies in Hindi. The movie is not only directed by the legend, in fact, it is also been penned by him and, but he has also played a significant part. This satirical comedy-drama is a funny take on the fascism that was prevalent during Adolf Hitler’s dictatorship.

This decades-old movie still has a charm which will surely make you fall in love with classic cinema, and since it has Chaplin, you cannot ask anything more! The movie is available on Amazon Prime. You can also watch this Hollywood comedy movie dubbed in Hindi and other languages.