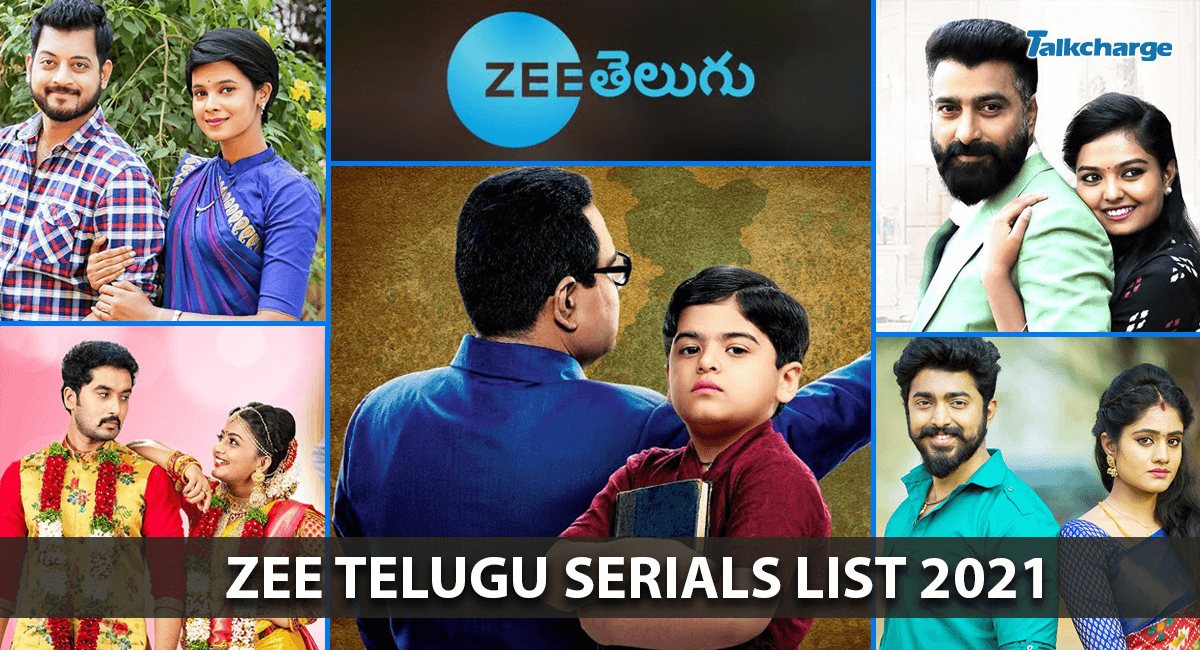 Starting in the year 2005, Zee Telugu is a regional language entertainment television channel that was formerly known as Alpha TV Telugu. The channel initially broadcasted English movies dubbed in Telugu and gradually introduced a series of TV serials of different genres. With a wide range of serials and shows, the channel is now known as a complete family entertainer. For all the ardent viewers searching for today’s channel schedule, here we have presented the Zee Telugu serials list 2023 with time and synopsis.

Hitler Gari Pellam is the latest one in the Zee Telugu serial names list. This television drama series revolves around Hitler and his wife Bahnumati, who are like chalk and cheese. The show is inspired by the former Zee TV serial- Guddan – Tumse Na Ho Paayega. Hitler Gari Pellam is telecasted in the afternoon slot and promises to cheer you up with its intriguing story. This Zee Telugu show was originally released on 17 August 2020 and last aired on 22 January 2022.

Next on our list of Zee Telugu serials is Oohalu Gusagusalade. The family drama premiered on 10 May 2021 and is a remake of a Zee TV former TV series Punar Vivaah – Zindagi Milegi Dobara. It airs in the afternoon slot between 1 to 1:30 PM (Friday & Saturday). The show is about two parents, i.e. Akul Balaj and Roopa Shravan, who have lost their spouses, and in order to give them a good life, they are compelled to marry each other.

Zee TV Telugu serials list of today includes Gundamma Katha in its afternoon slot. Starting in the year 2018, it is one of the oldest TV series on the channel. It has completed over 800 episodes. Gundamma Katha revolves around an overweight girl Geetha who is regularly taunted and teased for her weight. On the other hand, Ram dreams of marrying a beautiful girl. However, fate has other plans, and these two are forced to marry. The Gundamma Katha serial timings are at 1:30 PM (Monday – Saturday) and you can also watch them to know whether Geetha and Ram will accept each other or will get separated?

Starting in November 2020, Inti Guttu is one of the popular names in the Zee Telugu serials list 2023. The timings of the serial are 2 PM to 2:30 PM and is telecasted from Monday to Saturday. The show is the remake of the Zee TV popular show Tujhse Hai Raabta. The TV series is a life journey of a teenager Kalyani, who lost her parents at an early age and is forced to live with her paternal family. Her life turns upside down when she is forcefully married.

Mithai Kottu Chittemma is one of the Zee Telugu new serials. The drama revolves around Chittemma, a young woman who owns a sweet shop and is married to the son of Kanthamma, a politician, who she does not like. It would be interesting to see how the life of Chittemma changes after her marriage. It started in March 2021 and is telecasted at 2:30 PM from Monday to Saturday.

Vaidehi Parinayam is one of the latest serials on the Zee Telugu channel! It started in July 2021, and within a few months of its launch, it has become one of the channel’s most-watched shows. The TV series explores the life journey of a young woman, Vaidehi -how she marries her sister’s fiancé and the ordeals she has to go through while adjusting to the new relationship. Vaidehi Parinayam’s serial timing is 3:30 PM to 4:00 PM. You can watch this Zee Telugu serial live today from Monday to Saturday on Zee 5 to find out what next happens in Vaidehi’s life.

Muddha Mandaram has been one of the top programs shown by the Zee Telugu channel. The drama went on air in November 2014, and it was last telecasted in December 2019. The show enjoyed a huge viewership and was in demand by its viewers, and the old episodes of the serial are re-telecasted at 3:30 pm (Friday to Saturday). The daily soap was about the life journey of Deva and Parvathy.

Mutyala Muggu is yet another name in the Zee Telugu serials list. The story of the serial revolves around the strong-headed girl, Abhinaya, who runs her family, which has her mother, sisters, and brother). All she wants from her life partner is support and to let her financially back her family even after marriage. But fate has other plans for her. Will she get a suitable boy who will understand and support her, or will someone trap her?

Starting in 2018, Tenali Rama Krishna is a historical comedy-drama series. The show was originally broadcasted on the Hindi entertainment channel SAB TV. It explores the life journey of legendary Telugu poet Tenali Ramakrishna. Tune in to the channel at 4:30 PM (Monday, Tuesday, Wednesday, Friday, and Saturday) to know what Tenali is up to.

Mana Ambedkar is a dubbed version of a well-known Hindi serial- Ek Mahanayak-Dr. B. R. Ambedkar. This Zee Telugu serial explores the real-life chronicles of Baba Saheb Dr. Bhimrao Ramji Ambedkar’s life, how he strives for humans’ basic rights, and went on to become a Father of the Indian constitution. The serial is also available on Zee 5 that too before it’s telecast on the channel.

This is the latest addition to the Zee Telegu serial list. The program takes you through the life of Kundana and the challenges that she faced in guarding Samanthakamani, an exclusive piece of jewelry that her father designed.

The latest drama to be added to the Zee Telugu serial list is Krishna Tulasi. The soap opera concentrates on the struggles of young girl Shyama. She is a talented and strong-headed girl who is preyed upon by society due to her dark skin tone. But, her life changes drastically when she makes a mark in the music industry.

Radhamma Kuthuru is also a part of the Zee Telugu serials today schedule. The daily soap is all about the hardships of a middle-aged woman whose husband has abandoned her. She fights against all the odds to give her daughters a good life. On seeing her struggle, her daughter Akshara pledges to give her mother all the happiness that she is worthy of. Will Akshara be able to reclaim her mother’s lost honor? To find out, watch this TV serial on Monday, Tuesday, Wednesday, Thursday, Friday, and Saturday at 07:00 PM only on the Zee Telugu channel and Zee 5.

Next on our list of Zee Telugu serials list is Naga Bhairavi. This fantasy soap opera features Pawon as Nagarjuna and Yashmi Gowda as Bhairavi in the leading roles. Unknown to their past, both Nagarjuna and Bhairavi are connected with the temple of cobras. This supernatural television series premiered on 12 October 2020, and since then, it has garnered colossal TRP, making it one of the most-watched serials on the Zee Telugu channel.

Today’s Zee Telugu serials also have No. 1 Kodalu, which features Sudha Chandran as Vagdevi, Dhanush as Kranthi Chand, and Madhu Mitha as Saraswathi in the pivotal roles. Saraswati lost her mother at a young age, and in order to look after her mentally challenged sister, she quits her school and takes up a meager job. Years later, she is married to the son of a leading businesswoman – Sudha Chandran, who changes her fate. With ace actors like Sudha Chandran, the show is receiving immense love from the viewers. Tune in to the Zee Telugu channel to watch the latest episodes of the serial.

Trinayani is a remake of a popular Zee Bangla serial that had the same name. The TV drama concentrates on a young girl Nayani who has the power to foresee the future. She has been brought up by her grandfather, who believes her abilities to be the gift of goddesses whom they worship. Nayani tries her best to help others, but it all goes in vain as people assume she as a bad-mouthed person. Will she be able to gain the trust of all the villagers and lead a happy life? To know this and lots more, watch the Trinayani serial today on Zee Telugu TV.

Zee Telugu serials list also has Prema Entha Madhuram, which has become one of the top-rated daily soaps. The TV serial is currently ruling its audience’s hearts by showcasing an intense love story between both the leading characters- Anu and Aryavardhan, with exciting twists. Owing to the show’s unconventional story, both Sriram and Varsha enjoy a huge fan following on social media.

Kalyana Vaibhogam premiered in 2017 and is one of the longest-running Zee Telugu shows. The daily soap showcases two girls’ lives- Nithiya and Manga, who are look-alike but different by nature. Nithiya is innocent and married to an influential family; her life takes a turn when her duplicate enters her family with bad intentions. Do watch the serial if you do not want to miss the upcoming episodes.

This program centers on a young girl Surya who turns into a tom-boy in order to take care of her family after her father’s death. In the event, Surya falls in love with her friend Chaitanya who is engaged to her sister. Unaware of this fact, Surya plans to propose to him. What do you think will Chaitanya accept her proposal or marry her sister? To know this and lots more, keep watching this Zee Telugu serial.

Sa Re Ga Ma Pa – The Next Singing Icon is one of the longest-running shows on Zee Telugu. The judges of the show are Koti, S. P. Sailaja, and Chandrabose. The show has 20 participants, among which Kondepudi Yasaswi is the winner if you have missed any episode of the show, you can watch it on Zee 5 or the channel at 8 PM and 10 PM on Thursday.

The Zee Telugu channel has become one of India’s most-watched regional channels, showcasing various genres of TV serials. The channel is available on Dish TV, Airtel digital TV, Videocon d2h, and other leading DTH platforms. TV serials like Radhamma Kuthuru, Naga Bhairavi, and many others, to name, have, over the year, appealed to audiences irrespective of demography and age groups. Here we have provided the complete Zee TV serials list and timings that you can watch on this channel and enjoy their appealing stories.

1. Which serial has the highest TRP in Zee Telugu?

In the programs shown by Zee Telugu, Trinayani enjoys the highest TRP.

You can watch Zee Telugu serials online on OTT platforms like Zee 5, Airtel Xstream, and YuppTV.

3. Which is the No one serial in Zee Telugu?

Currently, Radhamma Kuthuru is the number 1 serial on Zee Telugu.

4. Who is the owner of the Zee Telugu channel?

5. What is the time of Hitler Gari Pellam television show?

This soap opera is broadcasted at 12:30 PM on Friday & Saturday.

7. What is Trinayani serial timings?

9. What are the new serials in Zee Telugu?

10. Where can I watch Zee Telugu serials full episodes?

You can watch the full episodes of all Zee Telugu serials on Zee5.

11. What is Radhamma Kuthuru serial timings?