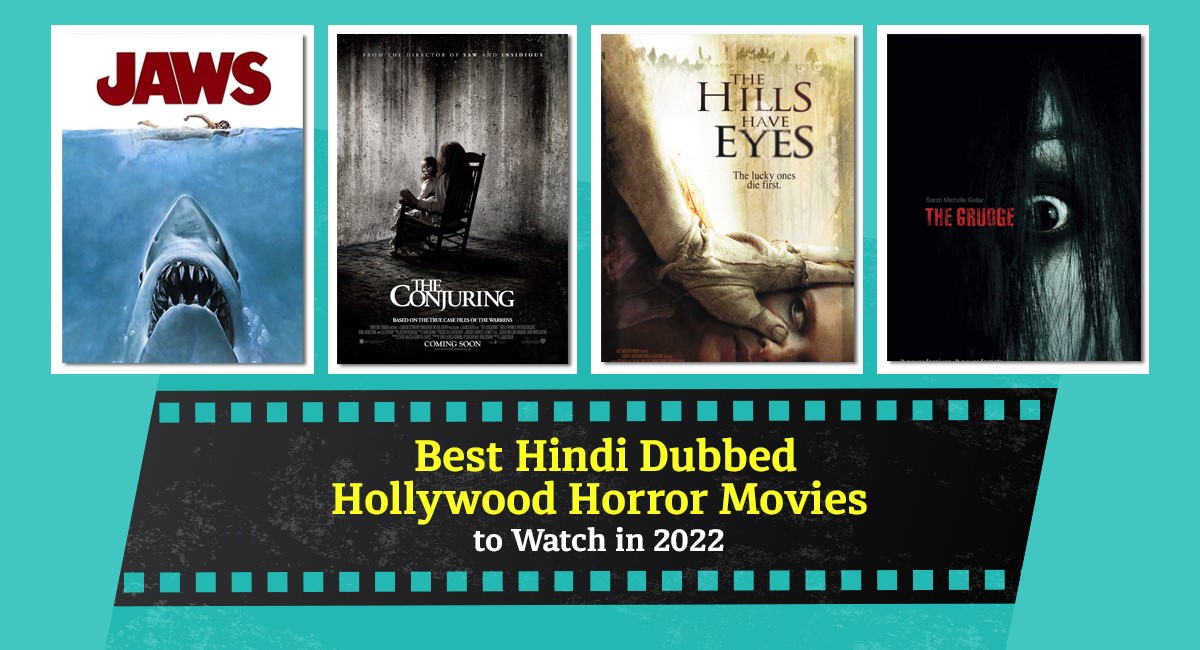 This is one of the all-time best adventure horror movies. A huge white shark terrorizes the fishing community and attacks boasters and swimmers for several days in the summers. Jaws was the 7th highest-grossing film of that year in the US and Canada. Seeing its popularity, the movie was also dubbed in Hindi and was well received by the Hindi audience.

Based on real-life incidents, The Conjuring is one of the best Hollywood movies that one should watch. Besides English, the film was also released in other languages, including Hindi and the regional language. The story of the movie revolves around the family, who is convicted in a haunted house. The film was a blockbuster, and so was its Hindi version. The movies had its sequel that was released in the year 2016.

Like its prequel released in the year 2013, The Conjuring was based on paranormal activities and is one of the best Hindi Dubbed Hollywood Horror movies to watch. It showcases 1977 haunted incidents with the Hodgson family. The movie has an array of teeth biting scenes that would give you goosebumps. The sequel also has both the main characters.

Mama is a supernatural horror film based on the two girls who were forced to live in the Jungle house. This is one of the top-rated horror movies of the year 2013. The movie was also dubbed in Hindi to entice its Hindi audience. Do watch this movie if you love to watch supernatural powers. This movie would scare you like anything!

Released in Hindi and other languages, The Hills Have Eyes revolves around the unfortunate event that a family has to go through on their way to California. The movie was adapted from the legend Alexender “Sawney” Bean, who had a group of 40 people who killed more than 1000 people who lived in caves.

The American psychological horror drama film revolves around a couple and their daughter. A stranger forces the couple to believe that their daughter is his reincarnated daughter. The movie is based on the novel with the same name that was introduced in the year 1975. The novel was written by Drank De Felitta, who also did the screenplay of the movie.

7. The Town That Dreaded Sundown

Next in our list best Hindi dubbed Hollywood horror movies is The Town that Dreaded Sundown. The real-life event inspired the film. The story of the movie centers around the man called Texas Ranger, who is in a hunt of the serial color who has taken the lives of many. What hooked the audience to the movie was the fact that the killer is never caught. This created curiosity amongst the audience and made it one of the blog busters of that very year.

Identity embraces the story of 10 strangers who unite with each other when they realize that they would be soon killed one after the other. This is one of the top-rated Hindi dubbed Hollywood horror movies, and if you have not watched the movie yet, do watch in the preferable language.

The Grudge is the remake of one of the Japanese top-rated horror movies called JU-ON. The film centres on am American Nurse who works in Tokyo. The nurse is exposed to a mysterious supernatural curse. Owing to the success of the movie, The Grudge had two sequels released in 2006 and 2009.

The Woman in Black is a British supernatural horror movie that has been adapted from the novel- The Women in Black. The movie centers on the traveller who travels to the remote villages. On one of the trips, he discovered the vengeful ghost of the women that was terrorizing the entire village.

The story of the movie focuses on the loan officer who evicts older women from her home. Subsequently, the women explore the recipient if the supernatural curse and tries her best to save the soul. The movie was critically acclaimed at the Cannes Film Festival. Also, it won many prestigious awards for the heart- trenching performance and story in the same year.

The American horror film revolves around two men who are caught in the hotel room, and unfortunately, both the boys do not remember how they managed to get into the room. After a couple of episodes, they find that they would have to solve the riddle in order to escape from the room. The movie keeps its audience hooked in every scene. Do watch this movie.

The Cabin of Woods is about five friends who plan to go on the break. On their trip, they find a remote cabin that was no less than bliss for them. However, soon they discover the reality of the cabin. The movie earned many prestigious awards in different categories. It also received an award for the best screenplay in the year 2013.

On the day of Halloween, many people experience ghastly episodes and find that their lives are connected in some way. The story narrates the five different stories that occur on the same day. Do watch this movie, and the amazing acting of the actors would blow you.

Formerly named as Mirrors, Mirror is one of the classic Hindi dubbed Hollywood horror movies. The story turns around an ex-cop and his family who experience a few episodes that prove that the evil force has attacked them. The mirror is a gateway passage for the evil force. After a few days, the family suffers paranormal activities and realize that the evil force is after their lives. If you want to get stunned, do watch this movie at midnight.

You may also like: Watch Best Bollywood Horror Movies

Rec is the sequel to the Spanish Horror movie with the same name. The movie’s pivotal character is a medical officer who stuck in an apartment along with his team. Along with his team, the office enters into the quarantined building where the virus has turned its residence into the monster.

The Uninvited is a psychological horror movie that was a remake of 2003 released Korean film –A Tale of Two Sisters. One of the sister-Anna comes back home after a long time after getting recovered. However, her recovery is affected by her stepmother. Soon Anna and her sister take upon her to take revenge on their mother’s death.

In case you want to indulge in the horror movies that have real stories than do watch Poltergeist. It is one of the classics, and thankfully, it is released in other languages, including Hindi. It is a story about a family whose home is invaded by the ghosts, and soon their youngest daughter is also trapped by the devil. It is one of the intriguing horror movies that will surely haunt you for days after watching the movie.

Listed as one of the best Hindi dubbed Hollywood Horror movies, Rosemary is a delight to watch. The English novel inspires this horror movie with the same name written by Ira Levin. The film moves around a pregnant woman named Rosemary, who finds that her husband has been associated with the religious cult. Soon the lady realizes that the birth father of her baby is evil. It is one of the oldest Hindi dubbed Hollywood horror movies.

Inspired from one of the best books- Elephant can remember, Alone is a story of PIM who moves to Korea from Thailand. The boy was separated from his sisters at a very early age. However, in order to keep her promise, his sister comes back in his life in an uncanny way.

The Ruins is about a group of friends who are on their holiday in Mexico Soon, their trip is spoilt with the ghastly attack, and they experience an evil around them. This is one of the cult classics that is a must-watch.

It is an American Anthology that has been one of the top-rated Hindi dubbed Hollywood horror movies that you must watch in 2022. A guy finds out an extraordinary tap where he finds a dead body and old televisions and cryptic footages. It is one of the best horror movies of the year and won many accolades for the same.

This is the remake of the 1984 release thriller that had the same name. The movie is set in Ohio. The story revolves around five friends who are killed one after the other. The film is a revenge thriller that centers on Freddy Krueger. This supernatural story will surely haunt you for many days to come. Do consider this movie on the upcoming weekend.

What made this movie in our list of top-rated Hindi dubbed Hollywood horror movies is its storyline, which is very appealing and scary. It is a story about the woman who, after a long time, comes back to her home country. On her visit, she is trapped in her house itself. It is also one of the best-haunted movies in Hollywood. The Hindi version won many accolades.

Paranormal Activity 2 was dubbed in the Hindi language in the same year for the Hindi audience. The story of the movie is based on paranormal activities. It is the sequel of the film with the same name that released in the year 2007. The family installs spy cameras in the home, and one fine day they find realized that the events unfolded are sinister.

While Bollywood has many fabulous horror movies, nothing can compete with Hollywood horror movies. They have real drama and screenplay. And thankfully, most of them are available in Hindi as well. In this blog, we have curated a list of 25 Hollywood horrors that are dubbed in Hindi. Do watch these movies and share your reviews. After watching horror movie, do watch a comedy movie to uplift your mood.