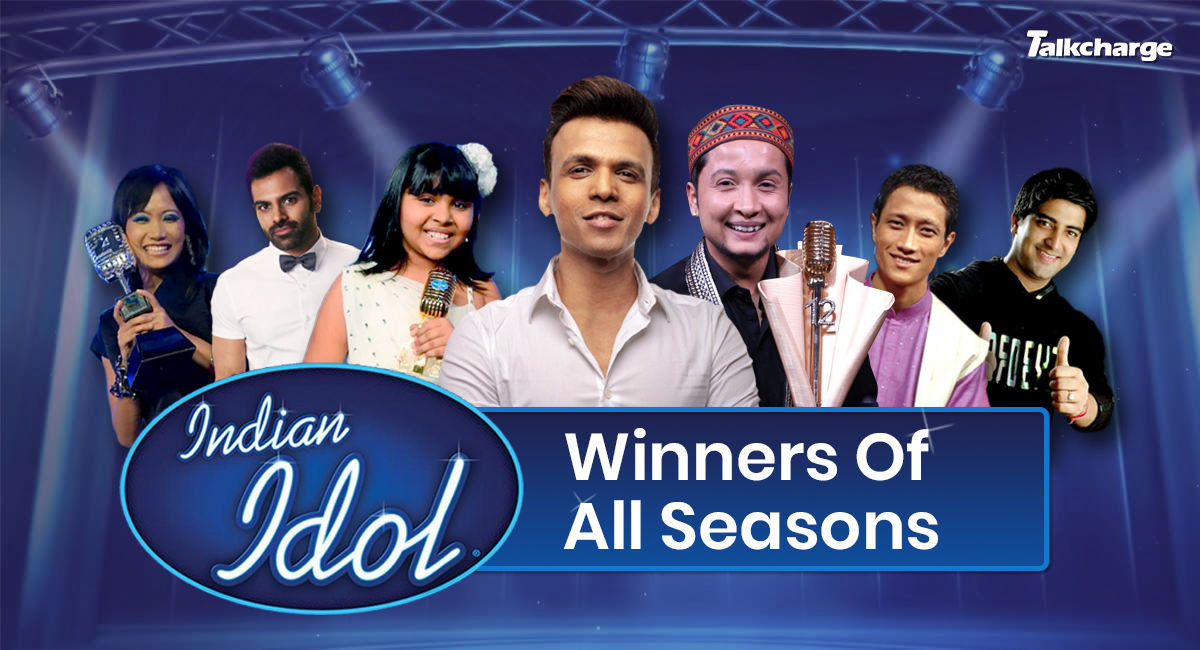 Indian Idol is a singing reality show inspired by American Idol, which gives a stage to singers all across the country to show their talent. It started in 2004, and the craze for this show grew with time. Throughout the seasons, we have seen the contestants’ meteoric rise and life-changing stardom. Indian Idol does not only focus on the singing but on the holistic personality of the contestants. Many singers like Abhijeet Sawant, Neha Kakkar, Monali Thakur, Salman Ali, and others are great assets for Indian Playback Singing. Here we have curated the Indian Idol Winner List of all twelve seasons, where you can also know more about the prize money, where they are now, runner-ups, prominent contestants, and more.

All You Need To Know About Indian Idol Winners

The young singer, Pawandeep Rajan, got the inspiration to become a singer from his home. His father, Suresh Rajan, is also a singer and sings at various functions in Uttrakhand. Pawandeep won the hearts of the audience and judges from the show’s beginning. Besides singing, he plays musical instruments like table, guitar, keyboard, piano, and Dholak.

Before making it to the Indian Idol, Pawandeep also won ‘The Voice of India’ in 2015, post which he released his debut single ‘Yakeen’ with Universal Group in the same year. The talented singer has also been part of many singing-based shows in India and Dubai. He has also sung in the movie ‘Romeo N Bullet’.

From the railway platforms of Bathinda to the highest singing platform in the country, Sunny Hindustani is the latest addition to the Indian Idol winners list for 2019-20. His fresh voice was well received by the audience and bombarded with many votes. He raised the trophy and signed a song contract with trio music composer Shankar Ehsaan Loy.

Sunny used to polish shoes at the Railway Station of Bhatinda, and he had to borrow money just to give an audition for Indian Idol. One can’t hide talent under the rug for long, and Indian Idol Season 11 displayed this saying.

With a unique and raw voice, Salman Ali was the Indian Idol winner for Season 10. He received prize money of ₹25 lakh and a Datsun Go car. This show put him in the limelight of the Indian music industry. He was also the runner-up of Sa Re Ga Ma Pa L’il Champs 2011.

After the life-changing victory in Indian Idol, the Indian Idol 10 winner made his playback debut with the song ‘Sab Badhiya Hai’ from one of the best Bollywood movies of 2018, Sui Dhaga-Made in India. He has also given his voice to the theme song of the well-known historical TV Show ‘Chandragupta Maurya.’ Recently we have seen him as a mentor for Superstar Singer.

Revanth made it to the Indian Idol winner list in 2017. This talented and famous singer has participated in more than 11 singing reality shows and won most of them. But winning the Indian Idol title was the apex of success in his career.

Post this victory, he sang more than 200 songs in Kannada and Telugu films. His song for Baahubali: The Beginning is a remarkable piece of work for this superstar of the South.

Indian Idol 8 was for junior talented singers and the show was named Indian Idol Junior Season 2. This time, the Indian Idol winner was a Bubneshwar girl, Ananya Sritam Nanda, who won ₹10 lakh and the opportunity to work with Universal Music India for two years. This Indian Idol season 8 winner was also among the top 5 contestants in the Rising Star singing reality show.

Her mesmerizing voice attracted the attention of prominent personalities of the country, including our Prime Minister Narendra Modi, CM of Odisha Naveen Patnaik, and famous singers.

The industry welcomed her with arms opened wide; her first album was ‘Mausam Mastana’ and later sang for ‘M.S. Dhoni: The Untold Story’, which is a famous inspirational Bollywood movie.

The first Indian Idol Junior winner was Anjana Padmanabhan, and she ruled the season with an extraordinary voice. The judges always looked forward to her singing. She stole the show on the finale episode and made it to the Indian Idol winner list.

This Indian Idol 7 winner started learning Carnatic music at a young age. She later participated in the Star Vijay TV show – Super Singer 3, where she was among the top seven contestants. But she reached the apex musical journey after winning the title of Indian Idol winner. Recently we saw her performing in the singing reality show Taare Zameen Par on Star Plus. Along with that, she participated with her beautiful voice in Ram Darbar. Anjana was also chosen by UNICEF India to feature in a campaign centered on child rights in COVID-19.

Vipul Mehta is an Indian Idol 6 winner who became an influential singer. With no singing background, he started learning classical singing when he was 8. Before Indian Idol, he was the runner-up of another reality show named Amul Star Voice of India 2. Later he worked with other Indian Idol 6 contestants on the album Fabulous Four. In Kaun Banega Crorepati season 6, he surprised Amitabh Bachchan with an opening birthday song when he turned 70.

Indian Idol season 6 winner is an ambitious singer who aims to carve his niche in Bollywood. He works as an Indian playback singer in many movies and albums like Pukaar, Hello Namaste Sat Sri Akal, Vande Matram, and more.

Indian Idol 2012 contestants list has names like Amit Kumar and Devender Pal Singh, who were the finalists.

Sreerama is one of the few Indian Idol Winners who hail from Southern India. This season hosted by the former winner, Abhijeet Sawant, is still among the best seasons, as remarked by Amitabh Bachchan. Sreerama won ₹50 lakh as prize money and received TATA Winger’s keys and a music album contract.

He has sung many songs for well-known movies, including ‘Subhaanallah’ for the movie Yeh Jawani Hai Deewani, ‘Allah Duhai Hai’ from Race 3 and more. Indian Idol 2010 Winner also won the best music debut for Rehnuma in GIMA 2011.

The first female Indian Idol winner is a girl from Tripura named Sourabhee. With her beautiful smile and melodic voice, she gradually reached the finale and came out victorious. She won ₹1 crore, TATA Winger, and a contract for her first album, Meherbaan. She has a unique Guinness World Record of singing upside-down for 4.5 minutes.

Later the Indian Idol season 4 winner did national and international stage shows. She was in the role of judge for a singing reality show, Voice of North East. Recently, she organized a webinar titled ‘A way onward’ to help people lead a focused and stress-free during this pandemic.

This season was the first time a contestant from the northeast was recorded in the Indian Idol winner list. As prize money, Prashant Tamang won ₹1 crore, Maruti Suzuki SX4, and an album contract. His album Dhanyavad was gratitude displayed towards his friends and family who supported him to reach this height in singing. Indian Idol 2007 winner is a prominent personality that emerged from this season, and today we see him work as a host, actor, and commentator.

The victory of the Indian idol season 3 winner also reignited the political aspirations of the people of Darjeeling and called for a separate state of Gorkhaland. Media also said that the campaign grew huge, and the total votes for Tamang ‘Pahar ka Gaurav’ were unusual ten times more than Amit Sana’s.

After the surpassing success of Indian Idol’s first season, Season 2 started with great thrill and aspirations. There was a wave of talented singers, including the famous Neha Kakkar, Monali Thakur; however, they couldn’t win the show. But a Rajasthani boy Sandeep Acharya became the Indian Idol season 2 winner. He did not have a very successful singing career, yet he sang few Bollywood and Rajasthani songs. In 2013, everyone was shocked by the news of his death because of Jaundice.

The first Indian Idol winner is Abhijeet Sawant, who can forget his song ‘Mohabbatein Lutaunga.’ Not only Indian Idol, but he also took 3rd position in the Asian Idol contest held in Jakarta and was a runner-up in Jo Jeeta Wohi Superstar. He is a well-known singer who has sung for many Bollywood movies. This season also introduced the audience to Rahul Vaidya, who is in the news after becoming a famous contender for Bigg Boss 14 winner.

Abhijeet did not limit himself to singing alone; rather, he tried many work areas. He joined Shiv Sena but is presently not active in politics; he acted in the movie Lottery (2009), hosted Indian Idol season 5, and participated in Nach Baliye 2008. Now he is trying to be connected with his fans through social media and planning to start his reality show on digital platforms.

The fans of Indian Idol viewers are waiting to see the winner as the singing reality show has come up with its new season. Like in previous seasons, the judges’ panel of Indian Idol 2022 are Neha Kakkar, Vishal Dadlani, Himesh Reshammiya and host is none other than Aditya Narayan. The auditions of the show began on July 2022 and the premiere date of Indian Idol season 13 was 10 September 2022.

Indian Idol is a platform for budding singers looking for one break. Many talented singers come for an audition, but only a few can make it to the show. The competition gets tough with every episode, and eventually, there is only one who lifts up the trophy. This blog will find the Indian Idol all-season Winner list and runner-up, prize money, and more. We hope you enjoyed the blog.

LV Revanth won Indian Idol Season 9 (2017). He is a singing superstar of the South, and you can know more from the blog above.

3. Who is the Indian Idol season 1 winner and runner-up?

Abhijeet Sawant won Indian Idol season 1, whereas Amit Sana was the Indian Idol runner-up. You can know more about him in the blog.

No, Neha Kakkar was not a winner of Indian Idol, but she participated in season 2

Sourabhee Debbarma was the Indian Idol winner for season 4, which aired in 2009.

7. How did the Indian Idol 2 winner die?

Sandeep Acharya, the winner of season 2, died because of Jaundice at a hospital in Gurgaon.

Sunny Hindustani was the latest addition to the winner list of Indian Idol in 2019.

9. Who were the Indian Idol 3 finalists?

Prashant Tamang, Amit Paul, and Emon Chatterjee were the finalists for Indian Idol.

10. Who was the Indian Idol season 10 winner and runner-up?

The winner of Indian Idol 10 was Salman Ali, whereas the first runner-up was Ankush Bhardwaj.

11. What is the Indian Idol season 2 winner and runner-up?

13. Whose names are on the Indian Idol Junior winner list?

The winner of Indian Idol season 13 is yet to be announced however you can watch all its latest episodes on the Sony channel.

15 Best Shopping Places in Delhi to Shop in Budget
List of Sports Channels in India & No. on Leading DTH