9 States with the Longest Coastline in India

All Posts / Travel / 9 States with the Longest Coastline in India 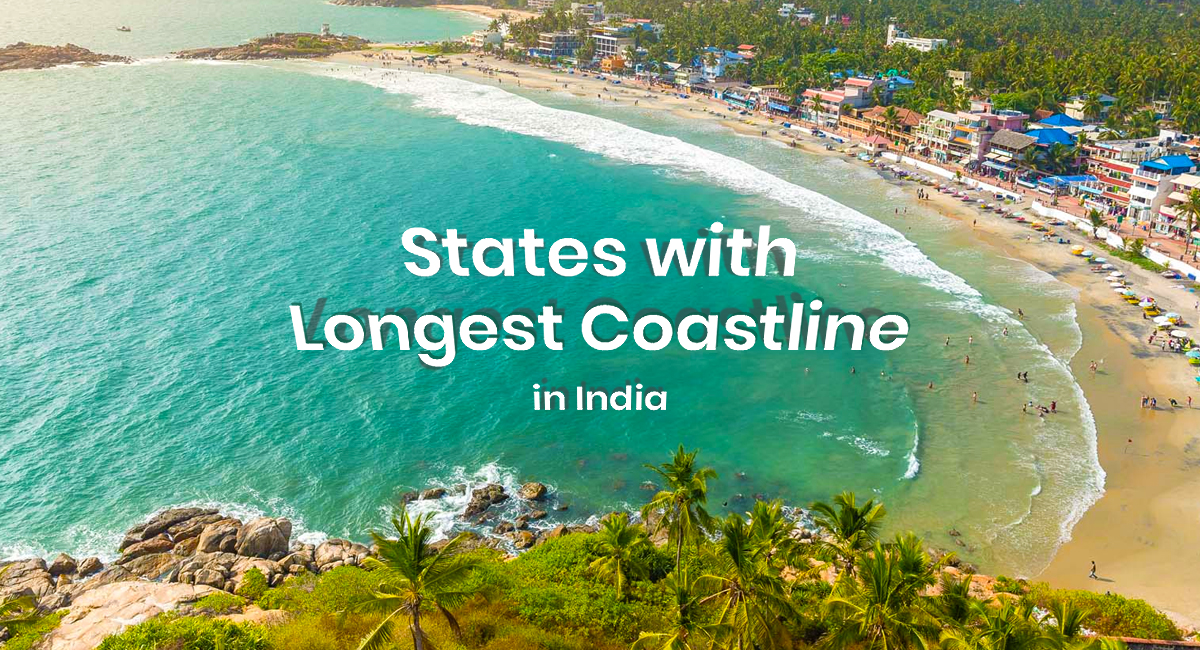 Gujarat is one of the states with the longest Coastline in India, with 24% of the Indian sea coast. It lies in the Kathiawar region and stretches till the Arabian Sea. Gujarat boasts 41 seaports, amongst which is one is major, 29 minor and 11 intermediate. The state also has some of the mesmerizing beaches that are Nagoa beach, Dwarka Beach, Mandvi Beach, Porbandar beach, and Devka Beach. The Gulf of Kutch is well known for islands like Jamnagar coast, Marine National Park and Gulf of Khambhat is the starting point for Narmada, Tapti, and Sabarmati River, and estuaries.

Located on the Southeast coast of the Indian Peninsula, the Coastline of Tamil Nadu is a part of the Coromandel Coast of Bay of Bengal and the Indian Ocean. The coastline of the state features seaports such as Tuticorin and Chennai, fish harbours, a natural urban beach, and the Gulf of Mannar Marine National Park.

The coastline of Andhra Pradesh is located on the Southeast coast of the Indian Peninsula. Along with the waters of Bay of Bengal, the coastline forms a part of the Coromandel Coast. With a length of 975 km, Andhra Pradesh is one of the Indian states with the longest coastline of the sea in India after Gujarat and Tamil Nadu. The Coastal of the state has Konaseema (a group of islands), bird and wild sanctuaries, sandy beaches, seaports, and estuaries.

Length of the Coastline: 975 km

You might also interest: Longest Railway Bridges in India

Length of the Coastline: 720 km

Kerala state is situated between the Arabian Sea Western Ghats and features beautiful coffee plantations, landscapes, lighthouse beaches, brackish water lakes along with river estuaries. The state is also one of the popular tourist destinations and temple festivals. Kerala covers 1.18% of India’s landmass, which makes Kerala one of the states with the longest sea in India.

Length of the Coastline: 580 km

The state Odisha features 485 kilometres of the coastline with the Bay of Bengal. Also called Utkal Plains, it is formed by many deltas. It has beaches like Gahirmatha, Chandipur, and Gopalpur on the sea with the mangrove ecosystem. It also features the largest coastal lagoon in the country called Chilika Lake.

Coastal Karnataka or Kanara coast stretches over 320 km in the district of Dakshina Kannada. The state comprises coastal districts of Udupi and Kannada and eight beaches. Three of the coastal Kanara are surrounded by the Arabian Sea and the Western Ghats. With an array of tourist spots and exclusive cuisine, Karnataka is one of the most visited tourist places in Southern India.

Length of the Coastline: 320 km

The state of West Bengal is one of the states with the longest coastline in India. The state extends from the Himalayas to the Bay of Bengal. The state also comprises the most extensive mangrove forests and an array of fauna. Also, it is home to one of the endangered animals of the country, which is the royal Bengal swamp tiger.

Length of the Coastline: 210 km

Situated on the south-western coast of the country, Goa has one of the smallest Coastlines in India. The city boasts some of the iconic beaches like Baga, Anjuna, Calangute, Palolem Beach, and many churches, which makes it one of the ideal tourist places in the country. Goa is formed in the Konkan region and is geographically separated from the Deccan highlands by the Western Ghats. It is surrounded by Karnataka to the east and south and Maharashtra in the north.

Length of the Coastline: 160 km

Here is a list of the 9 Indian states with the longest coastline of the sea. These states boast many tourist attractions and water bodies that make them the best tourist places in the country. In a vase, you have visited the above-listed states; do share your experience with us.

1. Which state has the longest coastline in India?

Gujarat has the longest coastline with 1600 km. of length.

2. Which state has the shortest coastline in India?

Goa is the shortest coastline amongst all with 160 km of length in India.

3. Which state has no coastline in India?

Delhi, Haryana Madhya Pradesh, Jharkhand, and Chhattisgarh do not have a coastline in India.

4. How many states have a coastline in India?