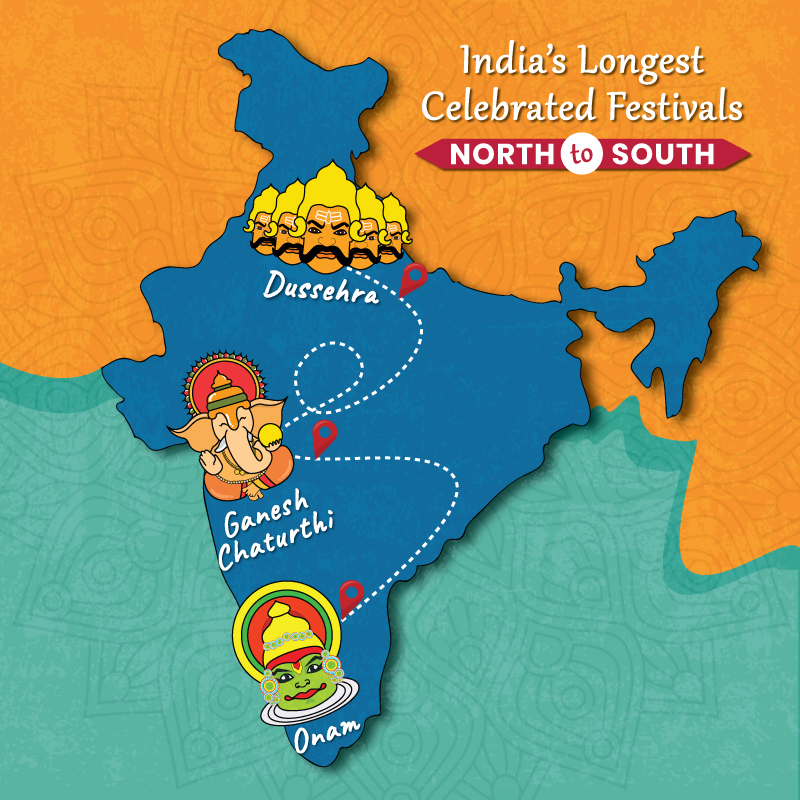 India is home to festivals. Each festival is important and is celebrated in different ways across the country. Holi and Diwali are emblematic festivals of India. Many other festivals are celebrated with equal enthusiasm and zeal, and many of them are celebrated extensively. Here we have curated the widely celebrated, most loved three festivals in India. And this is the best time to travel across India to enjoy the festivities.

Before you plan your trip to different parts of the country, you need to book flights/train, & hotel tickets. If you want to keep yourself away from the hassles, reach out to online portals like Agoda, MakeMyTrip, Goibibo, and Travelguru. You should choose MakeMyTrip for online flights and hotel bookings to avail best deals. Do not forget to check out MakeMyTrip discount coupons to make your journey budget-friendly.

One of them says Goddess Parvati asked her son Vinayak to guard her door while she takes a bath. Meanwhile, Lord Shiva came and protested Vinayak to let him go inside and meet the goddess. When Vinayak did not agree with him, this God, Shiva got angry and severed his head. On seeing this, Goddess Parvati asked Shiva to get her son back. Lord Shiva sent his man on earth and asked him to get the head of a person or animal he saw first on the land. The man got elephant’s head, and Vinayak got his life back with an elephant head.

Ganesha has more than 100 names, amongst which Vinayak, Ganpati, and Lambodar are famous among the mass.  During the ten-day festivals, four main rituals are Pranapratishhtha, Shhodashopachara, Uttarpuja, and Ganpati Visarjan. The celebration begins with Pranapratishhtha to infuse the deity into the idol, whereas Shhodashopachara means paying tribute to the lord in 16 different forms. Devotees can shift the idols after Uttarpuja, and on the last day people bid him adieu with a heavy heart.

People celebrate this festival in Maharashtra and many other parts of the country. Devotees decorate the huge Pandals, worship Lord Ganesha’s idols, and offer him his special sweet, Modak.

Onam is Malayalis traditional festival. It is an annual harvest festival that falls at the end of August or in the beginning of September, also known as the first month of the Malayalam calendar- Chingam. This is one of the longest festivals celebrated for ten days. People wear new dresses, decorate their homes with lamps, and many music and dance events take place to celebrate the festival. People sing the traditional song Onappaattu and celebrate the festival with great enthusiasm.

The festival is celebrated in honor of Mahabali, who once ruled the state. During his era, people were happy, and the state enjoyed great prosperity and wealth. The golden age ended with his death. On seeing his honesty and generosity, Lord, Vishnu granted him a wish that every year he can visit his kingdom.

To mark the celebration, people lay a flower carpet called Pookalam outside of their house to welcome the king and lord Vishnu. Festivities like snack boat race, Kaazhchakkula, Kaikottikkali, Puli Kali and Onappottan, and many more rituals are performed. The ritual is concluded with Onam Sadya. The dishes are served on the banana leaves, consisting of 4 different dishes and rice along with its traditional pickle, papadam, and a dessert-Payasam. The ten days of festivals have different names such as Atham, Chodi, Chithira, Vishakam, Thriketa, Anizham, Pooradam, Thiruvonam, and Uthradom.

This Hindu festival is celebrated to mark the victory of Lord Rama over devil Ravana. The day is marked on the 10th day of Shukla Paksha and is widely celebrated in North India. Lord Rama was exiled for 14 years; he left his kingdom with his wife Sita and brother Lakshman. They started living in a village, where the Devil Ravana saw Sita, and he abducted her. The king of Srilanka, Ravana, took Sita in his country.  Lord Rama, along with his supporters-vanar sena, traveled to Sri Lanka and killed Ravana.

Ravana was one of the most intelligent humans on the land. He was blessed with ten heads and a blessing that nobody can kill him. However, Lord Rama killed him; thus, the day is also known as Vijayadashami.

To celebrate the day, people perform different rituals, and during the ten days, the story of Ramayana is showcased in the form of plays called Ramleela. On the last day, the effigies of Ravana, his brother Kumbhkarana and son Megnatha are set on fire. The festival has different importance throughout the country.

Dussehra is a culmination of Navratri, which means nine days. Each day is associated with different forms of Goddess Durga. In north India, Ashtami and Navami (8th and 9th day) are celebrated as Kanya puja, where little girls are offered food and gifts. In Bengal, the same days are celebrated as Durga Puja whereas in Gujrat, it is marked as dandiya nights.

India is known for its festival. Each state has its traditional festival, celebrated with enthusiasm and vigor. However, there are primarily three festivals which are celebrated for ten days which are Ganesh Chaturthi, Onam and Dushhera/Vijaydashmi.