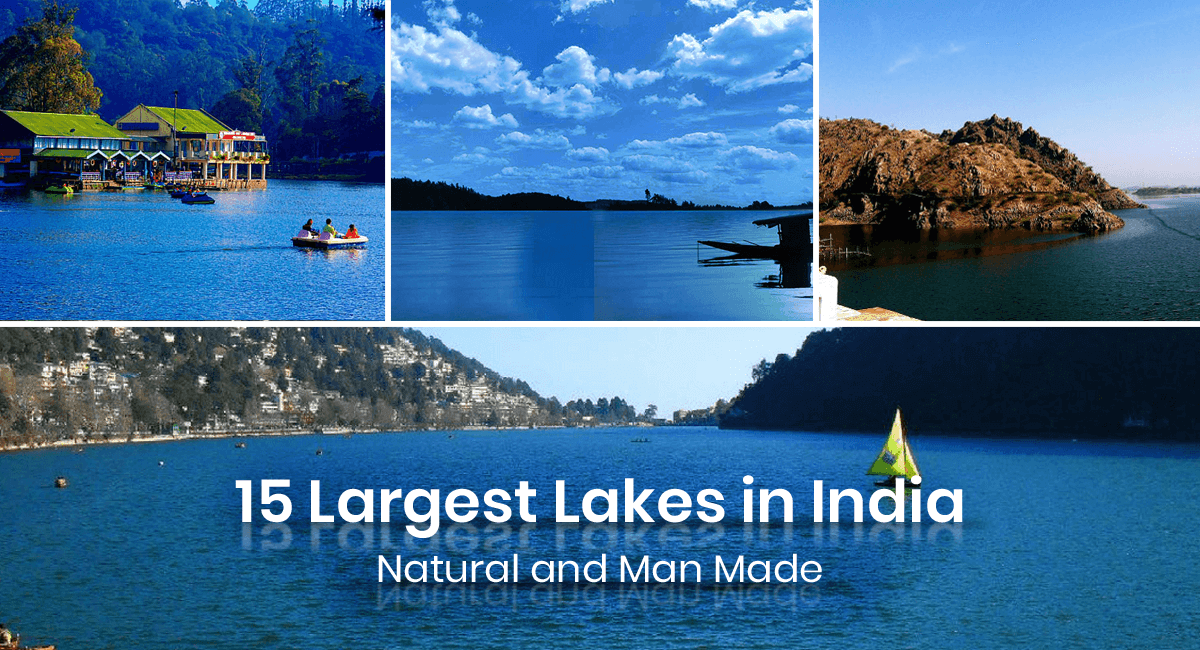 From Kashmir to Kanyakumari, our country boasts many water bodies that include lakes. India has many largest lakes, amongst which some are man-made, and some are formed naturally. These lakes have fresh saline water, which can be used for irrigation purposes. In this blog, we have curated the largest lakes in India that one should explore at least once in a lifetime. Scroll below to find out the list of natural and artificial lakes in India.

One of the most prominent names of the manmade lakes in India is Vembanad Lake. It is the longest and largest man-made Lake in India. The Lake is enveloped by many districts that include Allapuzha, Kottayam, and Ernakulam. Vembanad Lake is known for bird watching, house boating, and photography. Every year snake boat race takes place on this Lake. The race is named Trophy Boat Race. It is named after the first PM of the country, Jawaharlal Nehru. The ideal time to visit the Lake is winter, as you would be able to explore different species of birds.

Chilika Lake is one of the largest lakes in India. It is made of approximately 52 streams, further creating the largest coastal lagoon in India and the second largest in the world. During winters, the land becomes the main hub for migrating birds. The Lake is surrounded by Nalaban Island, which is one of the significant site attractions for tourists. Besides, there are other islands, such as Breakfast island, Bacon Island, Honeymoon Island, and many others to name, where you can visit along with friends and family. If you are lucky, you might spot Dophin in the Lake.

Also called Shivsagar Lake, this Lake was formed by damming the Koyna River. The Lake is an ideal picnic spot. It is a well-known lake in Maharashtra. Its length is 50 km.

Indira Sagar Lake is one of the natural and man-made lakes in India. It is the second-largest power source in the country that provides water to the villages around. The lake is formed by the water of the Narmada River.

Pangong Lake is an endorheic lake (the water of the Lake does not outflow to oceans or rivers) It extends from India to China. The Lake freezes entirely in the winters. So the ideal time to visit the Lake is May to September. The banks of this Lake are popular camping spots. What makes this Lake different from other lakes is that as the sun changes its position during the day; you would be able to see different colors of the Lake.

Considered one of the largest natural lakes in India, Pulicat Lake is brackish in nature-It is salty, and at the same time, the water of the Lake is fresh. After Chilika Lake, it is the second-largest lagoon in India. It nestles between Tamil Nadu and Andhra Pradesh. The Lake is primarily dedicated to activities like fishing and bird watching. During autumn and spring, you will find here an array of different birds species. The place is apt for vacation since there are many resorts around, where you can stay and enjoy nature. Also, you can explore the villages around.

Sardar Sarovar Lake is another name on the list of the largest lakes in India. It is formed by the dam surrounded by the Narmada River. It is one of the best tourist spots as there are many attractions and monuments located. One of the main attractions of the place is the tallest statue- the Statue of Unity. Soon, tourists would enjoy numerous sports like paragliding, boating, river-rafting, trekking, and many others to name.

The world’s largest masonry dam forms Nagarjuna Sagar Lake. The lake was constructed as an initiative for Green Revolution and hydroelectricity production in the country. This picturesque Lake has become one of the perfect weekend gateway destinations from Hyderabad. It is also close to  Ethipothala Falls. Tourists here can enjoy numerous activities, like boating.

Lok Tak Lake is the largest Lake in Northeast India that contains freshwater. The Lake is famous for the phumdis – a heterogeneous mass of soil, vegetation, and organic water that floats around. The Phumdi is home to the largest floating national park in the world, which is called Keibul Lamjao National Park. On every 15th of October, Loktak Day is observed near the Lake. You will find many migratory birds here

Considered to be one of the biggest man-made lakes in India, Wular Lake is known for its beauty across the country. The Lake is also famous for terrestrial birds such as Common Cuckoo, Himalayan Monal, Himalayan Woodpecker,  and many others to name. One can also go for various water sports like boating, and skiing on the Lake.

It is one of the largest freshwater lakes in the country and the largest shallow freshwater Lake in Asia. The Lake gets the water from seasonal Tammileru and Budameru streams. It is also connected to the Godavari and Krishna irrigation systems. The Lake is among the ideal tourist attractions in Andhra Pradesh. In the year 1999, the Lake was declared to be a wildlife sanctuary.

One name on the list of artificial lakes in India is Dhebar Lake. It is the second-largest human-made (artificial Lake). The Jaisamand Wildlife Sanctuary surrounds the Lake. Dhebar Lake also boasts three islands. The Lake has a dam with the same name. The Dhebar Marble Dam is amongst the Heritage Monuments of India.

Ashtmudi Lake is the most visited Lake in Kerala. It has a unique wetland ecosystem and a vast water body in the shape of a palm. Ashtmudi Lake is also known to be a gateway to the backwaters of the state. It has backwater resorts and houseboats that make it an ideal spot for tourists.

Bhojtal was formerly known to be Upper Lake. This Lake is the primary source of drinking water for the city. It also is known as Bada Talab- it serves 30 million imperial gallons of water. Bada Talab, along with other small Lake-Chhota Talab, makes Bhoj Wetland.

It is the second-largest Lake in Jammu & Kashmir. Dal Lake is an integral part of tourism in Kashmir and is known to be the Lake of Flowers. Moreover, it is a primary source for commercial operations in water plant harvesting and fishing.

If you are planning to retreat by visiting a place around the water body, consider the list of natural and artificial lakes in India mentioned in this write-up. There are many largest lakes in India that are known to be the country’s pride. These lakes offer irrigation facilities to nearby places and are perfect for a quick trip with family and friends.

FAQs About Largest Lakes in India

1. Which is the largest man-made lake in India?

2. Whether Chilika lake is natural or artificial?

Chilika lake is a natural lake and is considered on the top-most list of the largest lakes in India.

3. Which is the largest artificial lake in India?

4. Which lake is considered the largest natural lake in India?

Wular lake in Jammu & Kashmir ranks in number one position on the list of largest natural lakes in India.