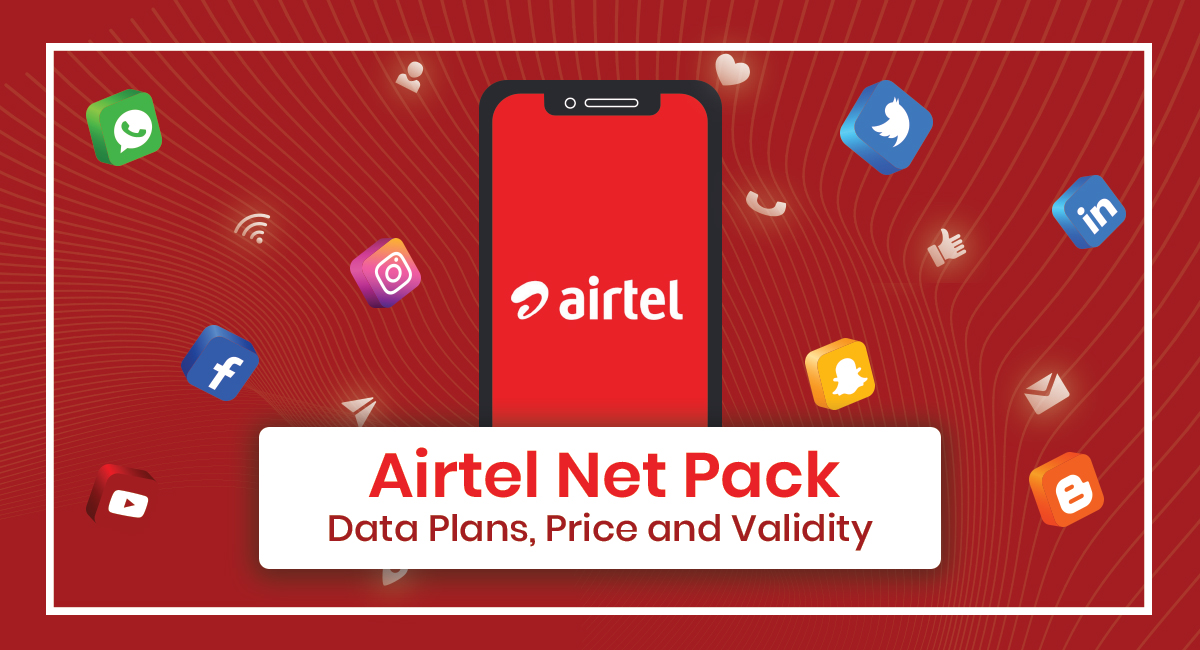 Bharti Airtel is one of the largest telecom service providers in India, with 403 million active users. The company serves in 20 countries in Asia and Africa and has 22 telecom circles in India. It provides the 2G, 3G and 4G services across the nation. With the advent of new technology, Airtel is among the forerunner in the 5G network in India. It offers mobile commerce services, high-speed broadband, Airtel Net Pack and Airtel DTH services.

Among all the services mentioned above, Airtel is best known for its internet services, including 3G and 4G services. If you are looking for excellent internet connectivity at affordable cost and plenty of benefits, then you are in the right place. This blog has listed all Airtel net pack offers with validity, data you get, and recharge cost. All the mentioned plans are only for prepaid users; if you want to convert postpaid to prepaid, Airtel allows the users to do that. So, go through the plans and enjoy the high-speed net connection.

In the list below, we have curated the most commonly used Airtel Data Recharge option by the active users. All the mentioned plans come with unlimited local and national calls with 100-300 SMS, free access to Wynk Music, and Airtel Xstream. Go through the list and pick the recharge options best suited for your needs.

There are three options for 1.5 GB of daily data usage. If you exhaust the data, wait for midnight to get another 1.5 GB credited in your data account. Airtel also gives plenty of benefits to its users, as listed below.

There are four recharge options for Airtel net pack. You can go through the table below and get your number recharged with best-suited options. However, these plans may not be useful for your dongle. In that case, look for specific Dongle Plans.

Airtel gives two options for 3GB daily internet usage. We have also mentioned the total data you would be getting until the validity ends. Many times we wonder how much data have we already consumed. If this is the case with you, check the Airtel USSD code to get all the important information on your mobile.

Airtel Data Pack also allows users to opt for long term prepaid plans. In this season of Work from home, we need consistent and stable internet connectivity. Airtel knows your need, and the following data plans will satisfy your data demands.

Airtel high-speed 4G network comes in a range of recharge costs. The table below shows Airtel net pack options with validity, while some can be used as additional data on already active plans. If you are using Airtel hotspot devices for the internet, then go through Airtel hotspot plans as well.

When the telecom companies are in the rat race for getting more users, the benefits lie in the court of users. Airtel gives many additional benefits with every recharge. There are specific Airtel data plans, SMS packs, and unlimited call plans. Following is the list of internet packs that come with total internet data rather than data per day.

Airtel is the second-largest telecom service provider. There are millions of users with different internet needs. Therefore, Airtel has all kinds of recharge plans to cater to its users. If you need a two-day internet pack, 3 GB/day net data, net validity of 84 days, Airtel has it all. You can get your number recharged with the Airtel net pack which suits you the best. In this blog, we have listed the recharge plans according to 1 GB/day, 1.5 GB/day, 3 GB/day, long-term data, 4G net packs, and other data packs. These segregated lists will give you a clear picture of what you are actually paying for. So, go through the list carefully before you choose your Airtel internet pack. However, if you have any issue with the recharge process of invalid data consumption statics, you can reach Airtel Customer care for assistance and support.

Airtel gives the recharge option of Rs.219 for 1 GB/day. This comes with the pack validity of 28 days, unlimited calling, free subscription of Airtel Xstream and Wynk Music.

2. How to check the validity of Airtel Net Pack?

You can use the Airtel USSD code to check your validity instantly. The important information of active plans can be checked on Airtel Thank You App and through the website as well.

3. Which is the best data plan with 2GB data per day?

You have four recharge options for 2GB/day data. Recharge with Rs.298, which gives you 2 GB daily data, unlimited calling, and an SMS pack. If you recharge with Rs.449, you get the same benefits for 56 days. There are two more options under this section, so go through the list above.

You can recharge with Rs.251 to get 50 GB data instantly. However, it is only for the users who have any 4G active plans.

5. How much is for Airtel yearly data plan?

Airtel offers two options for yearly plans. One is great for heavy internet users, while the other is good for the basic internet user. If you recharge with Rs.2398, you will get 5475 GB in total, along with other benefits. If you recharge with Rs.1498, you get 2 GB/month, 24 GB in total, with other benefits. For more information, go through the table above.