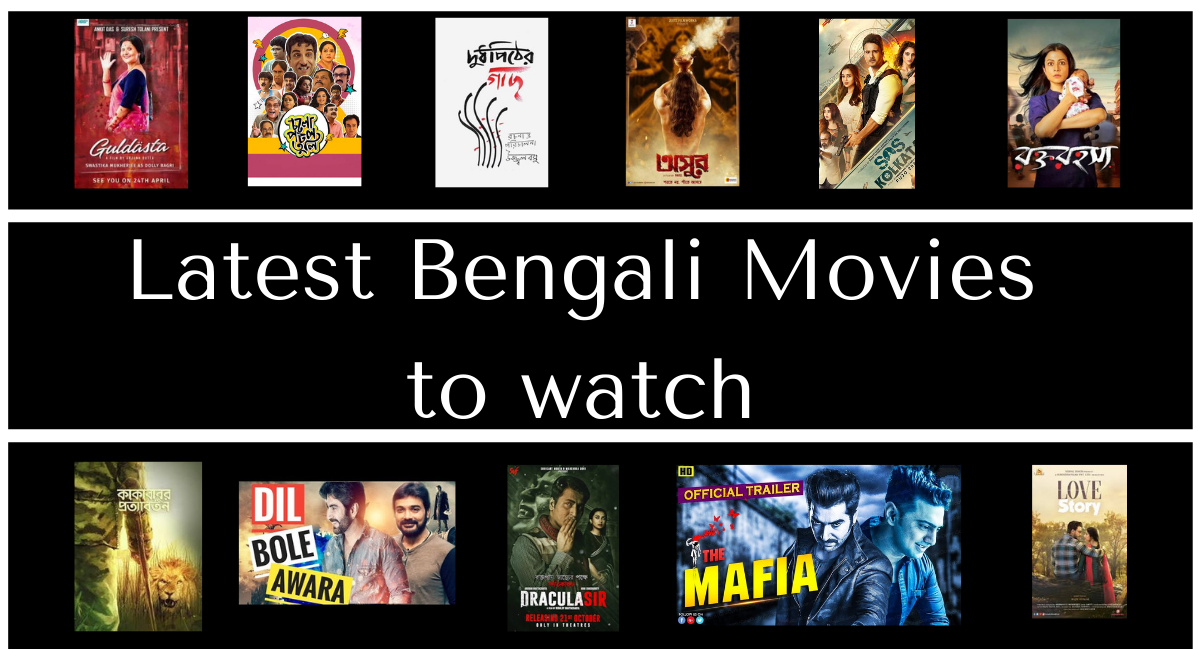 Bengali Cinema, also known as Tollywood, was a historically primary film industry. It was the Bengali film industry that gave way to parallel cinema and art films in the 1950s. Eminent Bengali directors like Satyajit Ray, Ritwik Ghatak, Sandip Ray, and many others have made Bengali cinema proud.

Like every year this year, too, Bengali filmmakers have come up with some of the amazing pieces that recently hit the theatres. Many of the new Bengali movies have grabbed eyeballs because of their rich content and stellar star cast. And, there are many Bengali movies yet to release that was already garnered a massive fan following. Scroll down to have a look at the latest and upcoming Bengali movies

The first in the list of new Bengali movies is the recently released Switzerland. It is a light hearted movie that depicts the challenges faced by the middle-class family. The couple- Shibu (Abir) and Rumi (Rukmini), plans a holiday trip to Switzerland. As the story unfolds, they face many financial challenges. The movie’s story is quite engaging, and lead actors, along with kid artists, have played their parts very well. The film will make you laugh and emotional at the same time.

Saheber Cutlet is one of the recently released Bengali movies. The movie is a success at the box office. The story revolves around a Chef-Ronojoy, who plans to move to Paris and start his own business. In order to finance the business, he plans to sell his ancestral property. To his surprise, an unknown family leaves on his property.

Ronojoy plans to get rid of them; however, it fails at the time. It is a happy movie; its strength lies in performance and simplicity. The film also pays homage to the Bengalis who are open to different cultures.

Guldasta is one of the new Bengali movies that has hit the theatres in October. It is a women-centric film that showcases ordeals faced by three different women-Dolly, Renu, and Srirupa. The movie explores the realities of life. This simple and sweet story will definitely touch your hearts. Do watch the film in the theatre near you.

Released on the day of Durga Puja, Rawkto Rawhoshyo narrates the story of a girl who has been brought up by her grandmother. The movie highlights the relationship of the mother with her child and, in a way, sends out the message that good wins over evil.

SOS Kolkata is a recently released Bengali movie. The film is based on a suspected terrorist attack. While the movie’s story is not much convincing, however, the actors made it a hit show, all thanks to their actions, which do not look over the top. All the actors including Yash, Mimi, and Nusrat, have done a fair job.

Cholo Potol Tuli is one of the latest Bengali movies that is loosely inspired by the story of Shibram Chakraborty (Bengali writer and revolutionist). It is one of the best comedy movies in Bengali Cinema. The film is about acentric men who fear having a disease called BeriBeri through his neighbor. In order to prevent the health problem, he takes all the precautionary measures that he could. His antics will make surely make you roll in the aisles.

Asur pays tribute to the well-known Indian sculpture and painter- Ramkinkar Baij. It revolves around the sculpture that aims to make the biggest idol of goddess Durga; however, is disgusted by the series of circumstances. The hero of the movie is the story itself. This action thriller is a delight to watch.

Dracula Sir is a new Bangla movie that was released during Durga Puja. The movie justifies the title name –Dracula. It is a story about a teacher- Raktim, who is teased by others for having teeth like Dracula. Ridiculed by the conditions, he plans to take revenge. The movie jumps from one era, which is present-day, to the 70’s era, showing you two different stories with same leads.

Dracula Sir is also a tale of finding revenge. To know what happened with Raktim, watch the movie in the cinema hall.

Doodhpither Gachh is one of the best Bengali films. The story concentrates on a seven-year-old boy with a speech impairment. He believes that sowing a rice cake will lead to rice cake tree and so indulges in a fantasy world. Unknown to reality, the boy leave his home in order to visit the land of his dream.

It is a simple story that has touched many hearts. The highlight of the movie is the child artist Harshil Das. He will make you laugh at his cute antiques, and at other moment he will leave you teary eyes with the emotional scenes.

The recently released Love Story revolves around three friends who subsequently fall for each other, giving way to many misunderstandings. This is one of the sweet and breezy new Bengali movies.

Bengali film industry has given some of the best movies like Nayak, Pather Panchali, Aparajito, and many others in the past. Bengali cinema has always made the film industry proud of the kind of film they have produced so far. In this blog, we have listed all the recently released and upcoming Bengali film that one should not miss out on.