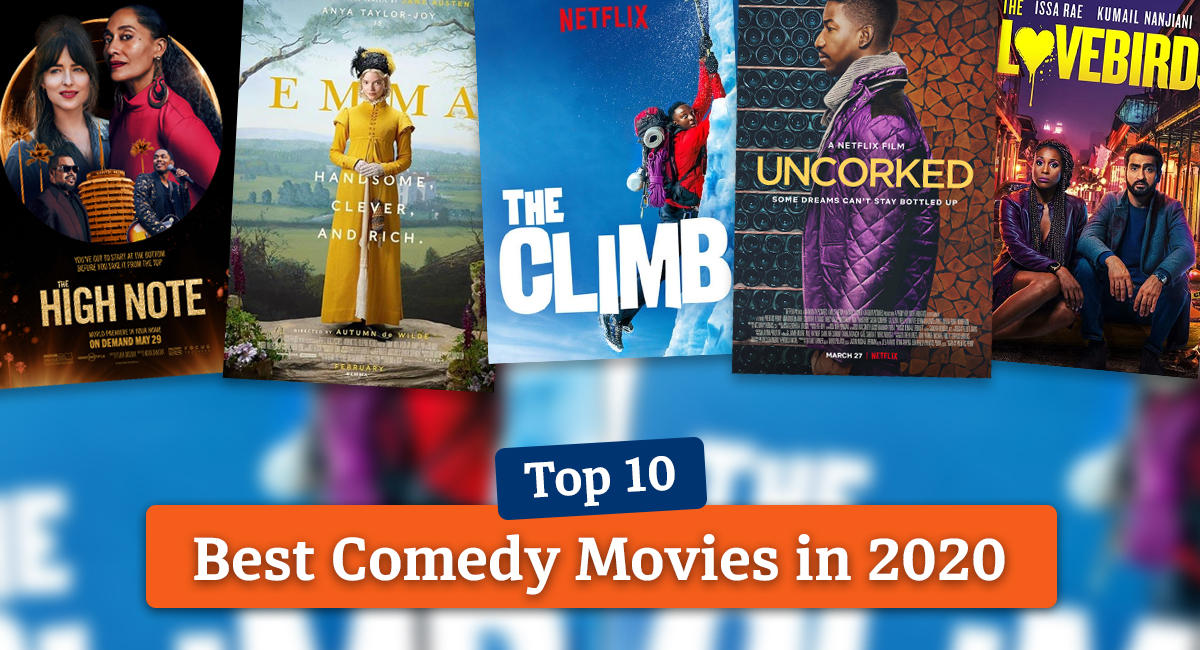 Movies and videos have transformed the entertainment industry with the changing and advancing of digital technology. With millions of options to choose from and unlimited genres and moods to select, movies always help us to entertain ourselves in the best possible manner!

Comedy and humor play a vital role in any human who wishes to have a pleasant time. The year 2020 may have brought a few bad news, but along with it arrived some fantastic comedy movies for all the movie buffs in us. All the Titles in the list look extremely promising, as we all know the coronavirus has temporarily stopped theaters, but the list of the Best Hollywood Comedy Movies in 2020 does not stop.

We all make New Year’s resolution, and if watching all the upcoming movies in 2020 was one of them, then this list is made for you. Now, sit back and relax as this roller coaster ride of laughter is about to start. Poo up those popcorns, create a comfortable and cozy place to sit, as you might have to sit for hours! No matter the genre, comedy movies have always been a favorite of every movie fanatic.

We all are well aware that laughter relieves stress and is going to last for a more extended period than expected and to lighten the mood and releases some stress, everyone deserves some quality time with family and friends with a lot of laughter and good times!

Our List of the Best Hollywood Comedy Movies in 2020!

This light and fantastic musical comedy sets in a stunning city, Los Angeles! Directed by Nisha Ganatra, this movie is based purely on this lifestyle of a superstar and her amazingly overworked personal assistant and the course of events that take place in their respective careers. With Tracee Ellis Ross as Grace Davis, Dakota Johnson as Maggie Sherwood, Kelvin Harrison Jr. as David Cliff, and much more talented artists who take away the show with their witty reactions and funny punch lines. This movie is best to binge-watch with your favorite snacks and beverages along with your friends.

This fantastic movie is based on a story of 2 best friends, Mia and Mel, played by Tiffany Haddish and Rose Byrne, respectively. With such talents on screen, the plot of the film plays around when the two friends attempt to take control of their cosmetics company from an industry titan. A fantastic depiction of today’s working class and the stereotypes they still struggle within the most comic manner, a must watch as it slides through the list of the best Hollywood comedy movies with all your office colleagues!

This movie is known as one of the best Hollywood comedy movies for its crisp comedy and the exciting punch line that plays nicely around with fascinating characters and comic action. The Cast involves talented Charlie Hunnam as Ray, Mathew McConaughey, and Mickey Pearson, Collin Farrell and the coach, and many more! Their funny cunning lines and witty answers are what you need during these harsh times to just sit back and laugh.

It is one of the best action comedies this year to date. Produced by Guy Ritchie, the Cast for this movie has the best comic dialogues and comments. Some critics might suggest that there were some racist undertones in the film, but other than that, the epic dialogue delivery plays the most cliché roles. It is a known fact that this movie was acclaimed worldwide by generating a gross amount of $36.3 million in the USA and Canada alone! It made round about $115 million worldwide and was much awaited since Ritchie’s last movie.

Emma is directed by the talented Autumn-de-Wilde about a woman called Emma Woodhouse, in Georgia. The movie is based on the 1815 book of Jane Austen with the same name. The screenplay holds the Cast of Anya Taylor-Joy as Emma Woodhouse, Johnny Flynn as George Knightley, and many more. In the movie, Emma Woodhouse tries to meddle in the life of her friends and family to make them fall in love. Emma is a fantastic depiction of English smart comedy and modern satire in medieval times. What else does anyone need? Just sit back in a cozy corner, plug in your headphones, and enjoy one of the English best Hollywood comedy movies just the way you read Jane Austen.

Starring Michael Angelo Covino as Mike, Gayle Rankin as Marissa, Kyle Marvin as Kyle, and many more, The Climb is the movie plotting around Kyle and Mike. They are two best friends, sharing a tight bond only after Mike sleeps with Kyle’s fiancée. Then comes a fun narration of their life packed with sarcastic jokes that are so funny, that it can make your tummy hurt with all that laughing!

It is a movie that correctly uses the bond between two men and how attractively engaging but yet beautifully funny life becomes when you mess things up. It makes you believe that even if you mess things up in a friendship, there still is a chance to save that bond from breaking, and situations like these can be looked upon comically. Isn’t that enough to make it to the list of best Hollywood comedy movies?

The plot of the movie is played around the storyline of a young man and his father played by Mamoudou Athie and Courtney B Vance, respectively. The plot twist emerges when Elijah makes his father upset because he wants to pursue his dream to become a master sommelier instead of working with his dad and helping him with his family barbecue business. The movie plays a beautiful drama in the most cynical and satirical manner. It has received excellent and positive reviews from the critics and holds 93% of approval rating on one of the most leading review websites known as Rotten Tomatoes with an average rating of 6.6 out of 10. It is critically acclaimed for the intricate script writing of creating a situation to dramatically transform a sad and severe atmosphere into fantastic comic timings.

Michael Showalter directs this movie wherein the screenplay is around a couple who are about to break up and get unintentionally mixed up in a bizarre murder mystery! The movie is best to watch with your special someone and enjoy a fun night with laughter and entertainment! Enjoy a fun night with friends along with the talented Cast like Issa Rae as Leilani, Kumail Nanjiani as Jibran, etc. Lovebirds is a beautiful American romantic comedy that takes a turn when things start to get more severe and funnier.

It is the story of Jibran and Leilani, who are a couple with constant bickering and arguments, decide to end their relationship. It is at this time when they somehow get involved in a murder mystery unintentionally! It is from this time when the movie just makes you laugh your heart out! It will be really interesting to see if it could beat the other movies released in 2020.

8. The Personal History of David Copperfield

The personal History of David Copperfield is the movie base on the life of David Copperfield from childhood to maturity, starring the one and only Dev Patel. The plots and twists are way more fun and the way the adventures along with the people he meets take a significant toll on his life. Directed by Armando Iannucci, the movie holds this British Independent Film Award for the Best Screenplay. However, the award for best Hollywood comedy movies in our times surely goes to it.

The world premiere of this movie was at The Toronto International Film Festival that happened on 5 September 2019 and theatrically released in the USA on 14 August 2020. The life of David Copperfield is idyllic life from childhood till date. The movie shows interactive life lessons like how David Copperfield becomes a gentleman and an author in the most fun way.

9. The SpongeBob Movie: Sponge on the Run

We all have a childhood memory watching Spongebob. Who doesn’t love the satirical comments and continuous punch lines that Squidward, Spongebob, and Patrick share! This year The SpongeBob Movie is released called Sponge on the run! This movie was awaited for long not only by the children, but even the adults were desperately waiting. The Spongebob movie was produced by Paramount Animation, Nickelodeon Movies, and United Plankton Pictures. The Mikros image has delivered beautiful animation.

The plot of the movie starts with SpongeBob and Patrick’s board on to rescue SpongeBob’s pet, Garry. Garry has been snail-snapped by the Poseidon, who are traveling to the Lost City of Atlantic City. The best part about this movie is that it holds the real history of the very first time when SpongeBob and Garry met. Watch it with friends and family, and enjoy a fun and cheerful movie night!

Onward is an American animated movie produced by Walt Disney Pictures and Pixar Animation Studios. It is directed by Dan Scanlon and produced by Kori Rae. Onward is about a world inhabited by mythical creatures in the modern day with the story of 2 elf brothers living in the city of New Mushroomton. This movie is a must-watch with family and friends to enjoy a fun evening with Ian and Barley lightfoot and their adventures!

Movies have always been a part of our entertainment industry since, like forever!, Comedy and humor are the maxima searched genres because the people are stressed and need a way to vent it out by watching something light and spending some high-quality time with family and friends.

By way of conclusion, the cinema is essential for its possibility of generating mental representations of various things, for providing an entertainment service at any time of the year regardless of the weather, for promoting technological advancement and for allowing everyone to access and apprehend various contents. In films, in general, the moral does not appear explicitly. Still, positive values such as generosity, respect, companionship, and friendship are transmitted clearly and forcefully, which represent authentic teaching for the little ones.